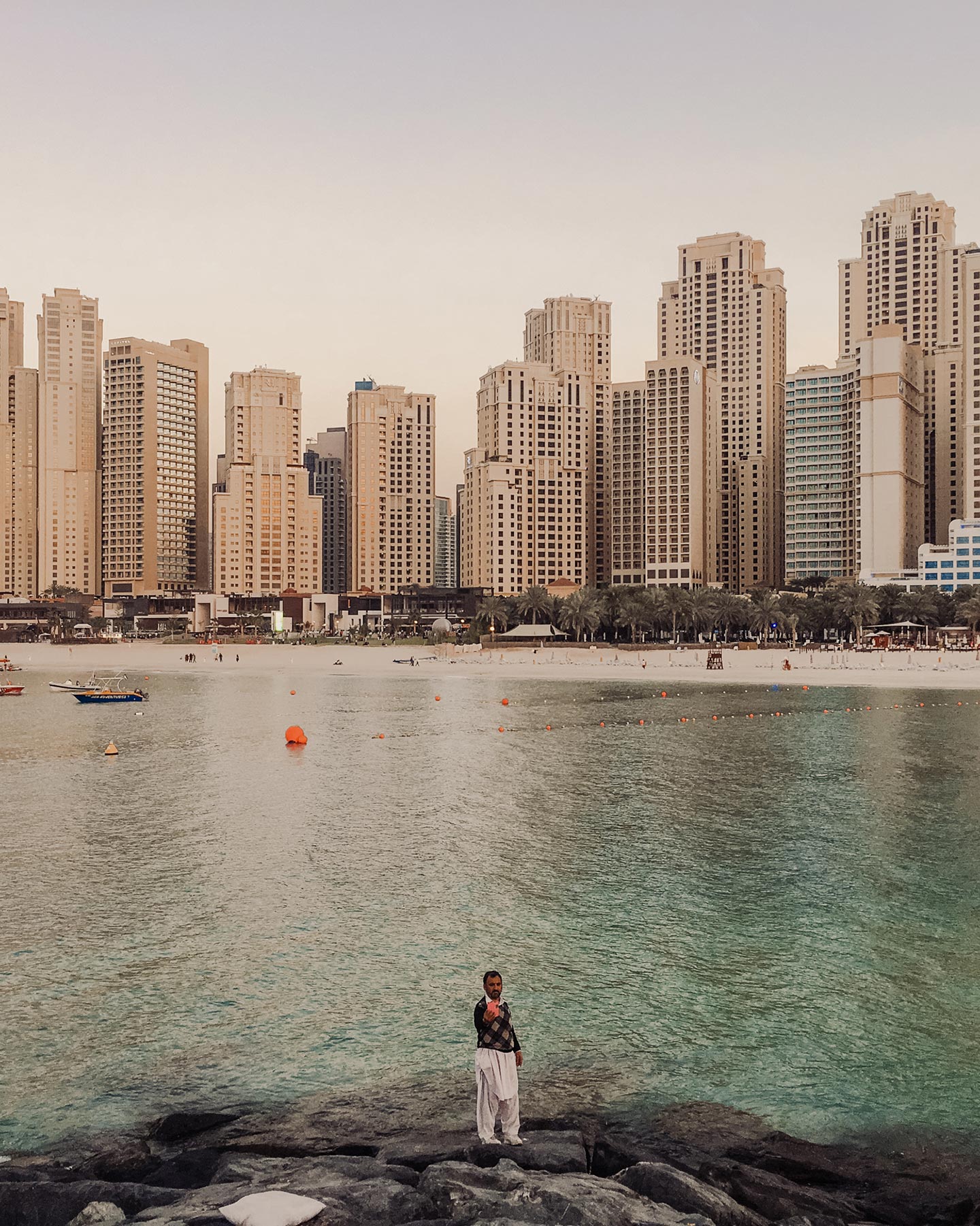 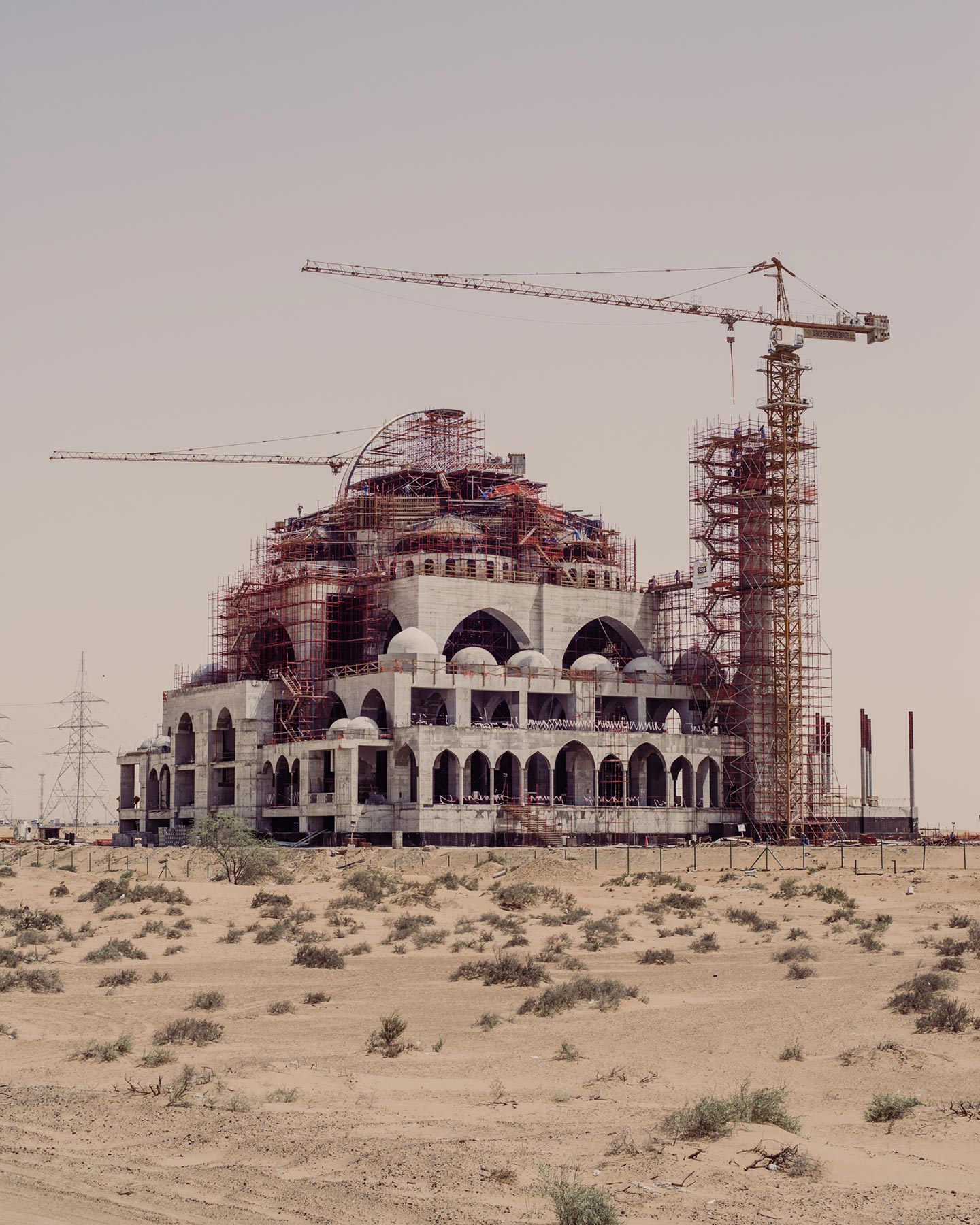 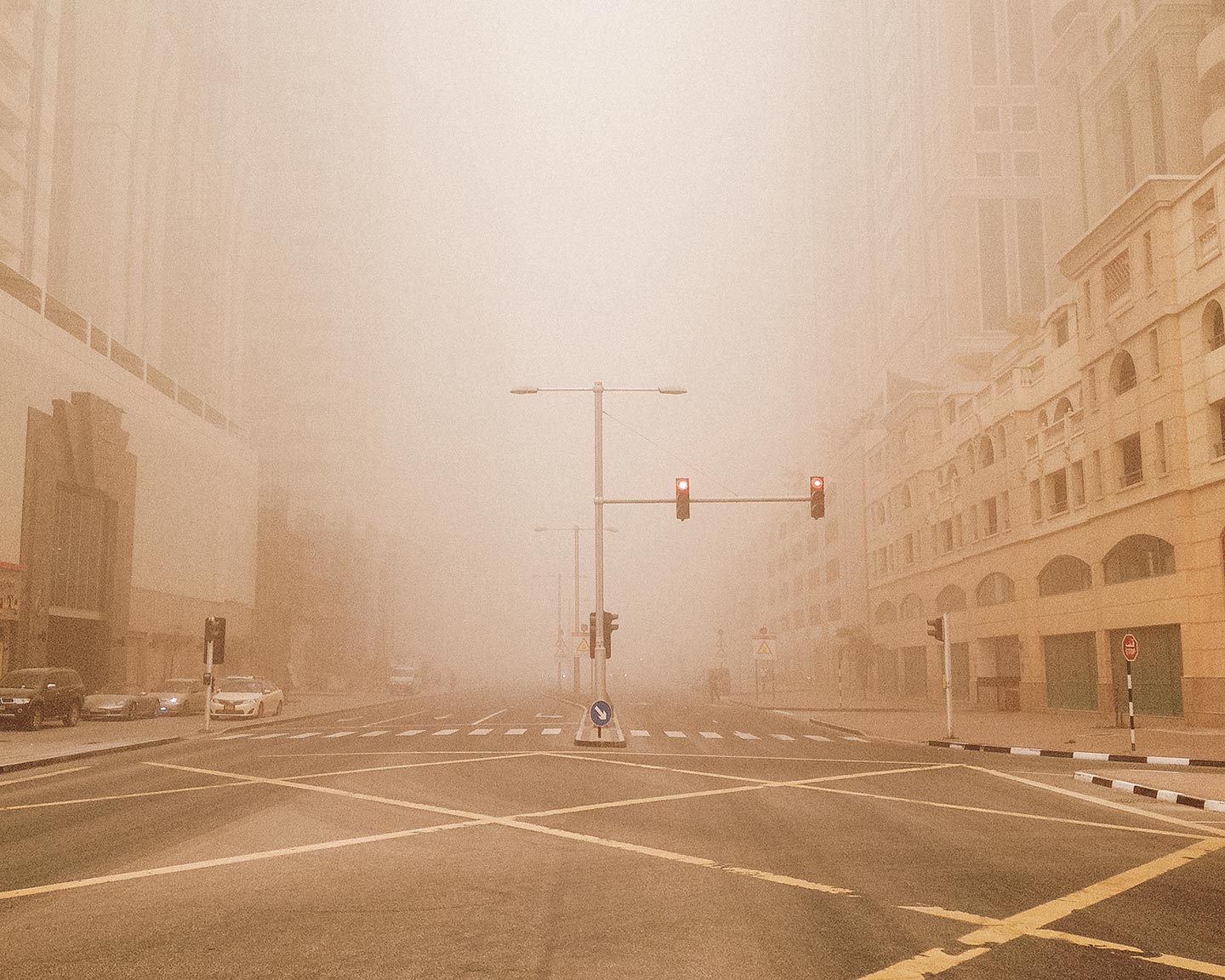 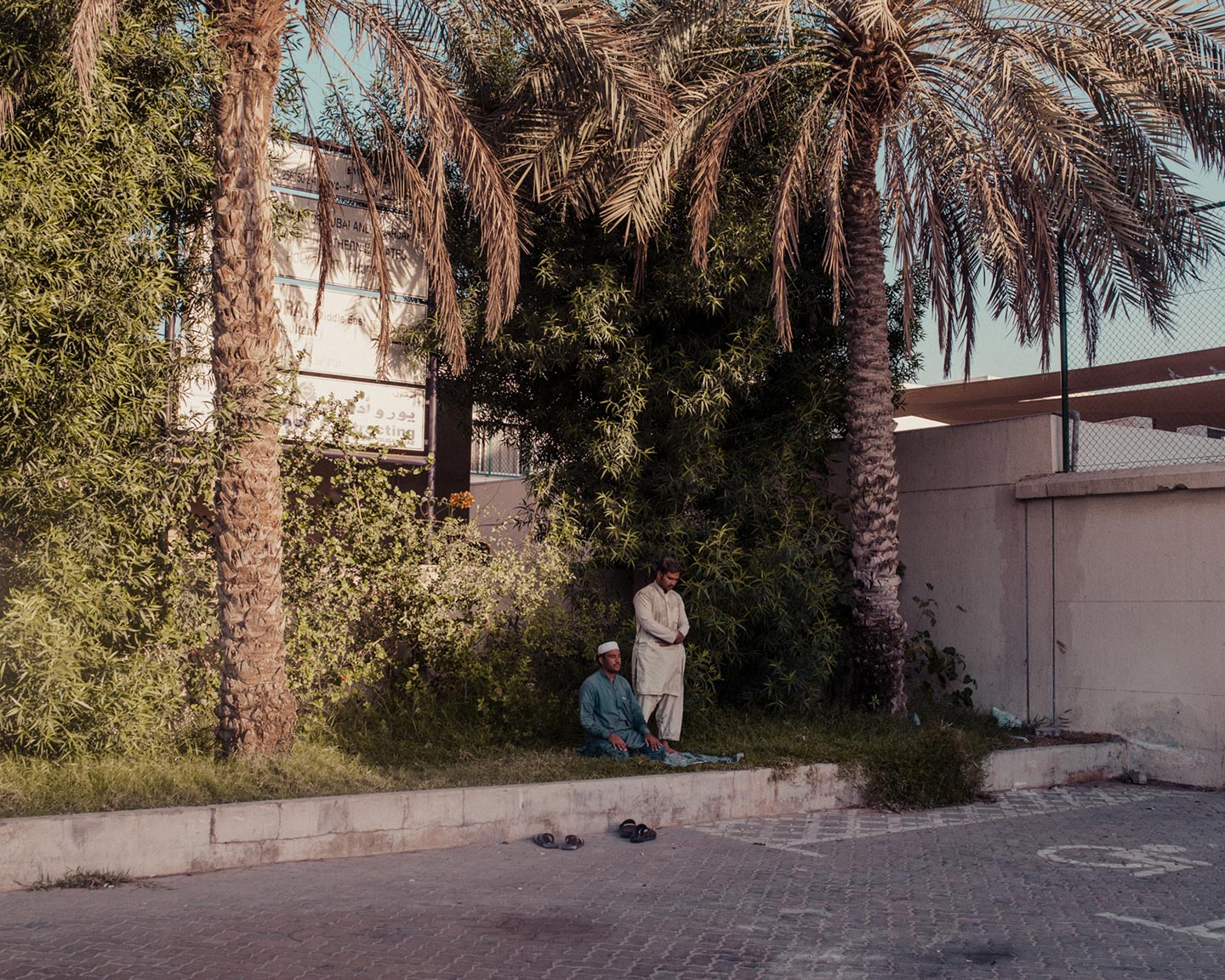 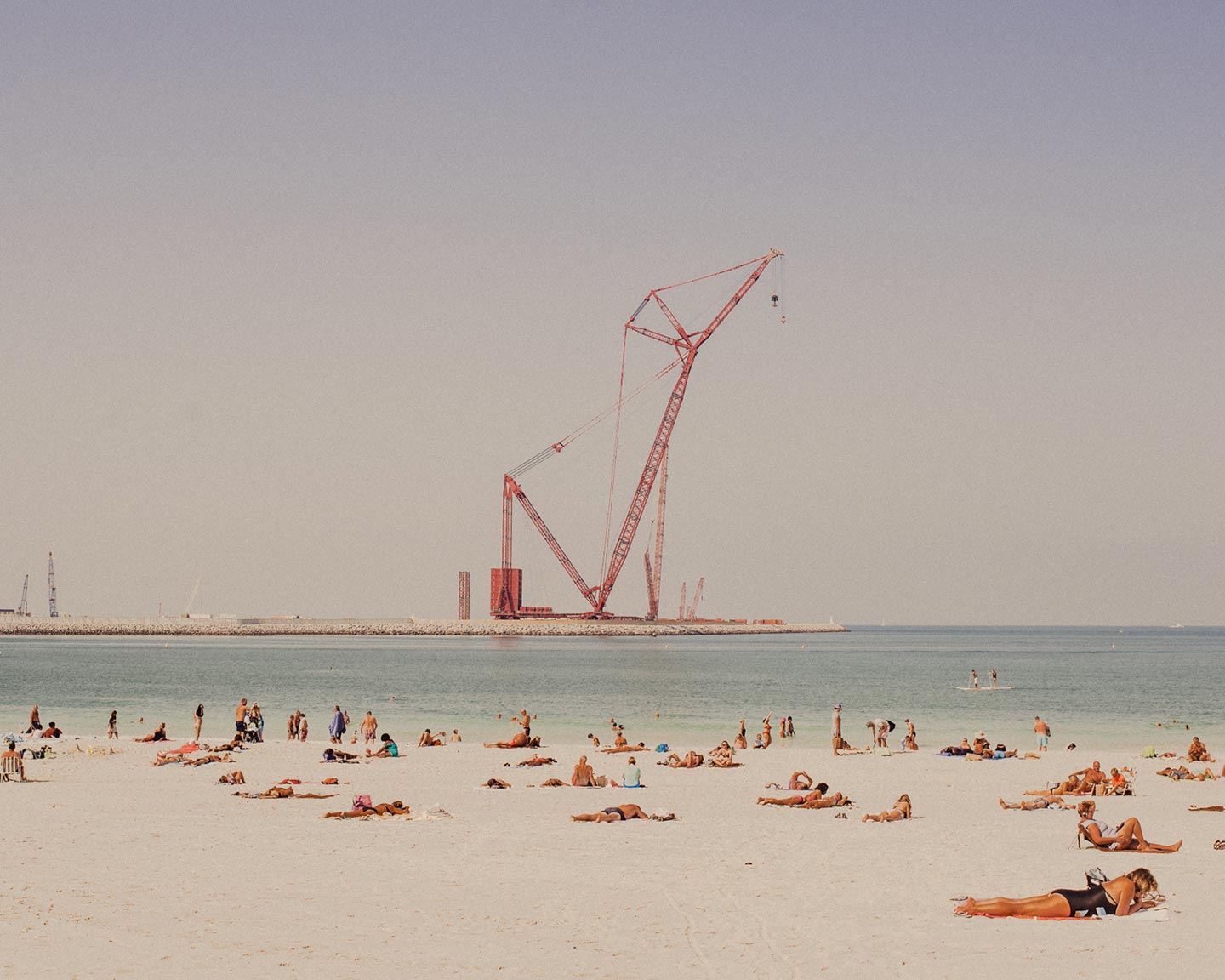 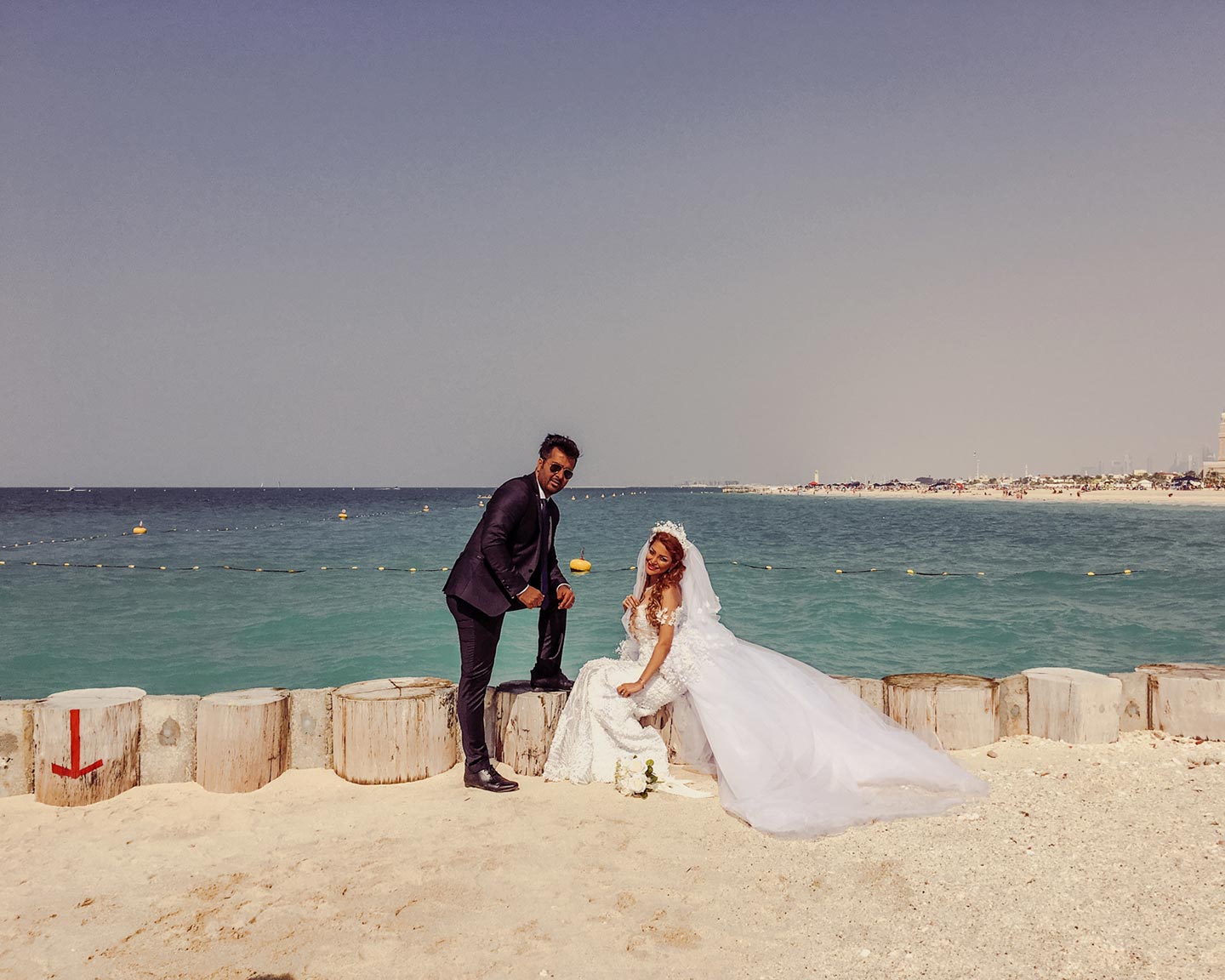 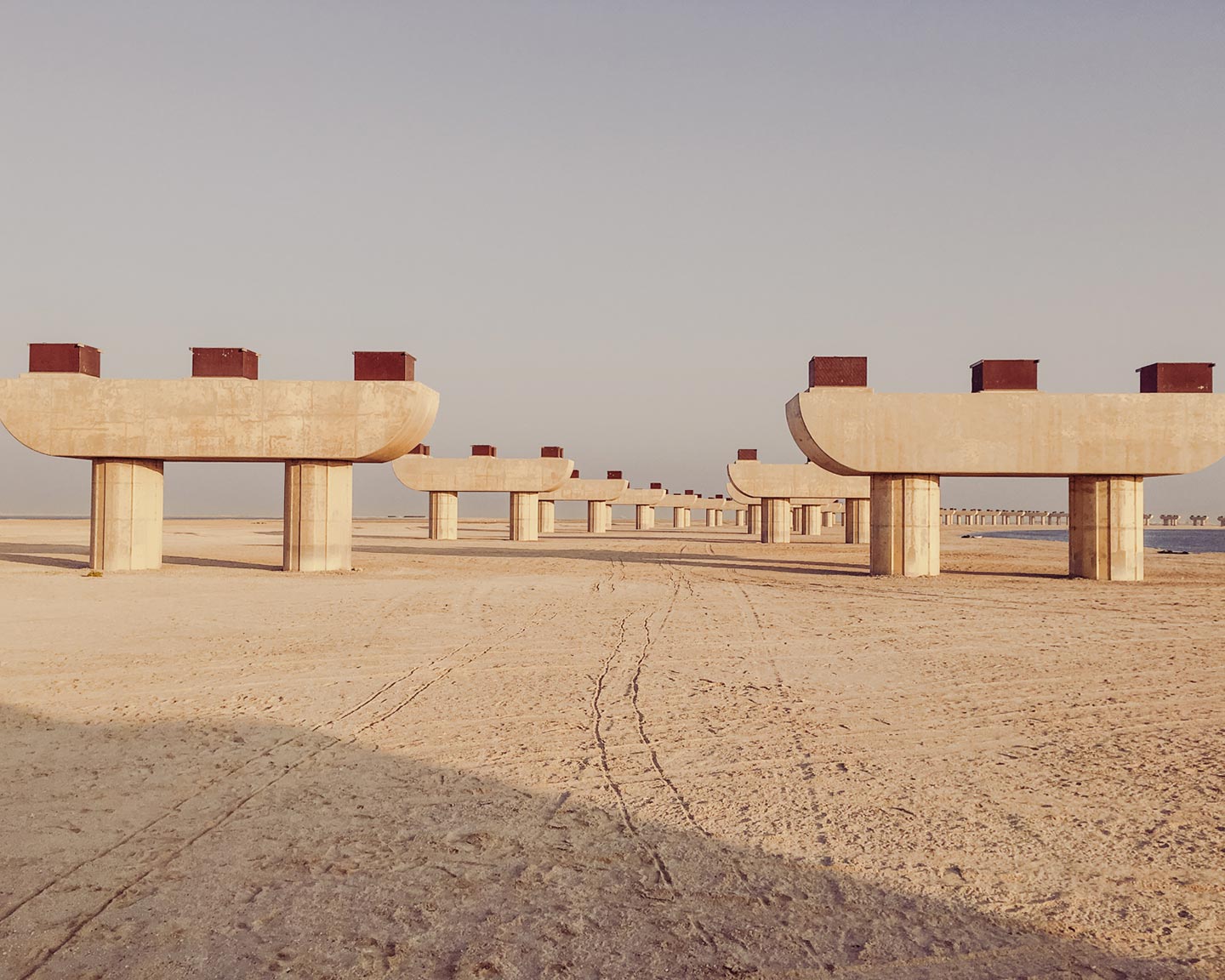 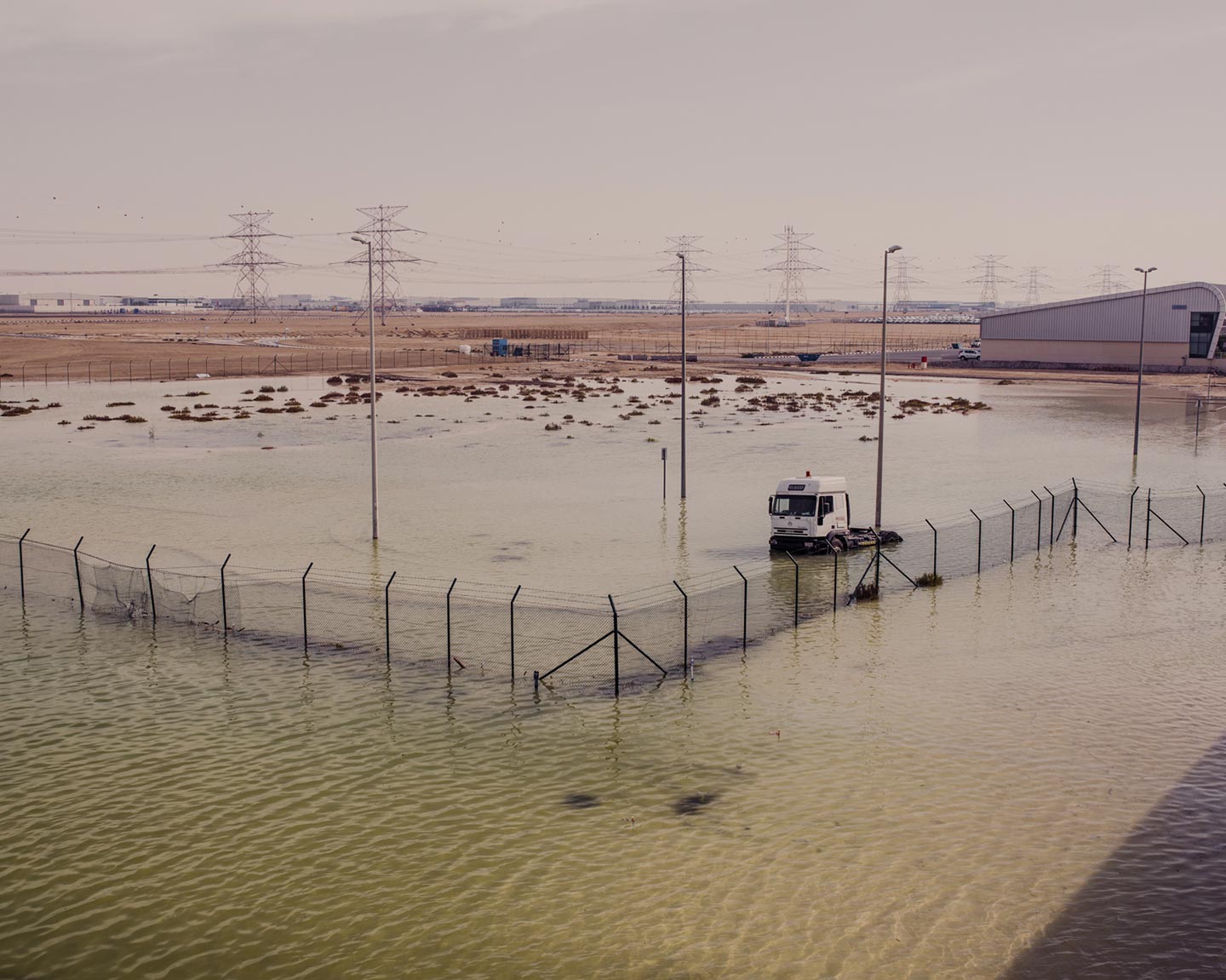 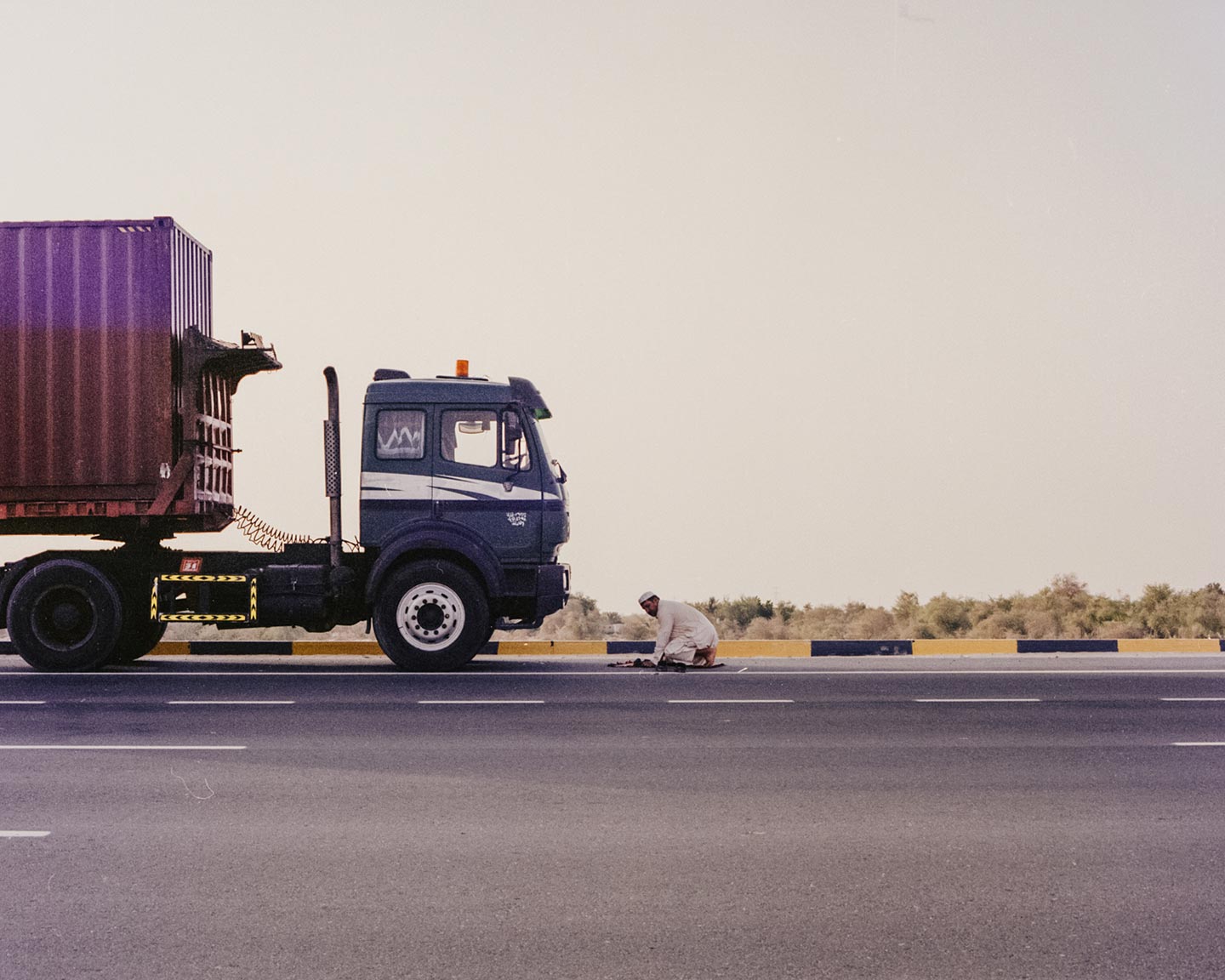 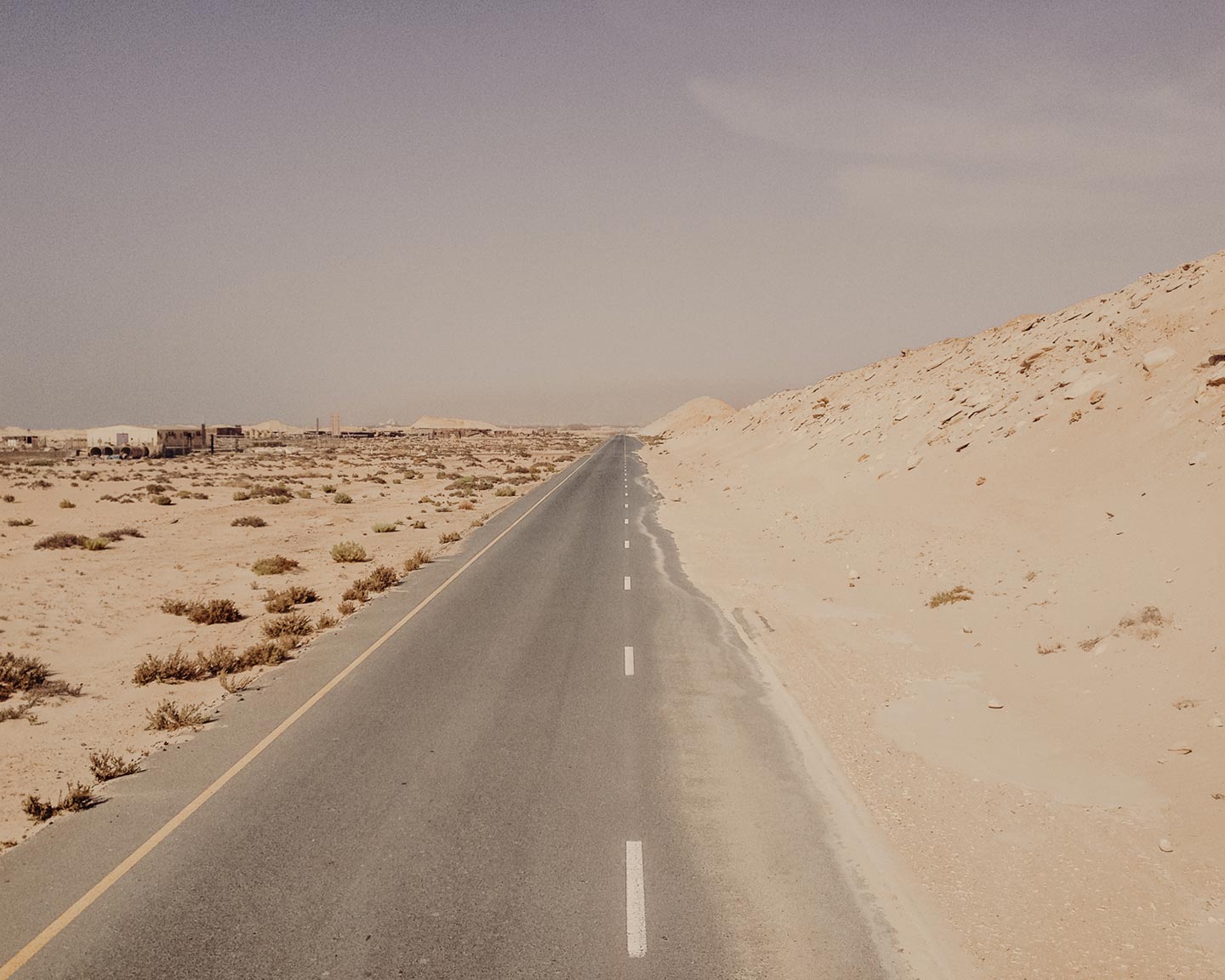 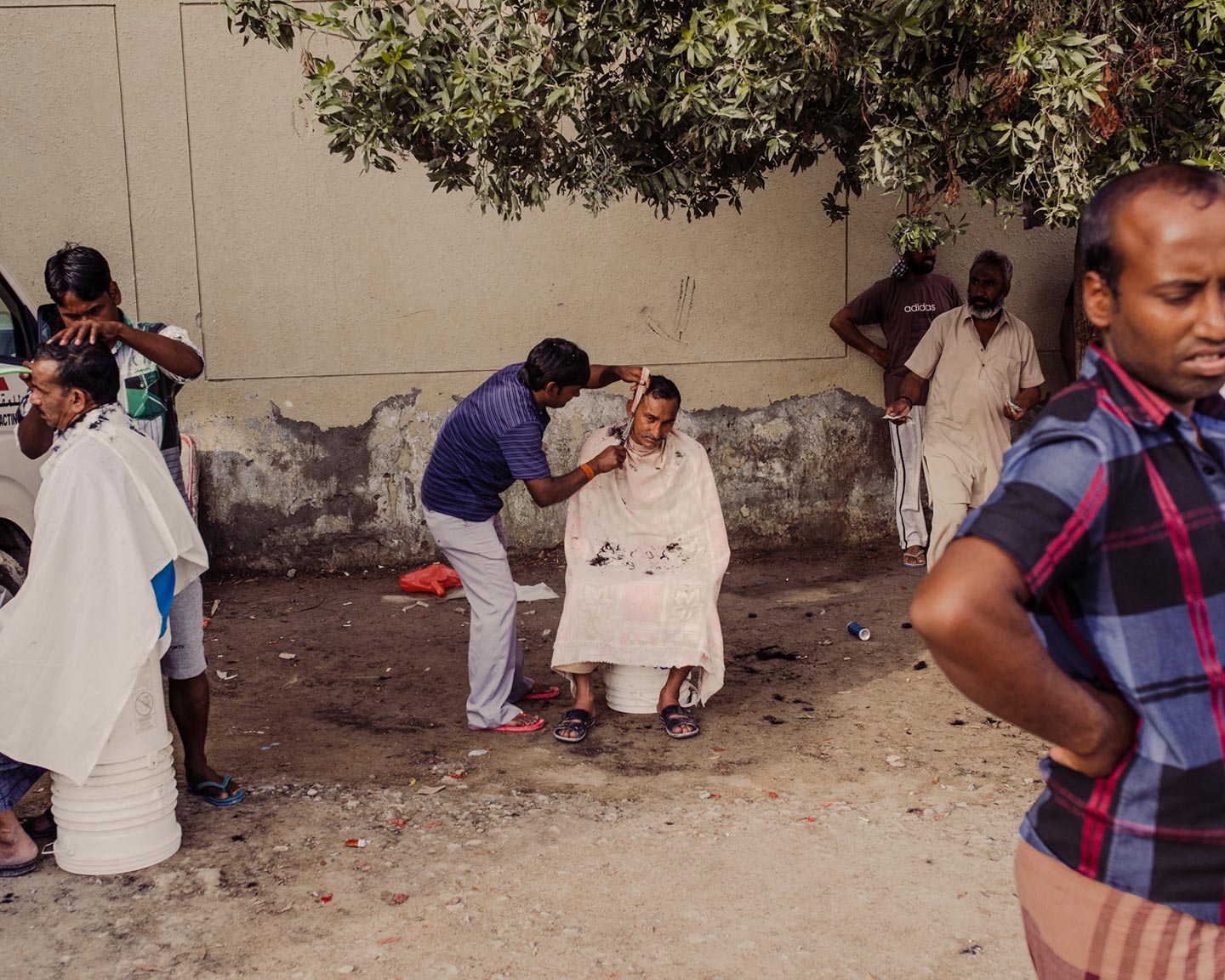 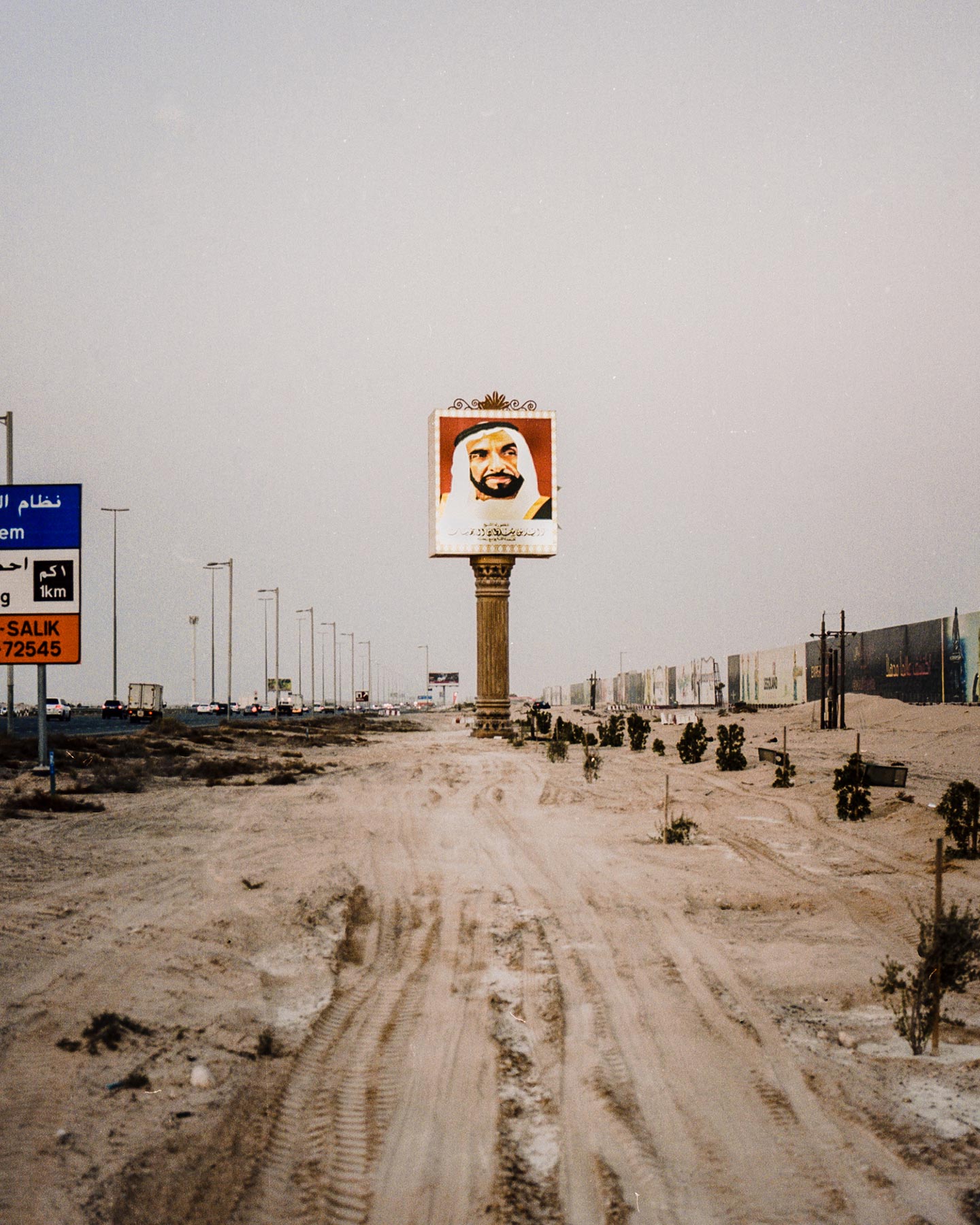 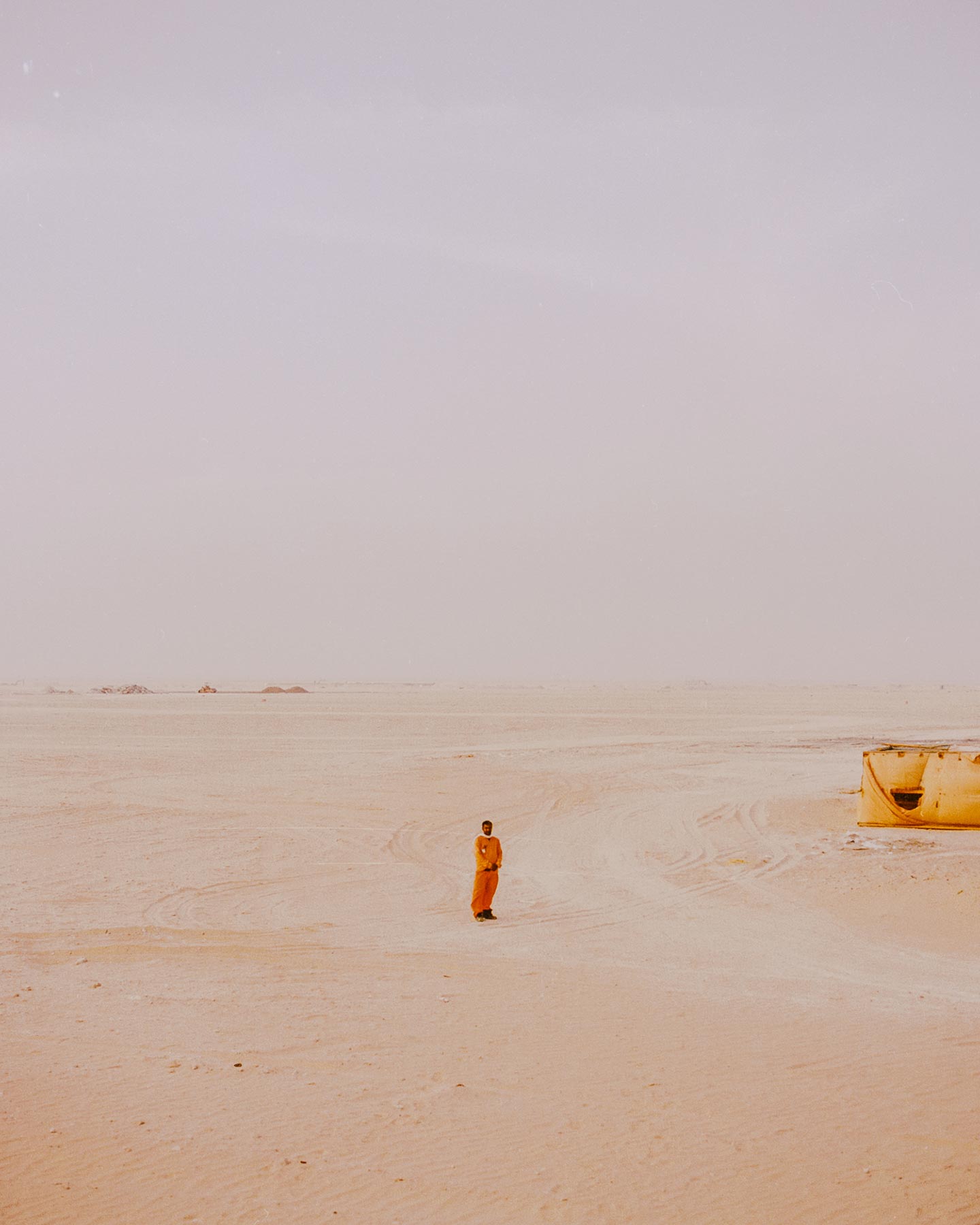 Under Construction by 25 year-old British photographer Alex Atack is a subjective reportage shot in Dubai over the course of two years. “It’s about the changing face of the city, and how people live their lives amongst this environment of constant construction,” Alex says.

The work was inspired by Alex’s personal life: “I’m from the UK, but I grew up in the United Arab Emirates, and I have this childhood memory of coming back to Dubai after the summer holidays and playing a game with my sister where we’d point out all of the things that had changed about the city from the back seat of the car. Because after 5 or 6 weeks away—especially in the early 2000s—parts of the city could be almost unrecognizable: a new roundabout would’ve popped up and you couldn’t drive the same route home, or what used to be just an empty sand lot in your quiet neighborhood would’ve turned into construction on a new villa complex within the space of a few weeks.

The best example I can think of is a place called Safa Park. Growing up, this was a park right in the middle of the neighborhood we lived in, and it was this huge green space where we’d play football and go on theme park rides and have ice cream—that kind of stuff. Then in 2014 they cut the park in half and dug a canal right through the middle of it. I was talking about it with a friend and he put it really well. He said Dubai is just not a sentimental city. It can’t be. It has to grow. It’s just kind of unfortunate that that growth sometimes means getting rid of these places that are a big part of your childhood.”

Alex left Dubai when he was 14, then moved back when he was 21, soon after graduating. “When I went back, I had this kind of obsession with just photographing the landscape because I knew it wasn’t going to look the same for very long. While doing this, I started realizing that the most interesting part of trying to photograph this change, for me, was looking at how people interact with these bits of land that won’t be there forever: impromptu football pitches on empty sand lots, men praying at the edge of a parking lot because the mosque is under construction—little moments of daily life amongst a fast-changing city.”

About his approach to making Under Construction, Alex says that “I worked as a newspaper photographer. I’d spend my days driving all over the city and would often have time to kill between assignments. I’d try and take my medium format camera with me, but sometimes all I had was my iPhone or DSLR, so I stopped being precious about what camera I was using and just started shooting wherever I could, whenever I had the chance. I felt that if, even in some small way, my frantic desperation to try and photograph everything before it was gone could contribute to a historical record of a city that I love, I would have done something useful. If somebody could point at one of my pictures and say “Ah! That’s where that skyscraper is now!”, or “Whoa, this is my house before they got rid of our villa complex!”, that’d be cool.”

“I also kind of get frustrated with the way people can sometimes see Dubai from afar as this weird Las Vegas playground for the rich, built by but not for laborers from the Indian subcontinent. For sure—that’s a side to life in Dubai, and you’d be wrong to try and deny that extreme wealth and obscene poverty and human rights violations aren’t a part of this city’s history and fabric. BUT. It’s also a place where normal people live; they go to work and play football and hang out with their friends and have their wedding pictures taken on the beach. There often isn’t a lot of nuance in the way Dubai is reported on, so I’d like to offer people a more balanced view on life in the city.”

Alex’s main interest as a photographer is in “stories that treat issues and people and places with nuance. We’re getting to a time now when parachute journalism isn’t so acceptable, which is fantastic because it means there’s more space for photographers (and writers!) to really become experts on a place or an issue and to tell their stories with more depth. Radio and print journalism & storytelling influence my work just as much as any photography; I don’t think the medium is super important. I try to pay attention to the world and look at how other people interpret their corners of it, and think of that in my work. I’m just finishing Alia Malek’s The Home That Was Our Country—a wonderful book where she weaves in and out of her family’s history to tell the story of Syria from the Ottoman empire to today. It’s just beautiful. Such work is an influence, for sure: stories which find the personal in these huge world topics.”

Some of Alex’s favorite contemporary photographers are Andrew Quilty (“the way he photographs Afghanistan with such honesty and intelligence and integrity is always an influence on how I try to approach shooting“), Mustafah Abdulaziz (“his knack for making beautiful, human photographs of what is, at it’s core, an environmental issue“) and Guy Martin (“he has this amazingly intelligent way of pulling together small threads of ideas that seem to have no connection to one another, and making it all make sense“). The last photobook he bought was a retrospective of work by Jane Brown (“a wonderful ex-Guardian photojournalist from the UK who has had a fascinating life in photography“).