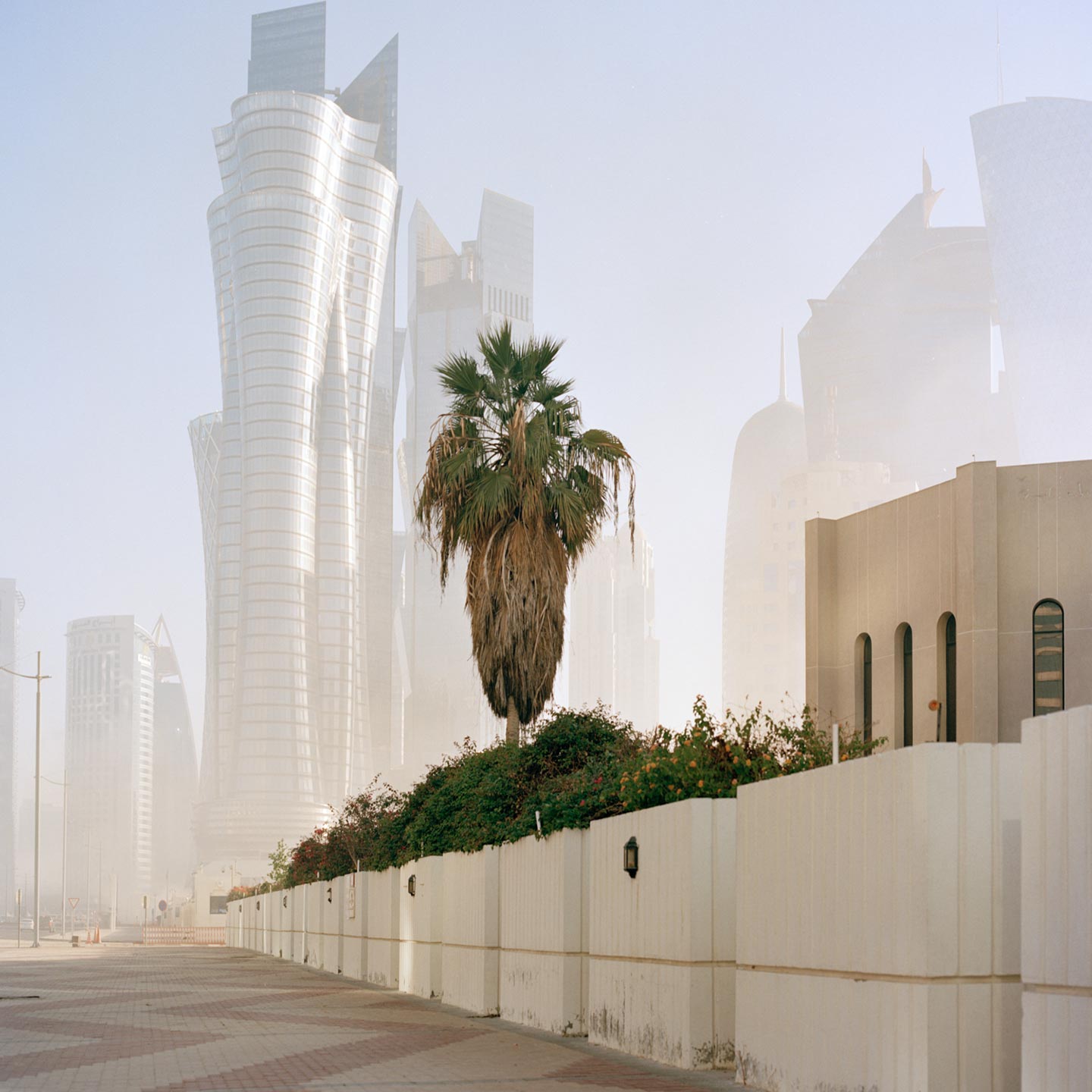 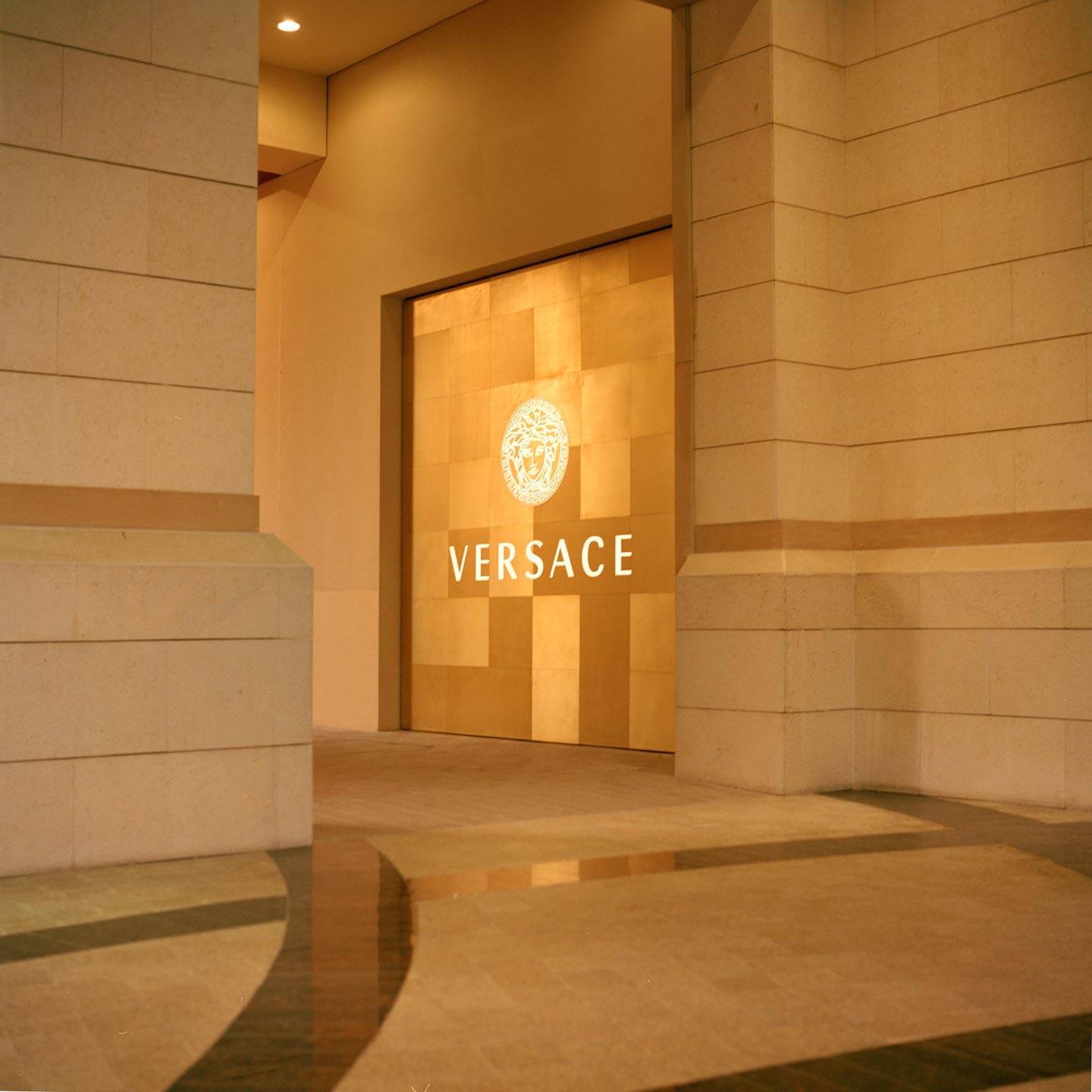 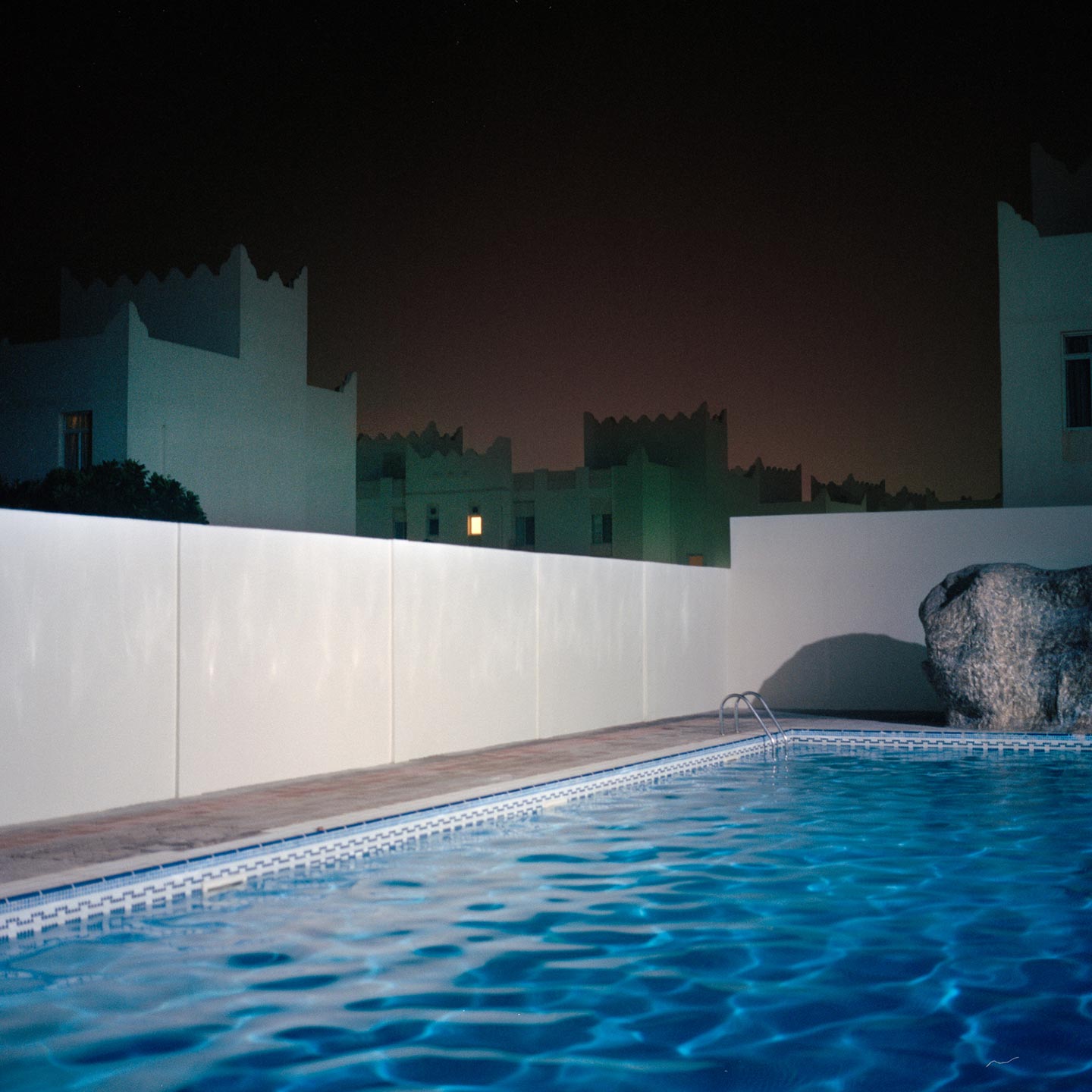 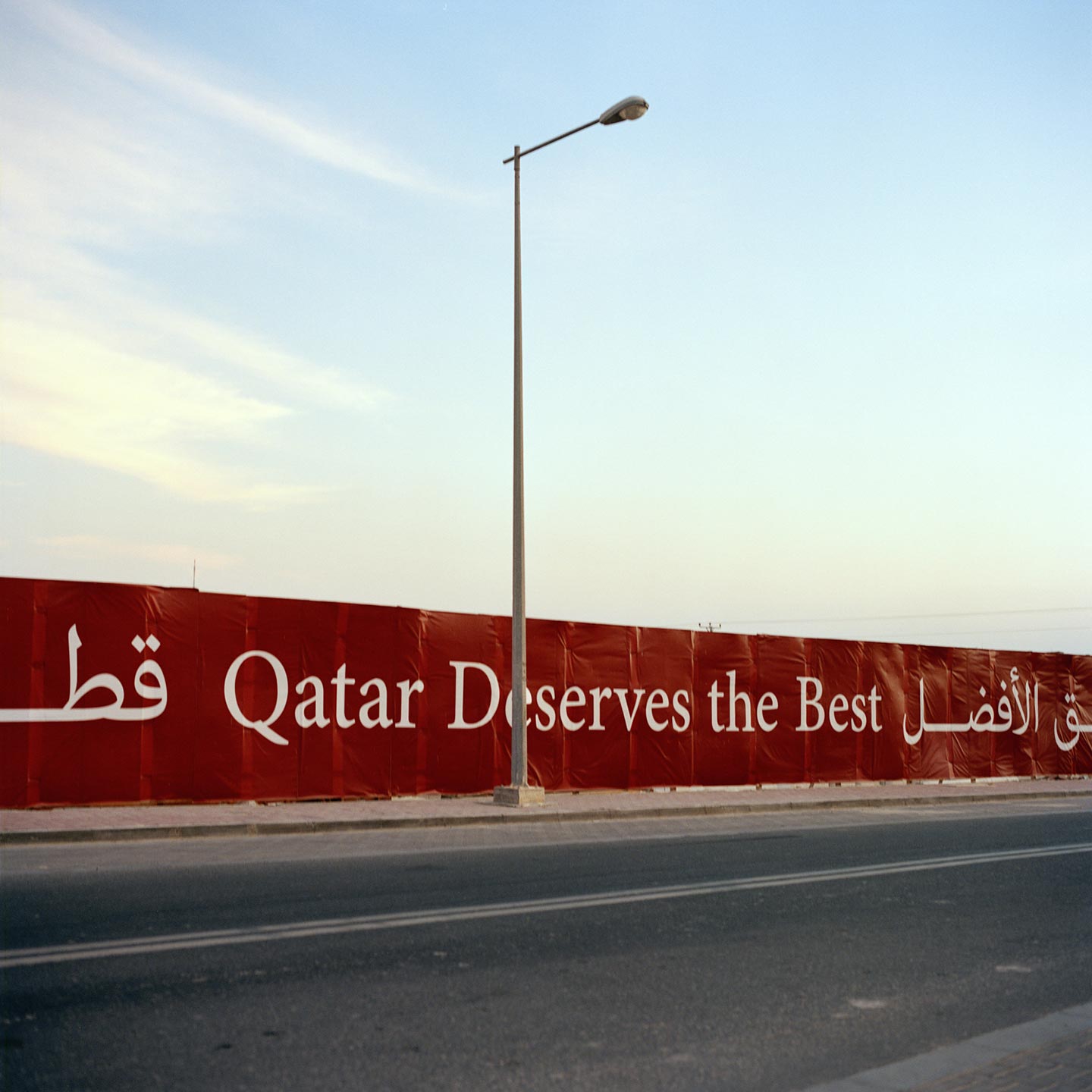 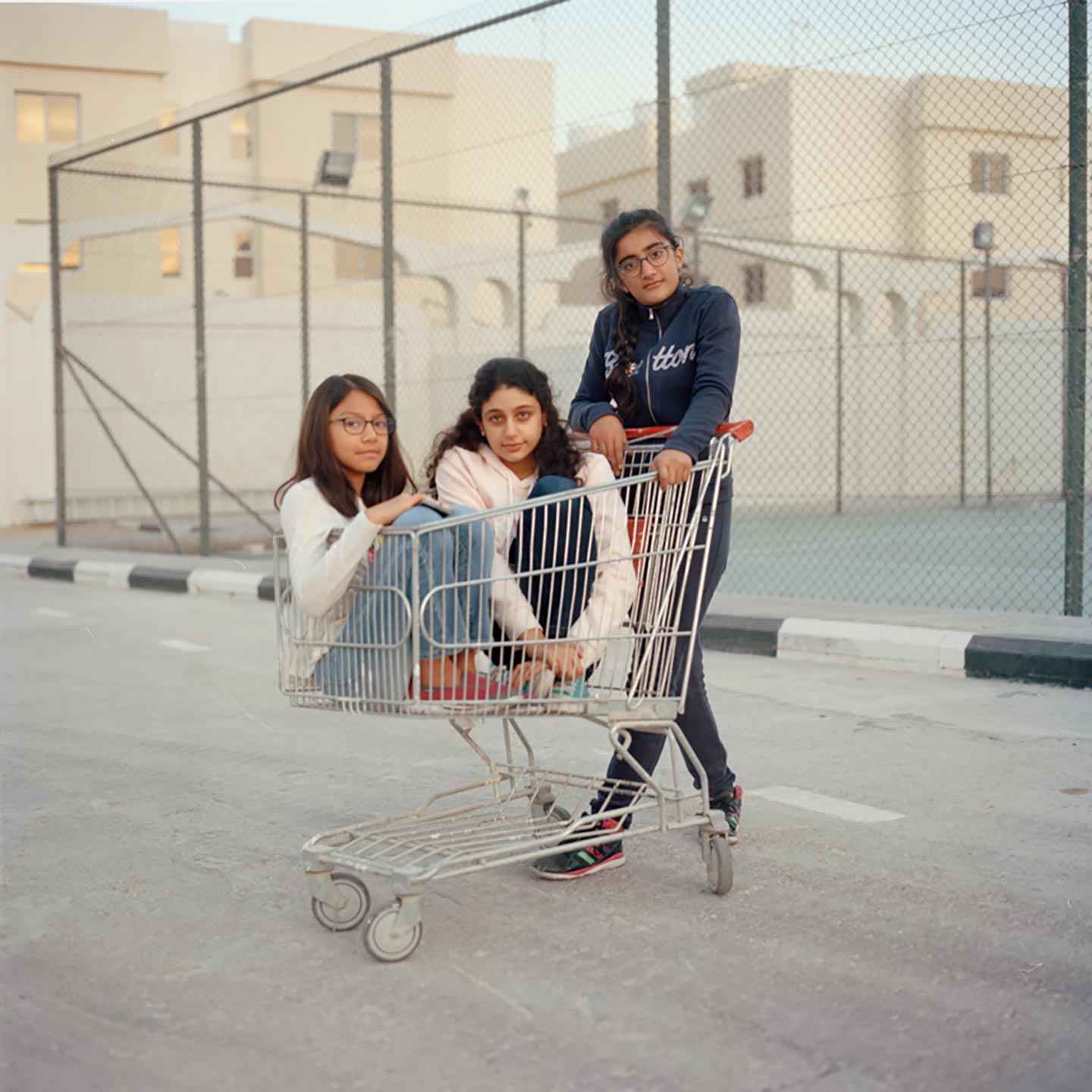 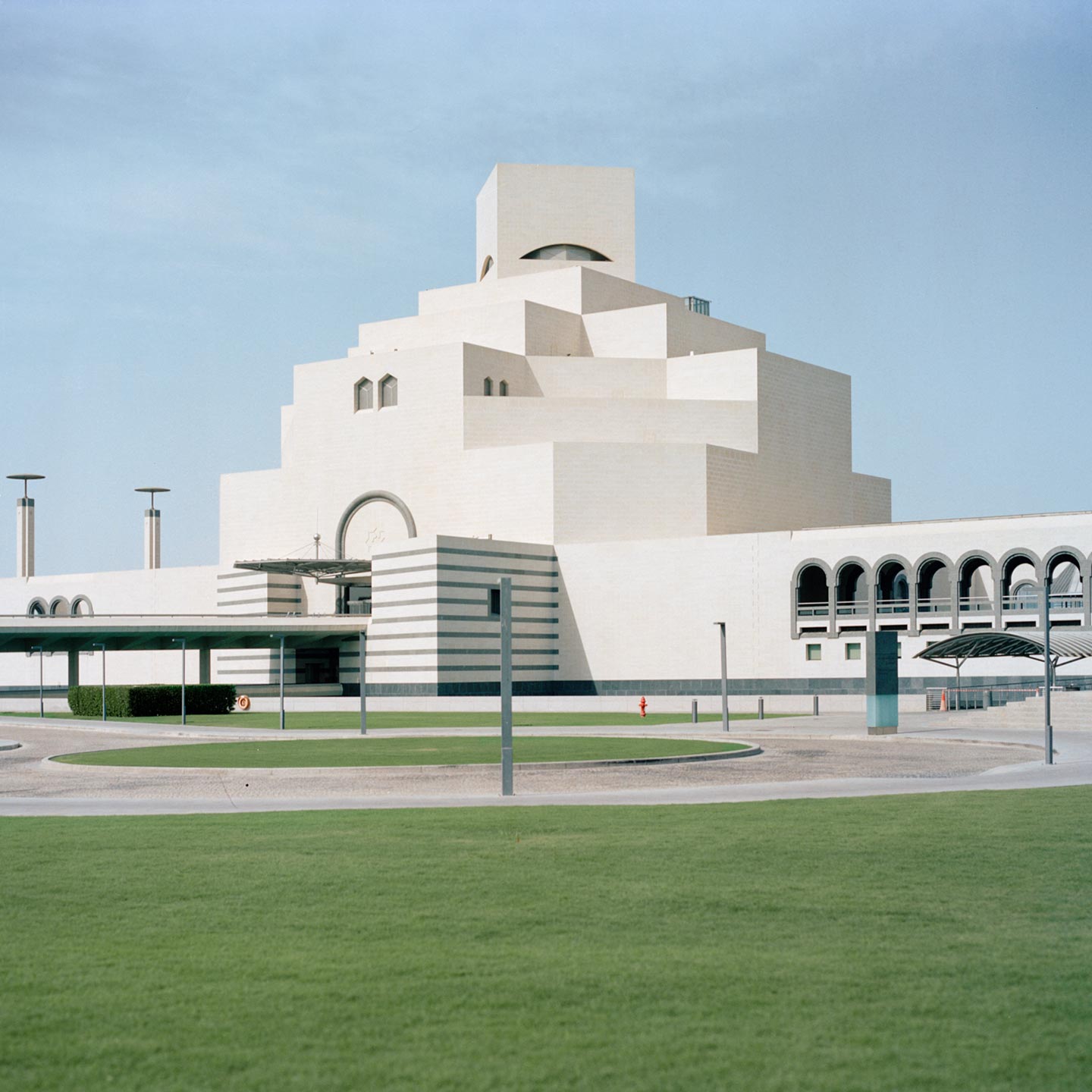 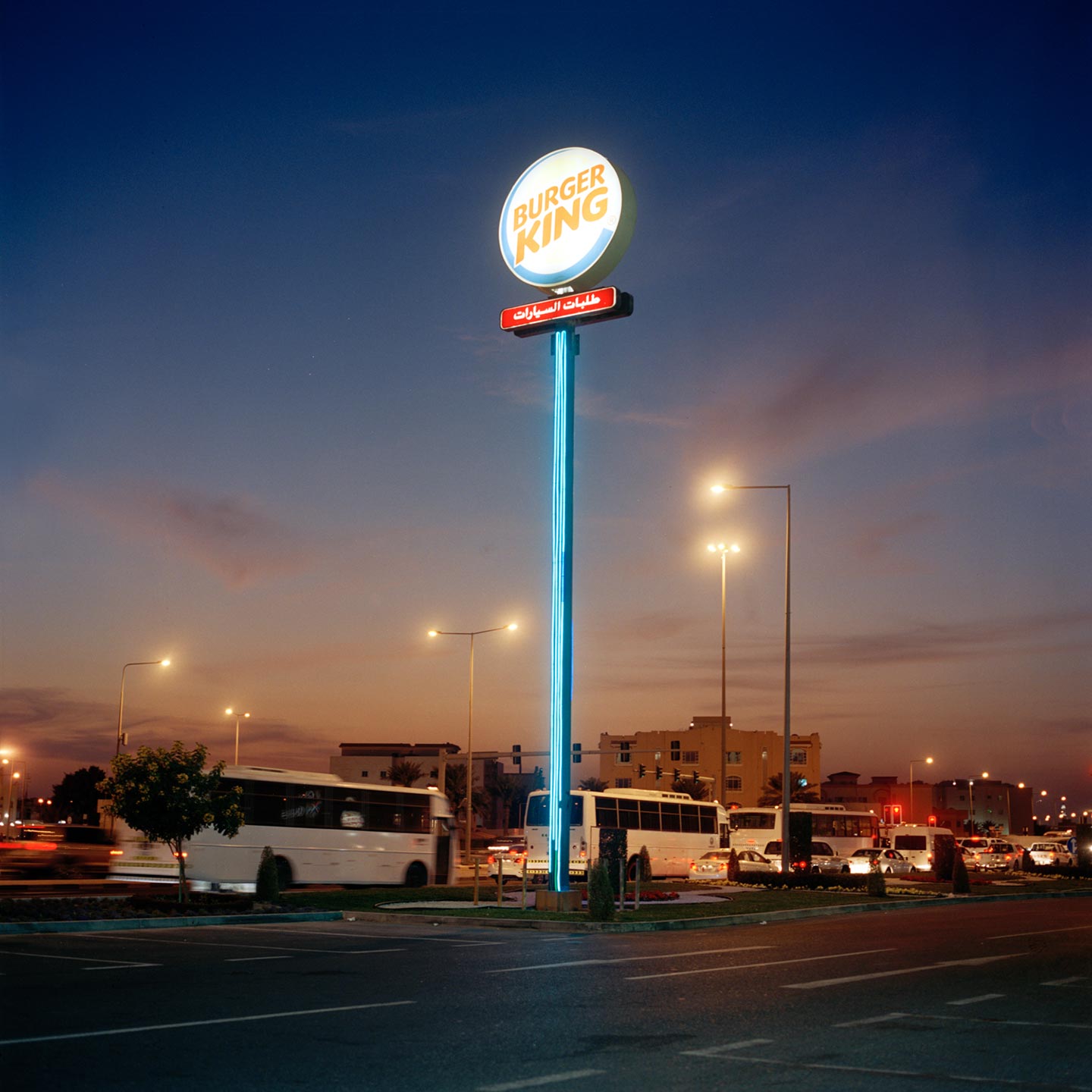 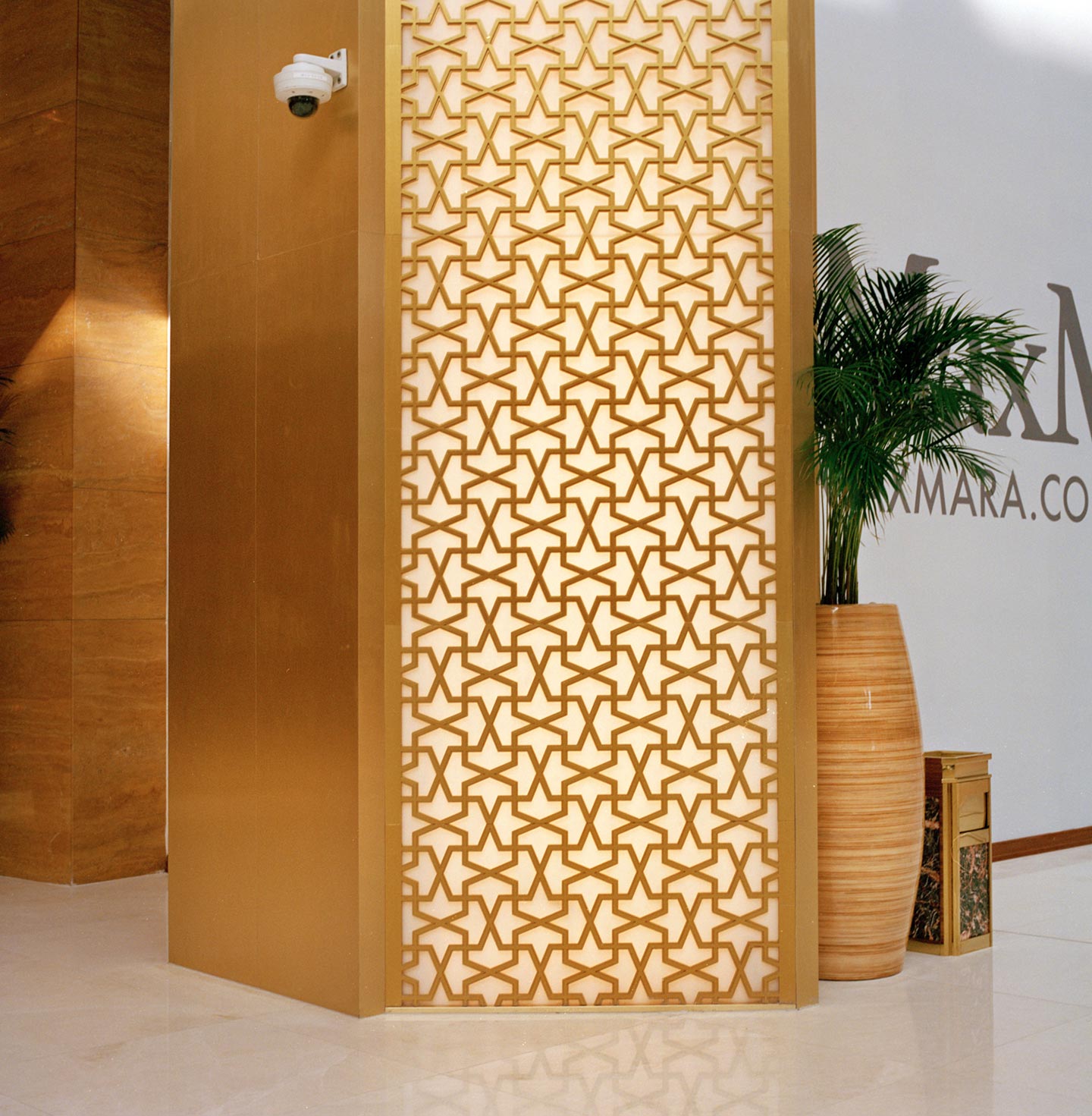 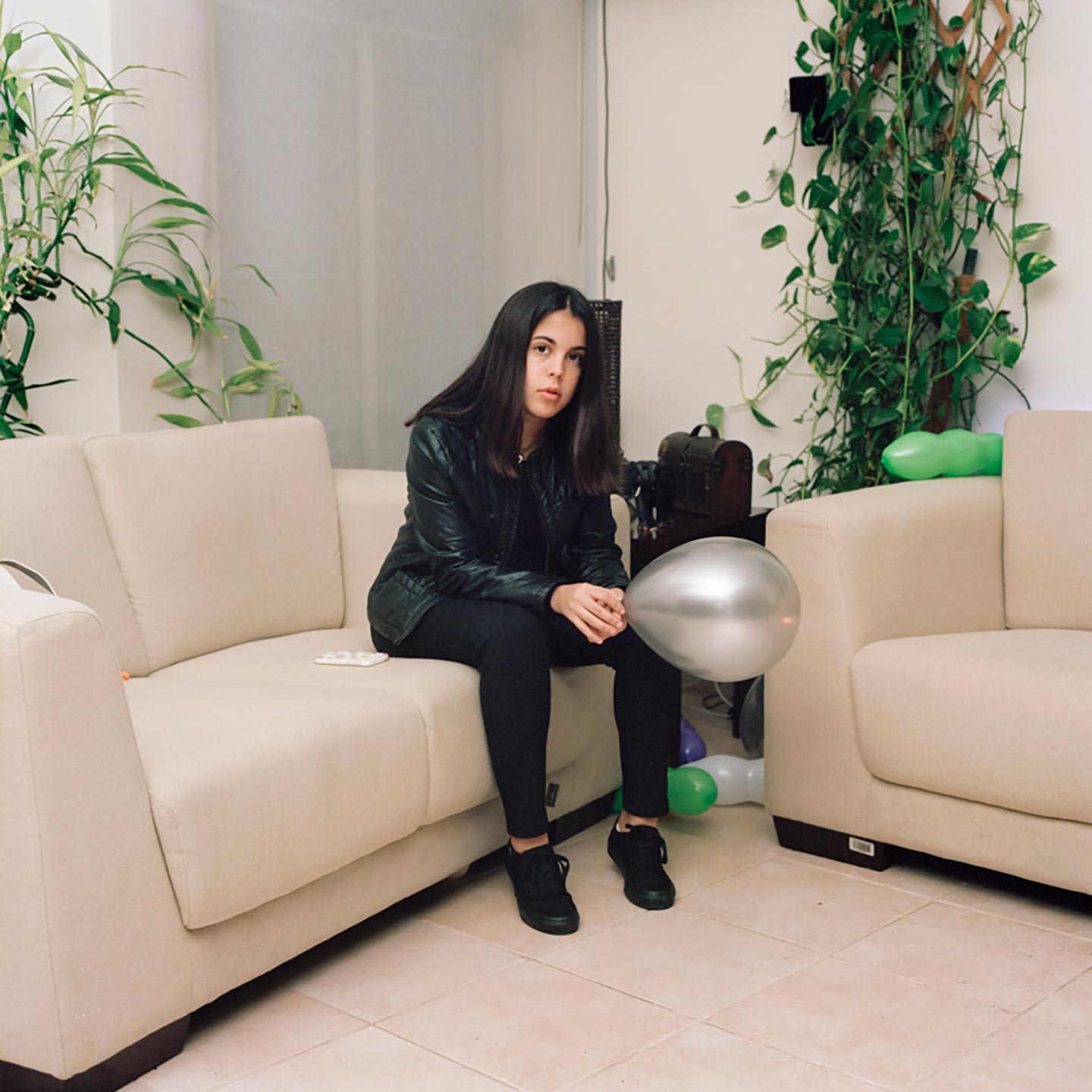 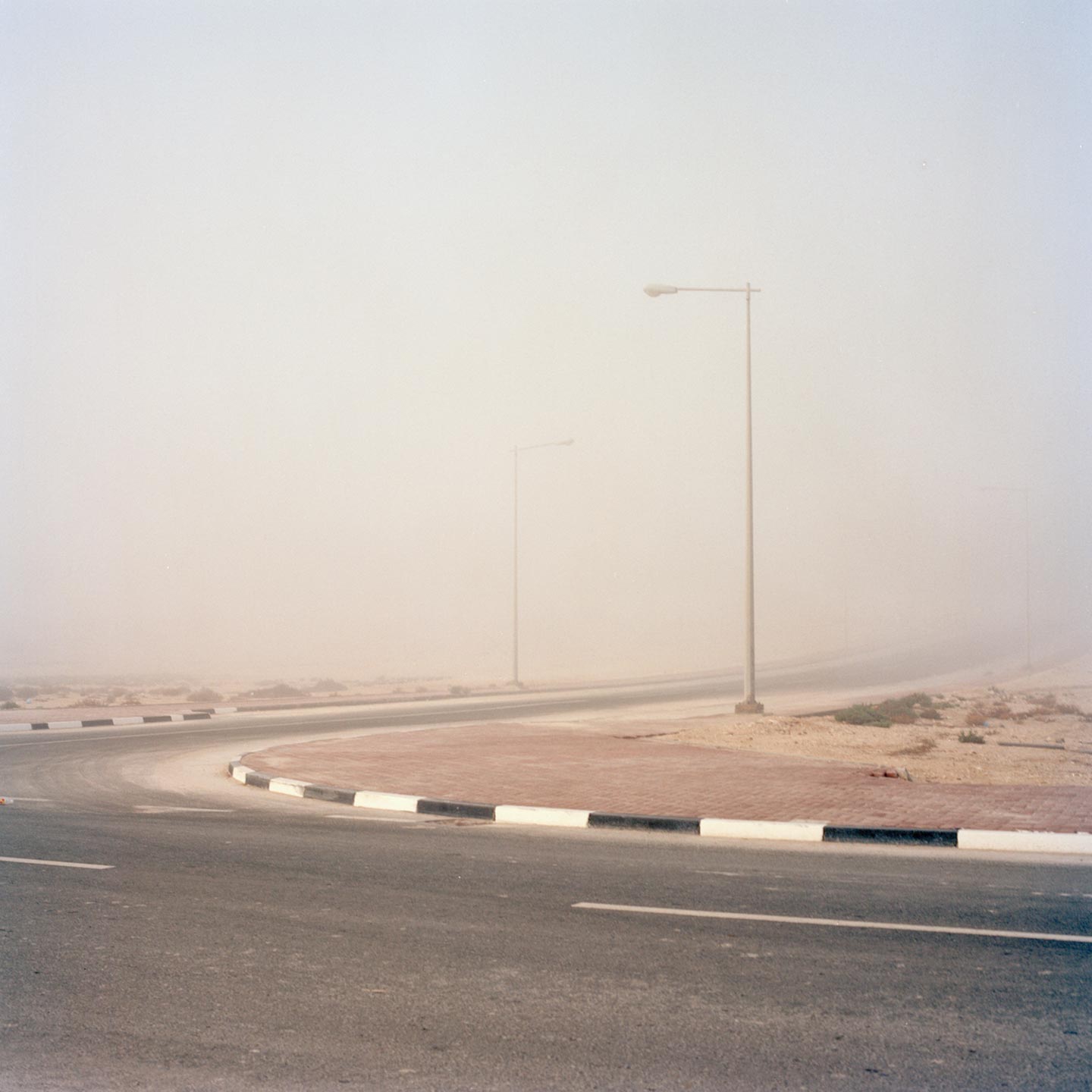 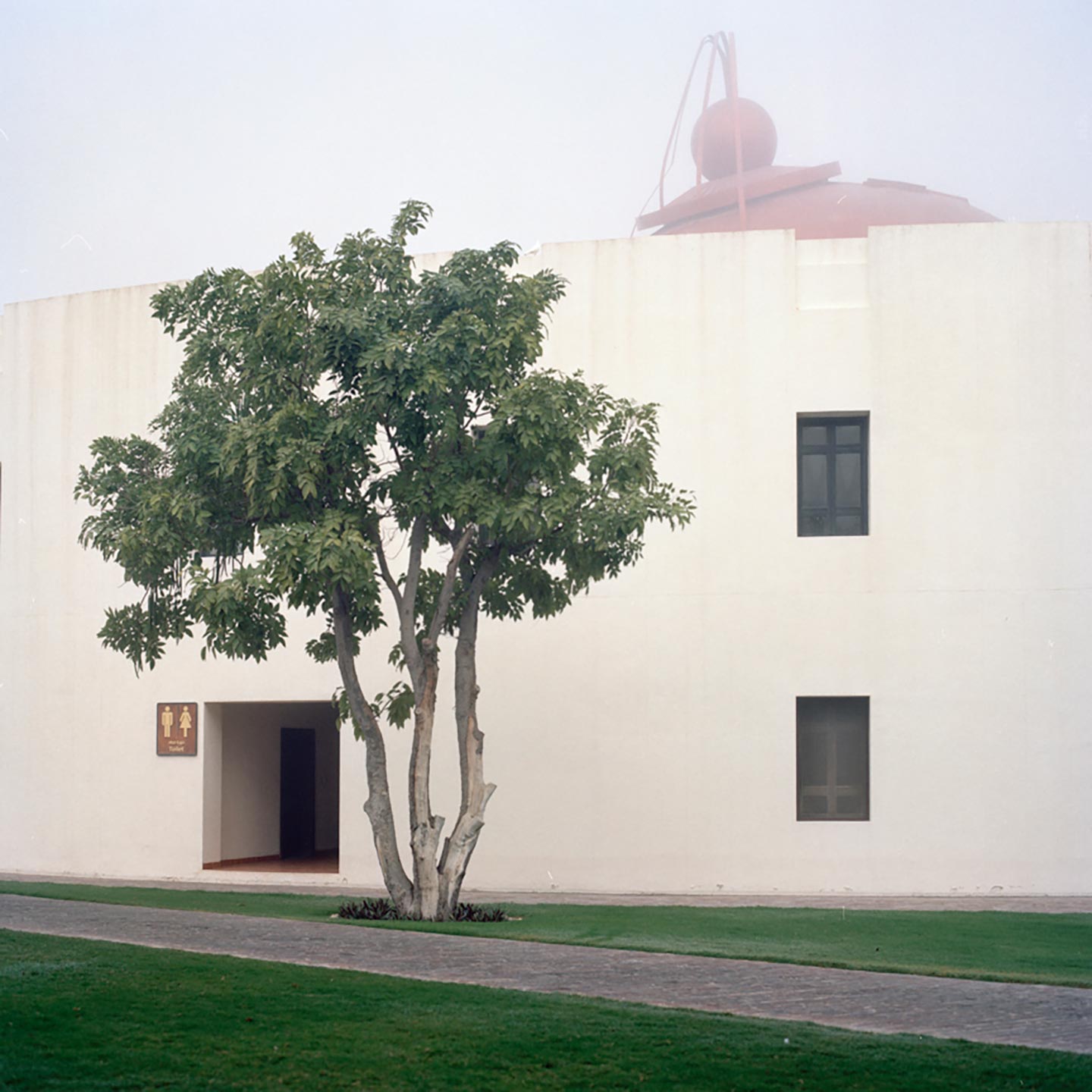 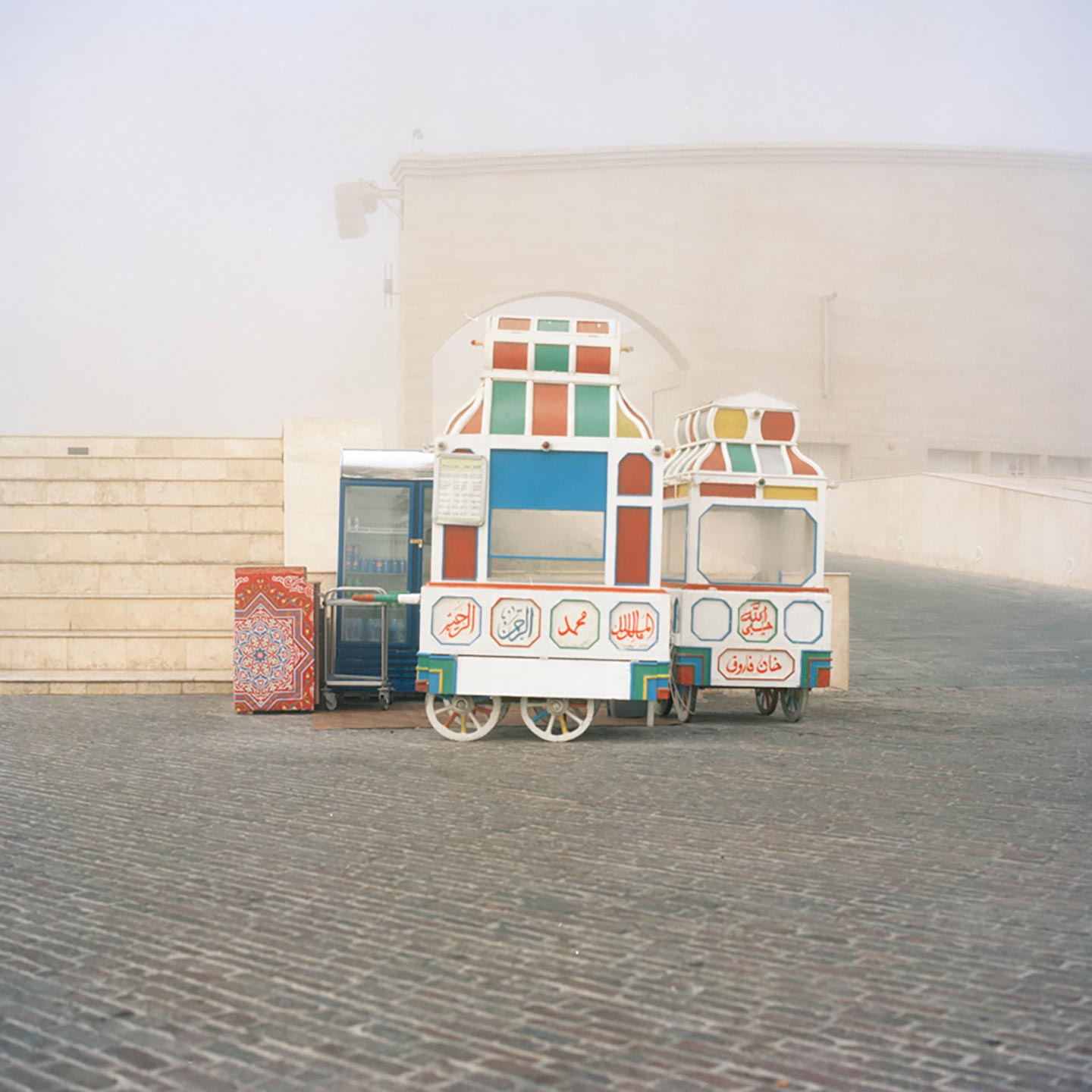 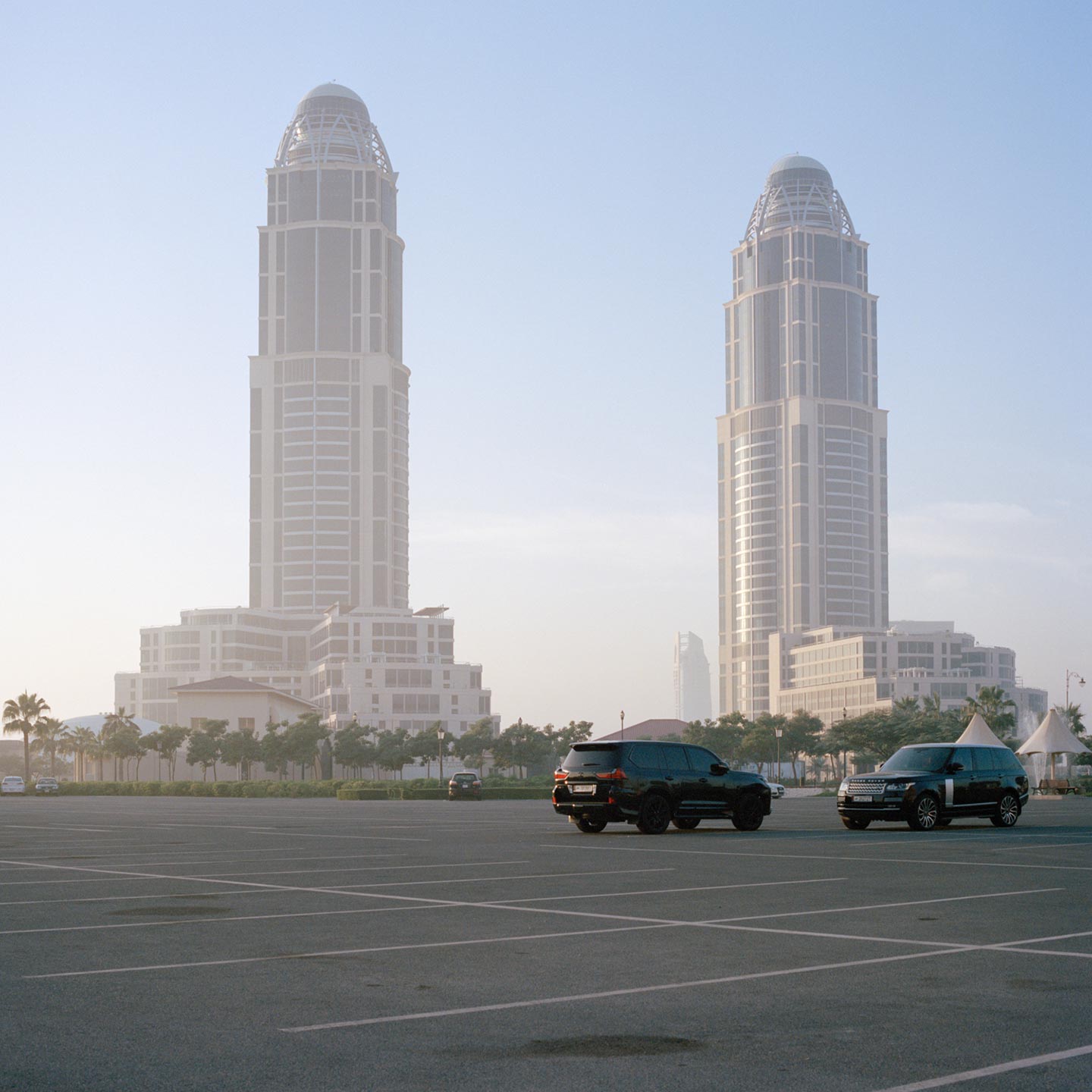 Uncanny Valley by 25 year-old Brazilian photographer Giovana Schluter is an ongoing subjective reportage entirely shot on film about Doha, the capital city of Qatar. “I’m interested in the way humans shape their living environments and the landscape,” Giovana says about her practice as a photographer, “and particularly in the liminal, contrived and often surveilled spaces anthropologist Marc Augé calls ‘non-places’. In the anatomy of the built environment, I’m looking for how space creates forms of life, how infrastructure works like an operational system that we don’t see, but that lays out the entire framework of our lives.”

When Giovana was 14, her father, a commercial pilot, moved to Doha for work. “I’ve always been really interested in the ways Doha mirrored the suburban environments I grew up in, and how it felt like an exaggerated version of things I already knew. In a way, I felt like Doha itself was a neat allegory of what it feels like to be alive in late Capitalism—being cynically absorbed in our own lives, throwing money at problems if you have it, being treated as a pariah if you don’t. Qatar is a very liberal country in comparison to its neighbors, but these liberties only go so far. It is, after all, a country ruled by a royal family that not only controls, but basically owns the country, and has no domestic opposition or grassroots movements to deal with, at least for now.”

“The power of Capital over all things can be seen everywhere, but in Qatar I think it’s so neatly visible in the skyscrapers that sprout from the ground overnight, the streets that keep changing their courses and make home delivered mail a challenge (there are no zip codes in Qatar, so most people use PO Boxes), the futuristic public parks and malls that don’t allow the entrance of single men (a.k.a. migrant workers) on Fridays. So my interest, ultimately, is to look at Doha not as this freakish, exotic, entirely alien place, but as a funhouse mirror image of what the current stage of Capitalism looks like in the the West. The title Uncanny Valley comes from a notion that’s used to describe the negative emotional response we have to humanoid figures that are very convincing. Applying that to a place, I’m referring to this ambivalence between familiarity and strangeness.”

Giovana’s interest in the relationship between humans and the built environment has roots in her personal life: “I grew up feeling like I lived inside a diorama. I was raised in a gated community in a suburban area not very far from São Paulo, in Brazil. Going anywhere, seeing friends, buying a loaf of bread, doing anything at all, depended on someone driving me. It was a very privileged childhood, but that also often felt lonely and imprisoning. It took me a long time to realize that the place where my family had chosen to live—because of security, space, price, all the reasons that bring people to the suburbs—had a huge role in why I felt that way, why, even well into adult life, I had a persistent feeling (that I’ve been working all my life to shake off) that the things outside my immediate relationships didn’t affect me. I think this work is an attempt to flesh that out, and address this numbness head on, telling myself and those who look at my work that space is political, that there are ideological, economic reasons why the places we live in look and function the way they do, and that, therefore, they are ultimately changeable.”

As far as aesthetics go, Giovana was inspired by architectural renderings: “I like thinking about how they express a single person’s or organization’s idea of how a certain space should or will be used, which always turns out to be either imprecise at best, or a complete fiction, an architect’s delirium at worst. I think something interesting happens when you combine that with photography, that is a medium (still) expected to be a facsimile of reality. This is not true for all images in the project, but in a lot of them I am trying to create confusion, to make the viewer ask herself whether she’s looking at a photograph or a computer rendering. At the same time, the spirit of this project is to leave the viewer with a sense of familiarity, even if there’s no immediately obvious reason why they should feel familiar with it.”

“I looked a lot at Brian Ulrich, Richard Ross, Richard Misrach, Thomas Struth and Alec Soth,” Giovana says of her specific photographic references for Uncanny Valley. “In the process of conceptualizing the work, I refer constantly to Death and Life of Great American Cities by Jane Jacobs. White Noise by Don Delillo, that I read recently, has been coming to my mind a lot while editing this project.” More generally, Giovana’s photography is influenced by “the suburbs, malls and airports where I spent a lot of my childhood and adolescence, Jane Jacobs, and the book American Prospects by Joel Sternfeld.” Some of her favorite contemporary photographers are Katy Grannan, Thomas Struth, Stephen Shore, Alec Soth, Joel Sternfeld, Taryn Simon, Max Pinckers, Laurent Kronental and Jon Tonks. The last photo book she bought was The Jungle Book by Yann Gross: “It was actually a gift, but I like it so much I’m buying myself a copy, too.”