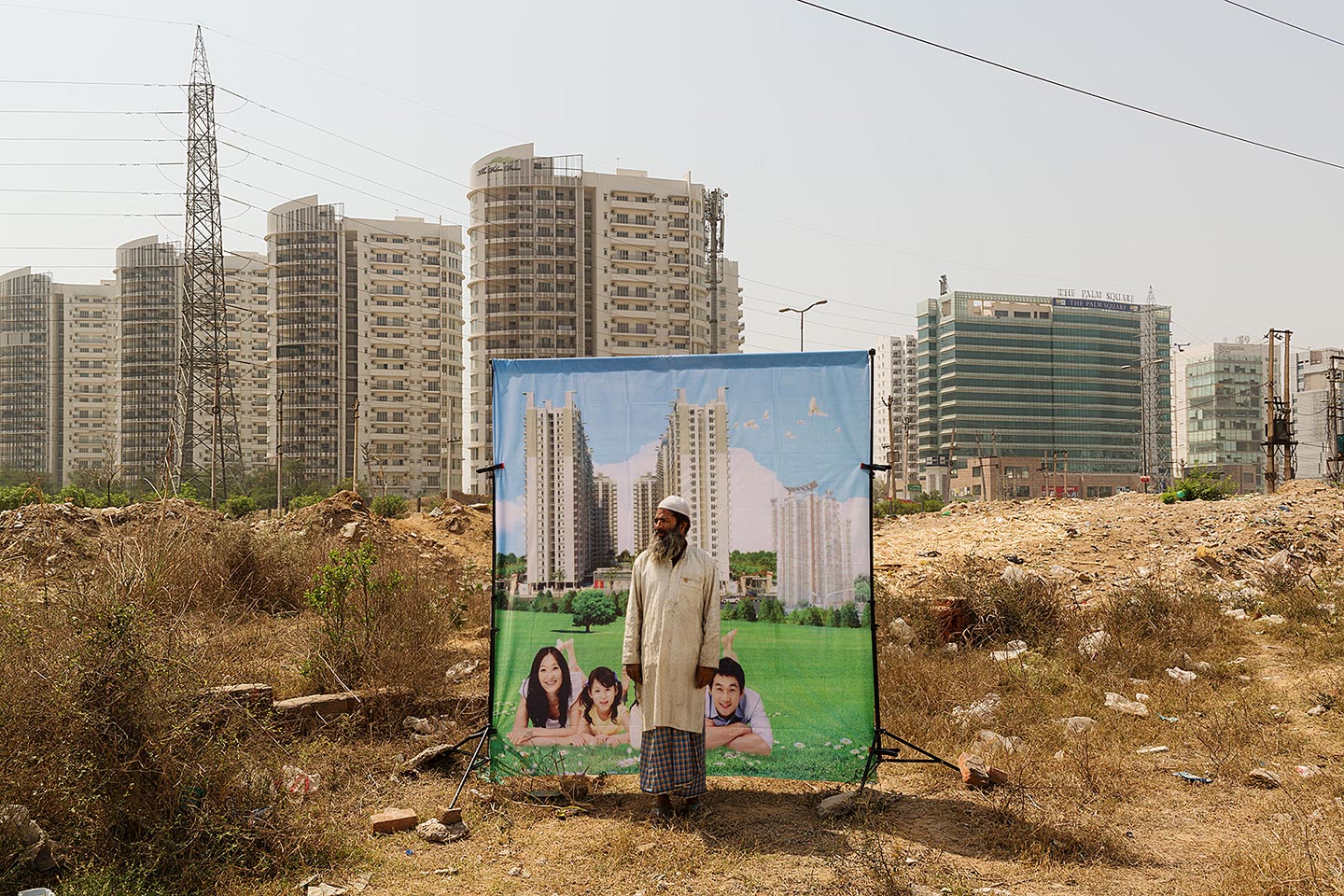 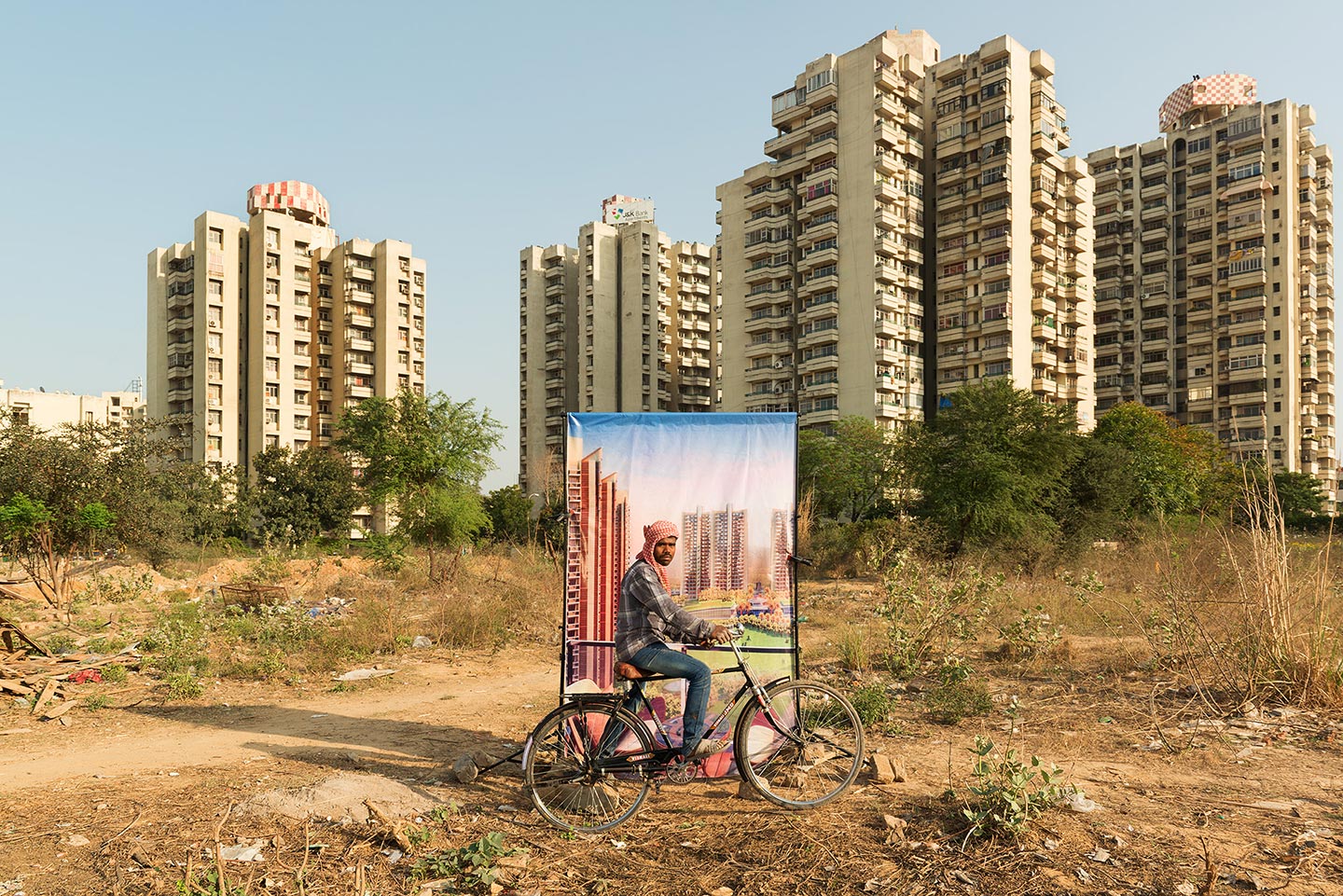 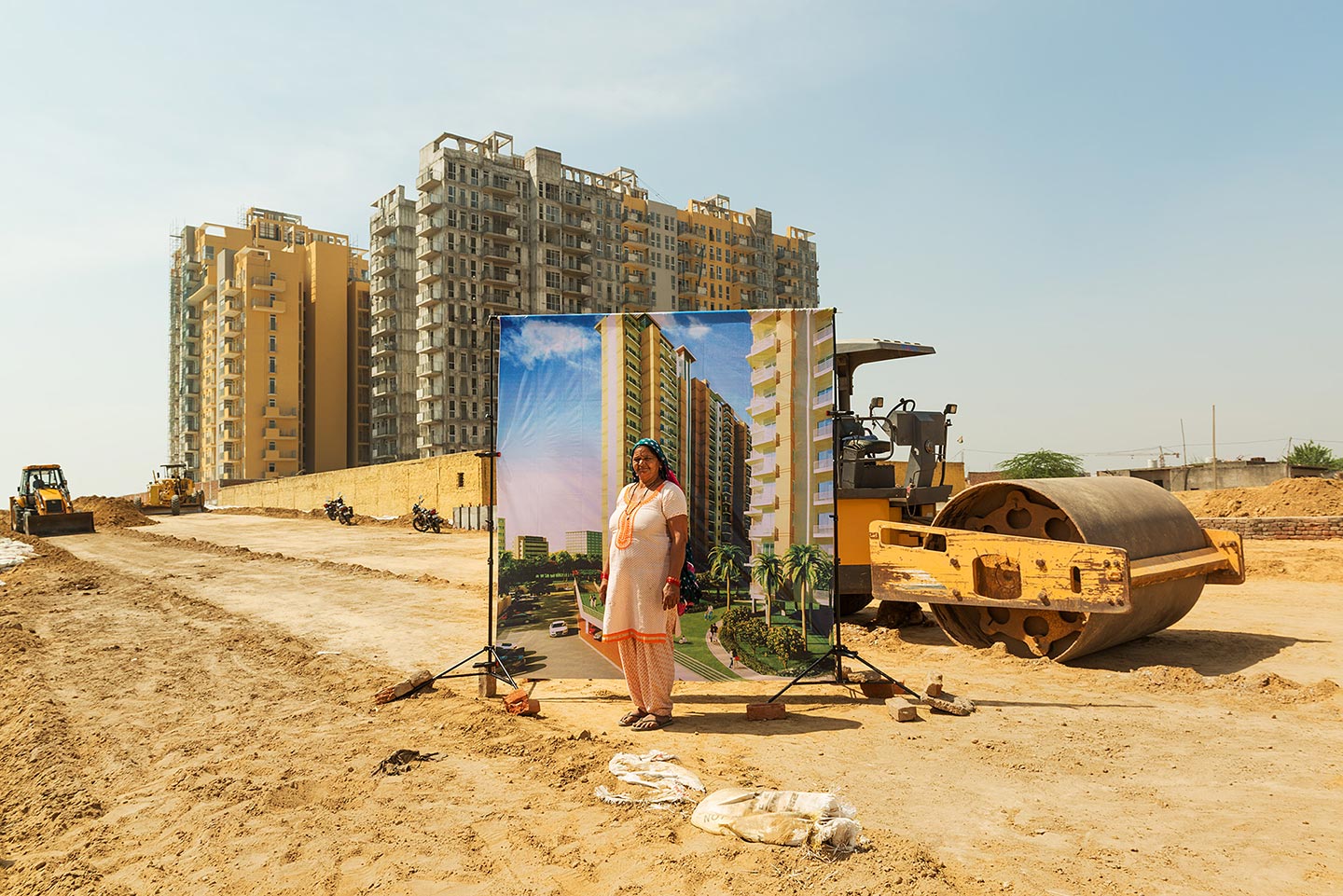 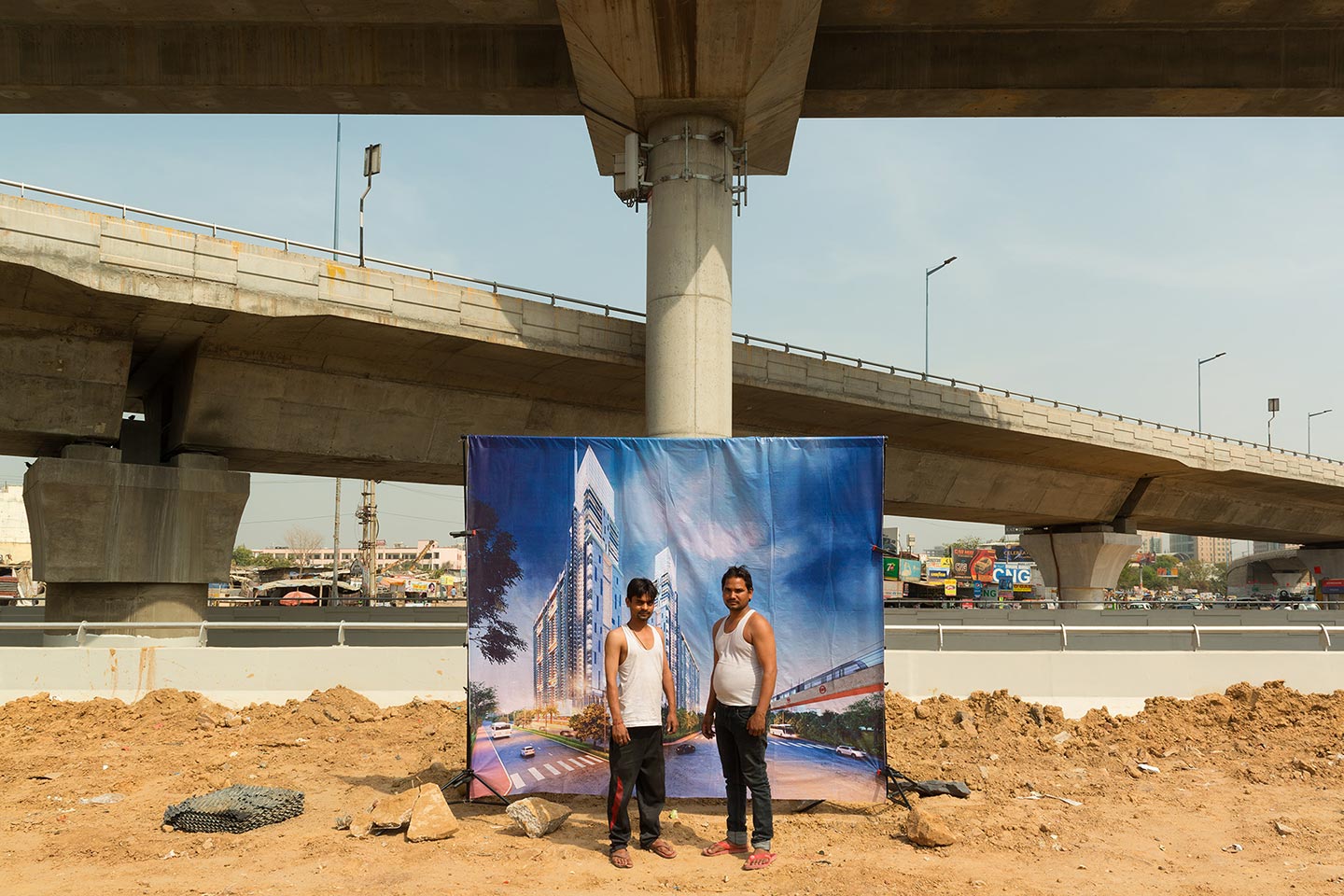 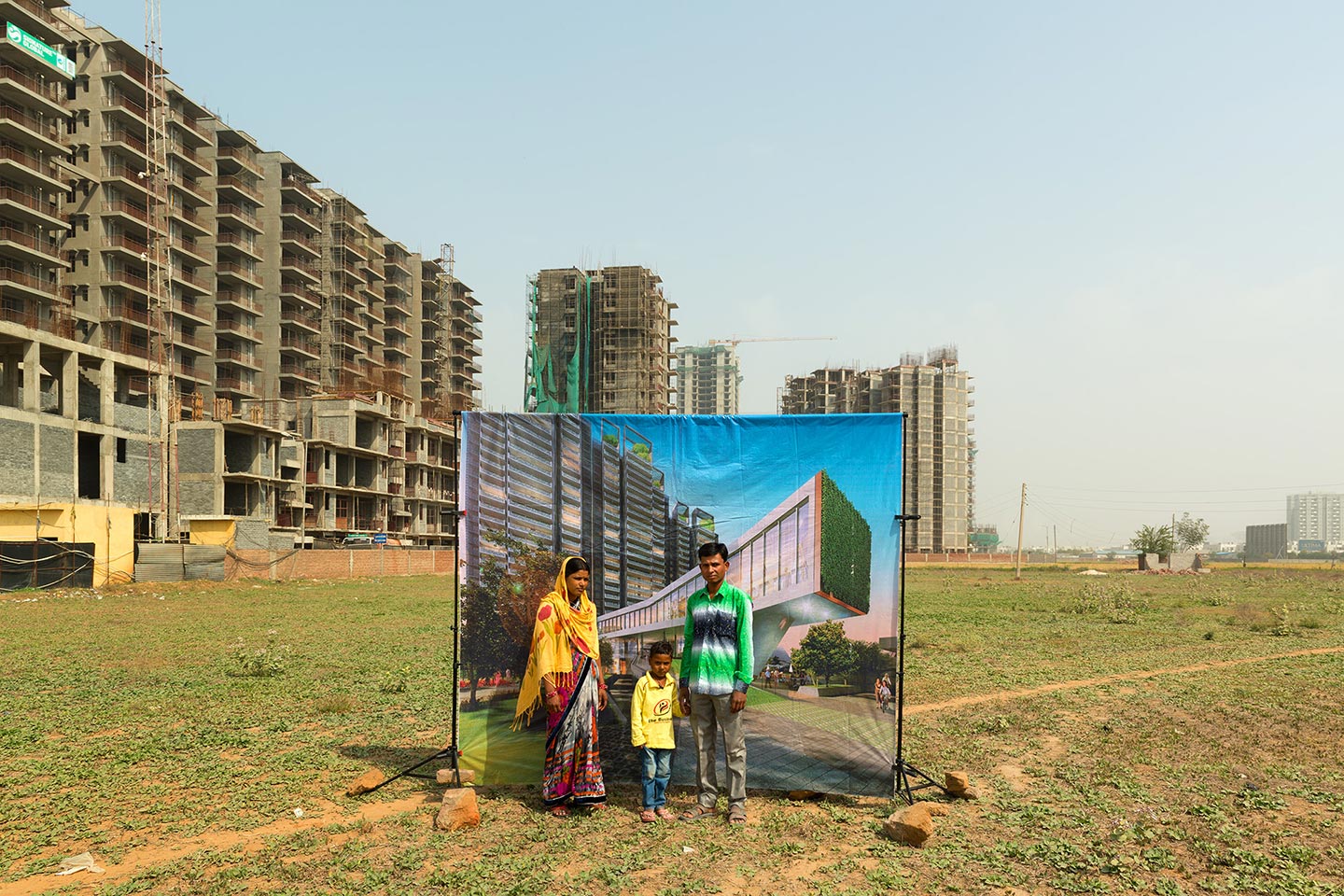 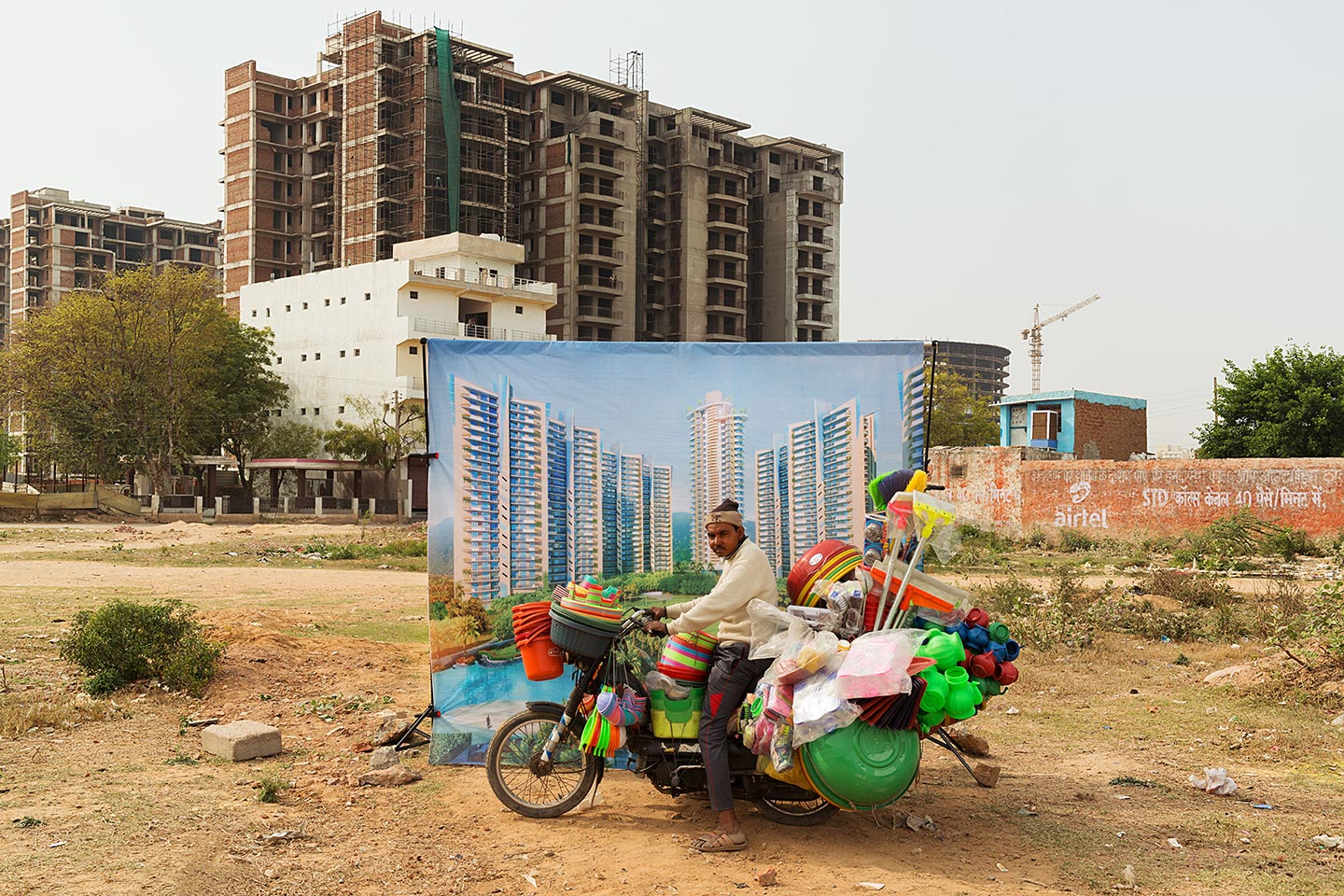 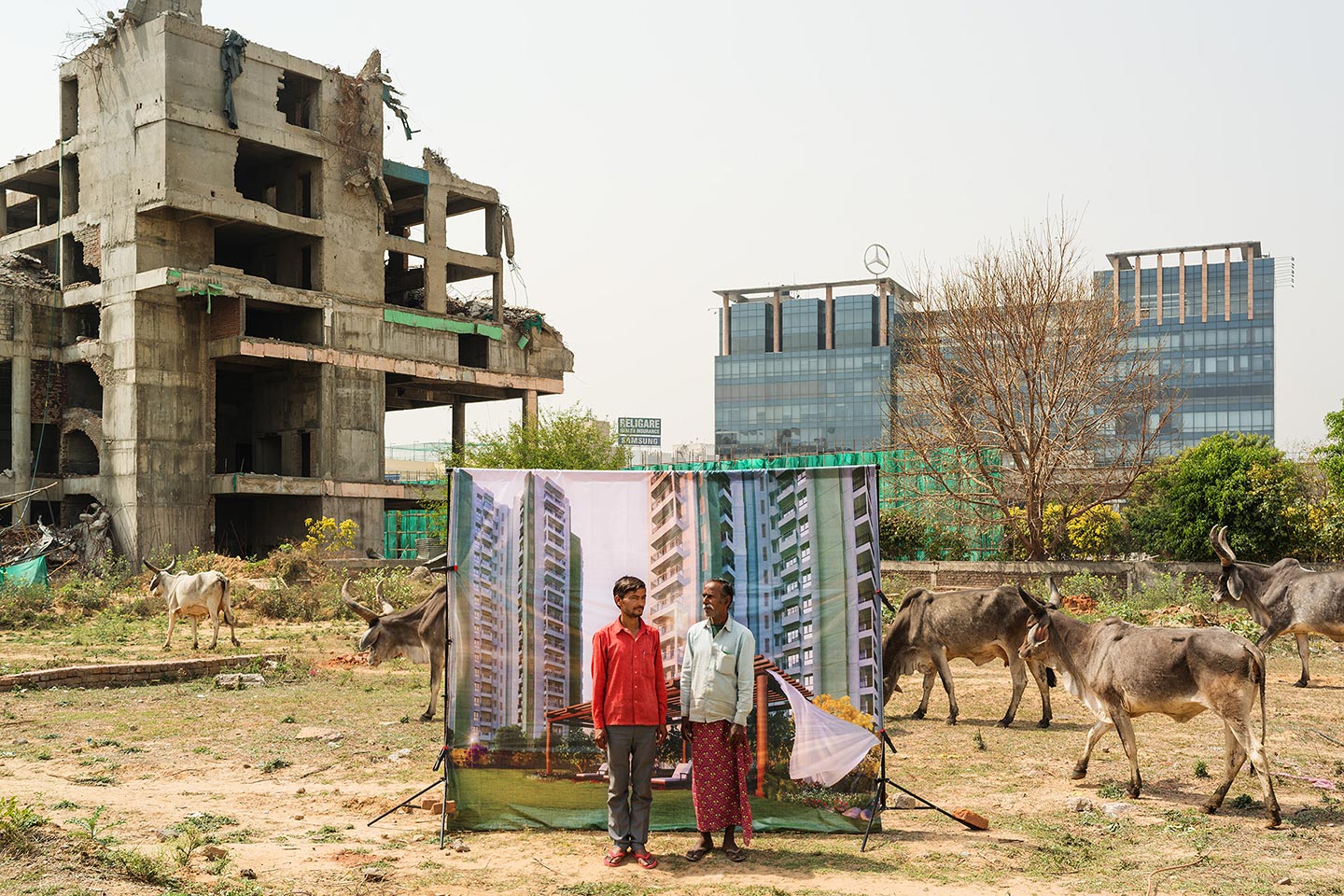 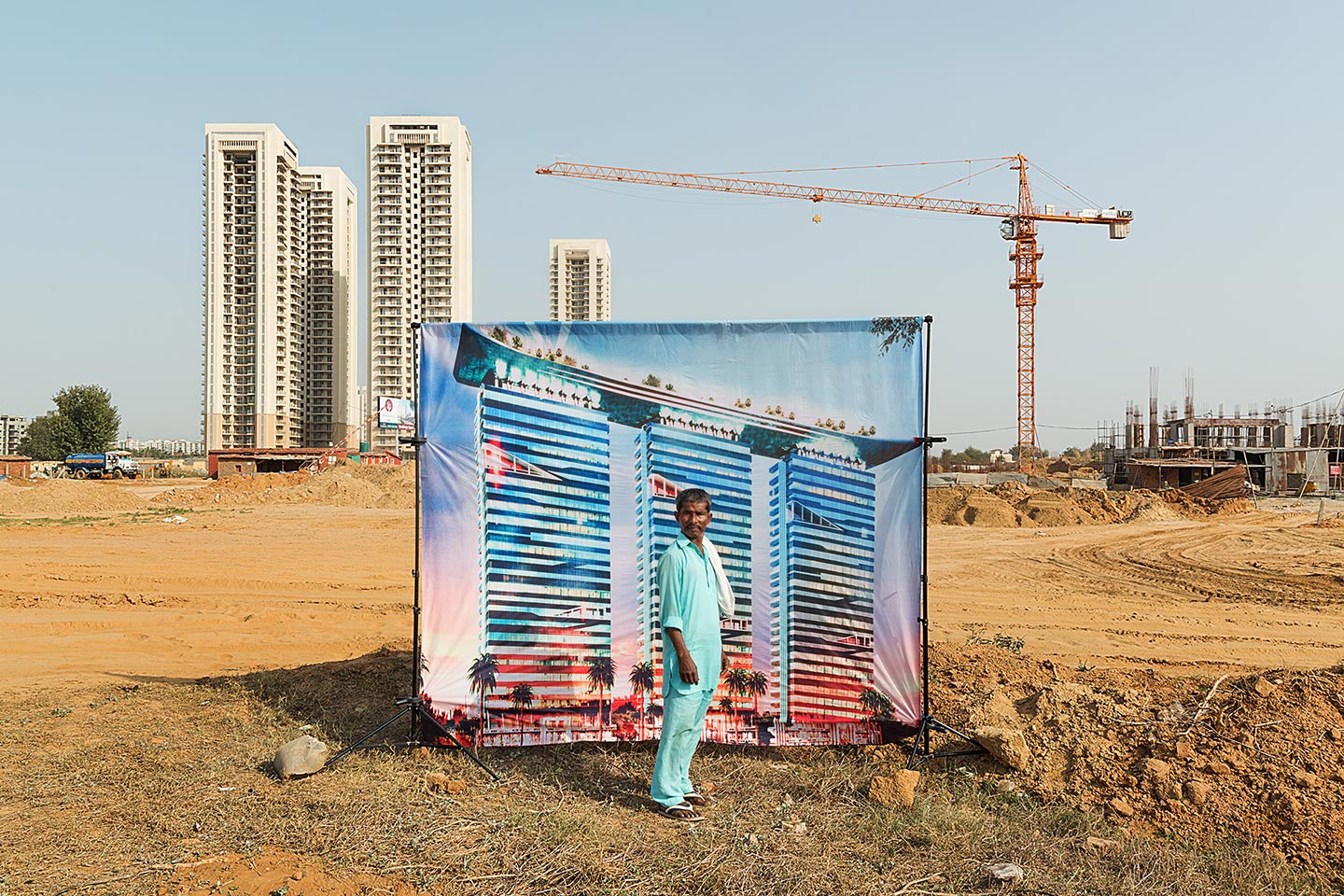 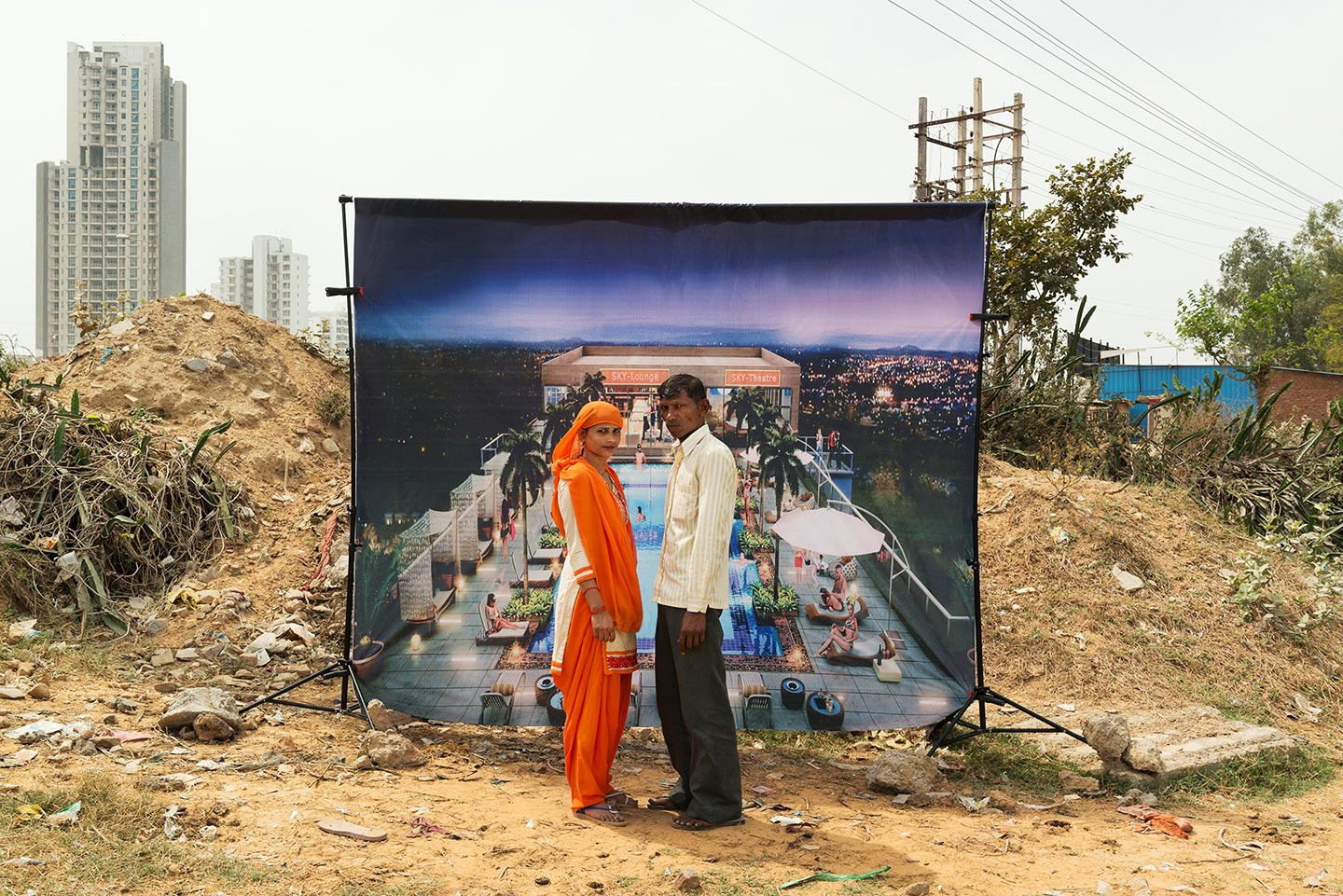 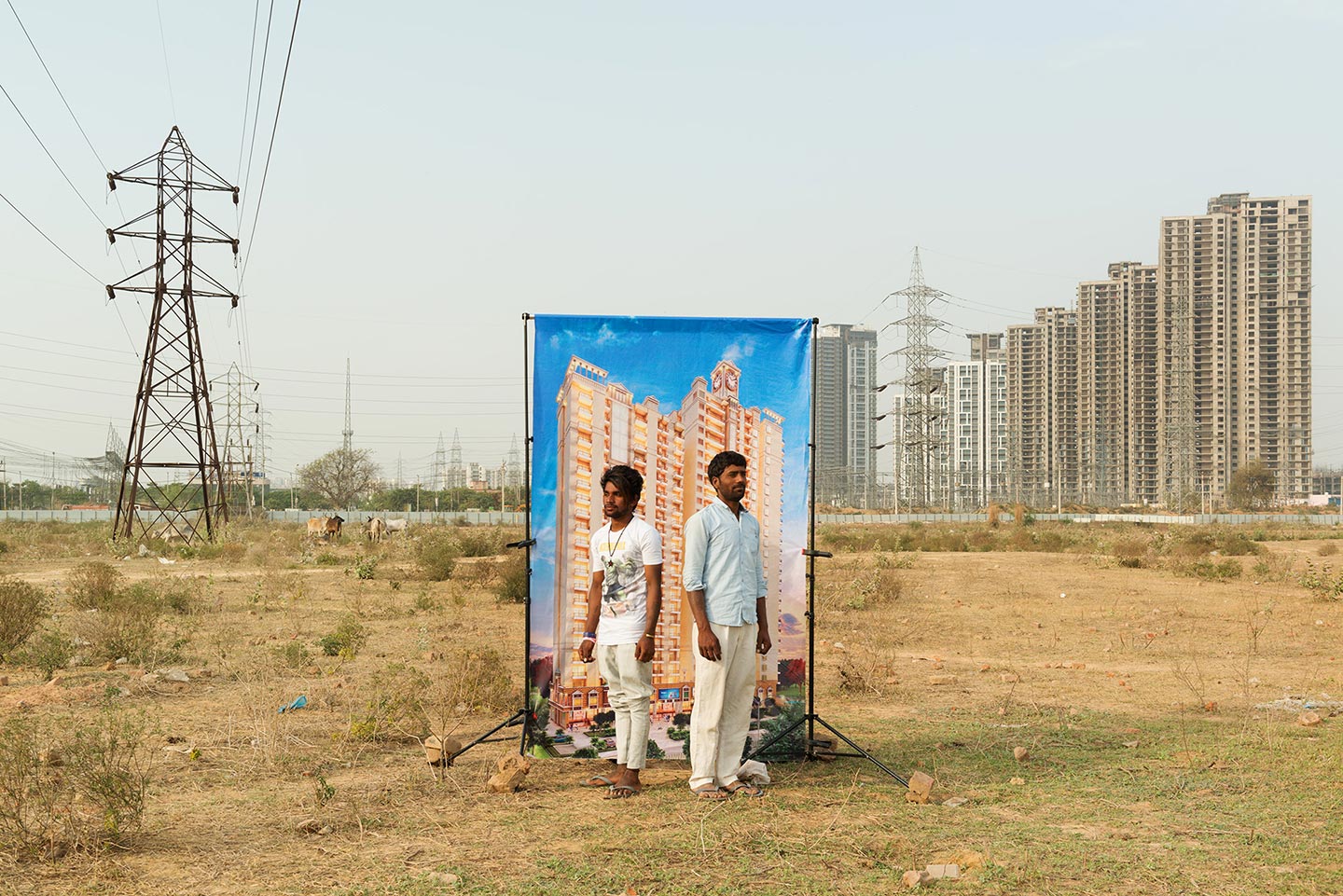 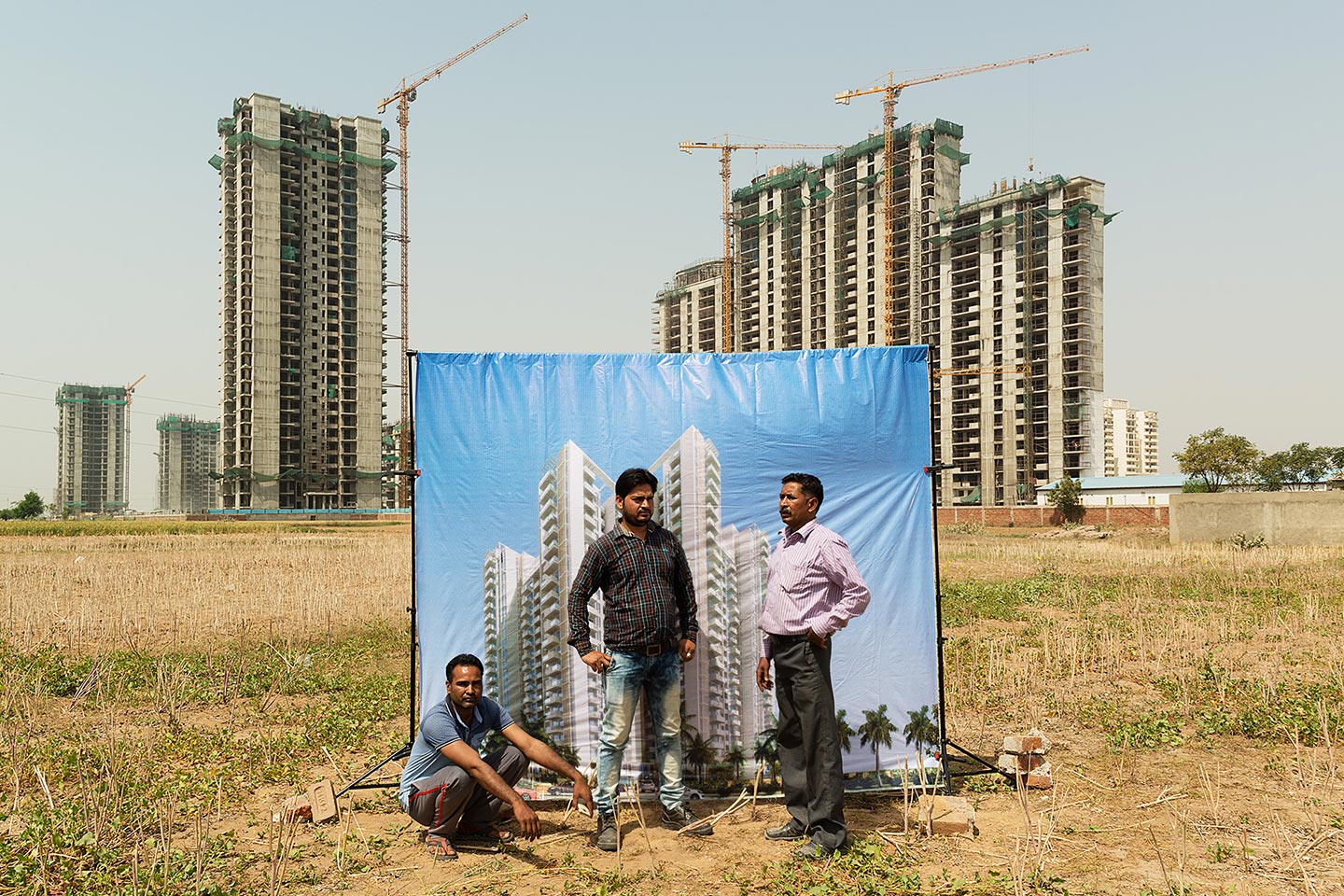 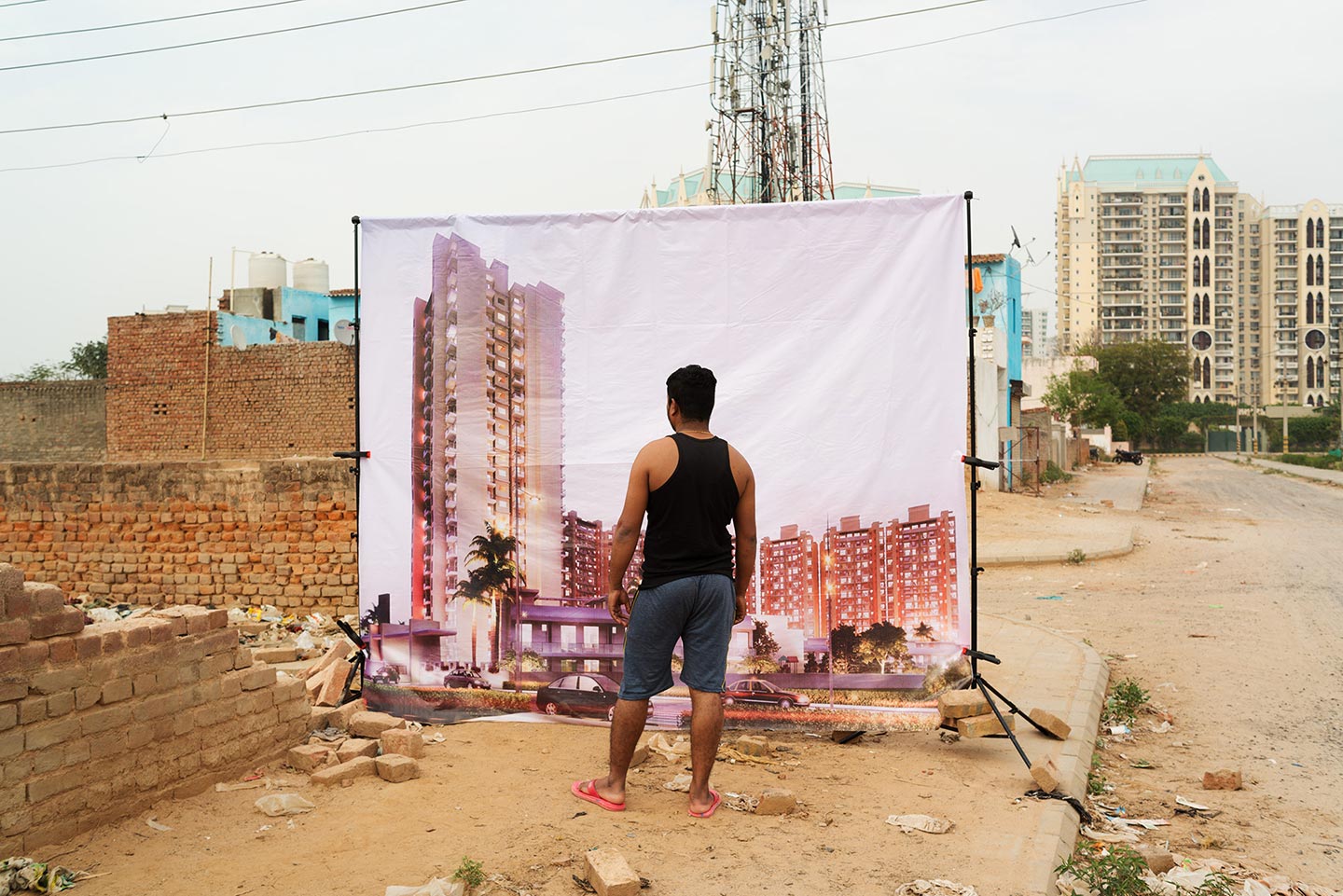 Bad City Dreams by 27 year-old French photographer Arthur Crestani is a series of staged portraits made in Gurgaon, a booming Indian city. “The idea was to appropriate the Indian tradition of portrait photography” Arthur explains, “using illustrated backgrounds and inviting people to pose before the camera to question the visual making of contemporary Indian cities.

Traditionally, Indian portrait photographers use hand-painted backdrops depicting dreamy landscapes; I replaced those landscapes with blown-up images from glossy real-estate brochures. And rather than working in a studio, I chose to shoot in the fast-changing landscapes of Gurgaon, a city 20km south of Delhi, where lax regulation and a massive influx of cash have transformed an anonymous village into a city with a two million population, today viewed as a model for contemporary India.”

Arthur first arrived in India in 2010 for a year-long exchange program. “I studied at the Jawaharlal Nehru University in Delhi, a public university well-known for its progressive policies and left-wing politics. I returned to Delhi many times after that, for long stays each time. Bad City Dreams was inspired by the exuberant real-estate ads that you see in every corner of Indian cities. At first you find them amusing, with their over-the-top taglines and visuals; then they depress you, as what they promise is in jarring contrast with the bleak reality of polluted and congested cities. Of course, the other strong inspiration for this project was the Indian tradition of portraiture, characterized by the use of illustrated backdrops.”

With Bad City Dreams, Arthur intends to throw a light on the role images play in the making of contemporary Indian cities. “The visual element is paramount in this new urban form, as local governments and real-estate developers push forward the idea of making (in their own words) “global” cities with “world-class” amenities. References to Singapore, Dubai and Tuscany are everywhere. They elude the realities of projects located at the periphery of the Delhi metropolitan region, where infrastructure and public services are non-existent. In spite of their limitations, these projects do appeal to the aspirational urban middle-class.”

“The new urban fabric, consisting of secluded islands of prosperity, excludes the majority of the population: the migrant workers and uprooted villagers who are the lifeline of the city. They are the people I photographed, not for want of only showing the disenfranchised “others”, but because they are the people you meet on the street, at construction sites and on unused land plots. They, too, are part of the reality that the discourses on modernization tend to erase. The backdrops had a very strong appeal on people: using them changed the complexion of the scenes, which suddenly went from unsuitable for portraiture to worthy of having their photograph taken. This taste for the visual might explain the exuberance of the ads.”

Arthur’s main inspirations for Bad City Dreams were “anthropologist Christopher Pinney’s book Camera Indica: the Social Life of Indian Photographs, for which he studied the changing practices and uses of photography in a small town in Central India; Katherine Boo’s Behind the Beautiful Forevers was a more literary inspiration. Coming to photographic influences, Olivier Culmann’s The Others, Daesung Lee’s Futuristic Archeology and Samsum Alam Helal’s Love Studio were important.” Arthur wishes “this project helps viewers understand a facet of contemporary India. This changing country is driven by a new brand of consumerism, full of contradictions and conflicting representations. I hope to generate in viewers the same uneasy empathy I felt towards the people I photographed.”

The place as a “political, social and economic process” is Arthur’s main interest in photography: “Urban spaces, in particular, interest me because they are the product of conflicting ideologies, ambitions and hopes, from the macro to the individual levels. The city can be read as a juxtaposition of such layers. I am very interested in the visuality of the urban experience: a city is an image, as much as a place. It is a projection of various representations. The discrepancy between the idealized and imagined representations of the city and the roughness of contemporary city life is a key trait of our societies. We live in a world that’s increasingly consumed as an image. Cities, as sites of production of these images, and objects of representations themselves, are the crucible of our dreams and desires. But beyond the field of representations, increasing segregation and violence actually crush these fantasies.”

“Coming from a background in social sciences, I primarily look at the social and political processes at stake in the places I photograph. The theory of the “city as spectacle” you find in French sociologist Henri Lefebvre’s work, in particular, has left a strong impression on me. In regards with photography, the movement of the New Topographics had an early influence on me.”

Some of Arthur’s favorite contemporary photographers are Gauri Gill and Dayanita Singh, both Indian (“In very different ways, they tell intimate stories of the world with great subtlety“). He also finds the works of Eric Tabuchi and Max Pinckers “incredible“. The last photobook he bought was Men of Rajasthan by Waswo X. Waswo.