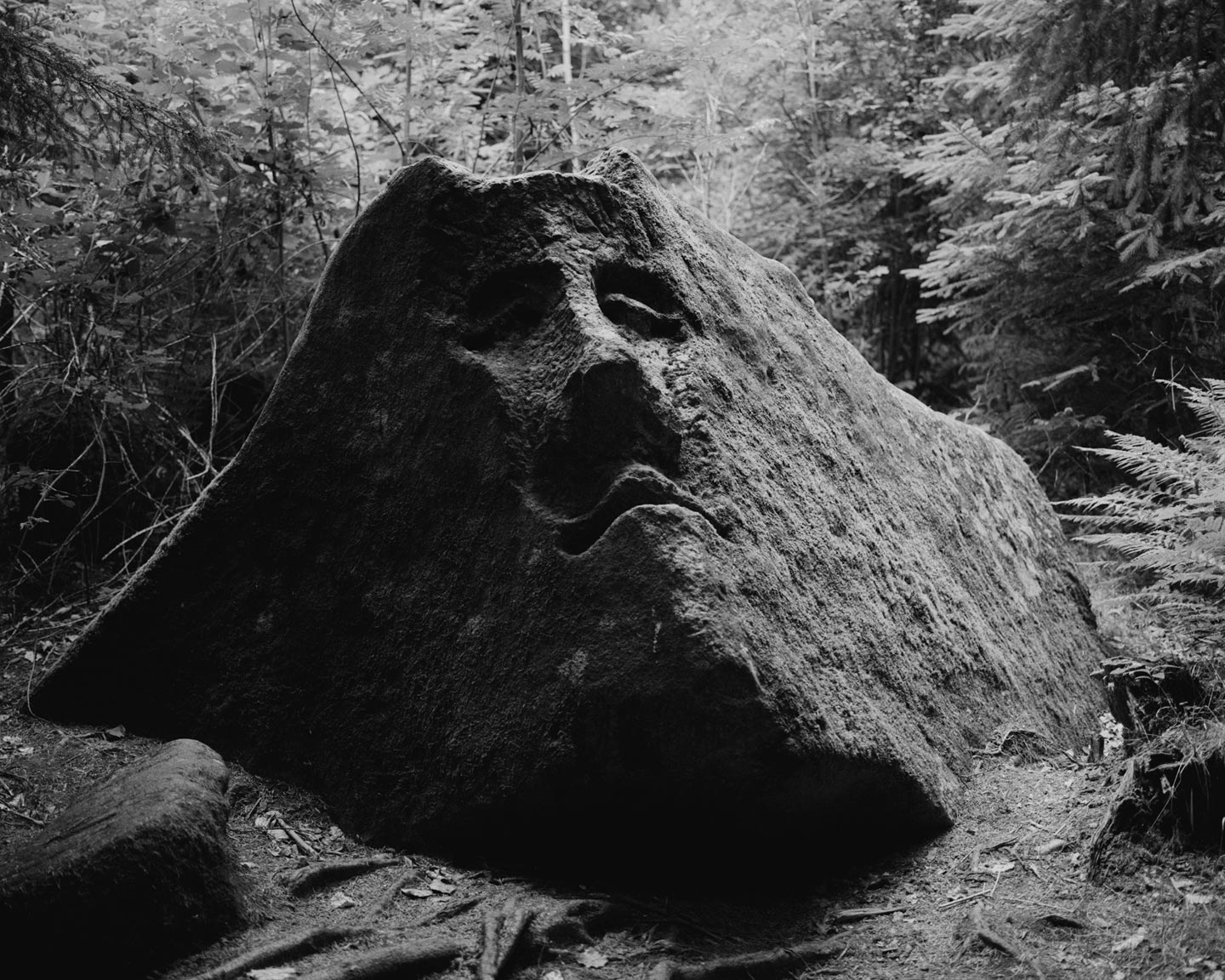 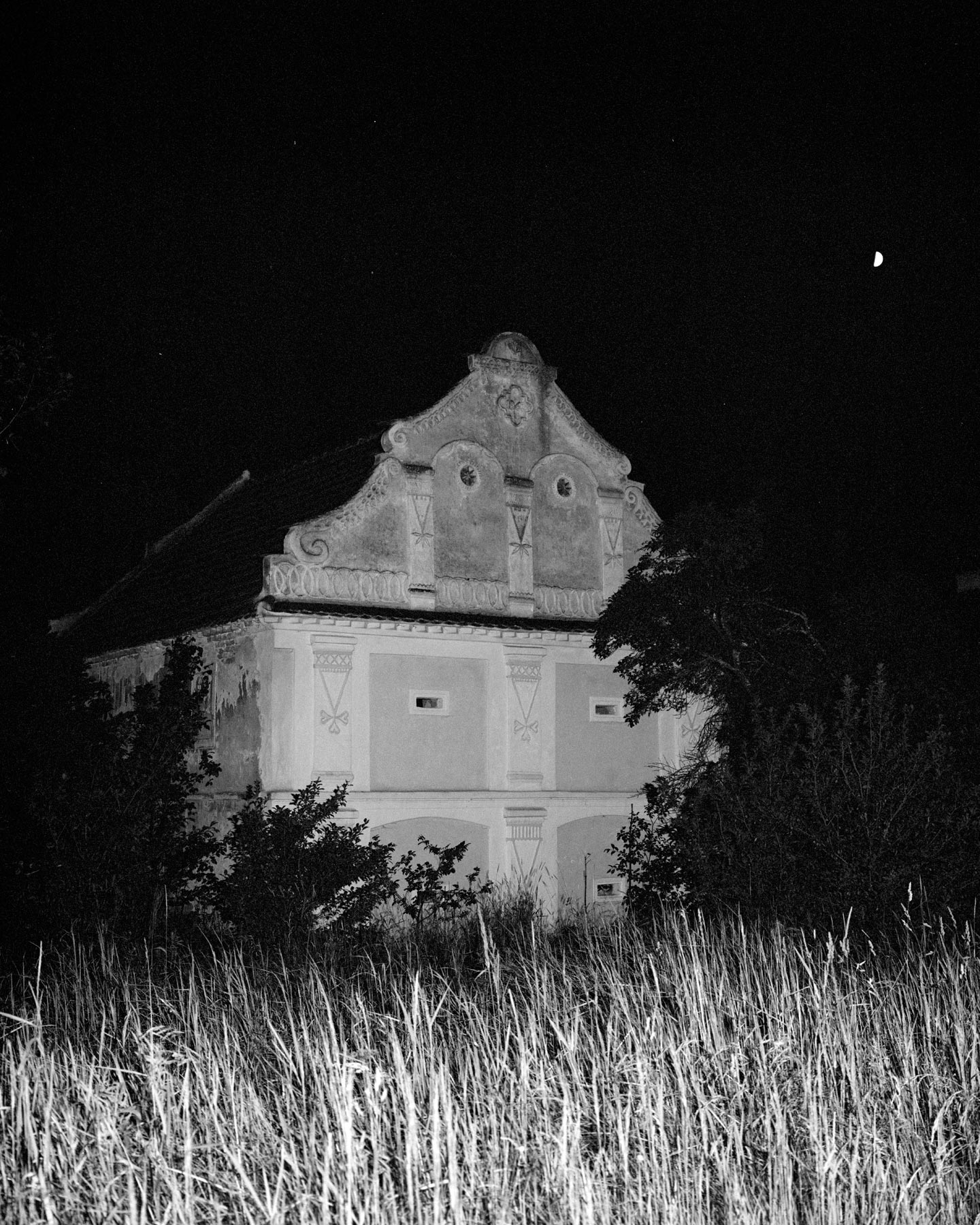 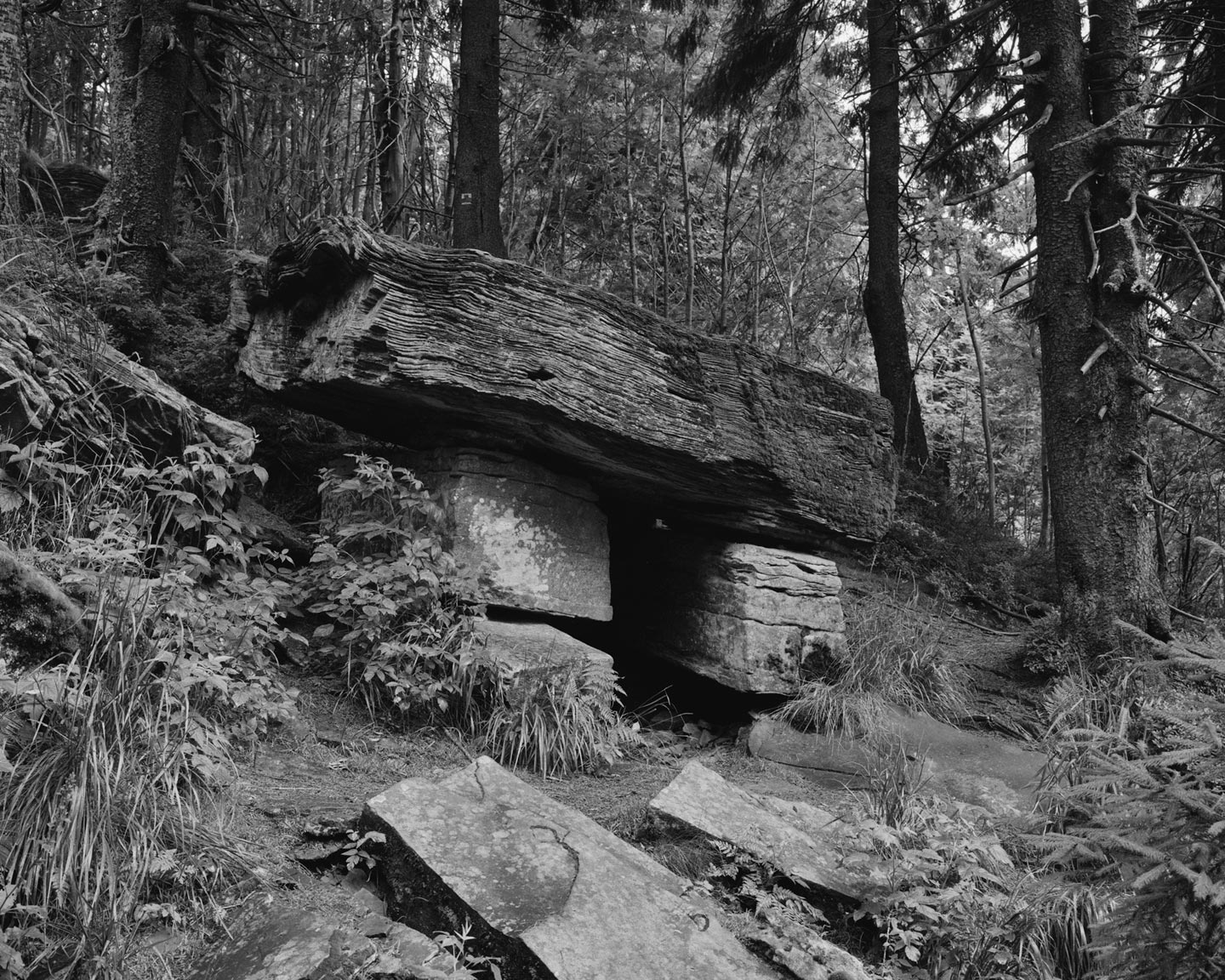 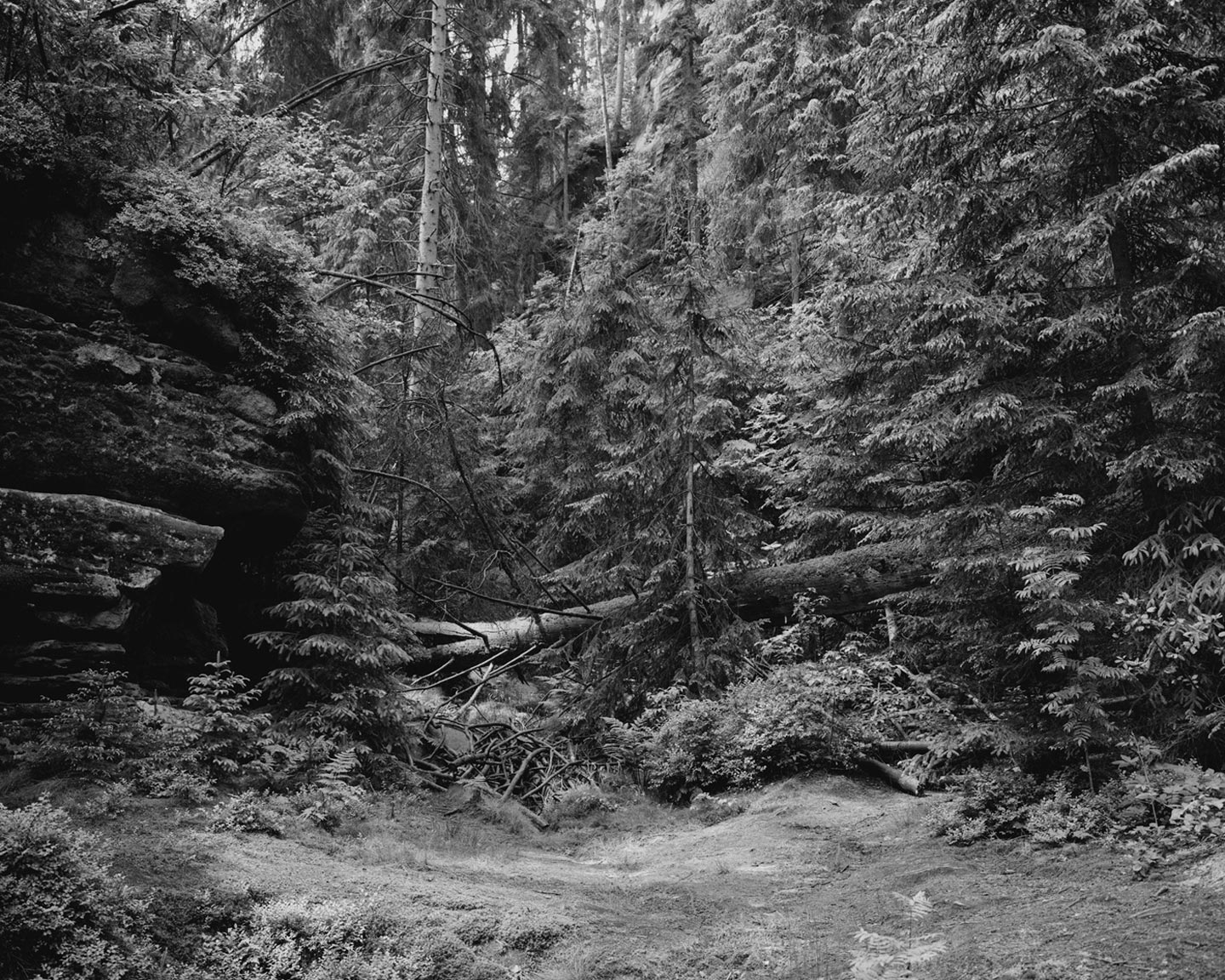 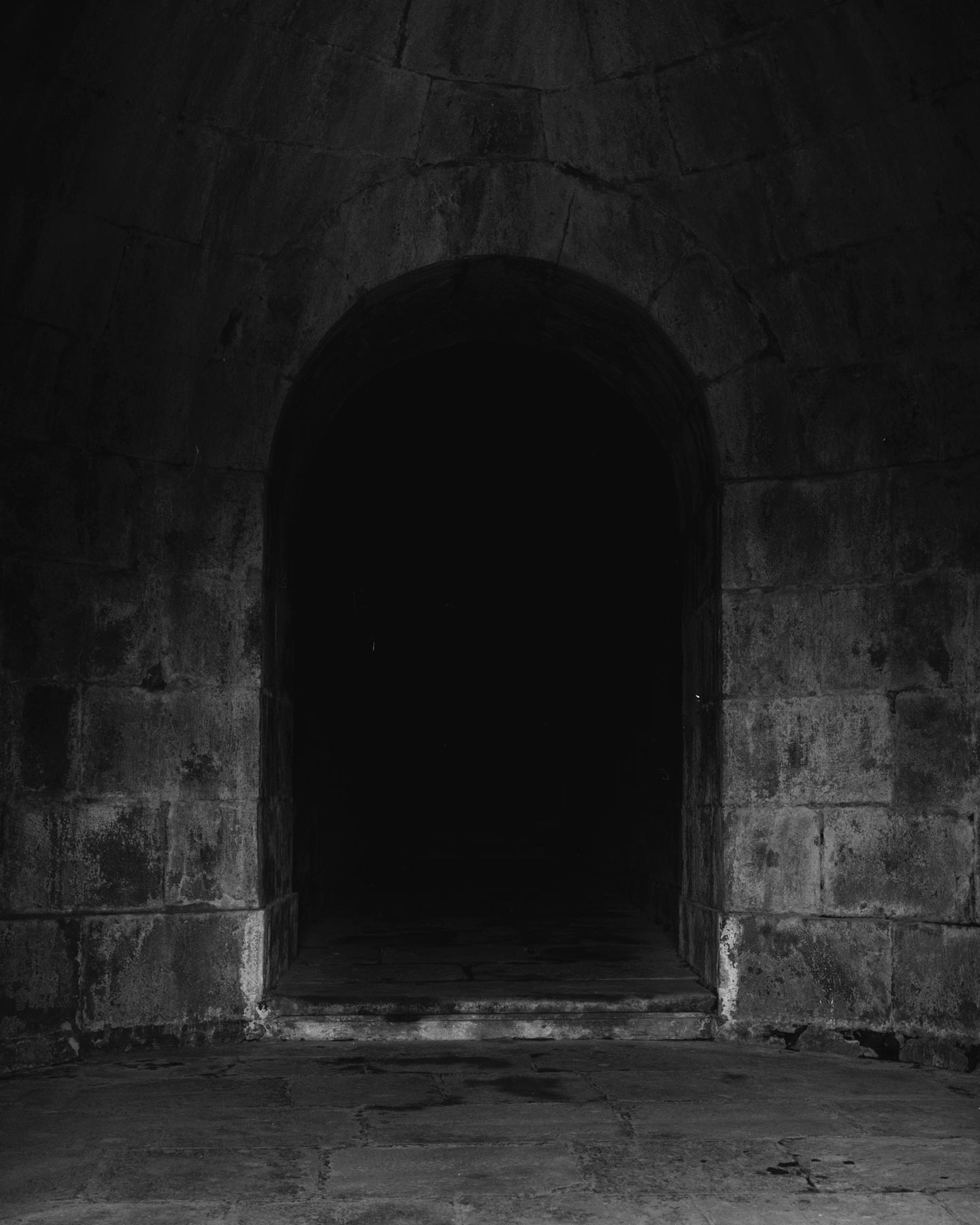 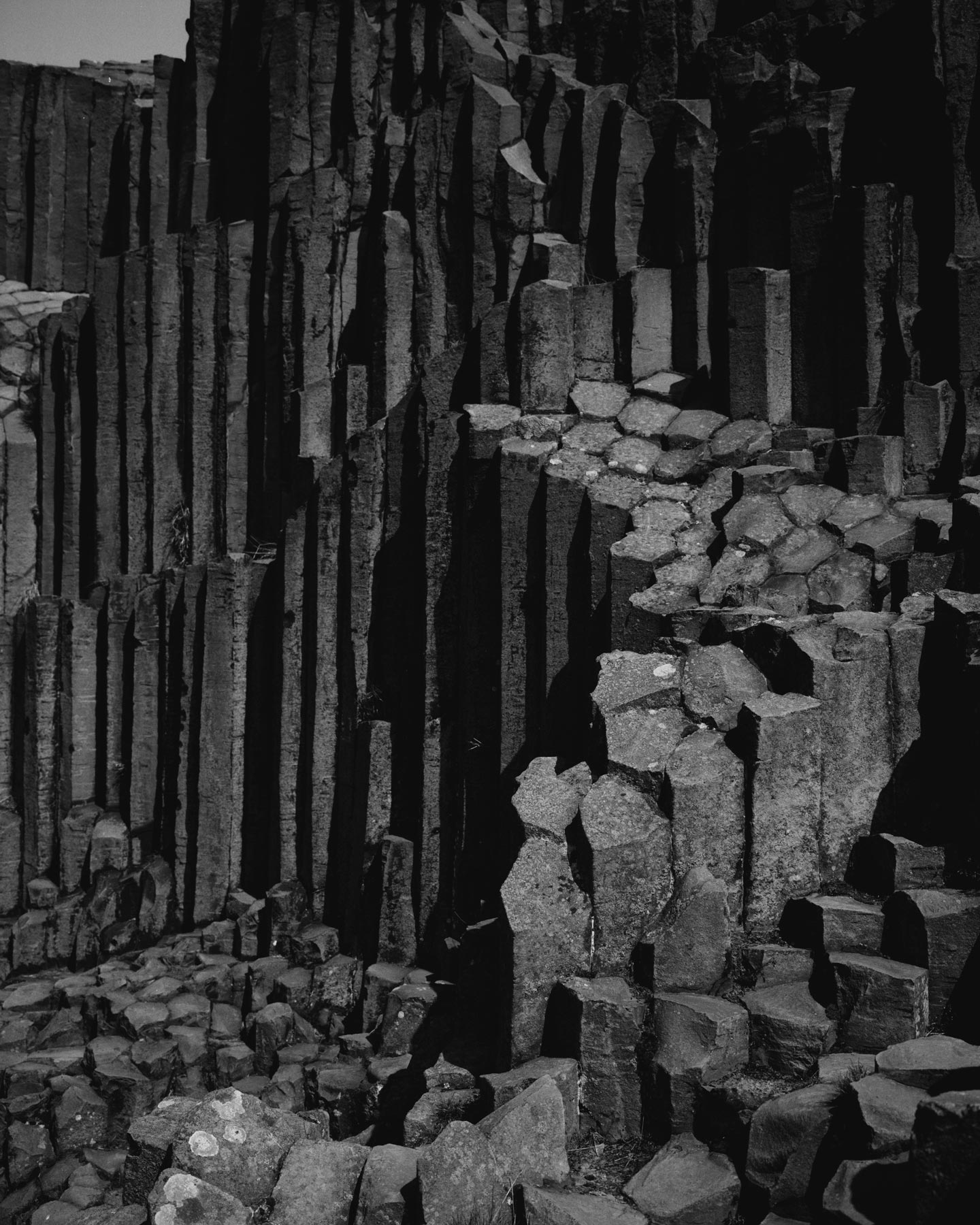 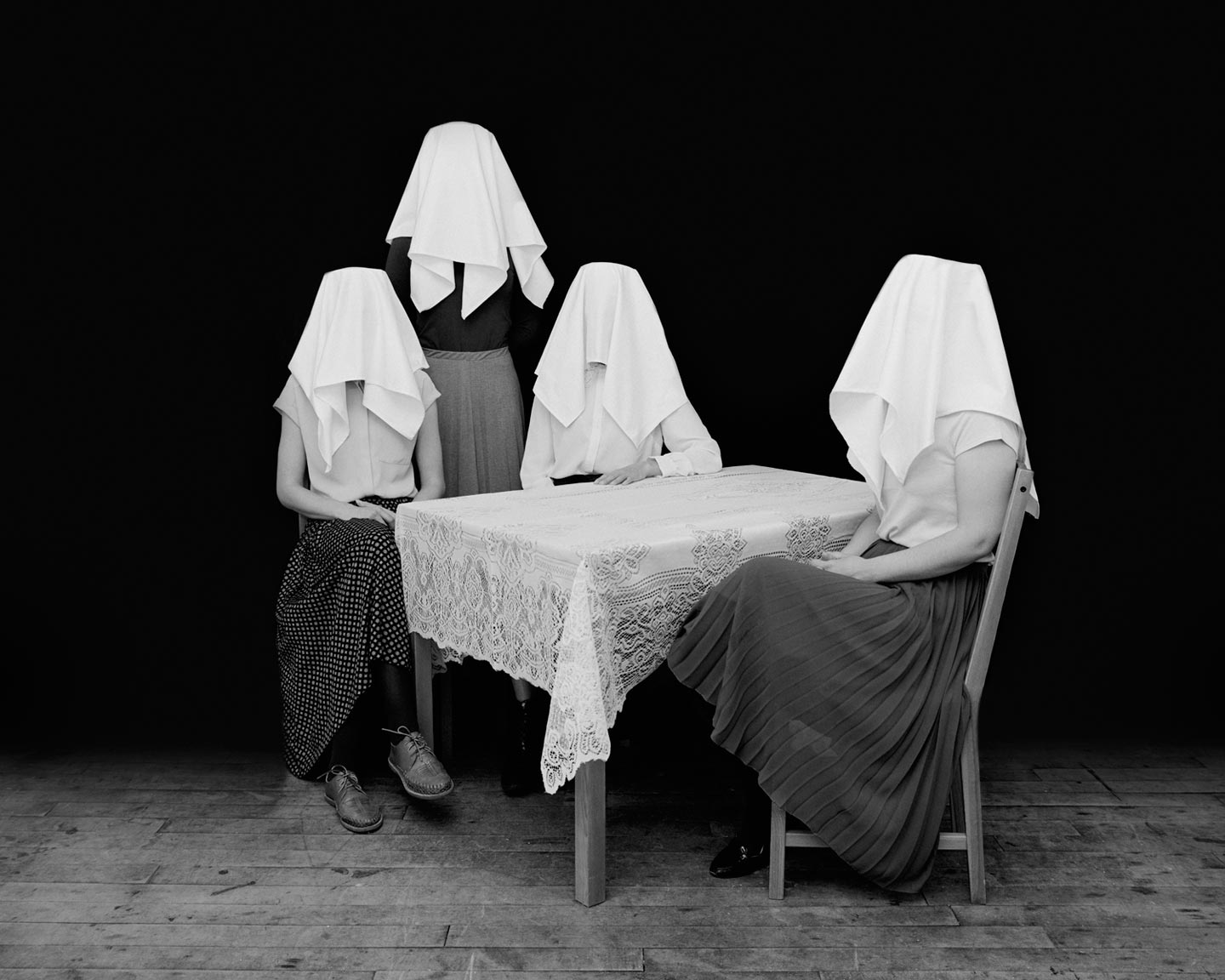 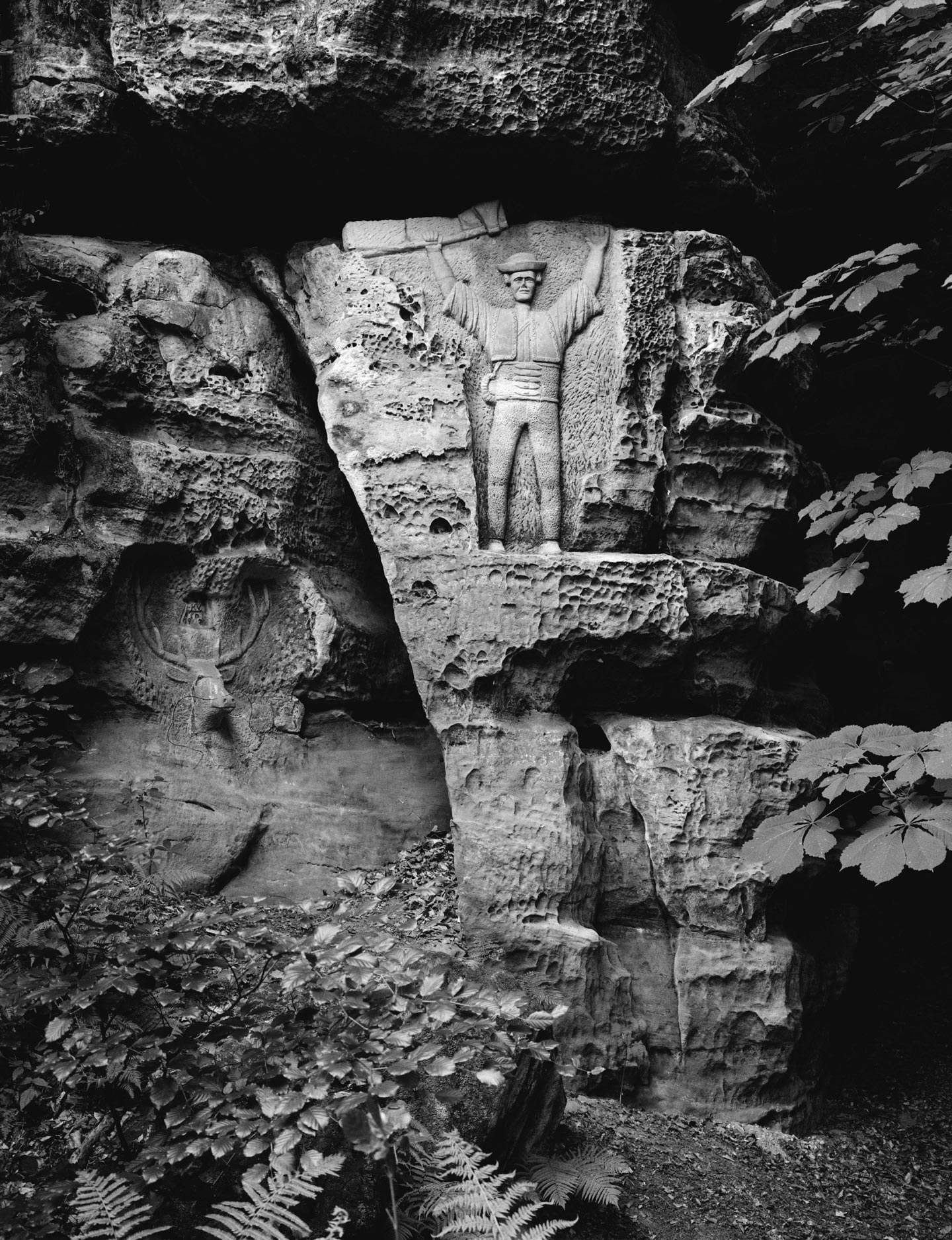 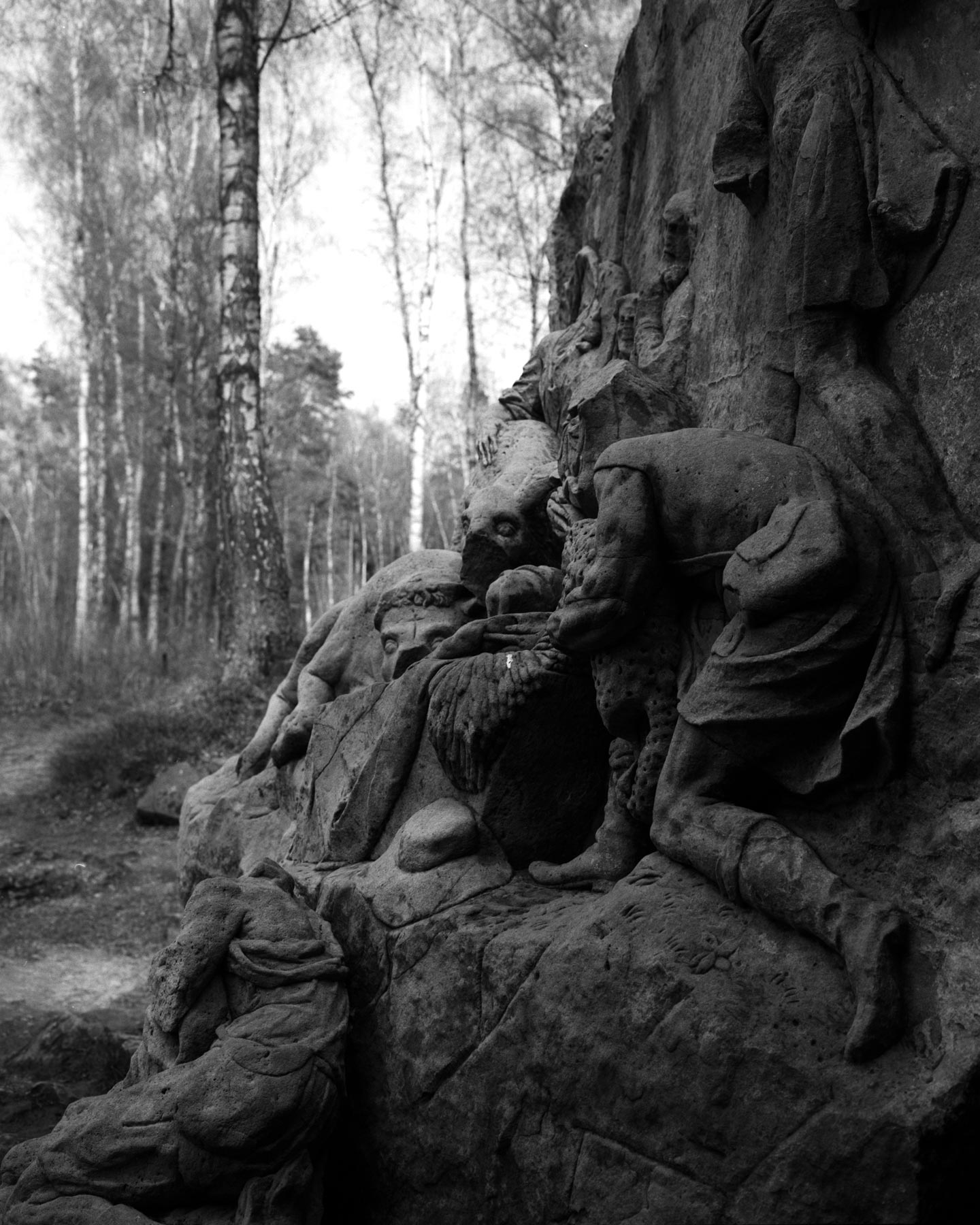 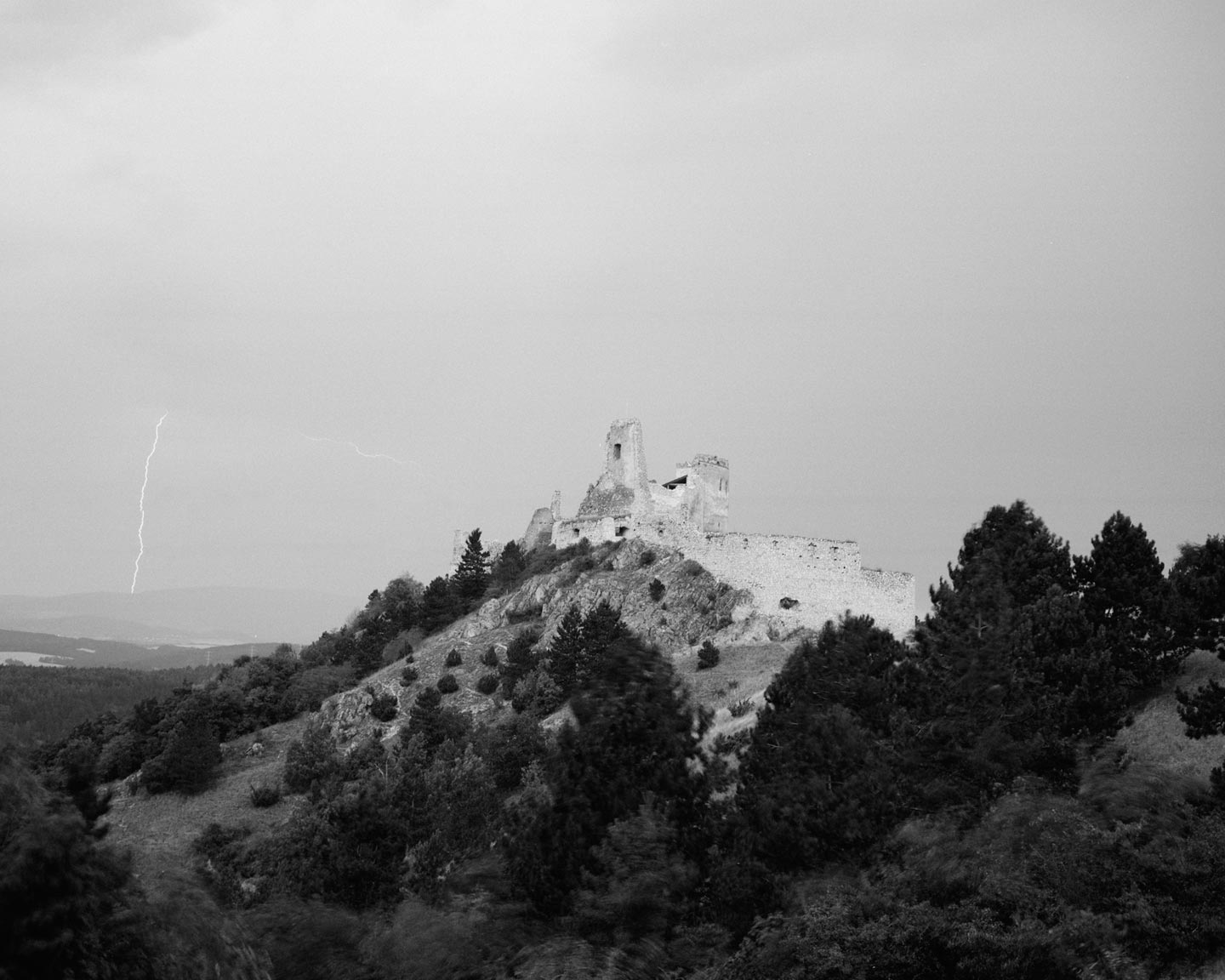 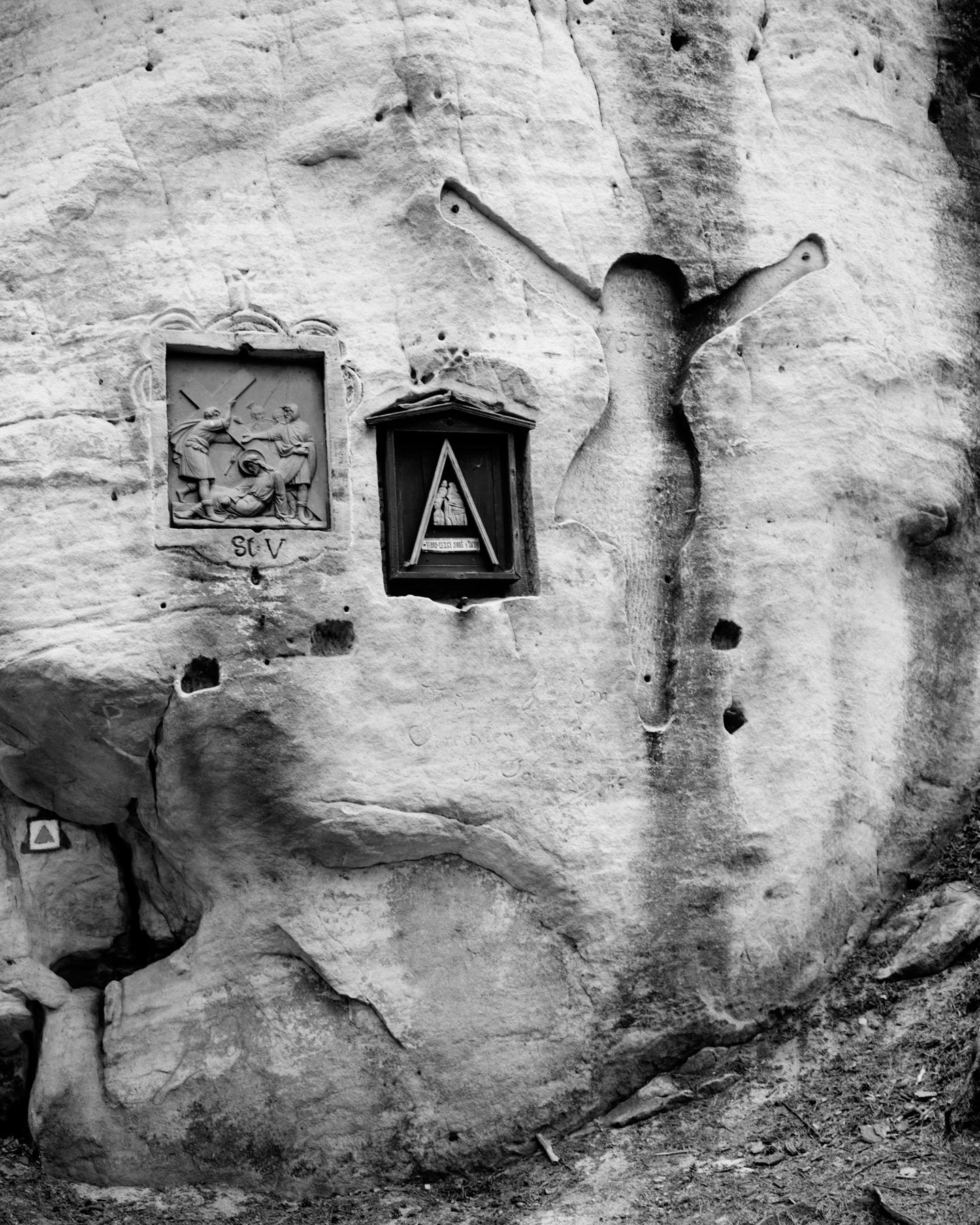 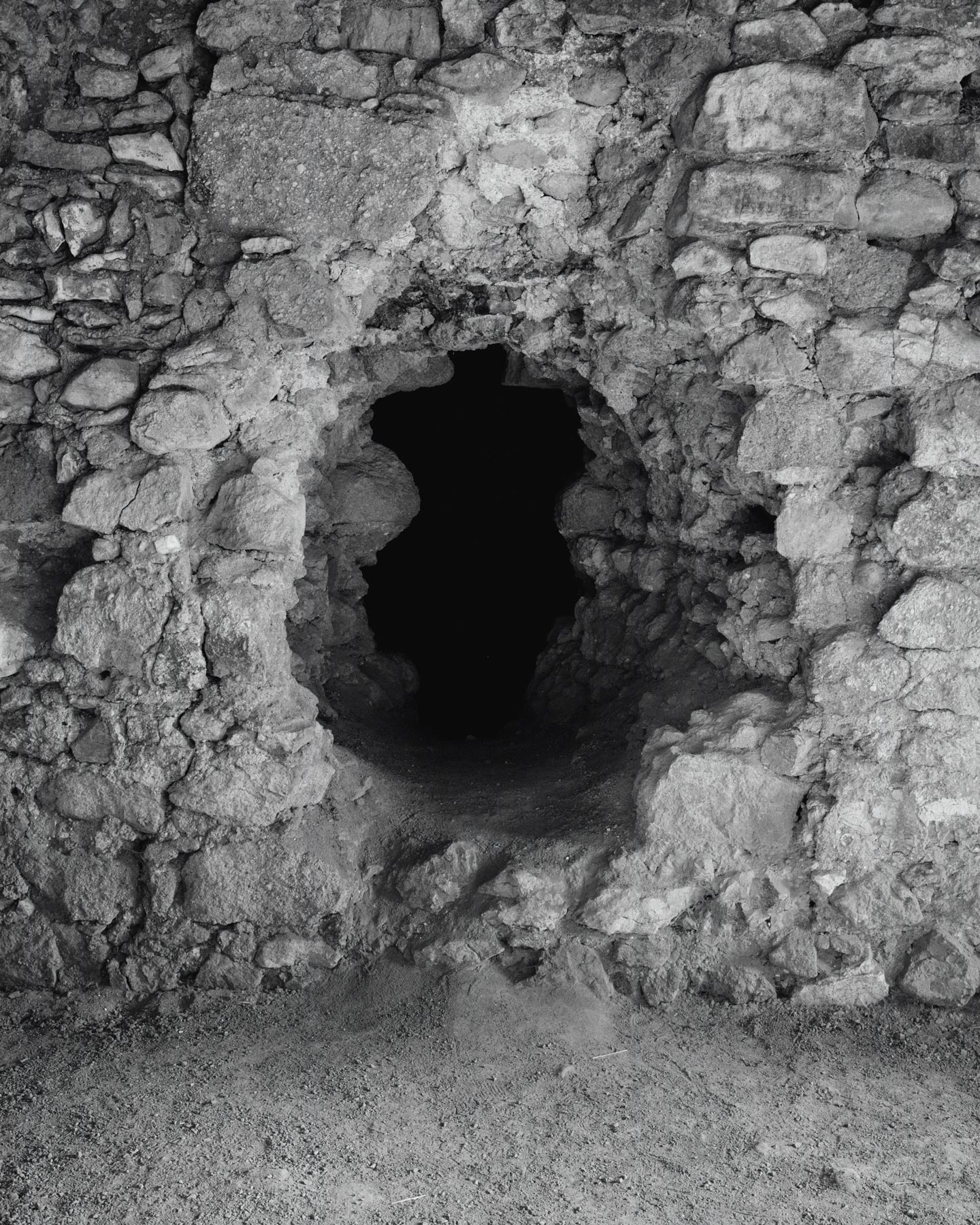 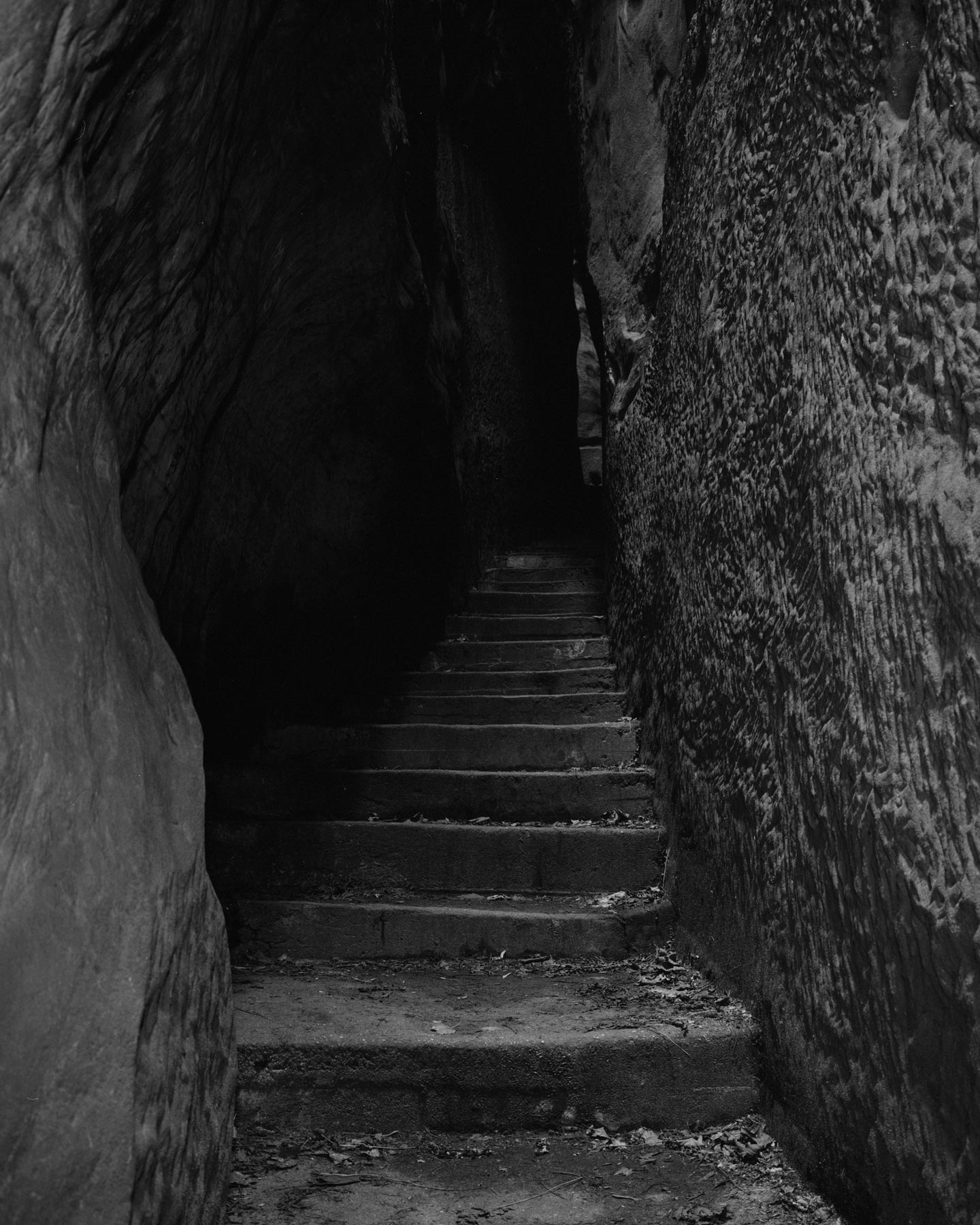 It makes sense that the latest body of work by 31 year-old Czech photographer Tereza Zelenkova is untitled: being the unfathomable the main ingredient of both what she photographs and the way she photographs it, the lack of a title adds to the mysterious theme of her work. The black&white photographs of the project show locations across the Czech Republic surrounded by dark myths and legends…

Hello Tereza, thank you for this interview. What are your main interests as a photographer?

What drives my photographic practice is probably the desire to explore the same things that interest me as a person in general. I’ve been always attracted to particular kind of mythologies and stories about people and places. What I like about traditional analog photography is that you have to work with reality but you can twist it through cropping and sequencing to create a sense of a quite surreal and ambiguous world always oscillating between fact and fiction.

Mystery, enigma and the unseen are recurring ideas in your practice. Where does your interest in these themes stem from?

For me, everything that is beautiful needs to evoke an idea of mystery and death, something beyond the scope of rational explanations. In my work, I try to capture things that I cannot describe with words but want to communicate and share with likeminded people. I don’t necessarily mean individual images, but an overall outlook on things.

Please introduce us to your latest, untitled series: what is it about, fundamentally?

It is about a place that I call home, in the territory of former Czechoslovakia. The work is at once a documentary project mapping out places with interesting stories or surrounded by legends that somehow form my cultural sub-consciousness; and a humble attempt to nurture this relationship between men and the landscapes that they inhabit by adding few new stories and places that are somehow important for me personally, and are tied to my own experiences.

What inspired this body of work?

I guess my practice sits at the crossroads between documentary and conceptual photography, in the sense that I often use photography to document places that I find interesting for particular historical reasons or in reference to a literary work, etc. At the same time, I take the liberty to mingle these shots with staged photographs, and I tend to bend the facts or dismiss them all together in the resulting series.

My current ongoing project lends itself very well to this way of working, plus the main drive to make it has been to raise awareness about all these locations in my home country that are often neglected or on the other hand, overrun by tourists. I’d like to propose a more balanced and mutually beneficial relationship between people and the place they live in. After being away from Czech for many years, I’ve only recently started to realize what a great impact the environment you grow up in can have on you. It can never be erased and it will be part of who you become. I think people should think about that more and contemplate whether they want to see landscape as merely something providing us with raw materials, or something that also feeds our imagination and teaches us about the higher order of things.

Can you make some examples of the places you photographed, and the myths or stories connected to them?

I’ve been interested in a practice quite common in some parts of the Czech Republic which consists in carving relief sculptures on stones and rocks found in the nature. The variety of these sculptures ranges from the breathtaking Baroque works by Matyas Braun to a sort of amateur and politically charged 20th century carvings by Vojtech Kopic. There are also many ambiguous and quite mysterious smaller reliefs, like the stone from my photograph ‘Dog Cemetery’.

The work also refers to legends or tales surrounding some castles: the Houska Castle was supposedly built to conceal a gate to Hell, while the Cachtice Castle in Slovakia was home to one of the most prolific serial killers, Elizabeth Bathory, who tortured and murdered young country girls in order to bathe in their blood and gain eternal youth.

One of my future goals is to go back to the Byci Skala cave, which was the subject of a small zine I made with Peter Watkins some time ago. It’s a place that spans an unbelievably long period of time—from 10,000 BC till today—and it’s part of a larger sacred site formed by other caves and caverns. The cave is mainly known for a series of archeological findings from around 700 BC and for supposedly hosting the ritual sacrifice of some forty young women.

There’s a lot more but I guess you get the idea!

Based on what do you select the locations you’re shooting for this series?

I’m a curious person and I follow many different leads and strands, and see where they take me. There’s a lot of interesting writing on the Czech landscape by Vaclav Cilek—his books are a never-ending source of inspiration when it comes to Czechoslovakia and its history. There are tons of interesting references and facts in his books, and his poetic approach the subject is really close to my own view of nature and culture, and how they intersect.

Did you have any specific references or sources of inspiration in mind while working on this project?

I’ve been certainly influenced by many literary works. This is probably due to the fact that I am looking at the landscape in a very romantic way, so it makes sense that I’m more drawn to fictional works and the way writers perceived my country. When it comes to rural settings, I can’t get away from being influenced by classic Czech writers whose works are engraved in most Czech people’s minds, such as Karel Jaromir Erben or Karel Hynek Macha. There’s also many classic fairytales that are set within this landscape, ranging from Czech writers like Bozena Nemcova as well as Hans Christian Andersen and others. I am also reading works by Johannes Urzidil, and of course Gustav Meyrink is always a huge source of inspiration when it comes to all things mysterious.

Visual references are quite broad but I guess it’s the same kind of stuff that has influenced me in general, such as the Decadent movement, Romanticism, Surrealism, etc. I am a huge fan of Walker Evans, Alfred Stieglitz, and Eugene Atget, and I also often draw inspiration from science or doctrines such as Spiritualism that use photography to their own ends. I carry all of this with me every time I take pictures: it’s part of my creative unconsciousness.

Ideally, how do you hope viewers will react to these images?

I hope they will look at them and get a sense of a place that is at once real but also retains an aura of mystery and ambiguity—kind of like a fairytale place, familiar and strange at the same time. I hope they will come back to some of the individual photos and be intrigued by what they show or why I took them, allowing me to share with them my cultural heritage. Art is like when someone invites you to their place and you quickly glance through their bookshelves while they make you a cup of coffee: in a few minutes you will know whether you can connect on some kind of higher level. I believe in love at first sight so if someone doesn’t like my images straight away, they probably never will.

It’s hard to tell as most of the works I tend to look at are by photographers who are no longer among the living!I truly admire Sally Mann. A few more names that come to mind: Todd Hido, Antoine d’Agata, Richard Learoyd, Hannah Collins, Collier Schorr, Alec Soth.