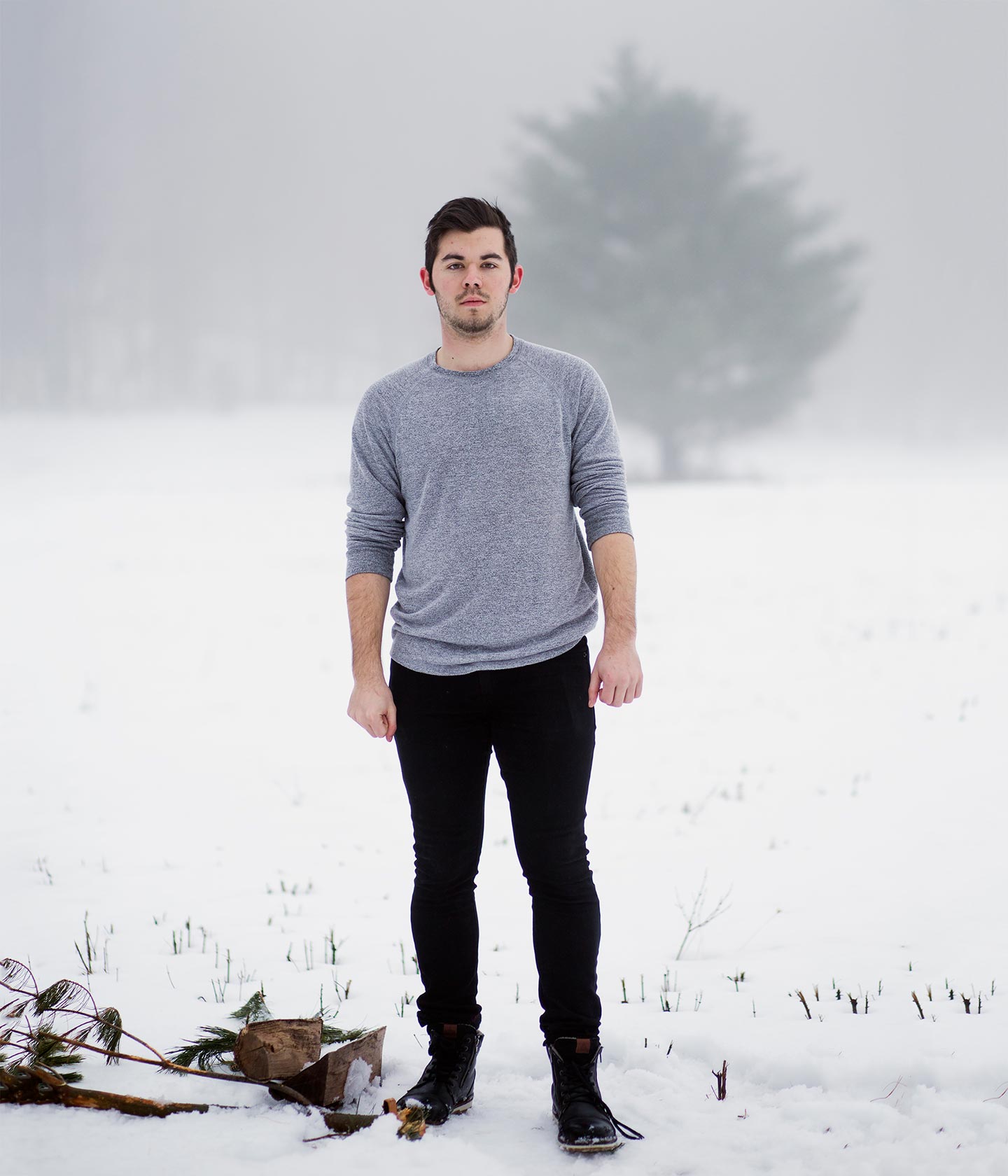 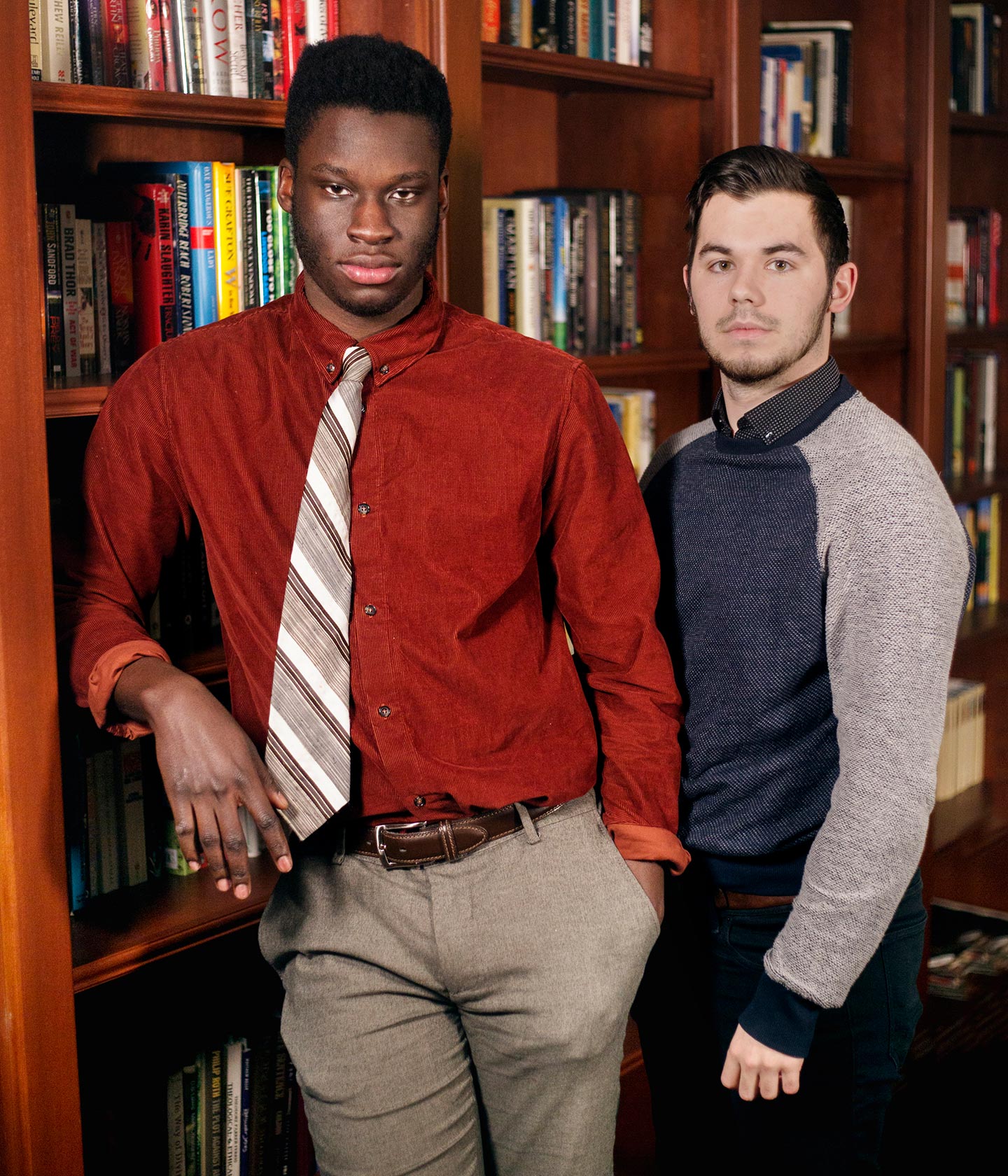 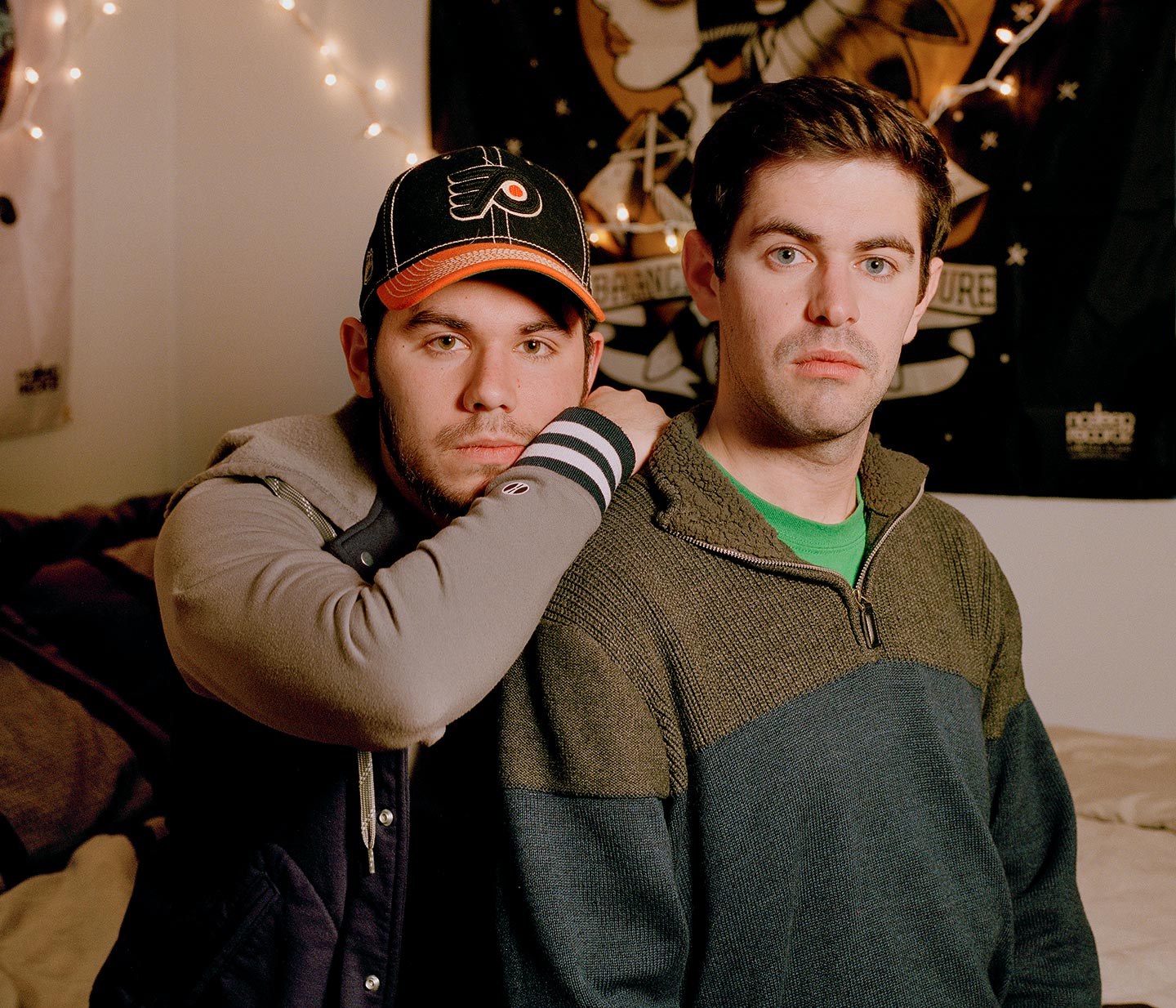 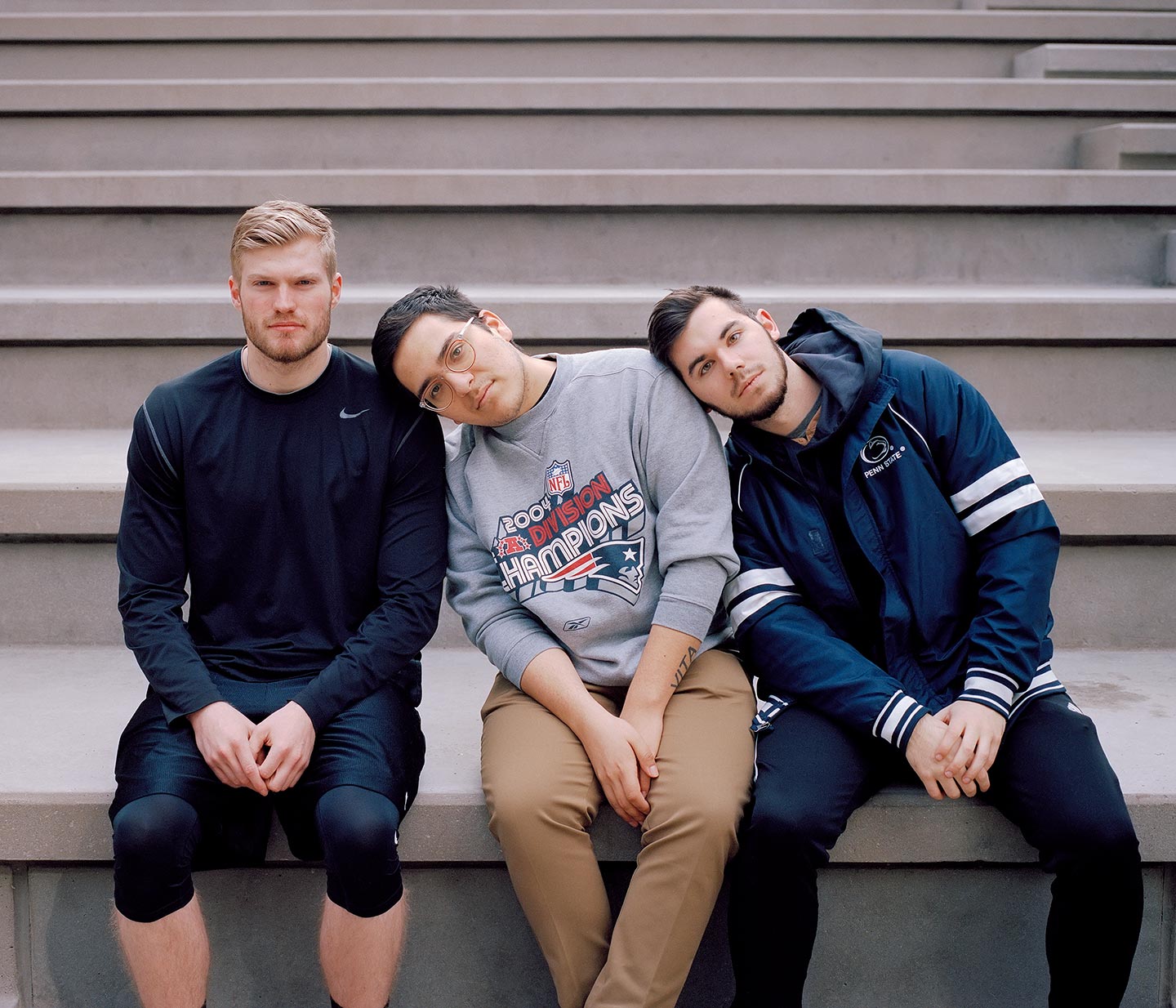 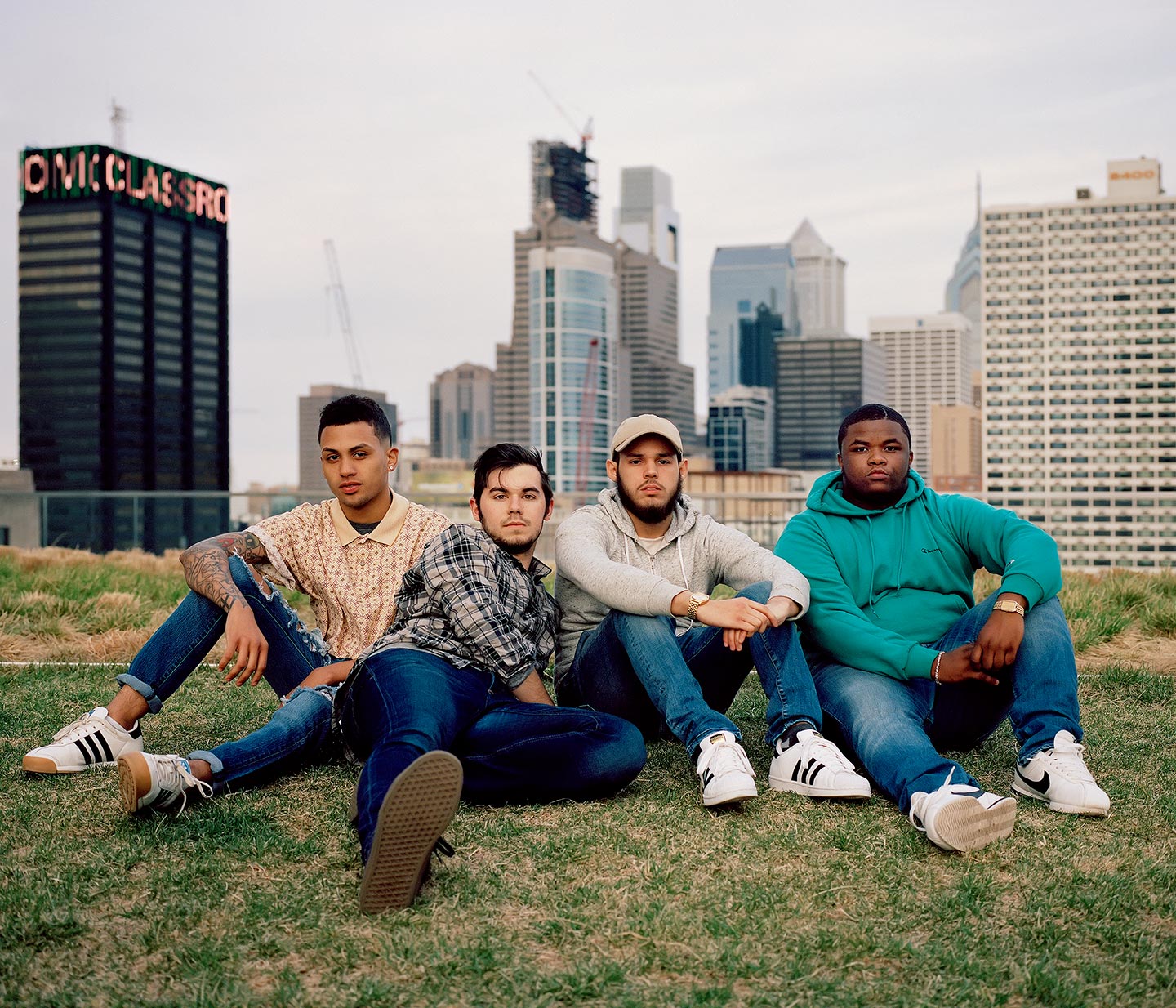 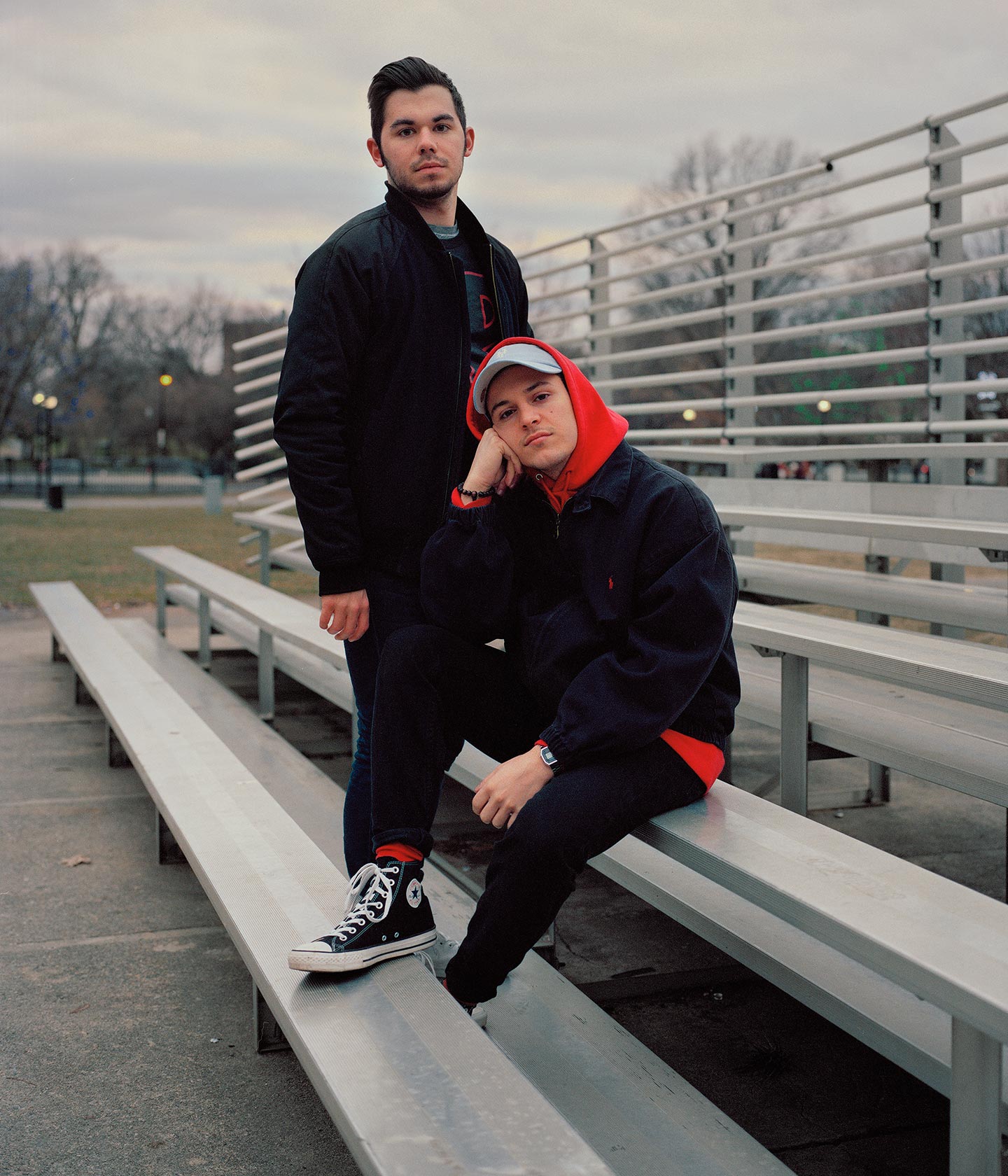 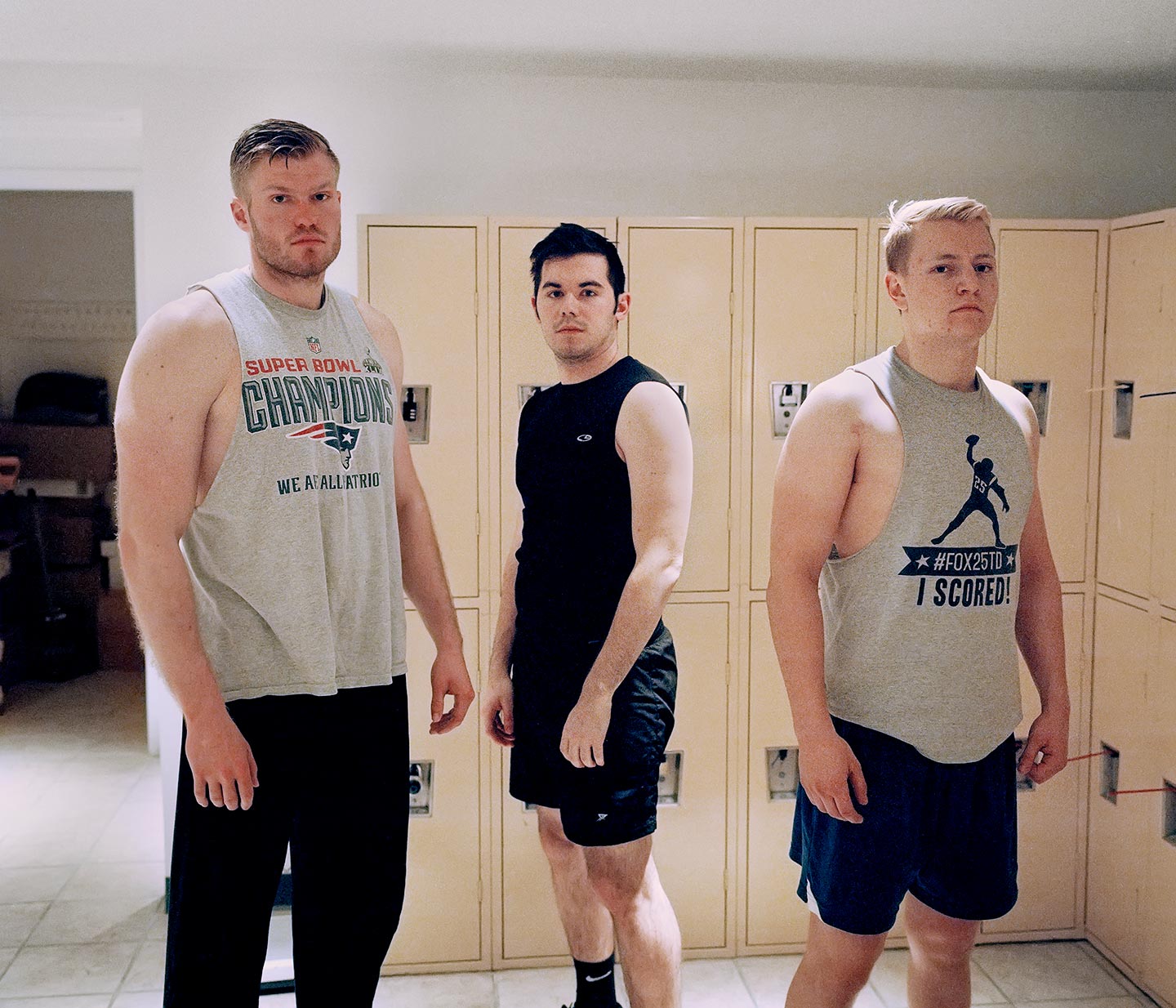 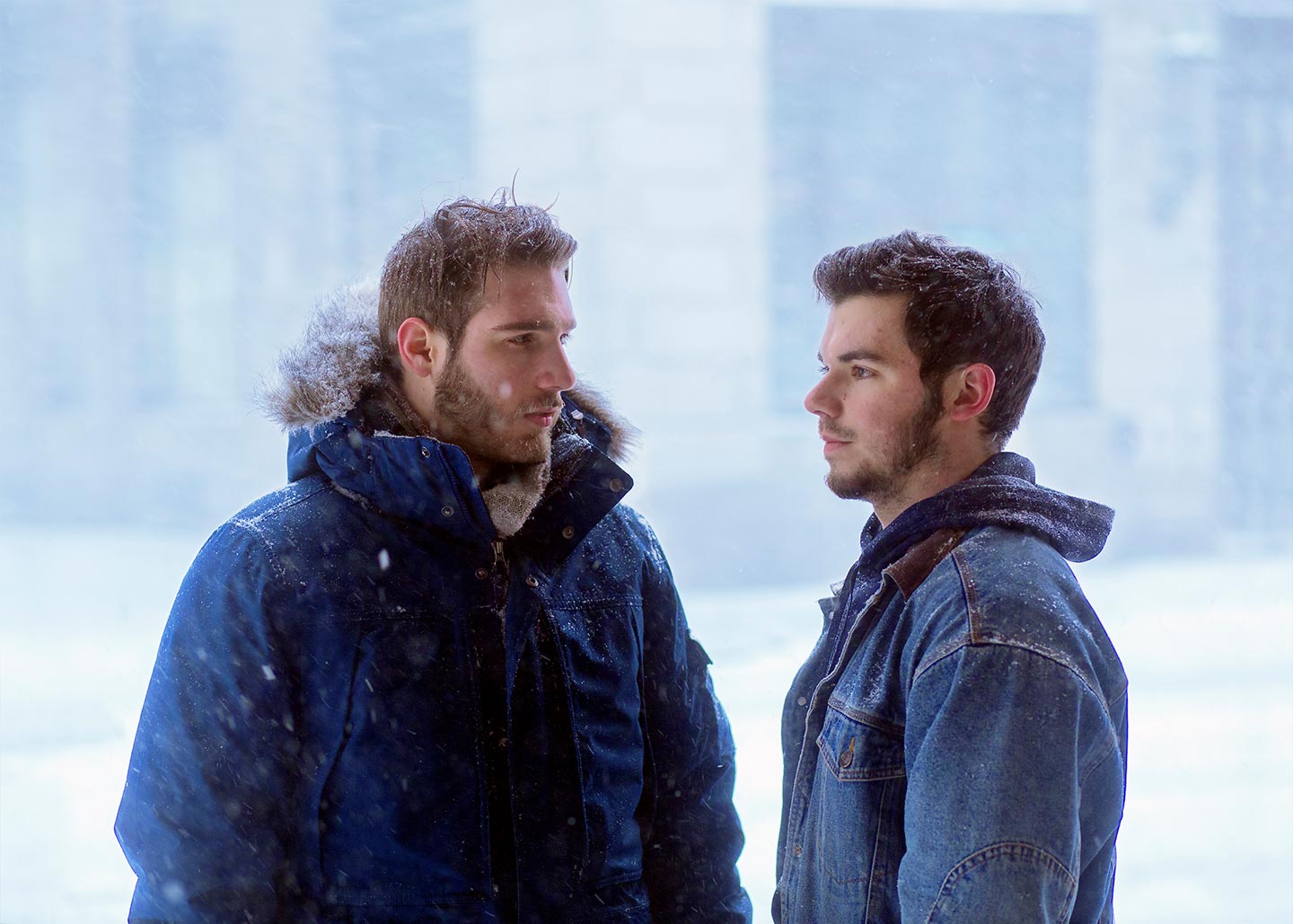 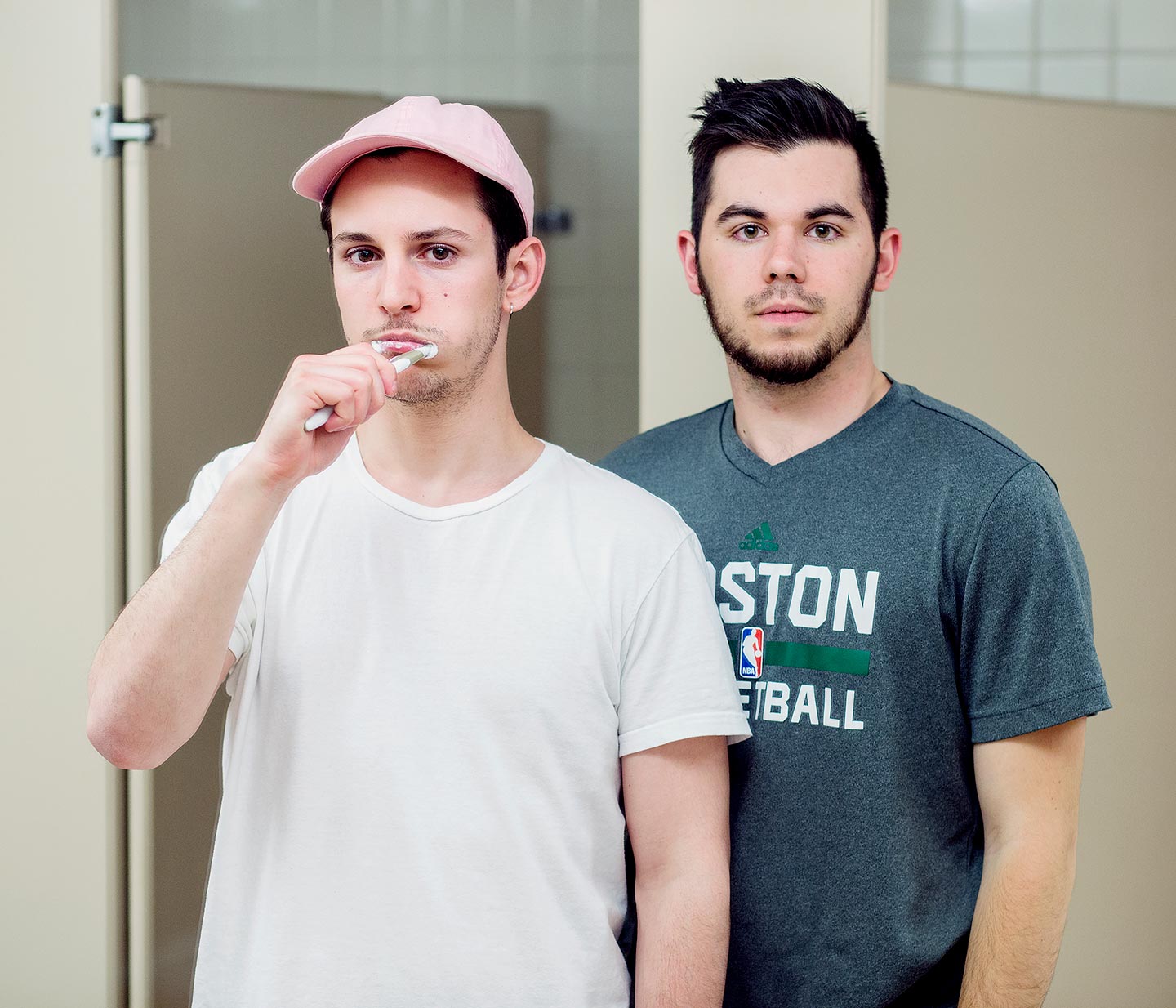 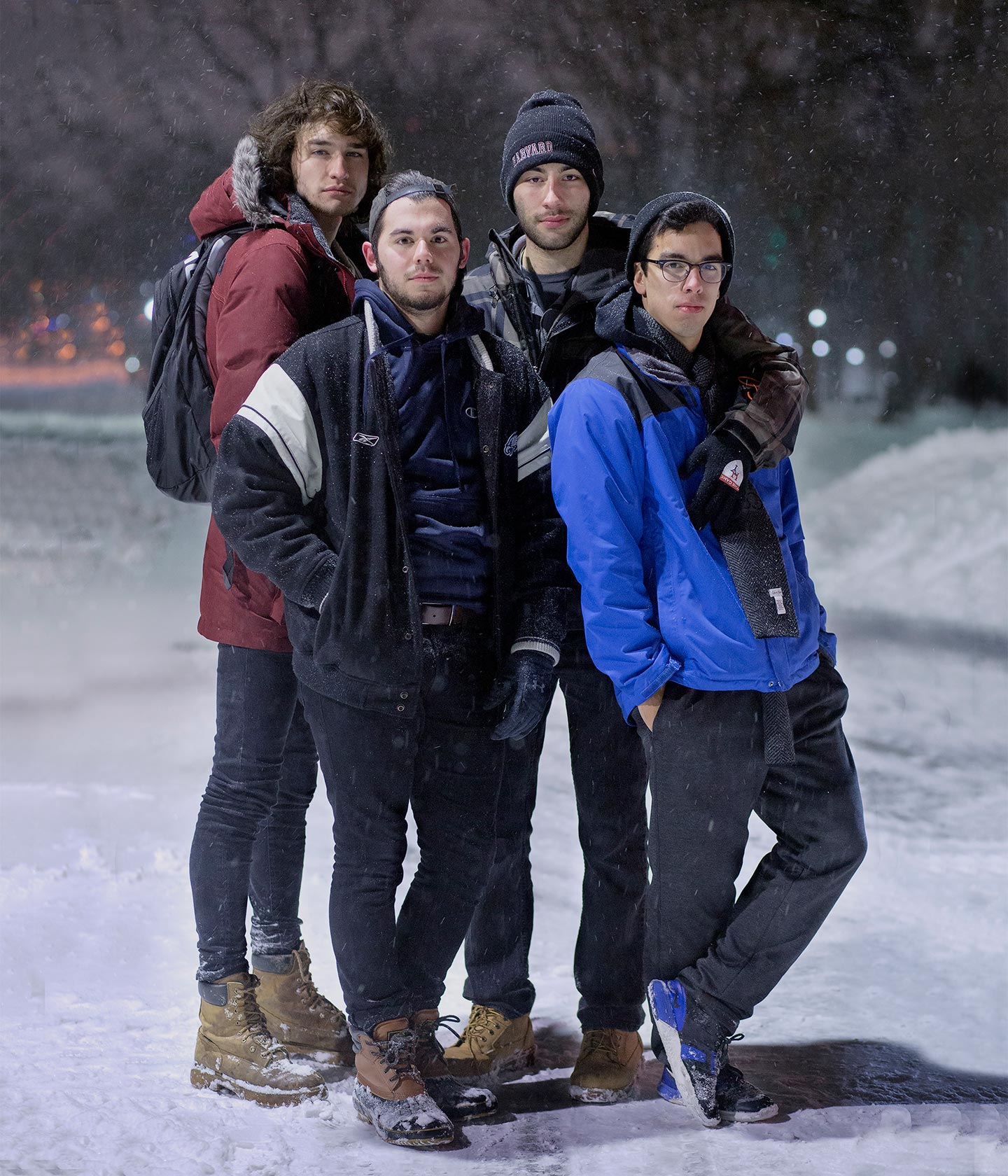 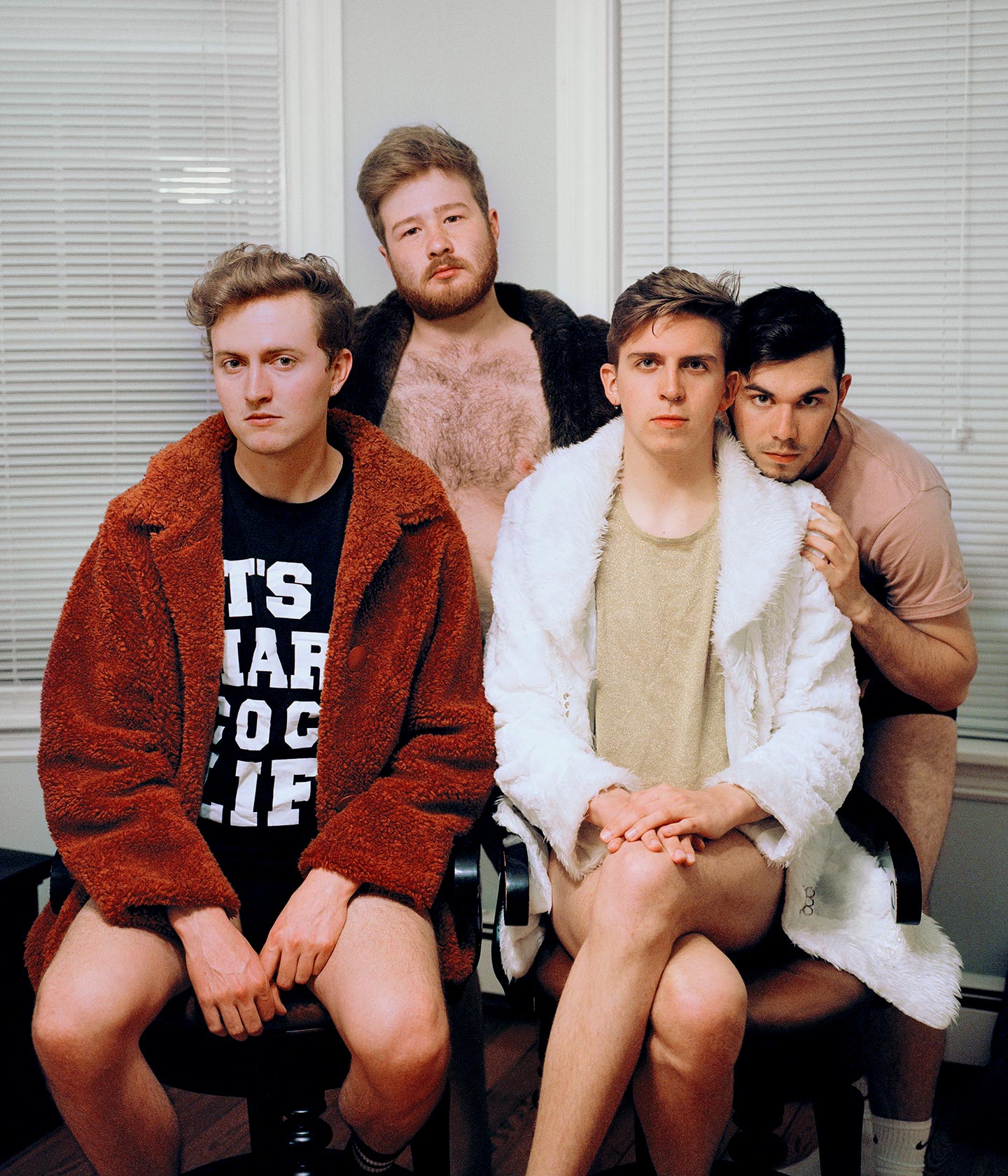 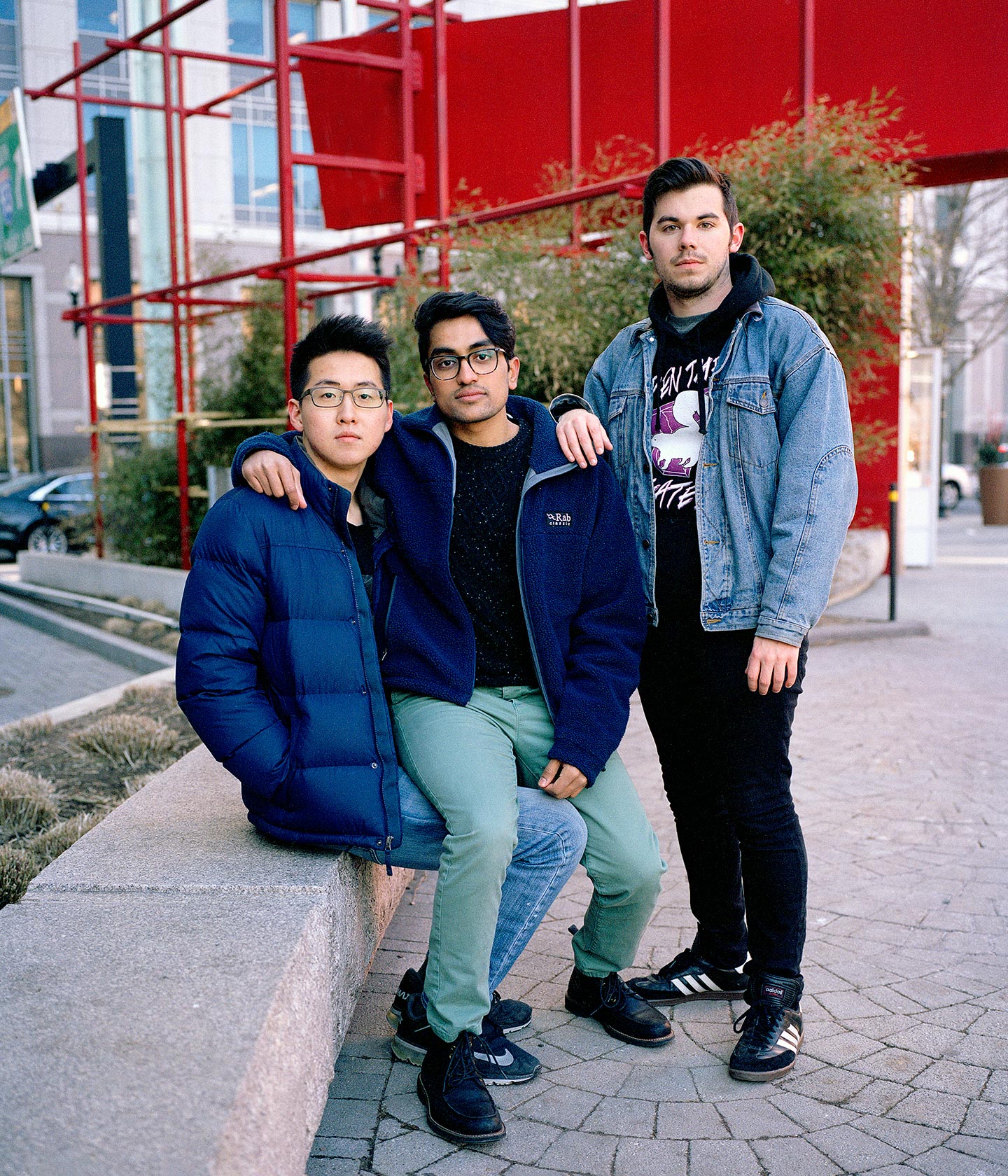 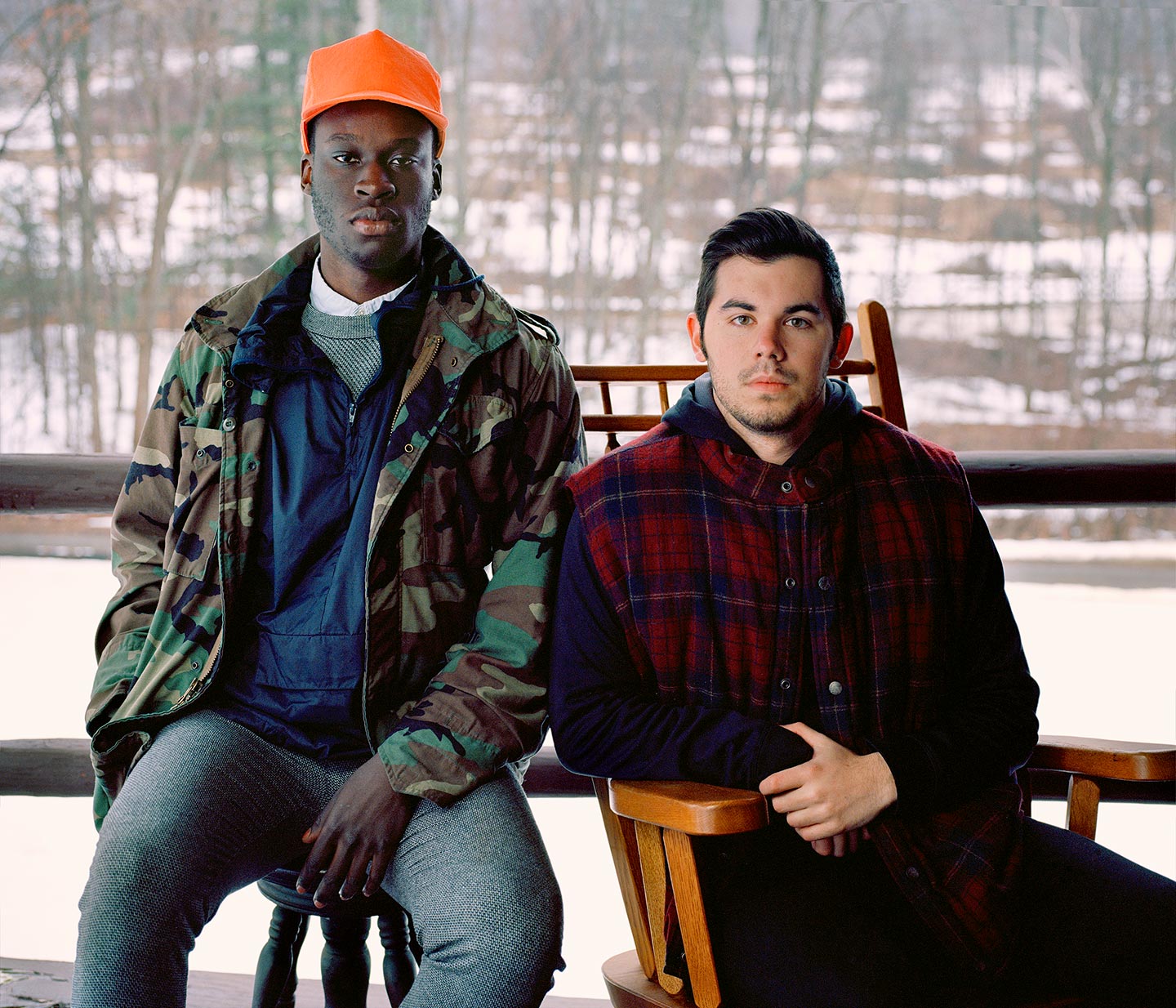 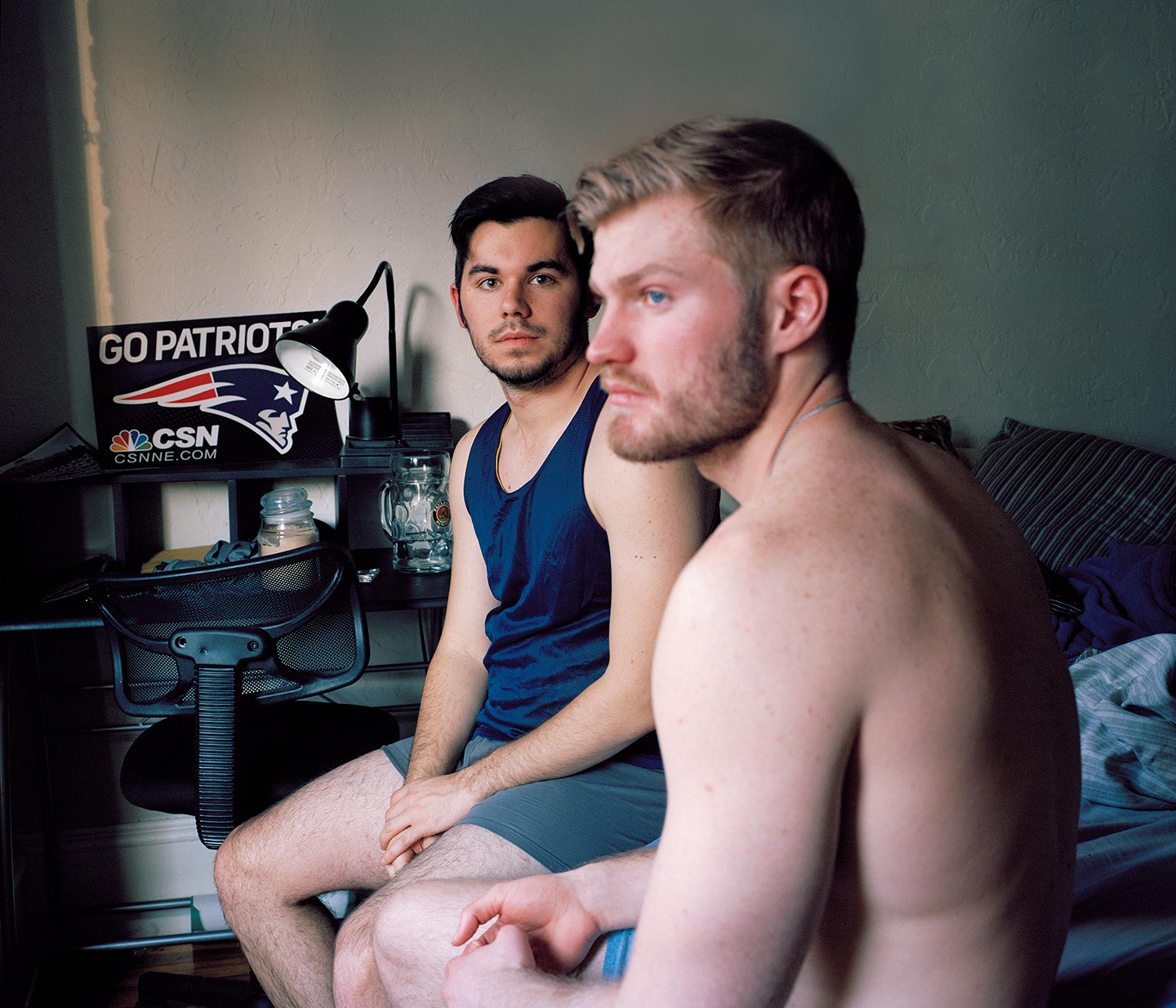 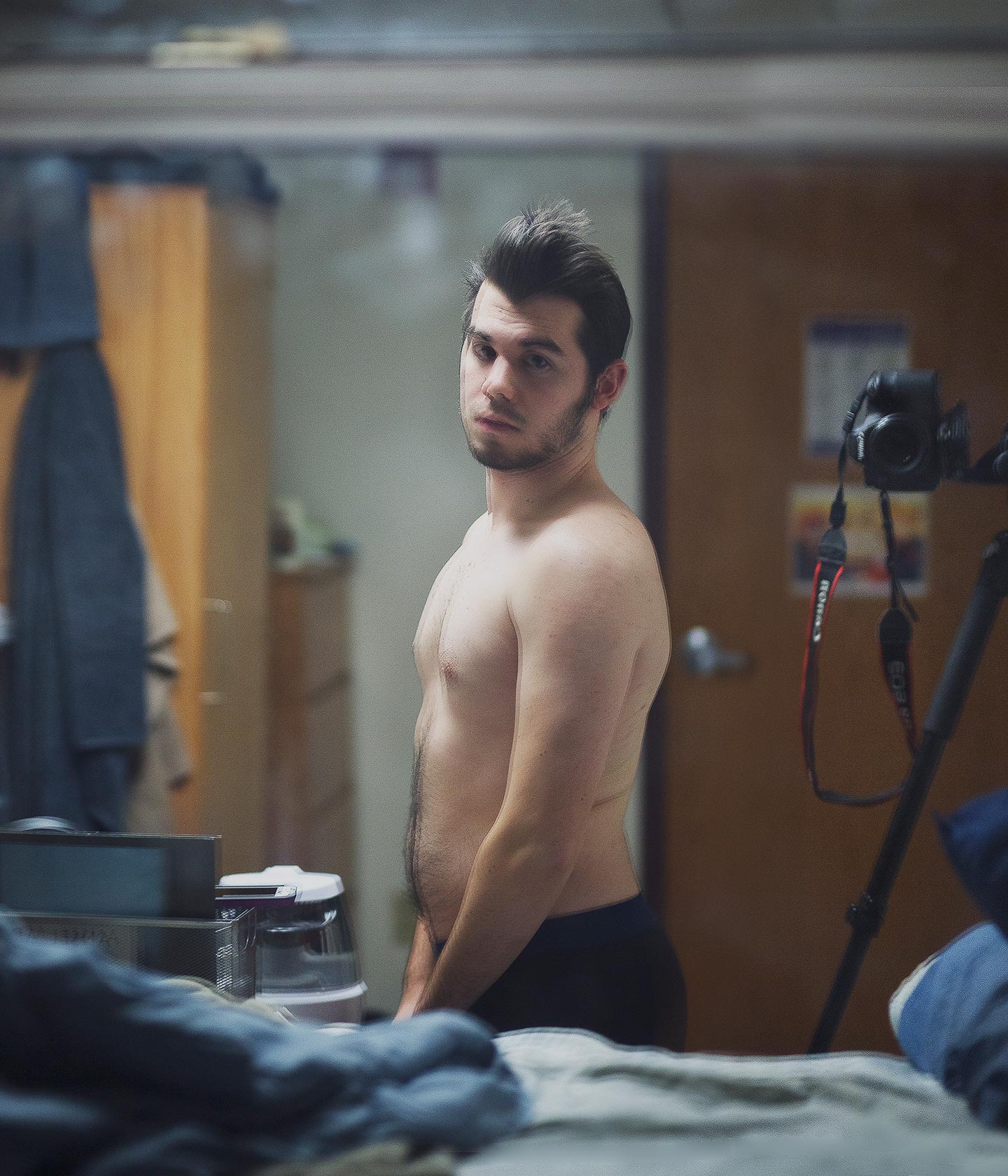 The Space Between Us by 23 year-old American photographer Evan Blaise Walsh is a series of self-portraits inspired by Evan’s experience growing up gay in an all-boys high school: “Since I started high school, I’d always been fascinated by the rites and rituals around boyhood as it relates to showing love between male friends—the friendly punches, the insults, sports, the performativity that contributes to being a man,” Evan recalls. “No moment seemed to pass without scrupulous examining from peers as we were all trying to be seen and not seen at the same time. It was wanting to be known as strong, yet trying to erase any signs of weakness or femininity, and wherever possible, putting someone else below us in order to emboss ourselves. Of course, for me it was side-comments and bullying and the daily violences that are (or, maybe now in some areas, were) inherent to young queer life. As a budding artist, these microaggressions gave me a unique vantage point. Back then I didn’t know yet that—from the margin—I could see what others could not. To exist, I’d become a spy of sorts: survival meant carving out a space for myself among football players and wrestlers and bullies and young men who feared to know themselves.”

Things changed for Evan in his last two years of high school, when he started photographing: “Those who hurled insults suddenly wanted me to take their picture, to see them. These men around me knew my camera could be used to make real the vision they dreamed of themselves. I could co-author the man they wanted to be, utter him into existence. Through all those years of discerning and confusion, I learned that having empathy meant I had become a repository for other men’s fears and dreams. I brought all this to the work that lead to The Space Between Us: the tapping into the fear of being truly seen; the power of empathy to cross our invisible walls; the ability to pass between queer and heteronormative spaces; the mapping of a new form of love and friendship. While making this work, I learned with the espionage of my youth as research, I could leverage my skill to create physical, tangible space for friendship and family without artificial boundaries. I started taking group portraits from this desire to document these unique friendships and all the complex, rarely-spoken-about (and discouraged) emotions that made them up. In general I wanted to make this work because I felt like the relationships I had cultivated and had witnessed didn’t match the ones that had been represented to me in mass media growing up. At 17, I saw football players holding hands as they walked onto the field; I saw men laying with their heads in each other’s laps; I saw tough men crying in one another’s arms, and I wondered where had all of that been in the land of my youth? I started to follow my instinct to show that many men have friendships like the ones I have.”

Here’s some insight into Evan’s process for creating the images of The Space Between Us. “Ahead of the shot as I assembled the subjects, the only requisites for casting were that I at some point had felt an intense closeness and complete openness with the people in the shot and, if it was more than me and one other person in the shot, that they were also close with one another. Whether that was a brand-new friendship or a seven-year-long one, the comfort couldn’t be invented or projected. For locations, we would usually go to a space that shared some resonance either to our friendship (bedrooms, the dorm bathroom we shared, the Boston Common, the Philly skyline, our locker room) or places of ambiguity (in the smoke of a storm vent, a gray amphitheatre). In the public spaces, often we were being watched as we made the portrait, and even one time a man came up to the windowpane in front of us and started to hump the glass (in that moment, I remember feeling full of pride to be making these images). Considering those public, hypervisible portraits, in my edit I tried to choose portraits that communicated a degree of hesitance or awkwardness. In private spaces, generally, I edited for ones of openness, comfort, and confidence. Looking across the project, I don’t think the series should communicate just fearlessness or just hesitance; with my edit, I tried to consider what grey space we occupy when being seen by the camera and by the world, and how my role as editor played with those notions.”

A love of deadpan portraiture had a strong impact on Evan’s way of shooting for this project—specifically the work of Richard Renaldi, Joel Sternfeld, Rinneke Dikstra, Alec Soth, and August Sander. “Having the subject with a stoic face, center of frame, all looking into the camera: it’s a formula that invites the viewer to think about the decoration and environment around the subject,” Evan remarks. “With the staging of group portraits, I had a few inspirations: Renaldi’s Touching Strangers series; Mamie Heldman’s Together, Us; Tina Barney’s iconic portraits of her east coast upper echelon family; Jen Davis’s intimate self-portraits across her different series. Leaning off this inspiration, I asked myself what my voice with group portraits could be: I loved the process of focusing the shot, setting the self-timer, and then joining in with the rest of my friends. Because there was no one behind that camera, a unique intimacy resonated during the moment of the photograph. When I stood in the shot with my friends, we all performed together when the shutter clicked.”

Working on The Space Between Us helped Evan realize things that he hopes viewers as well can glean from his images: “In shooting these portraits I had to face a lot of walls that I’d always written off as fully external. I blamed teachers and mentors and society at large for giving me this idea that I couldn’t be close to men. But in moments of being told I wasn’t permitted to be something or being made to feel that I wasn’t good enough, I also built these walls myself as I internalized these values. We enforce rules back on ourselves so much that even in spaces of absolute freedom or empowerment, we can still feel small or scared. When I leaned into a friend’s shoulder, or asked a friend to take off their shirt, or if they would lay next to me in bed, I assumed they’d be hesitant. And yet in the private and domestic spaces, with each click of the shutter fear and hesitance felt absent. When I made these portraits, I realized that for so many years I’d been afraid of closeness with male friends because I’d let the judgemental landscape of my youth toxify my ability to be fully vulnerable. In this way, I want every person—regardless of their gender—to feel pulled to be more open and fearless to be vulnerable, and to search for the inherent connectivity humans have beneath all our rites and rules and rituals. I want viewers to question the boundaries they’ve forced on themselves. To ask themselves if they have any fear that’s holding them back from more closeness.”

Evan’s interests as a photographer are “myths of gender, masculinity, and chosen family. As both a writer and photographer, I focus on the real and imagined landscapes of manhood that we either choose or refuse to use as maps for ourselves.” For his main influences, this is what he has to list: “A world that uses silence to disenfranchise. A country with so many hierarchies that paralyze. The 3.5 times more men than women who commit suicide each year in America. Frat boys who drink each other to death because in these tight bounds of expectation and repression they’re looking for any way to feel a part of a family. The lonely, toxic individualism and obsession with power within so many men. Gay rumors, bullies, and threats. Men who fear vulnerability. Men who hurt others for fear of being their true selves. The way my gay best friend looks at me when I hold something back, and the way we dance when we walk into the club and pretend we know how to belong. The way he can wear makeup and I can wear a hunting hat and my straight best friend can cry more than I do. My buff football player best friend telling me he’s really just a big nerd and the shock I felt when I realized I had idolized him so much I couldn’t see it was true. My straight best friend who wears face masks and kills turkeys every November beneath the cloudy Pocono sky and closes his eyes in reverence to thank the world, and yet to ask for forgiveness. The knowledge that our friends are really just reflections of the selves we want to be. Careless summers in jeeps and tents with friends who will betray one another later for fear of being seen. All the women whose love and strength hold up men who don’t deserve it, who try to dismantle this toxic patriarchal system every day. This system created by powerful men that holds men back from living. Men who aren’t afraid to admit they’re scared or sad or lonely. Men who build one another up. Men who say I love you with the same freshness every time.”