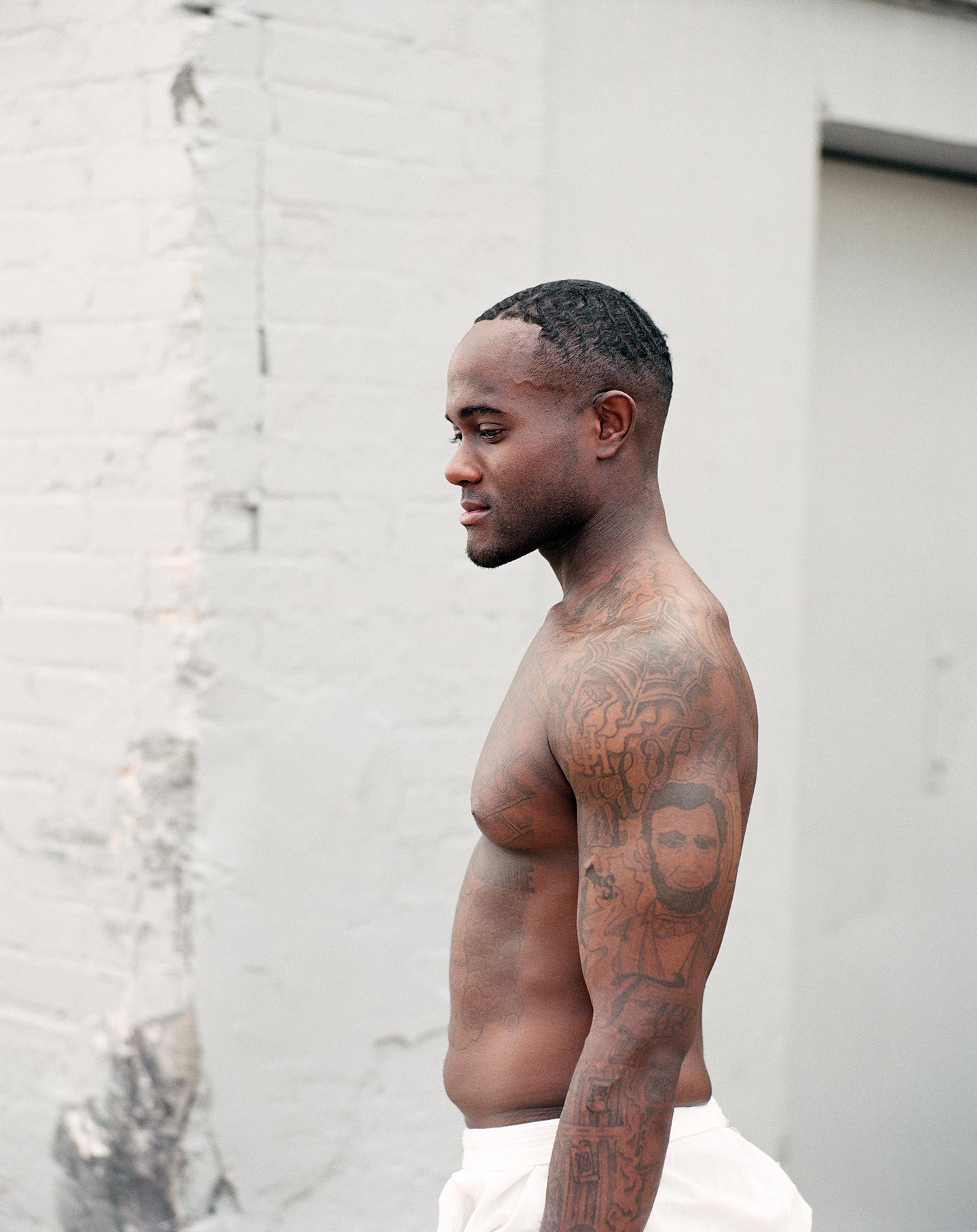 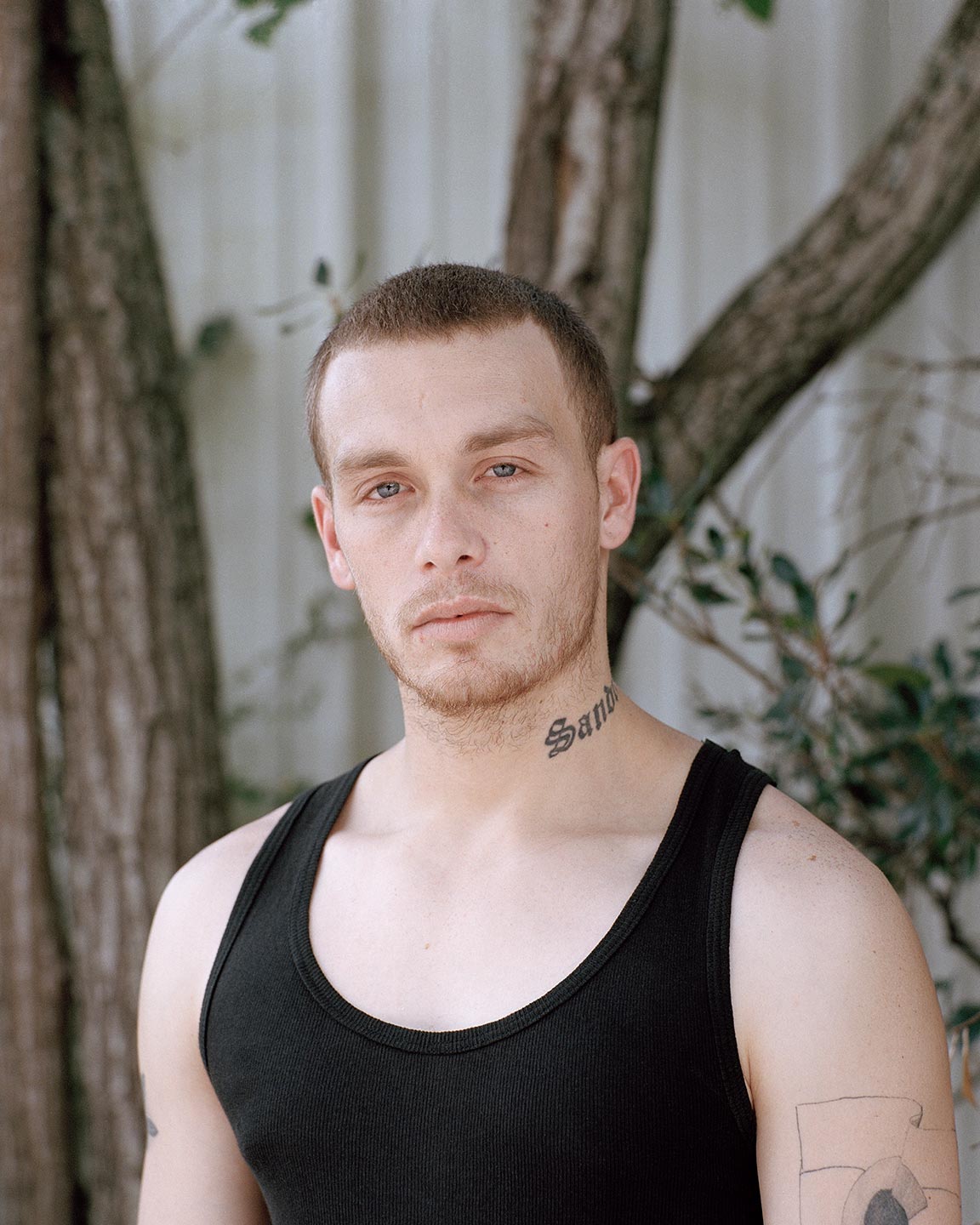 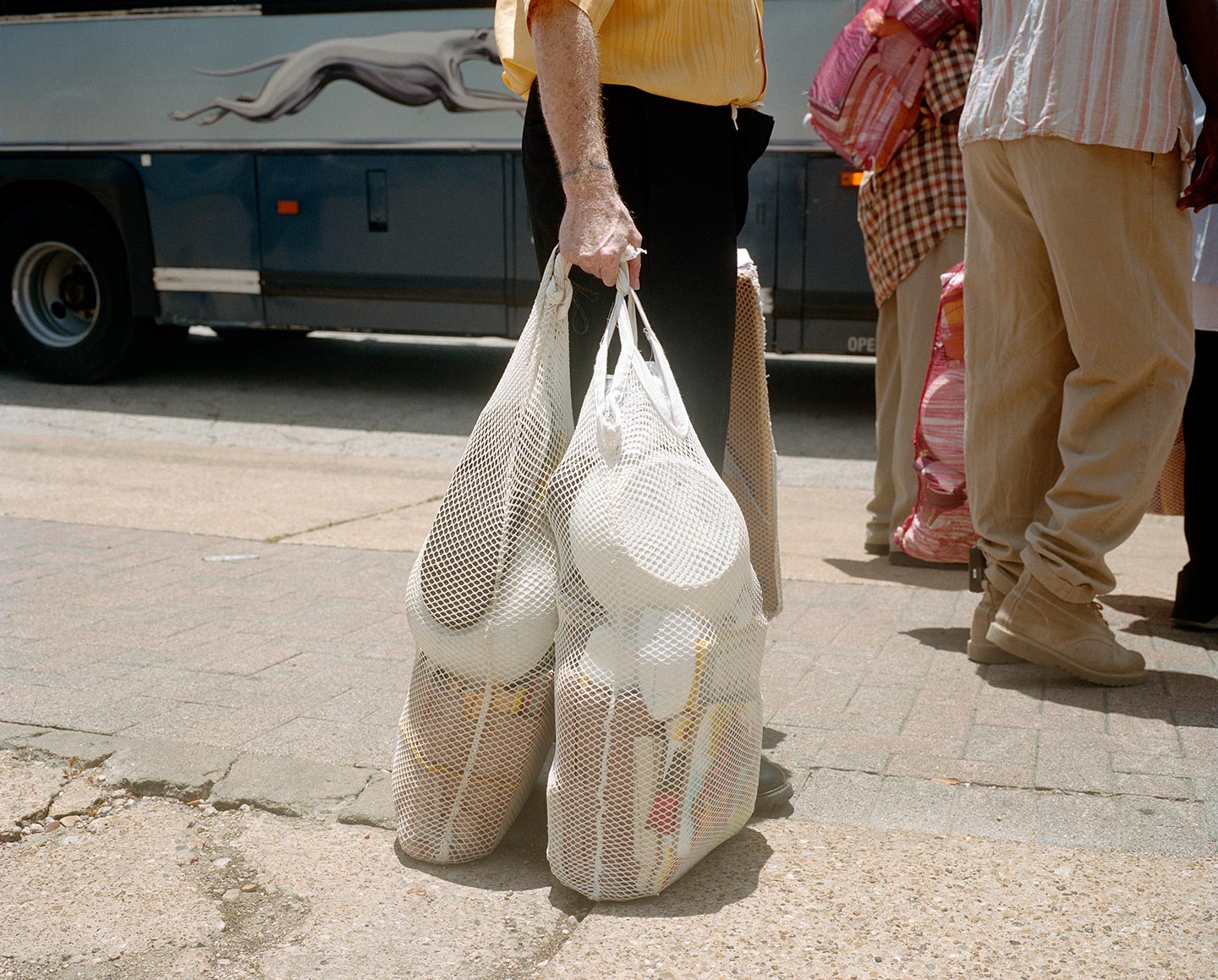 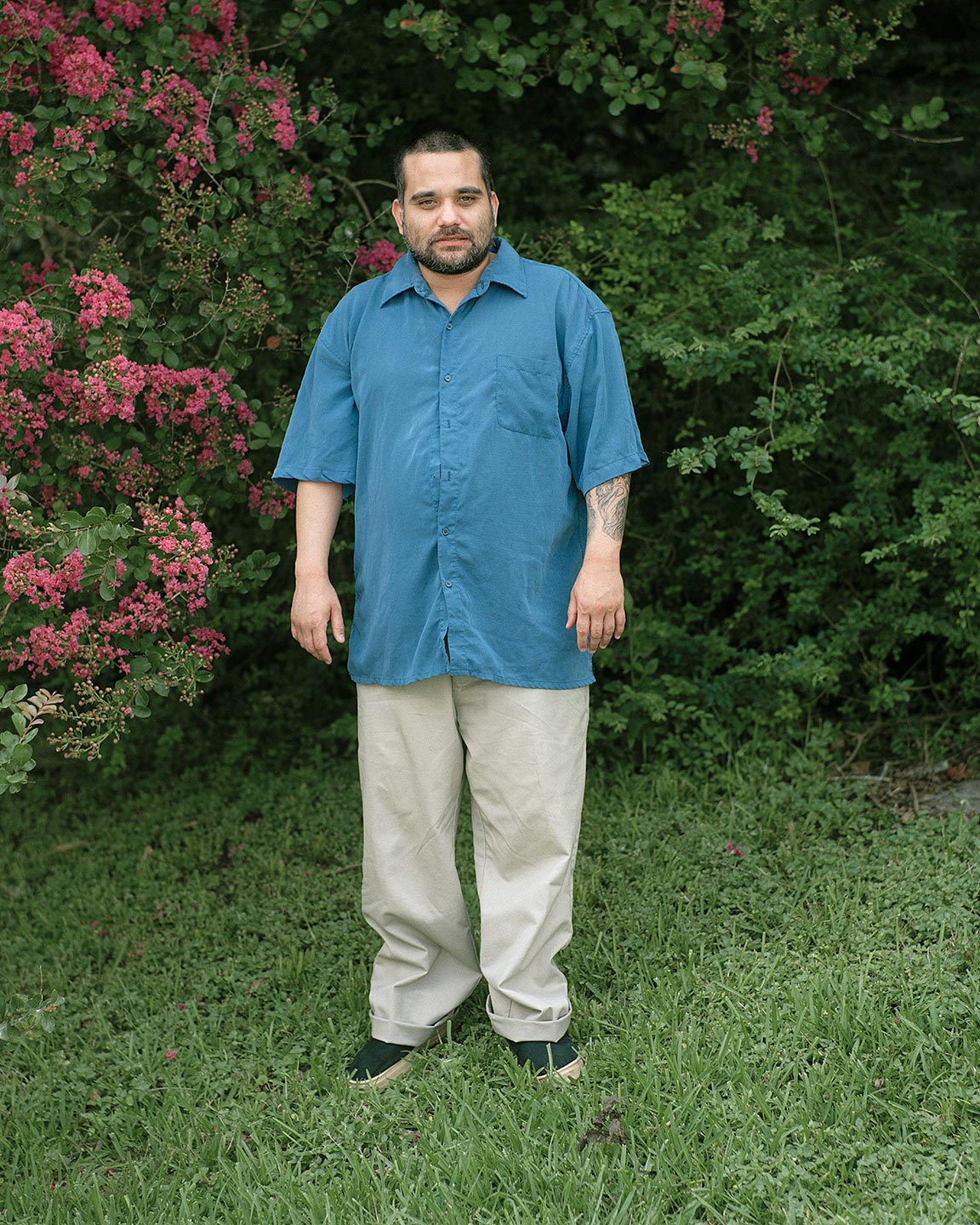 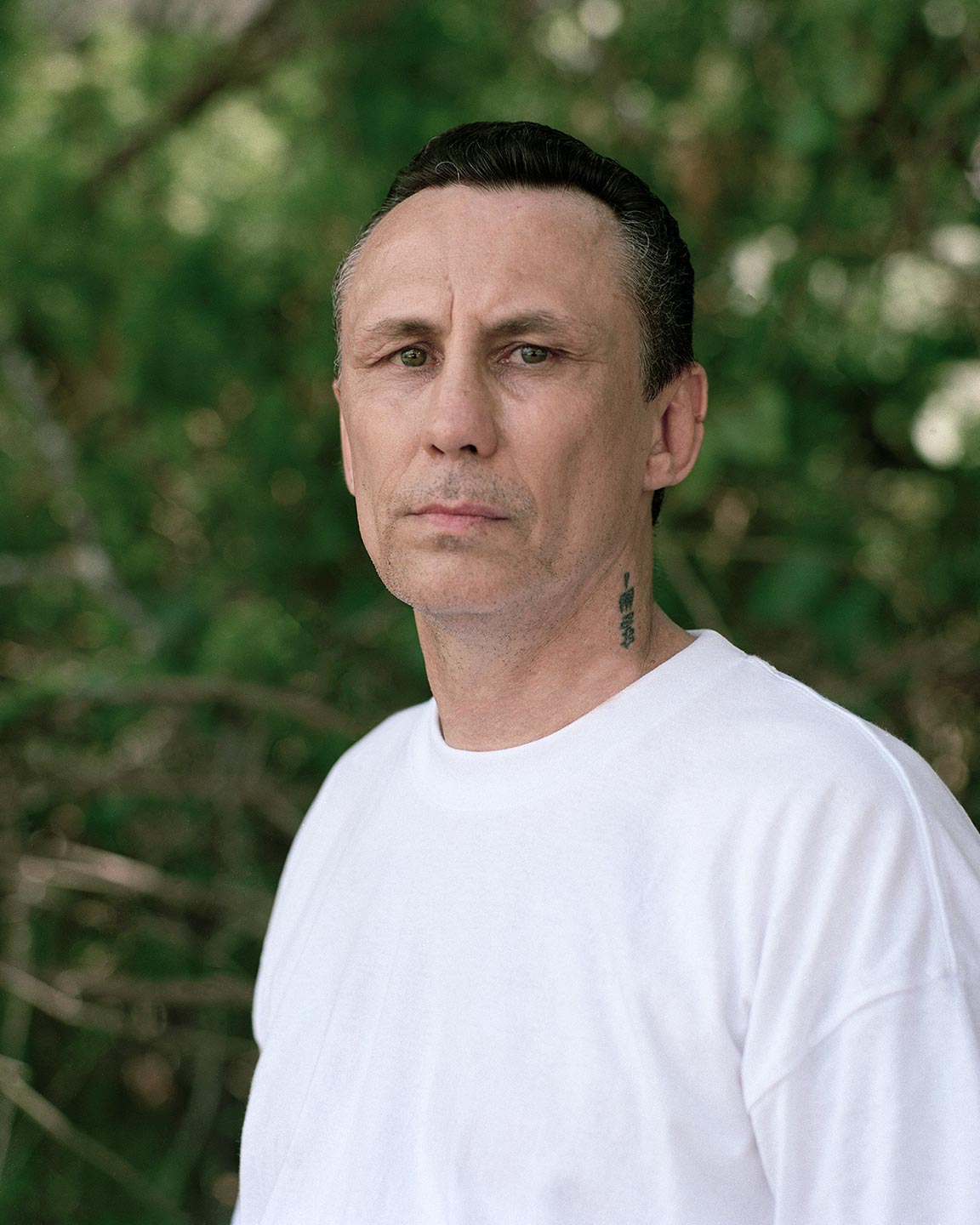 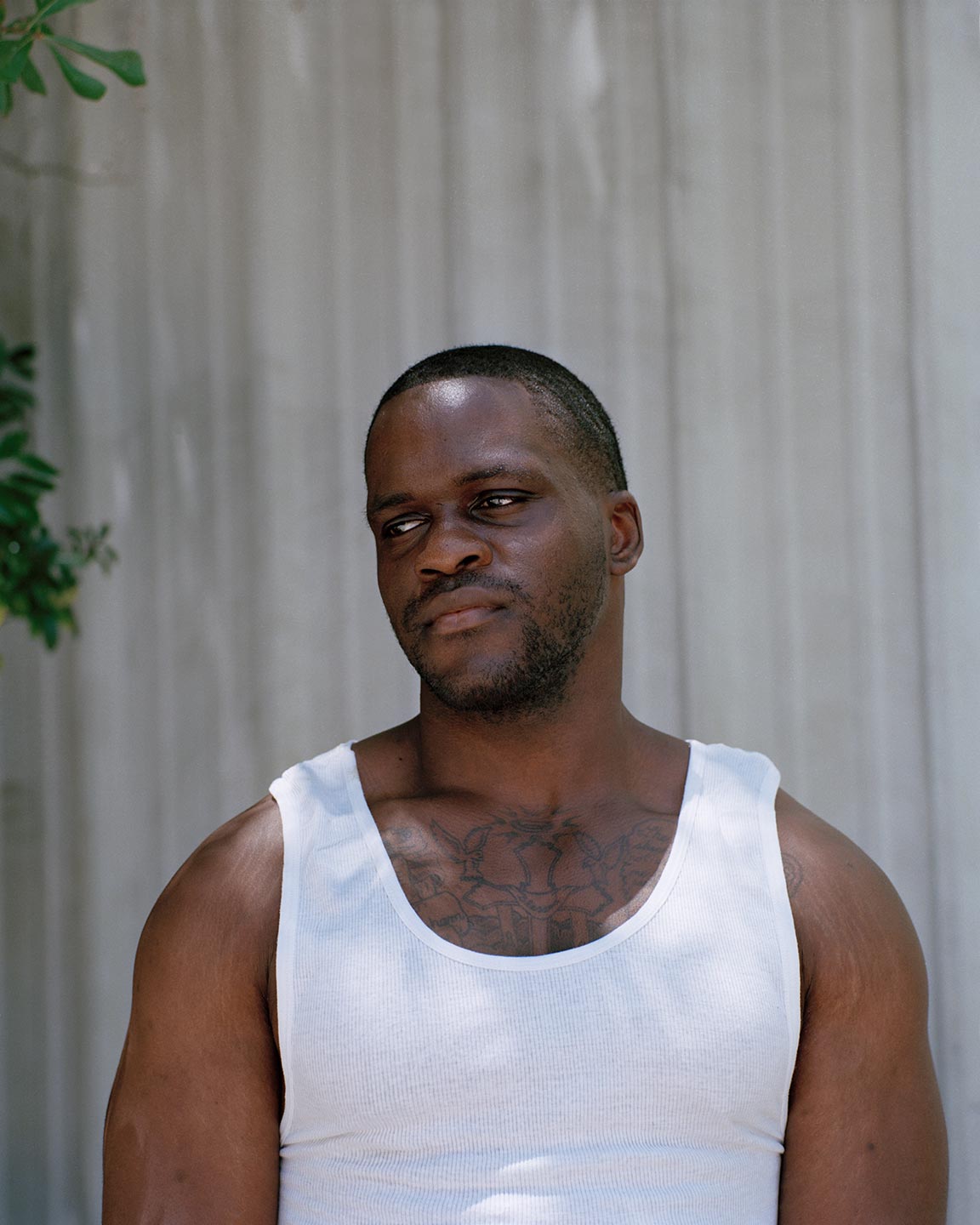 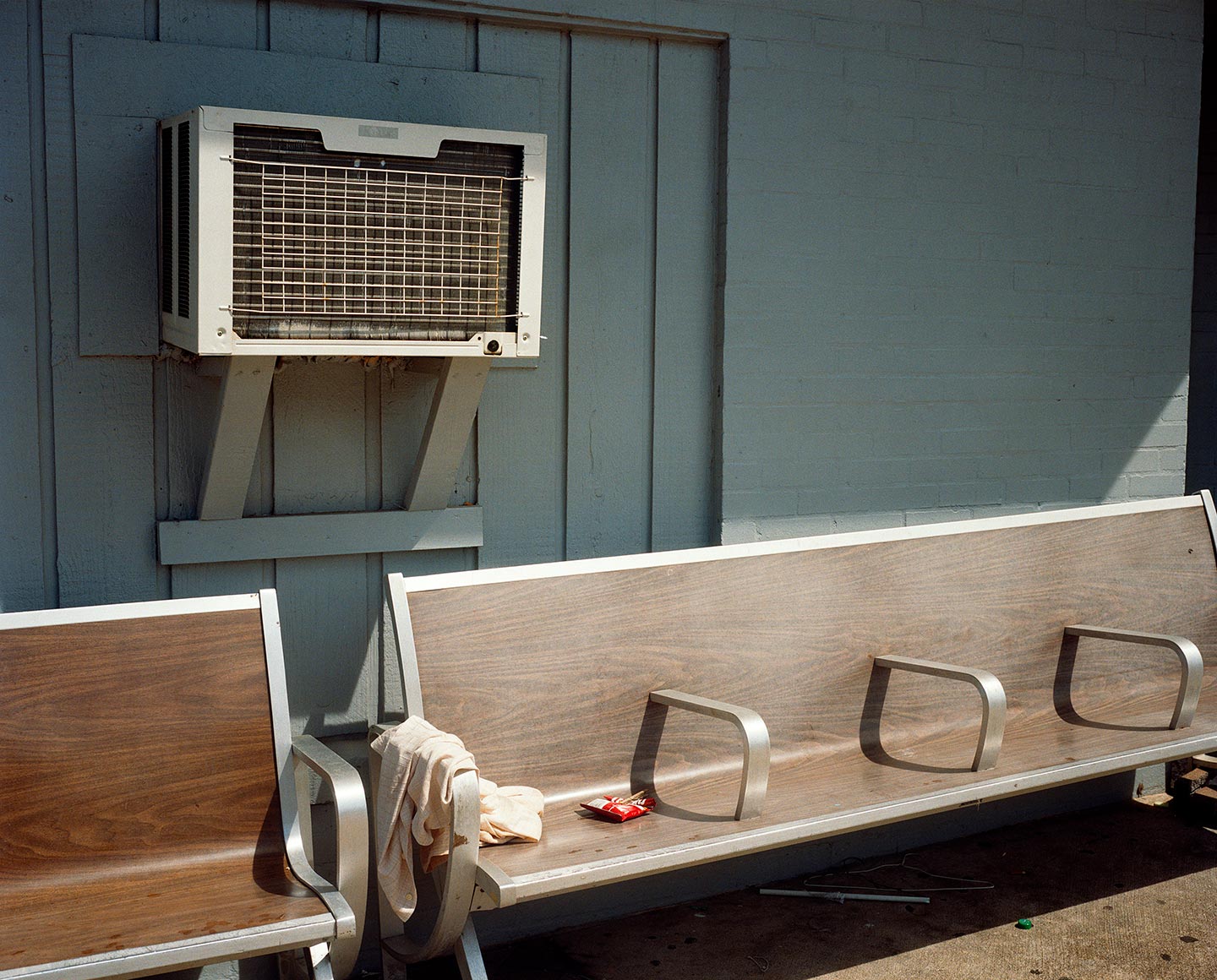 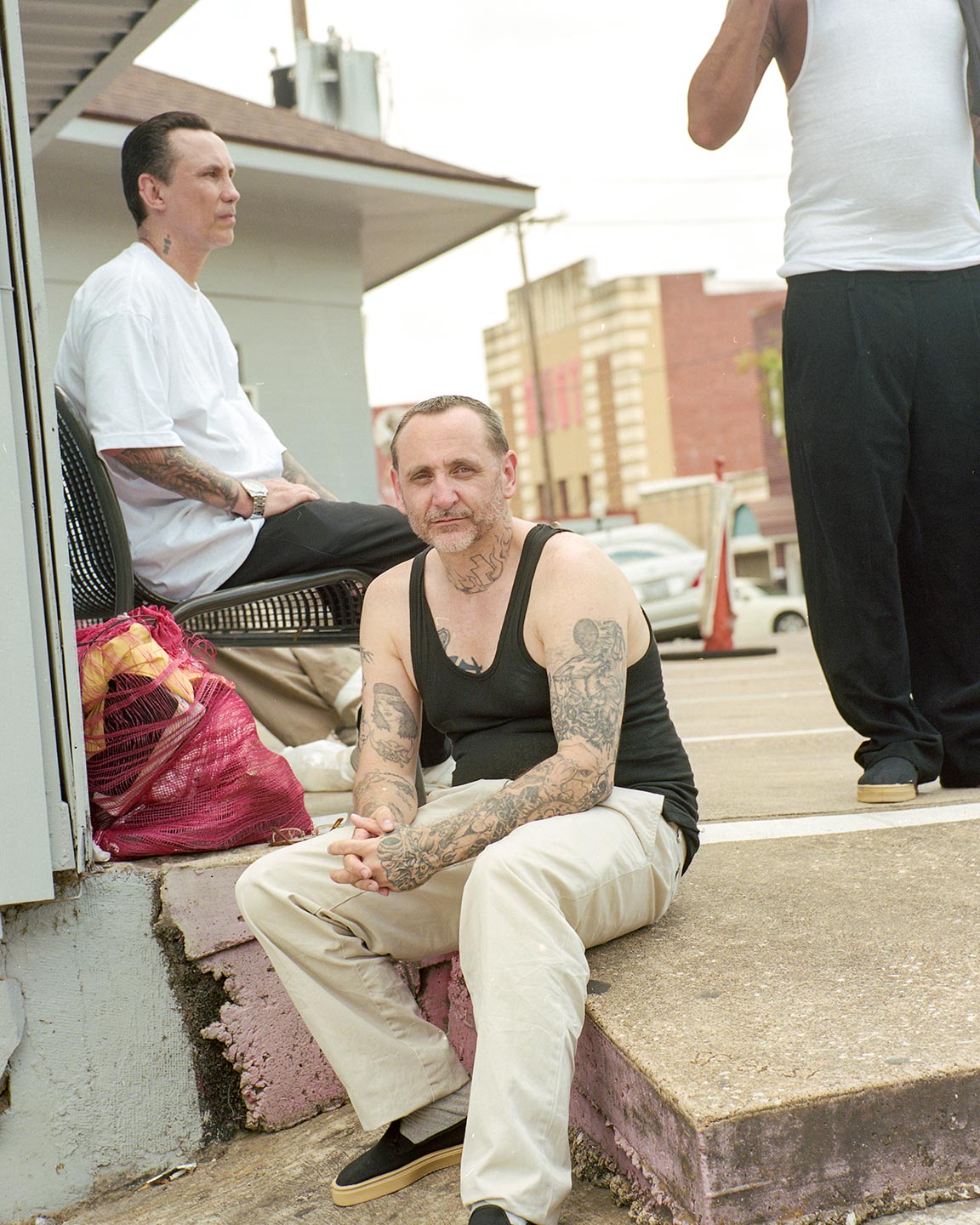 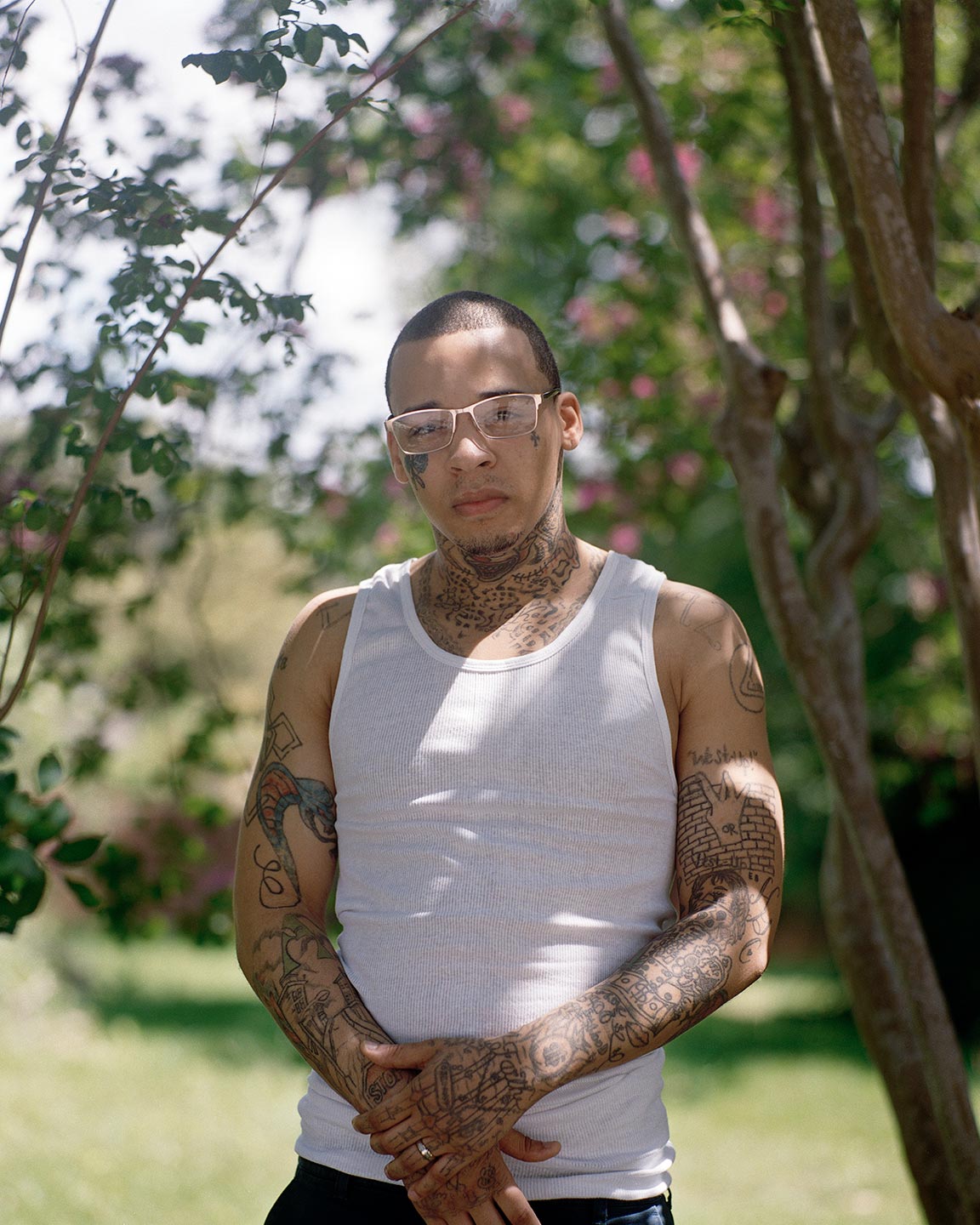 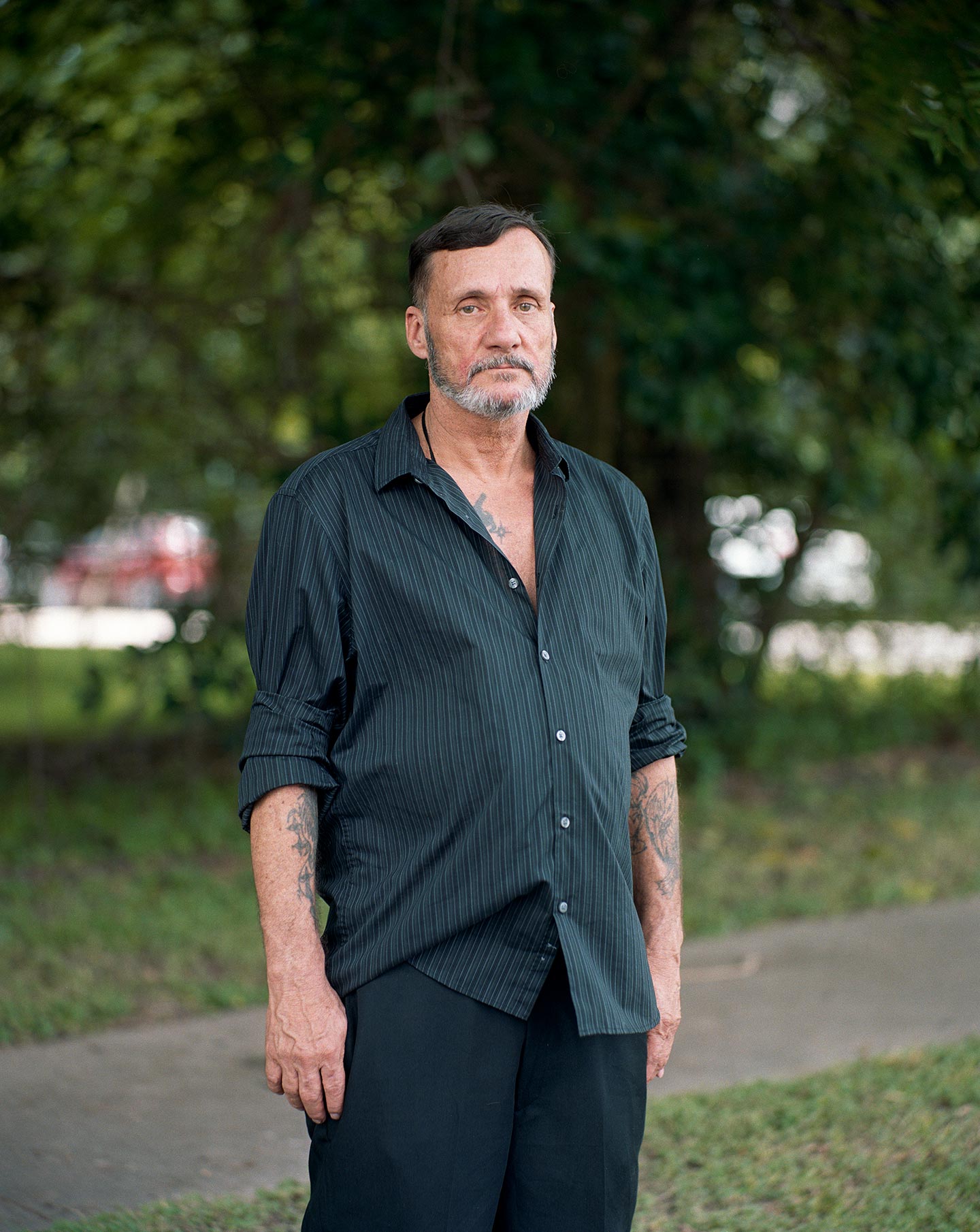 The Bus Stop by 30 year old American photographer Emily Kinni is a series of portraits shot at the Greyhound bus station in Huntsville, Texas. “Huntsville is a prison town with 11 different prison units of varying degrees of security, making the prison industry one of the two most prominent in the town,” Emily explains. “The biggest unit is known as the Walls unit and also serves as a regional release center for the state, meaning men are bussed in from other facilities to be released through this unit specifically. On average, there are 100 to 150 releases a day Monday through Friday. If the individual doesn’t have someone picking them up, they walk a couple blocks away to the designated bus station and wait for their bus out of town. The Greyhound station has two busses a day, so depending on the time of release, some of these men have to wait a couple of hours. I have been going to this bus stop to photograph the former inmates while they wait for the next phase of their lives to begin.”

“Upon release, the men are given a $50 check which can be cashed at the Greyhound station. They are also given church donated clothes, and an onion bag to carry their belongings in. What I came to question was how this liminal time of transition might have an effect on one’s concept of freedom, identity, or sense of self. These men are not yet where they are going, but are no longer incarcerated. They are no longer in prison uniform, but are not yet in their own clothes. It was due to these numerous liminal factors that I felt it necessary to invite the subjects to play a part in how they are seen. I wanted to ensure there was agency for the subjects in terms of how they were seeing themselves for the first time upon release, but also in how the viewer would see them. Each subject and I decided where they were photographed and they took charge in how they positioned themselves.”

The idea for the Bus Stop came about from Emily’s frequent visits to Huntsville, where she has some relatives. “One undeniable signature of the town is the prominence of prison culture throughout Huntsville and how that shapes the social and economic structure of the town. I have been integrating bits and pieces of Huntsville into my work throughout the years, sometimes focusing on aspects of the prison, sometimes leaving that part out; but I have wanted to spend more time delving into Huntsville as a place, as well as seeing if it could be an entry point into further exploring the complexities of mass incarceration. I had seen and heard about the bus stop from a young age and began considering the larger meaning and potential impact of waiting for the bus ride out of Huntsville. I wanted to see if making work at the bus stop could begin to address some of that in a productive way, if I could scratch the surface of this topic morally, ethically, and respectfully; and if so, go from there. ”

In making the portraits of this series, Emily wanted to “focus on my subjects’ mental/emotional state, the clothes that they were wearing (which were often church donated clothes), and the items they were taking with them. Since I was focusing on this liminal moment between their release and boarding a bus to their next destination, I knew I wanted the photograph to read as somewhat ambiguous or hint to this transitional time. They are no longer incarcerated, but are not yet entirely free either. The future might not be so clear as to where they are heading. I wanted to ensure that most of the individual portraits were shot away from the station and away from any semblance of the prison exterior to represent their current, in-between state. I really enjoy how the images hint at something, though without the specific context you may not know where these men are or why. I think the series offers an opportunity to ask questions about who these people are in relation to their surroundings and allows the viewer to notice the small details depicted in their portraits, which I read as clues to facets of their story. The information we are given and not given equally addresses the uncertainty of these photographs, but also the uncertainty of their future.”

“This is a tough question,” Emily remarks when asked how she hopes viewers will react to her photographs. “It is hard for me to realize a particular reaction or set of reactions that I would like the viewer to have. I try not to focus on this to be honest. I consider it, but I try and remain divorced from hopes of particular kinds of reactions or outcomes. More than anything I just hope that the work generates a dialog around the complexities of mass incarceration in America. The rates of recidivism throughout the country and in the state of Texas play a big role in this epidemic, and certainly informs my interest in this body of work. Since the project alludes to a point of departure for men formerly incarcerated, the possibility of return is an inescapable thought for some, especially if this is not their first time exiting the prison system.”

As a photographer, Emily is interested in “work that bridges fine art and documentary. I often question whether my work is documentary-based but with a fine art approach. I use photography as a platform to ask questions in order to see what answers, if any, come through by way of a photographic series. I never know where a body of work is going to go. Sometimes I investigate a subject and find that I end up focusing on something far different than the initial interest, and the work becomes a gateway to something else. Other times the original interest stays the same but webs into something much larger than I had anticipated. I tend to focus on aspects of the U.S. prison system, as I have been lately. When looking to other arenas of interest I care a lot about interiors with psychological charge, mysticism, human connection, as well as facets of human suffering. I look for opportunities to bridge these themes when possible.”

Cinema is a major influence on Emily’s photography, both visually and conceptually. “I have archives of film stills I have taken while watching movies, and refer back to them a lot when considering my own image-making. I used to try and figure out how I would take the shot and what equipment I would need. I have also been influenced by the students (past and present) and faculty from the Hartford Art School MFA photo program. There are such brilliant thinkers and creators coming out of that program and they have influenced me hugely.” Some of her favorite contemporary photographers are Sam Contis, Dana Lixenberg, Dru Donovan, Collier Schorr, Curran Hatleberg and Alessandra Sanguinetti. The last photobooks she bought were Women Are Beautiful by Garry Winogrand (“I found a copy in a used book shop“) and Eden by Robert Adams.