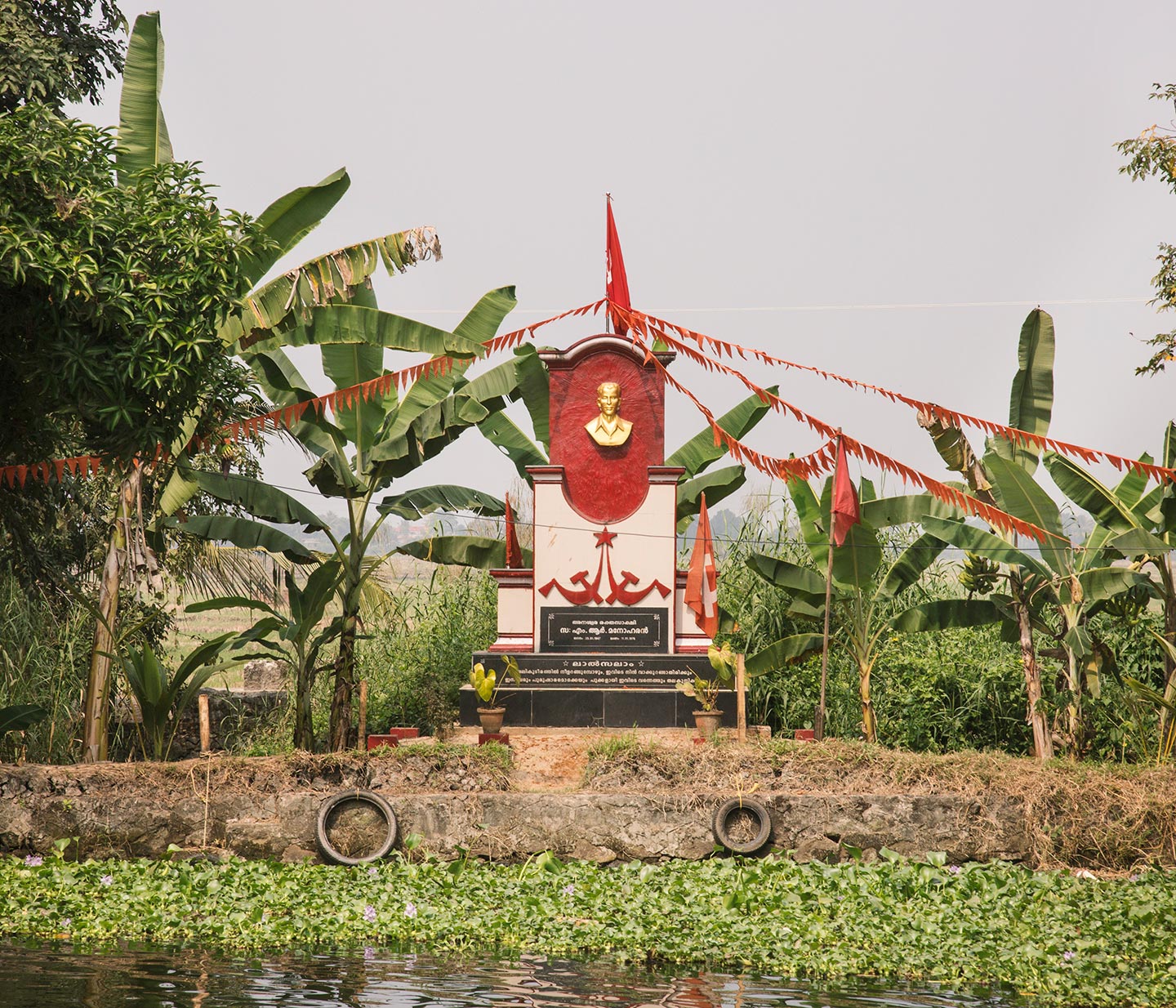 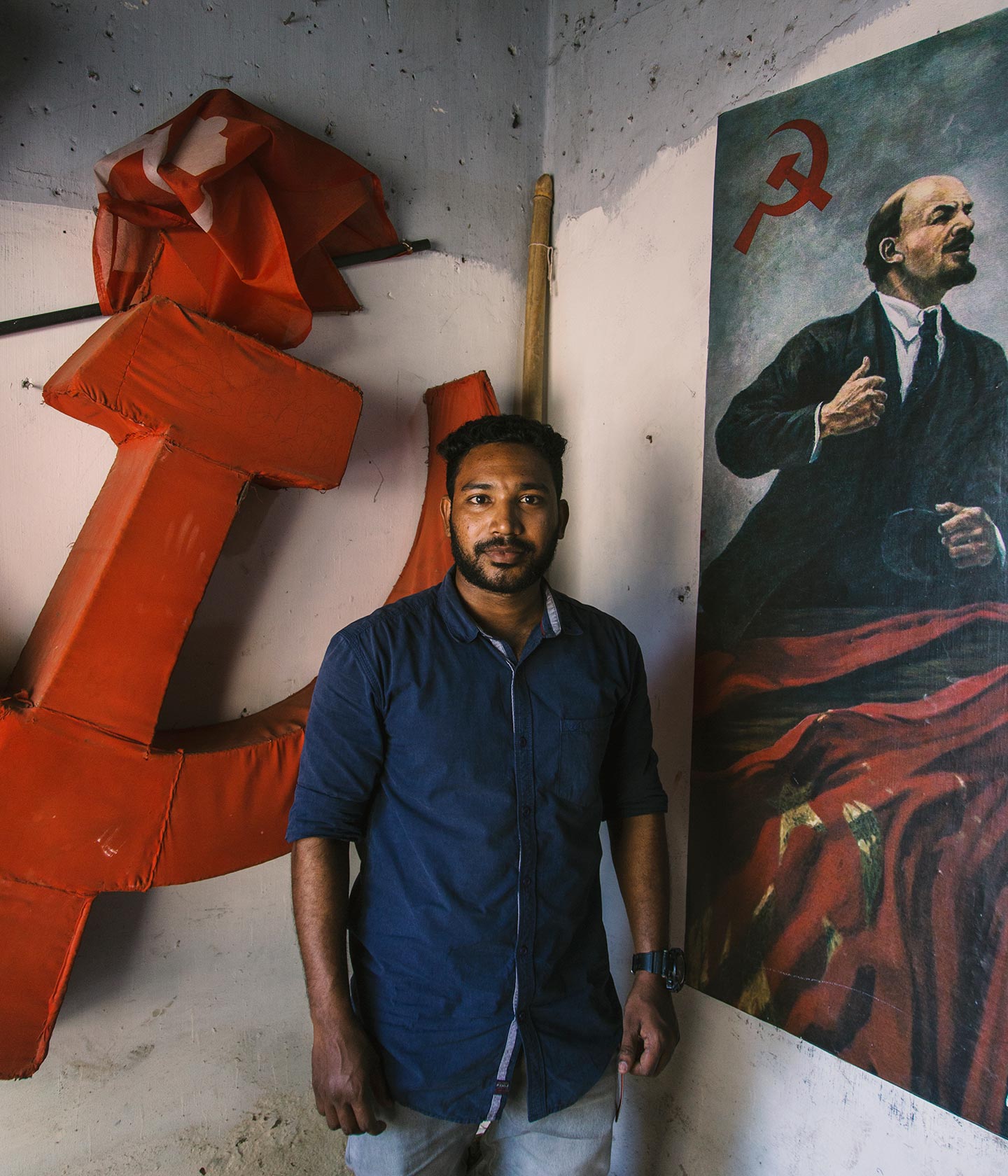 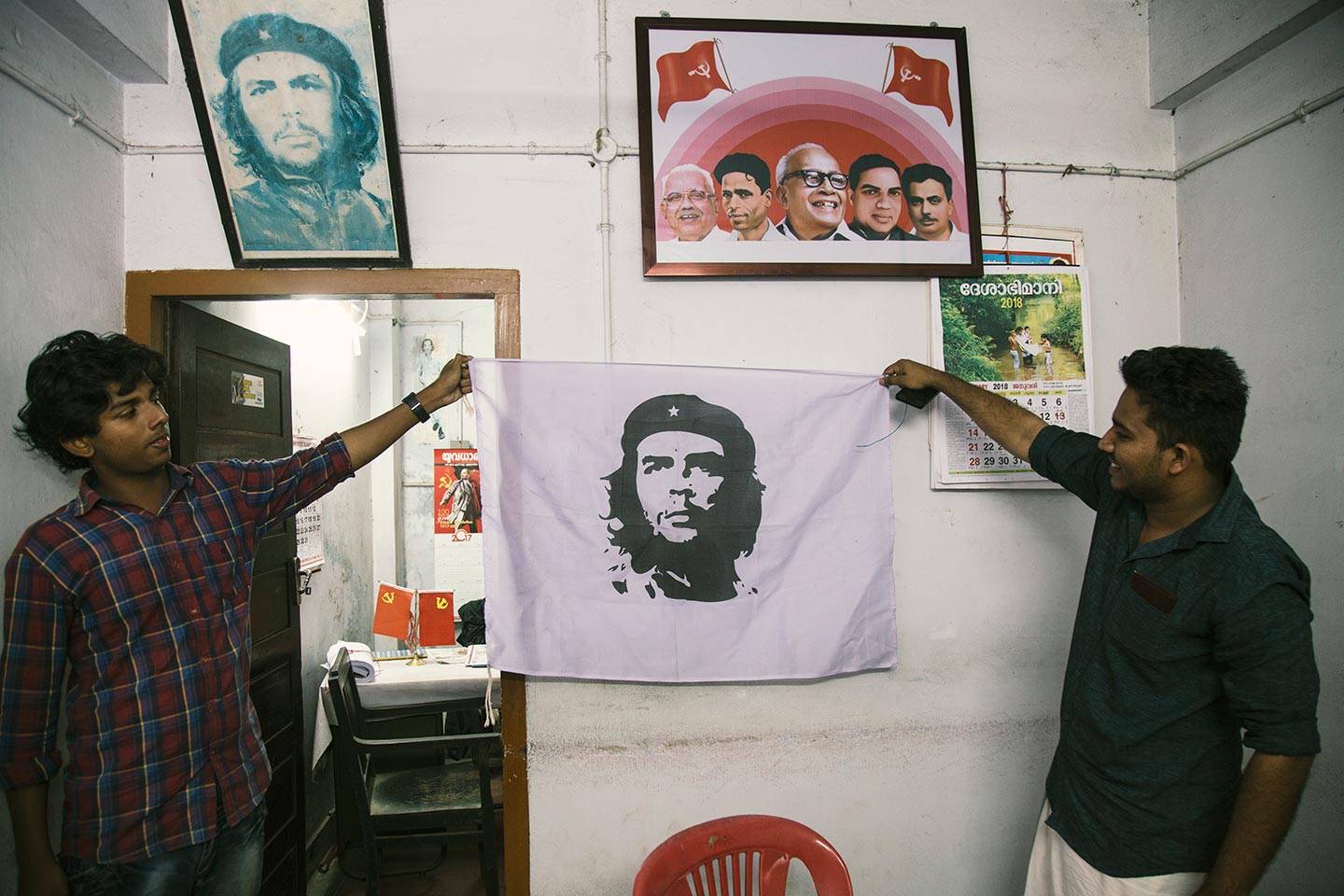 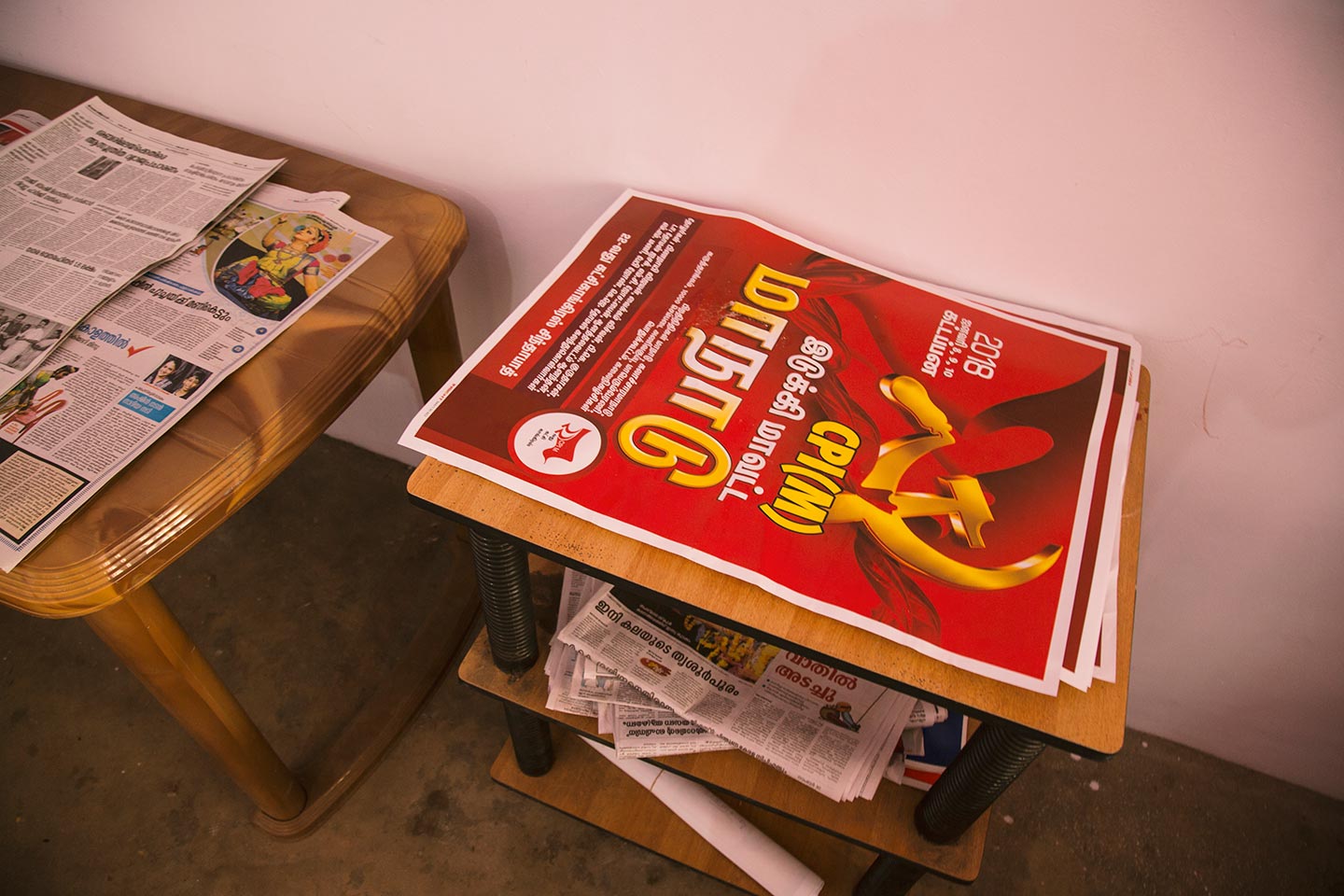 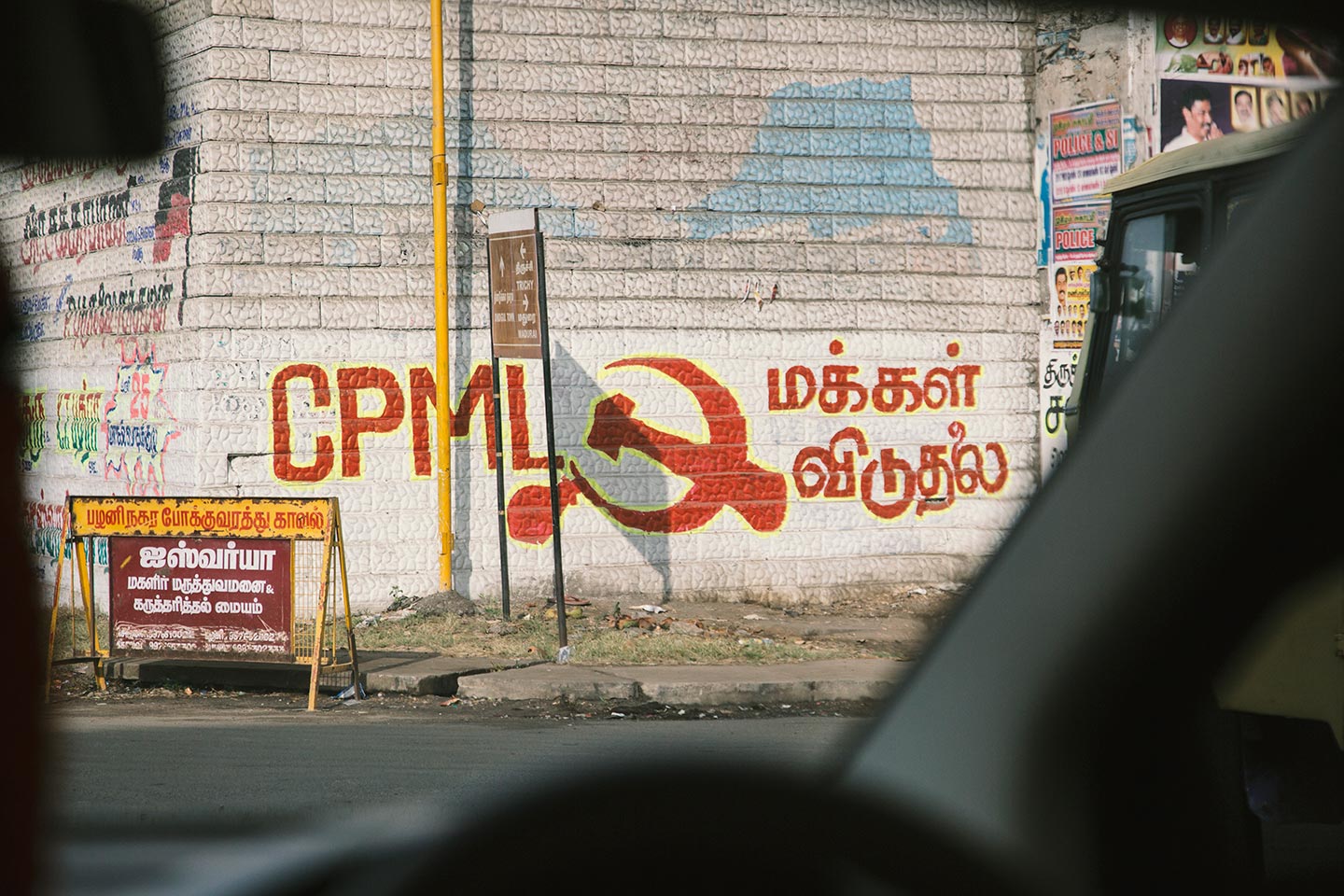 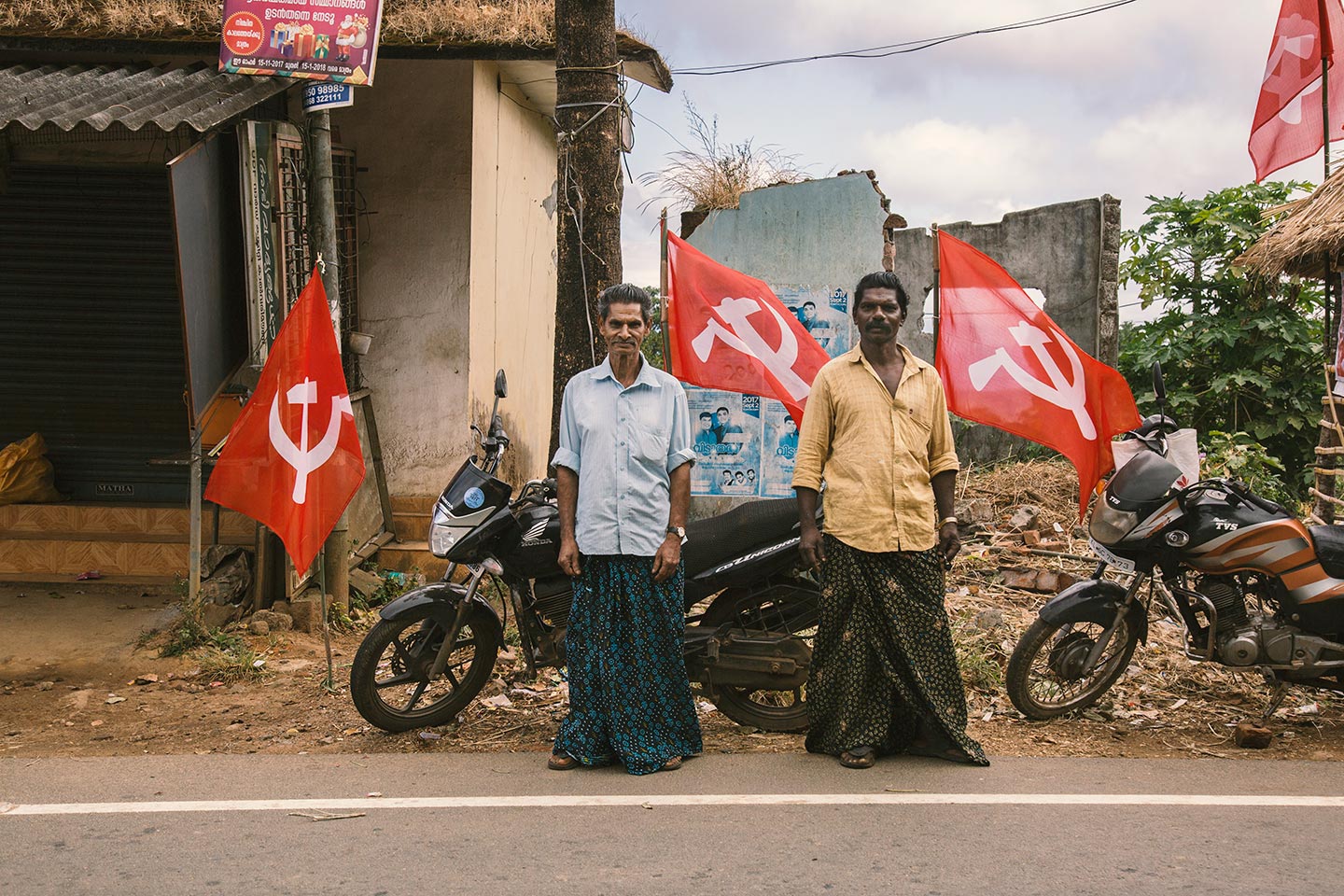 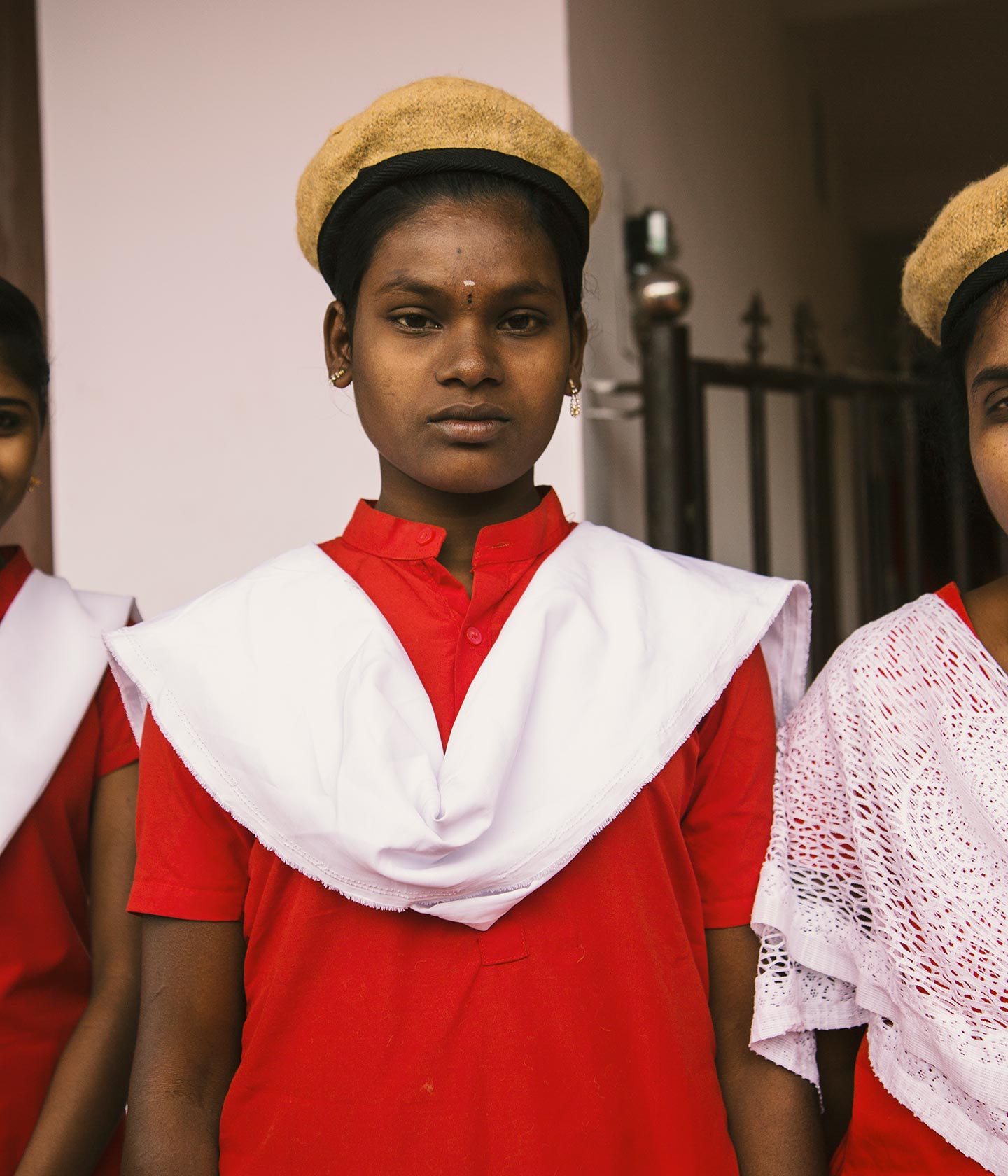 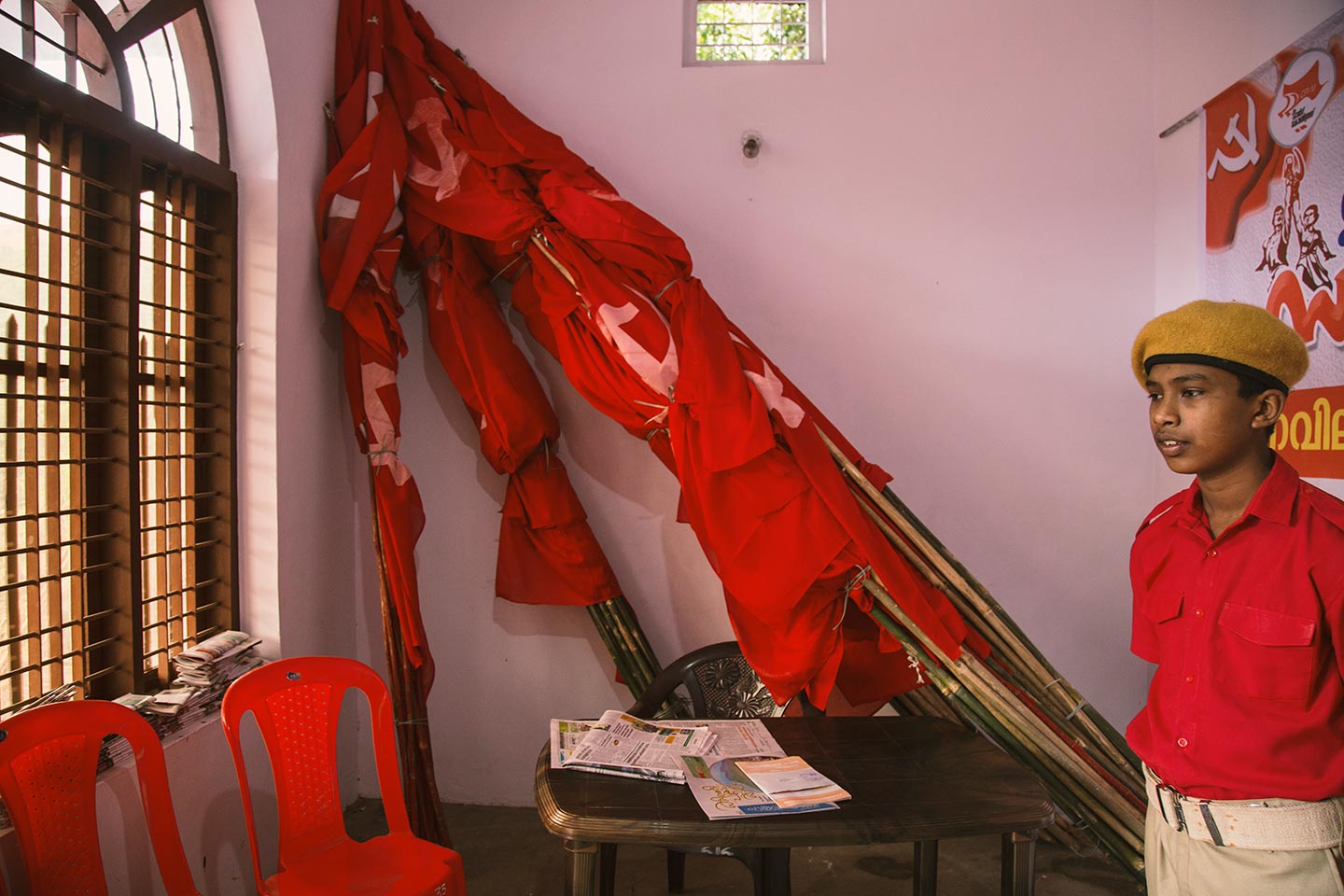 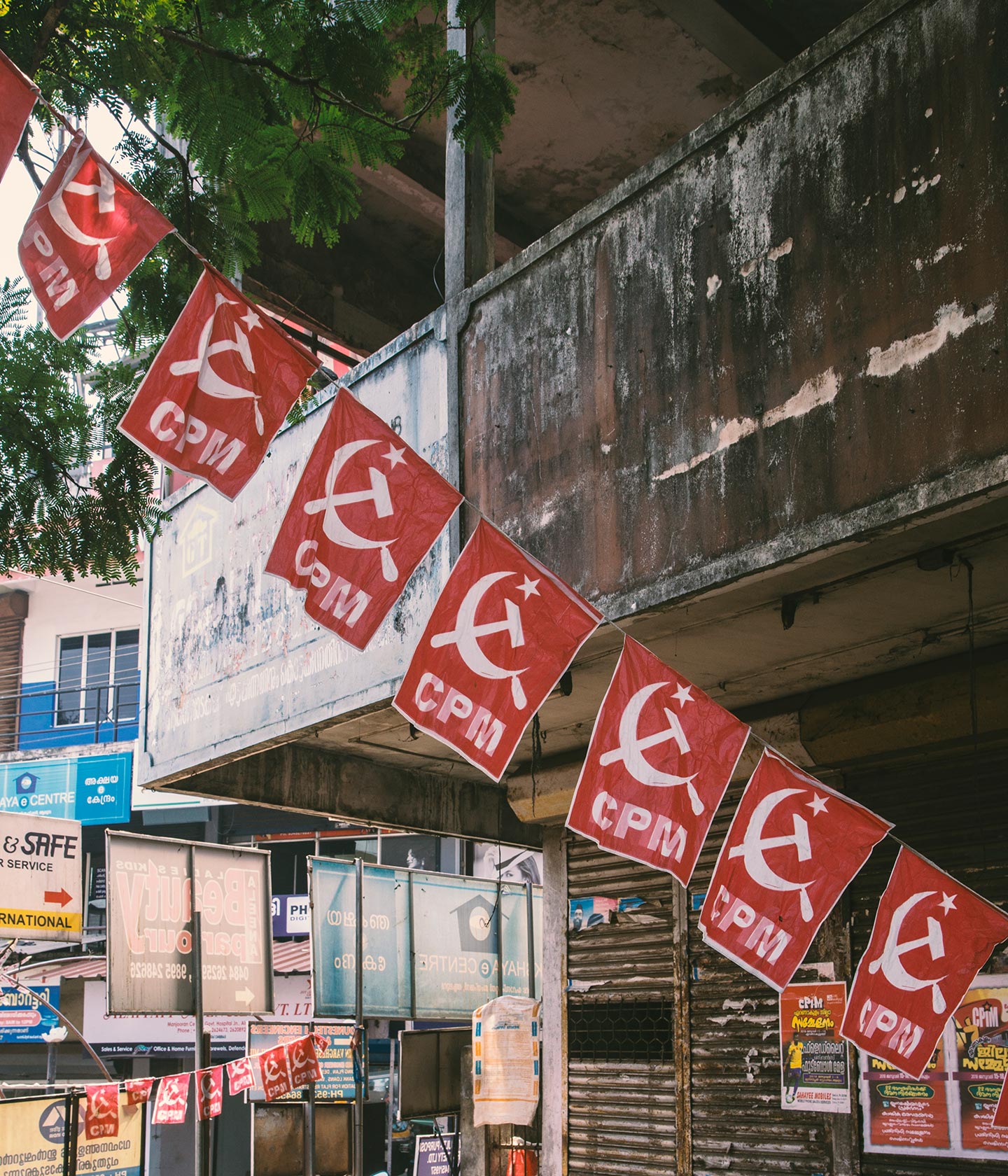 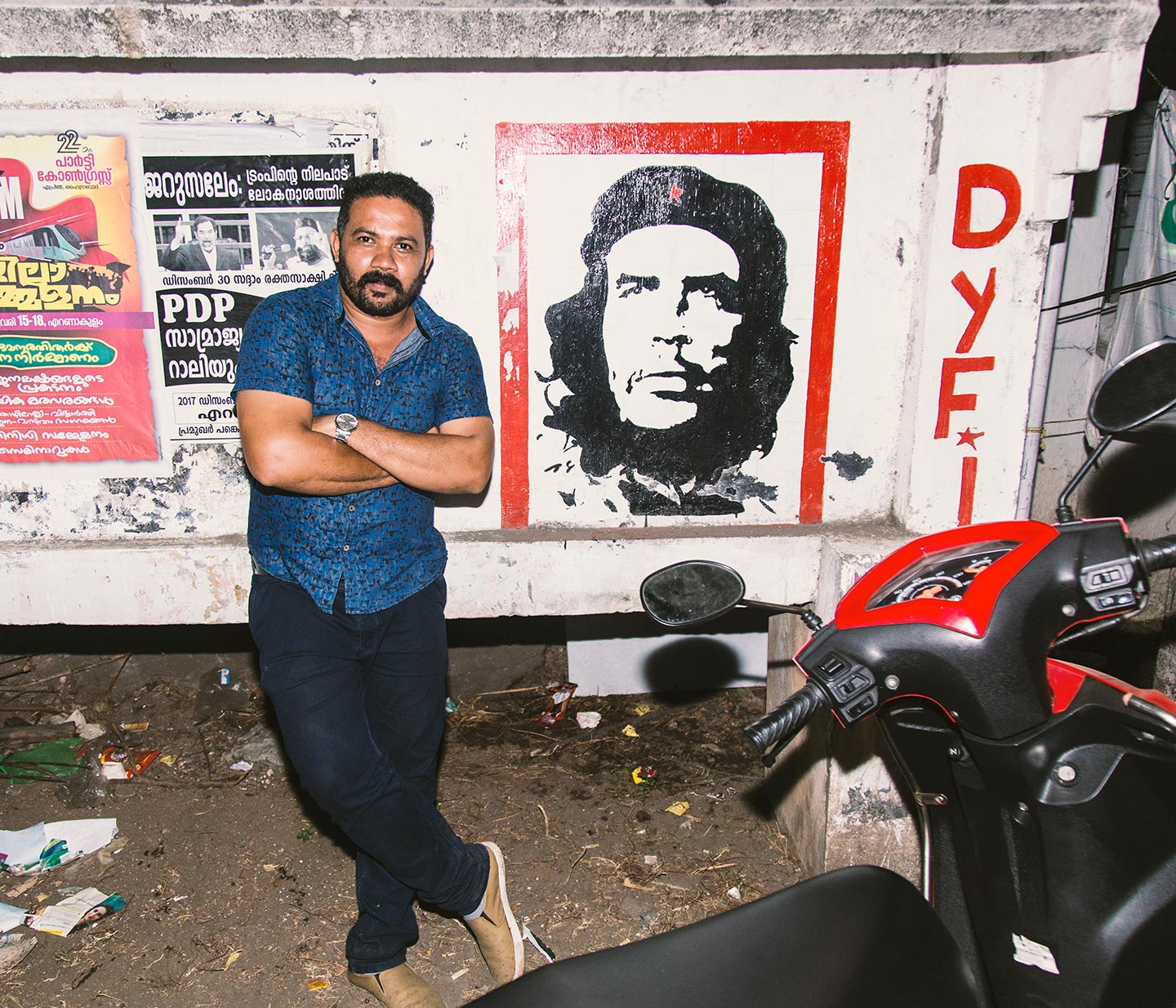 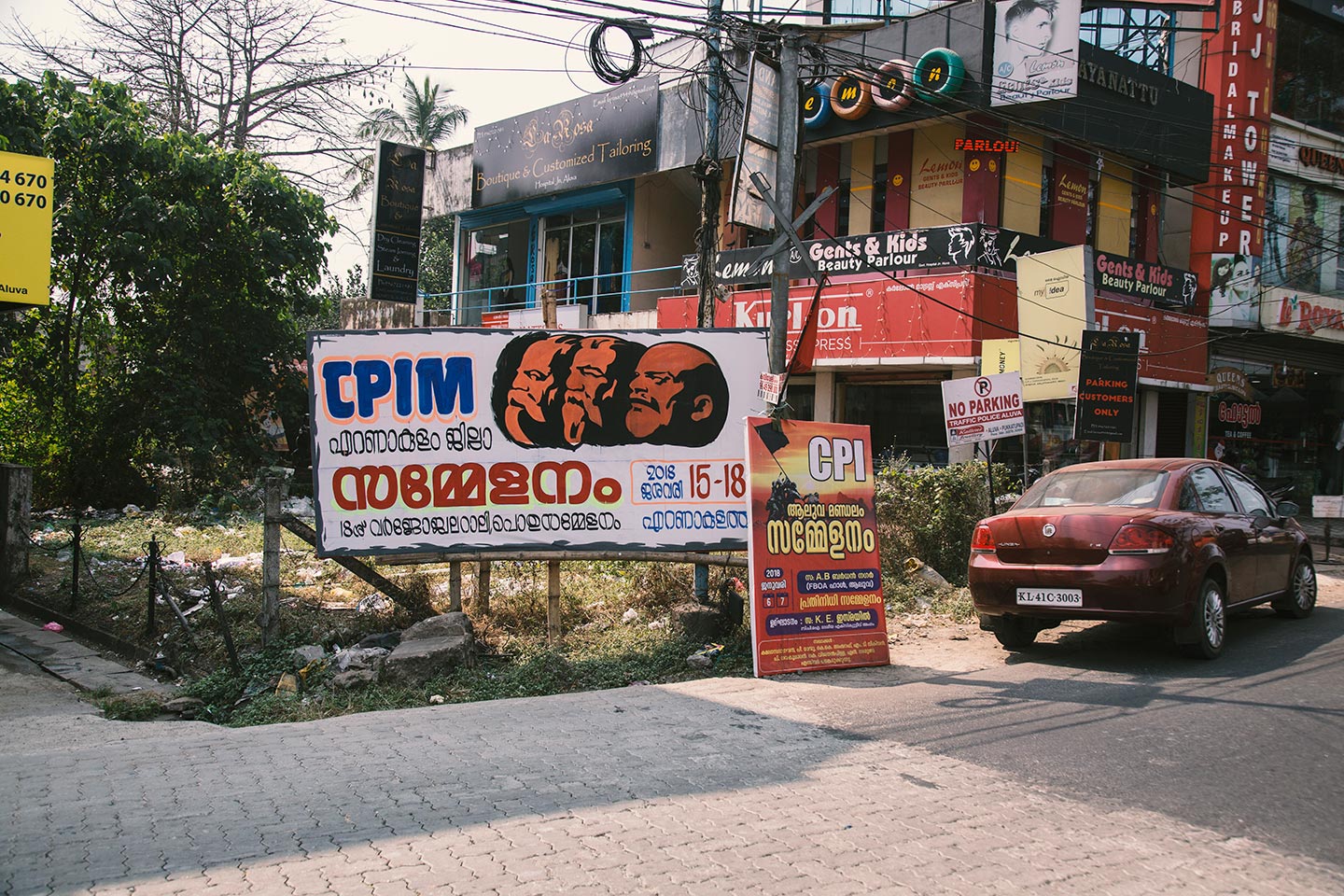 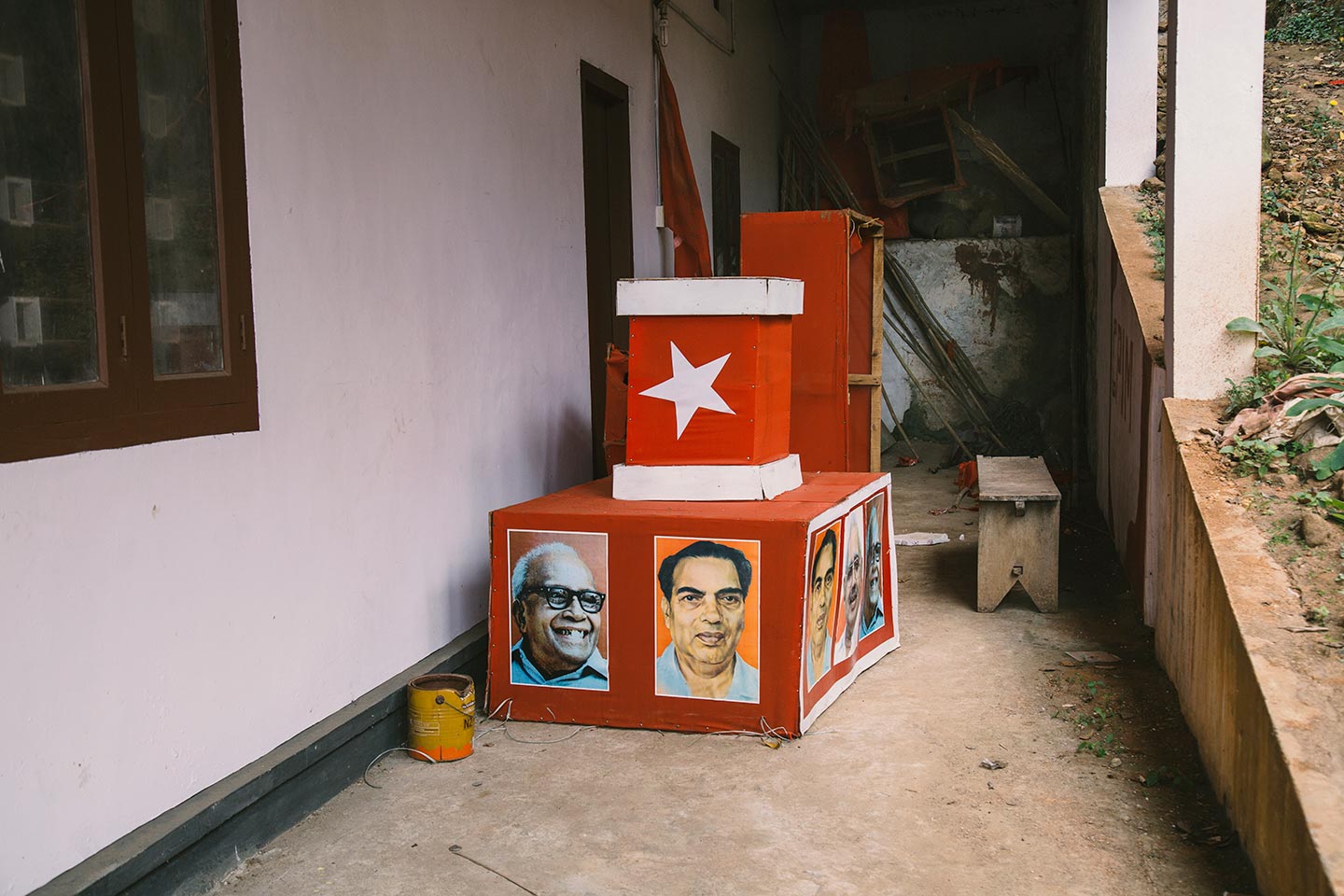 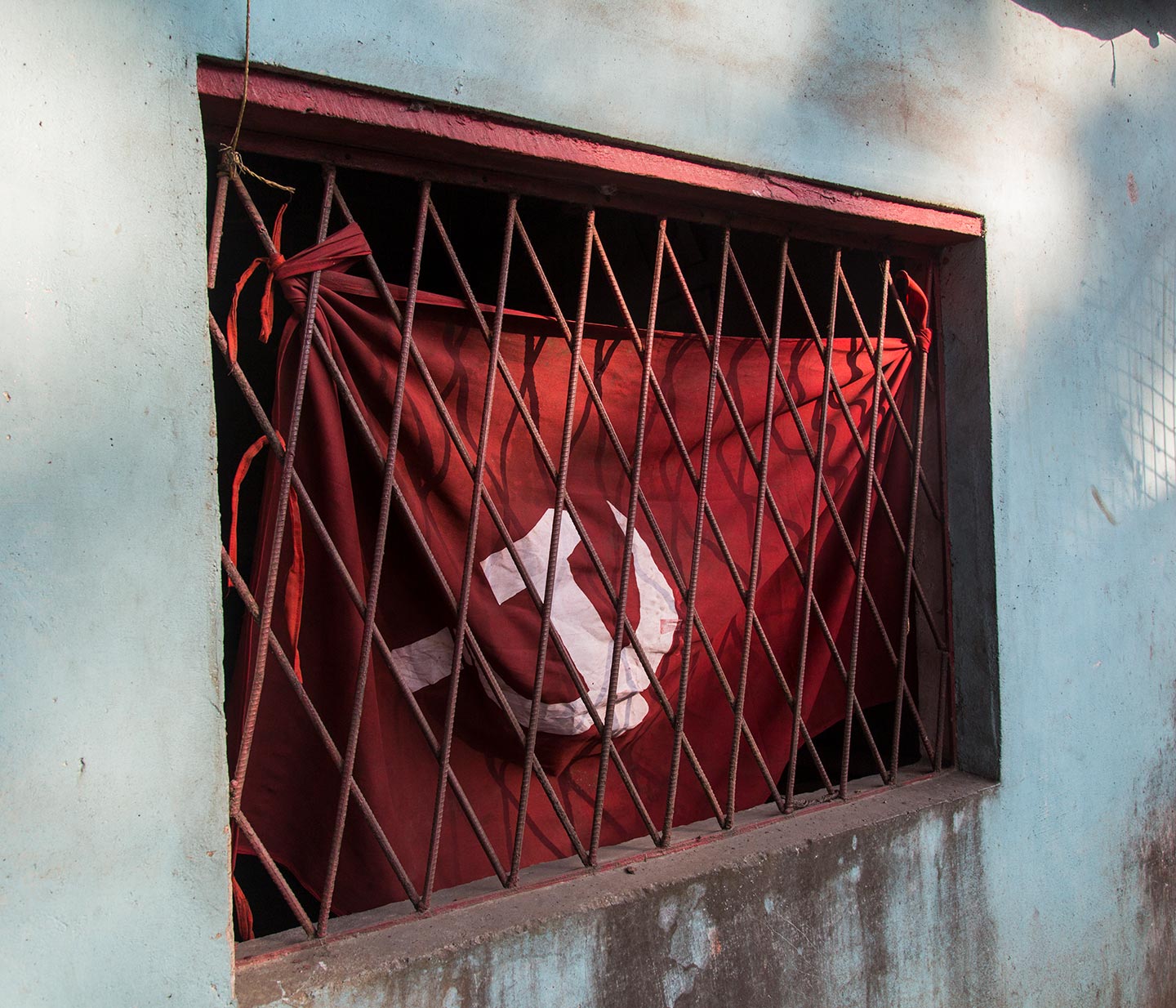 Red Kerala by 24 year-old Brazilian photographer Gabriel Melo is a series of images that “introduces viewers to the existence of Communism in a place where you wouldn’t expect it. The southern state of Kerala, India, has been electing leaders to represent their state nationally for the last 60 years. The photos depict nostalgia, a revolution that survived and adapted to live in India’s reality. They not only show Communism in its decorative form but also as a doctrine. Red is seen in every place you go, from the streets to inside private houses, from party offices to reunion halls. Posters of Communist leaders such as Lenin and Fidel Castro hang as a sign of idolatry much like the Hindu orthodox tradition—their figures are elevated to Gods.”

“Communism started gaining popularity in India after the Russian Revolution (1917), and eventually India’s first Communist Party (CPI) was founded. In Kerala, it gained even more strength after India declared its independence from the British Empire (1947). The country was left with a high level of social inequality, and Kerala happened to be the state with the highest rate of agricultural labour: the Communist party gained popularity by promising to reduce the gap between agricultural workers and landowners. Kerala also had one of the highest literacy rates due to Christian missionary influence and royal government investments: the locals were educated enough to be receptive to socialist ideas. Differently than in many other places, the Communist party in Kerala was also successful because it didn’t question many of the population’s traditional values, but shaped Communism to adapt to a religious culture while being aware of its democratic necessity.”

Gabriel had no plans to do a project about Communism in India, but he got the idea during the very first days of his visit to the country. “Red Kerala was very unexpected. There was no prior engagement with the topic or investment in researching the subject. I went to India without knowing what I would find, and when I arrived I was soon overwhelmed by the amount of Communist propaganda in the streets. I knew there was something to be looked at, to be brought to attention. Much of my inspiration while shooting the project came from my history classes, where we discussed, for a period of 2 years, the rise of Communism in certain countries and its political agenda.”

His goal with Red Kerala is to transfer the same sense of surprise he felt in India: “I hope viewers get as interested as I first got when I walked through the streets of Kerala not knowing anything about the state’s majoritarian Communist presence. One of the main ideas of this exploration is to let people know more about the unknown, test their capability of seeing beyond their own preset expectations of reality. Communism in Kerala challenges our presumptions of India. We tend to connect things to places, people to ideas, as it is the case of Communism, which is overly connected to countries such as Russia, China, Cuba, and North Korea, but little is known about its presence in countries like India.”

Such anomalies are Gabriel’s favorite subject matter: “I’ve noticed that in most of my work my interest is to either explore the unusual relationship between subjects and their environment, or to focus on stereotypical qualities found on people or things. I am attracted to ideas that challenge our pre-made expectations.” The main influences on his photography have been “the insights I’ve gathered while traveling and getting to know different cultures. I’ve lived in China for a couple years and then in the United States for 5 years. Sometimes I catch myself wondering about what would have happened if I had stayed in Brazil: would I have still become a photographer?”