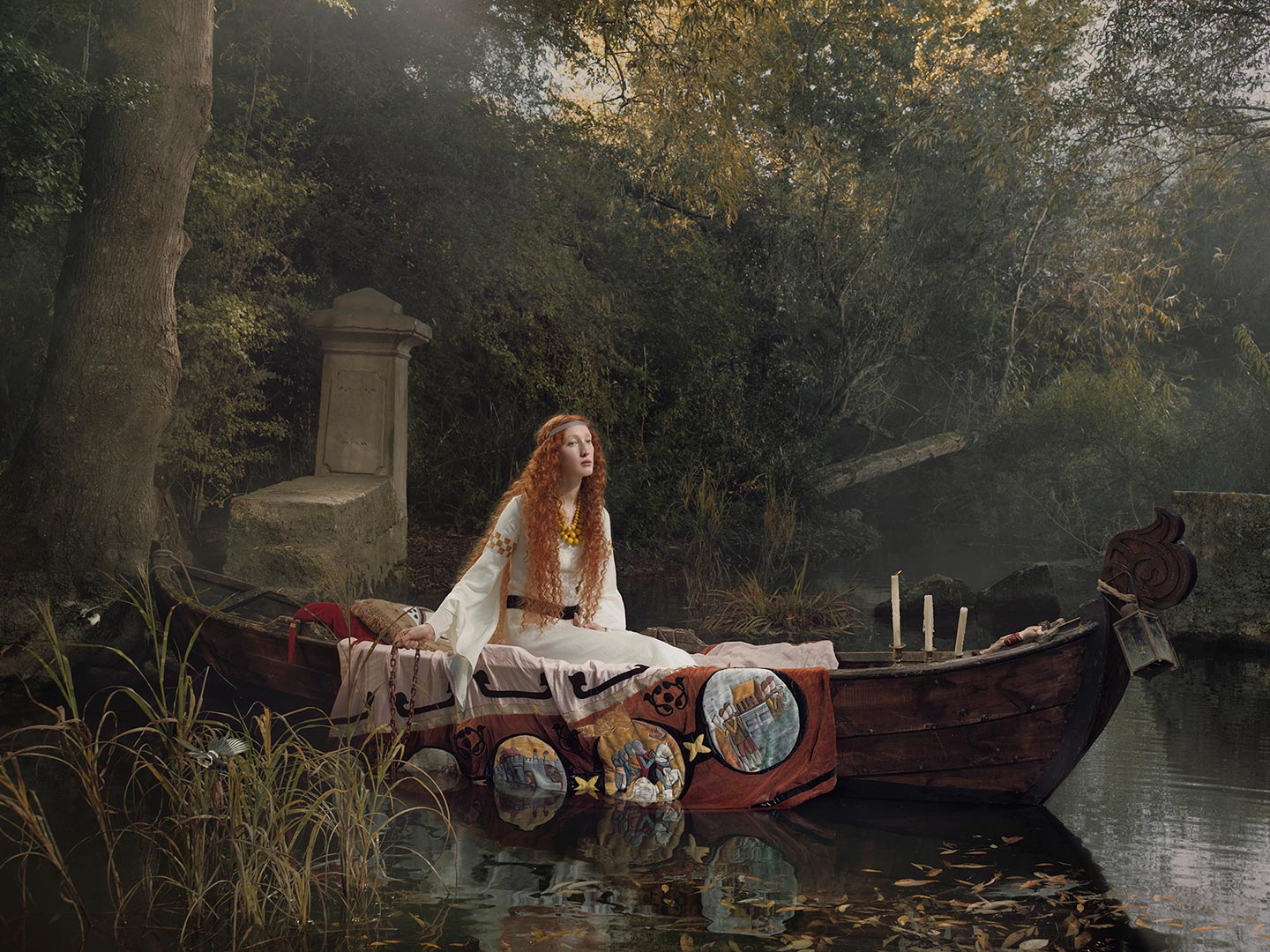 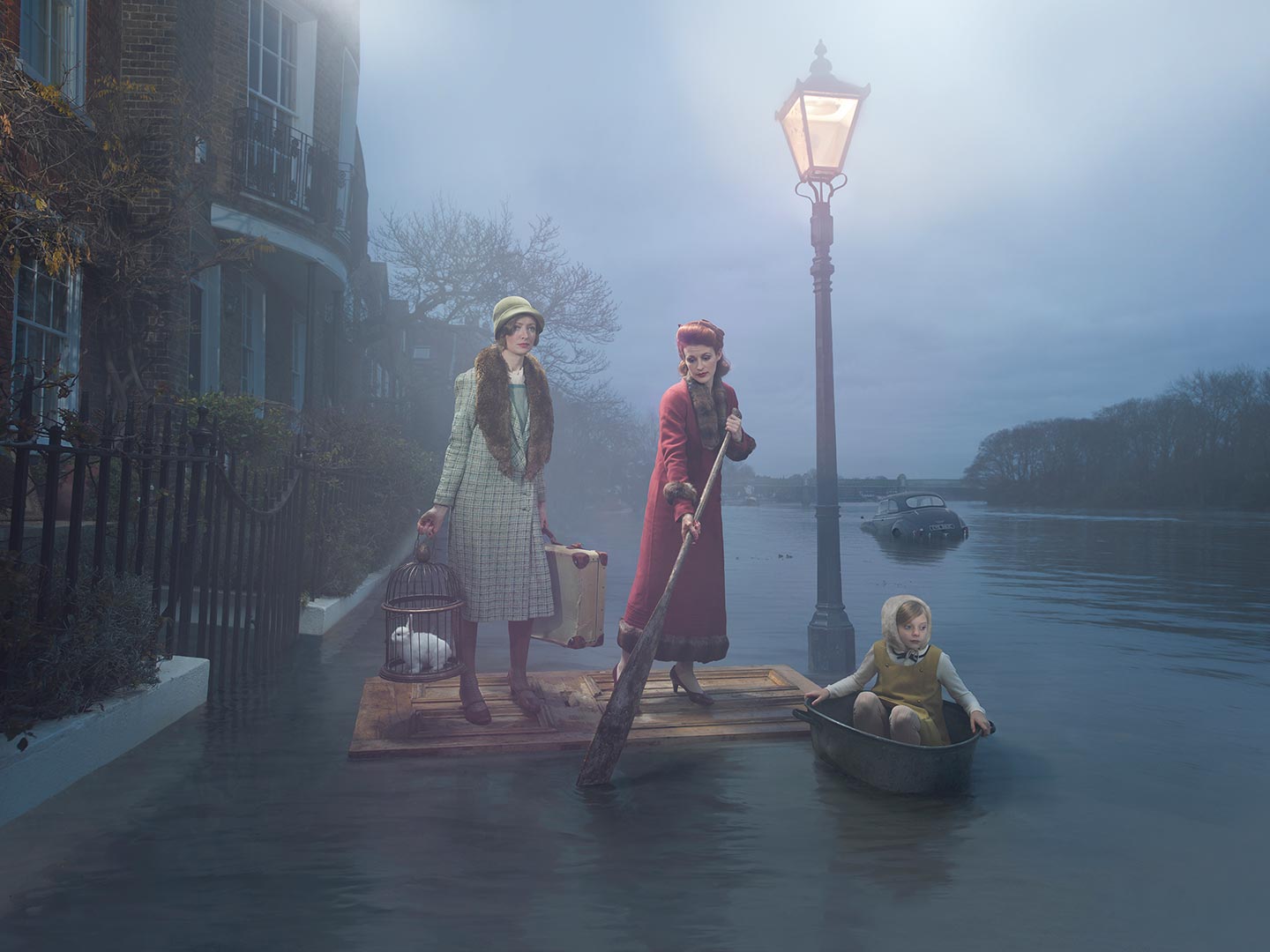 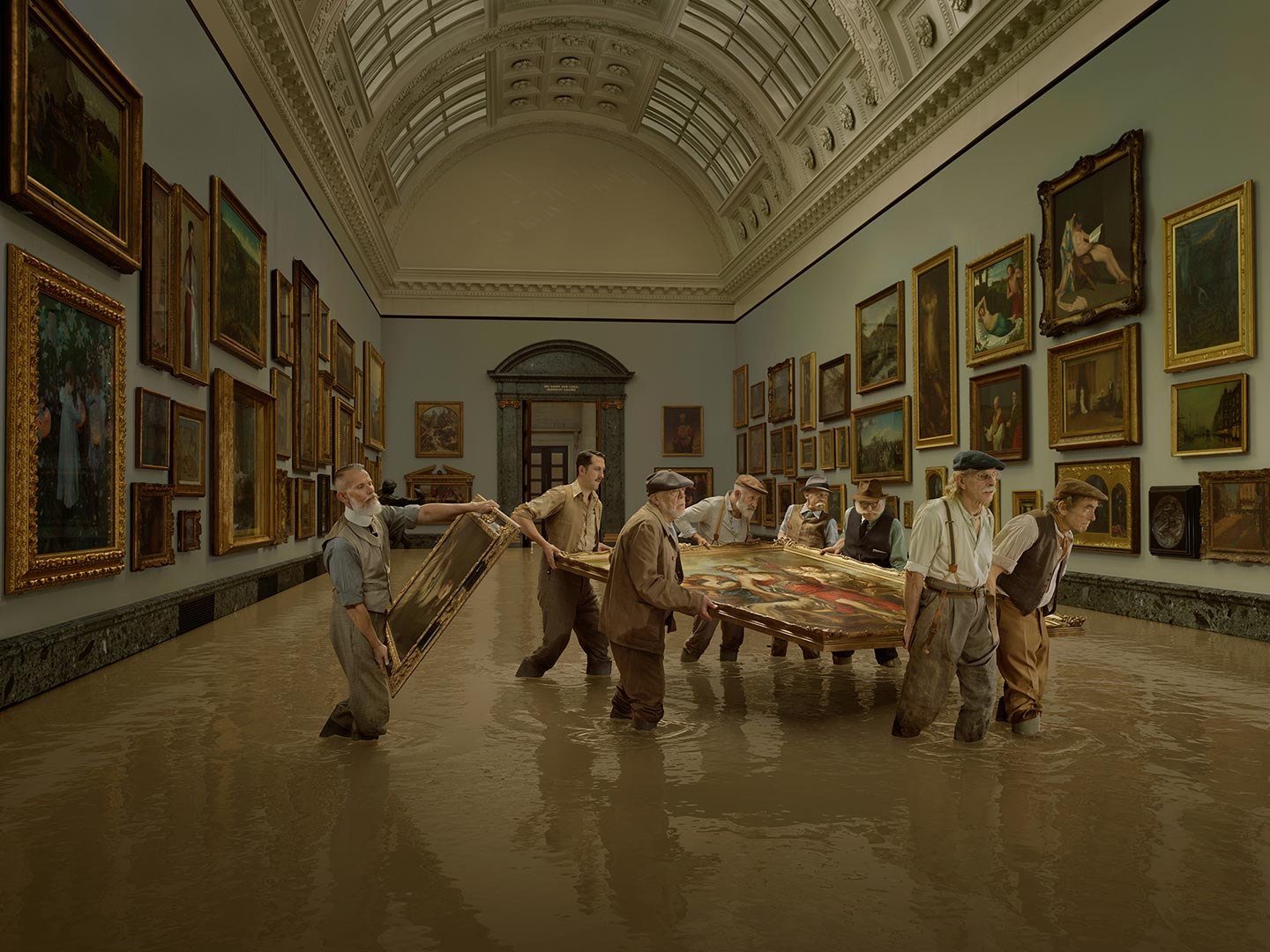 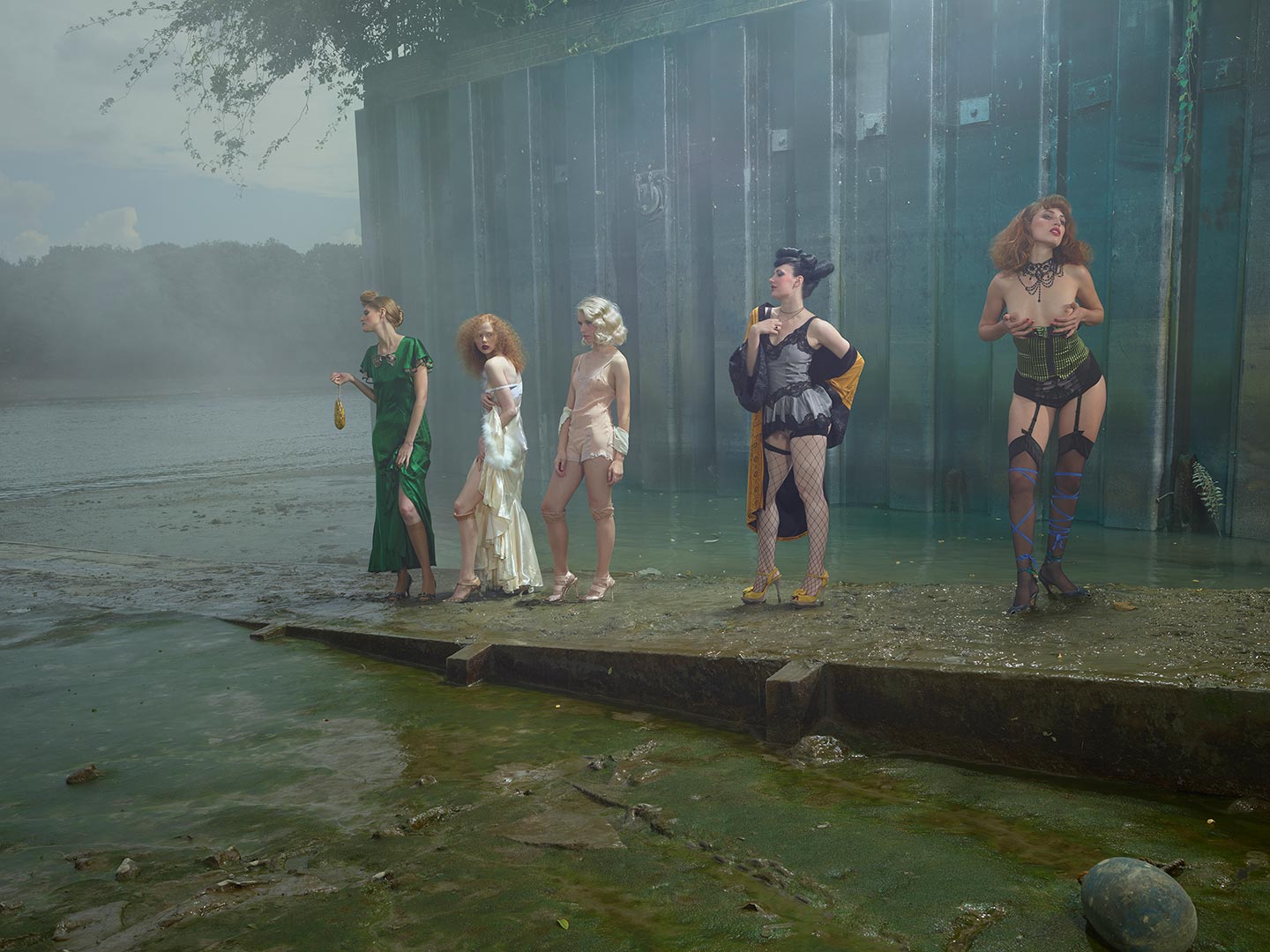 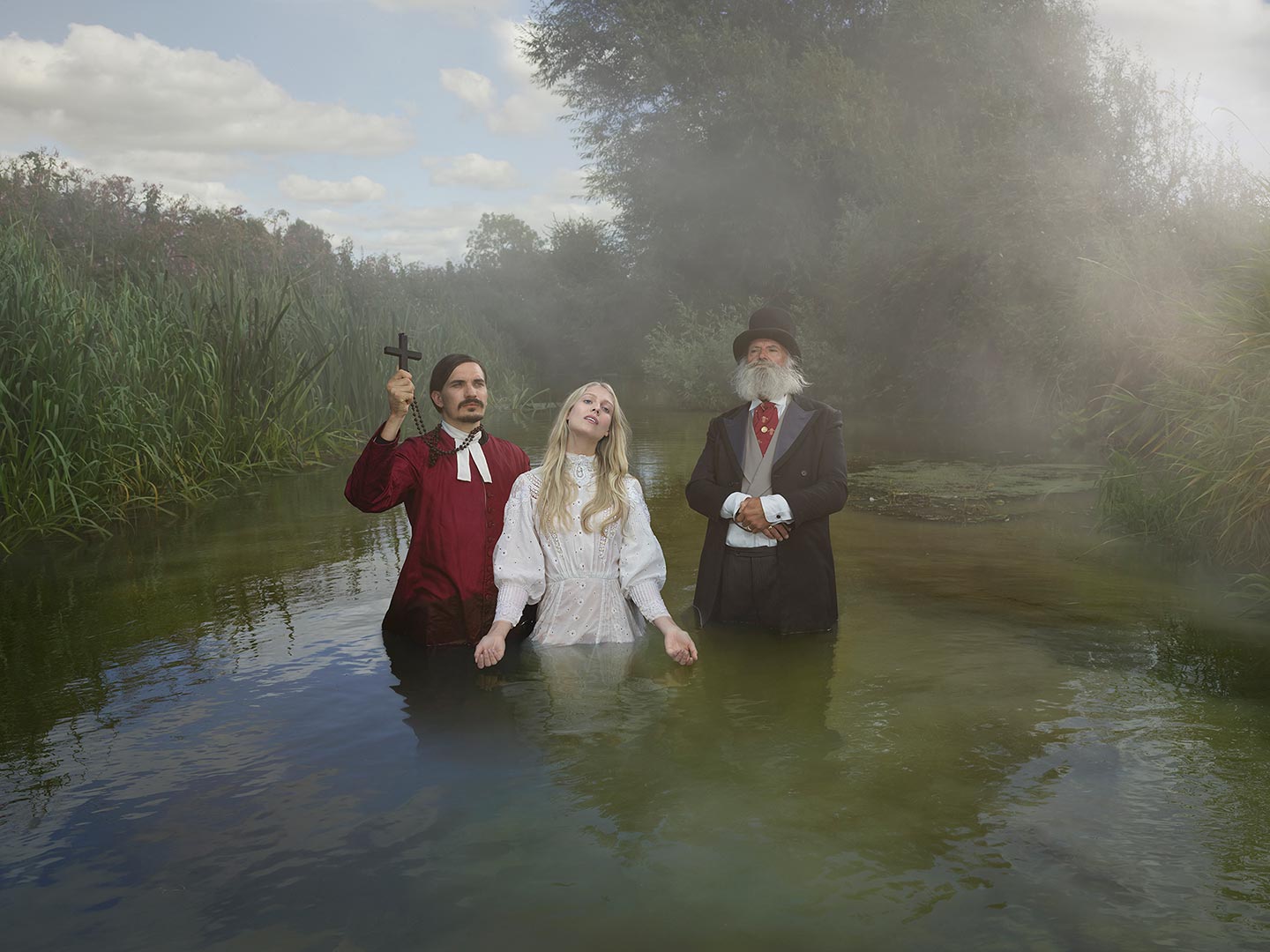 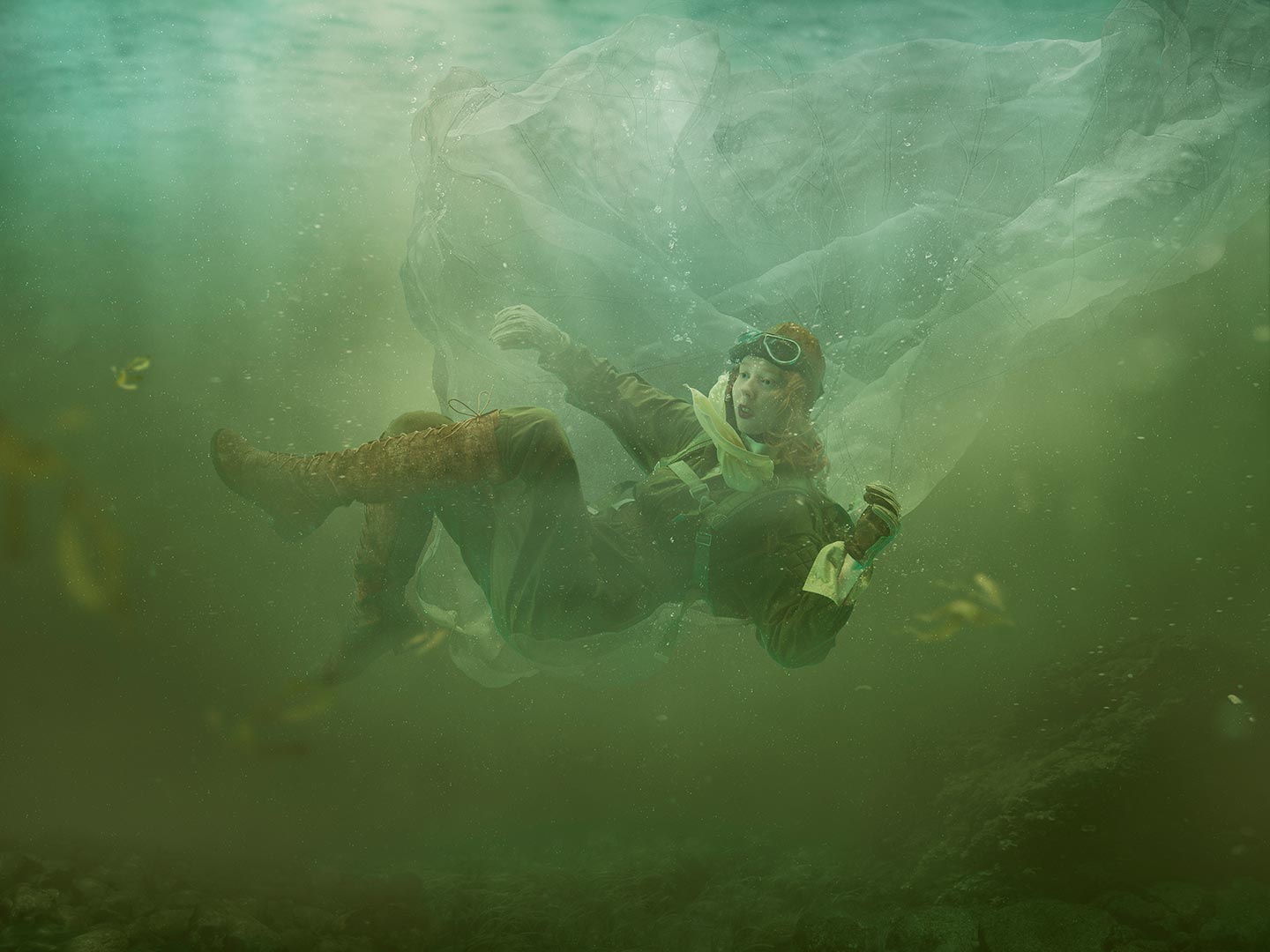 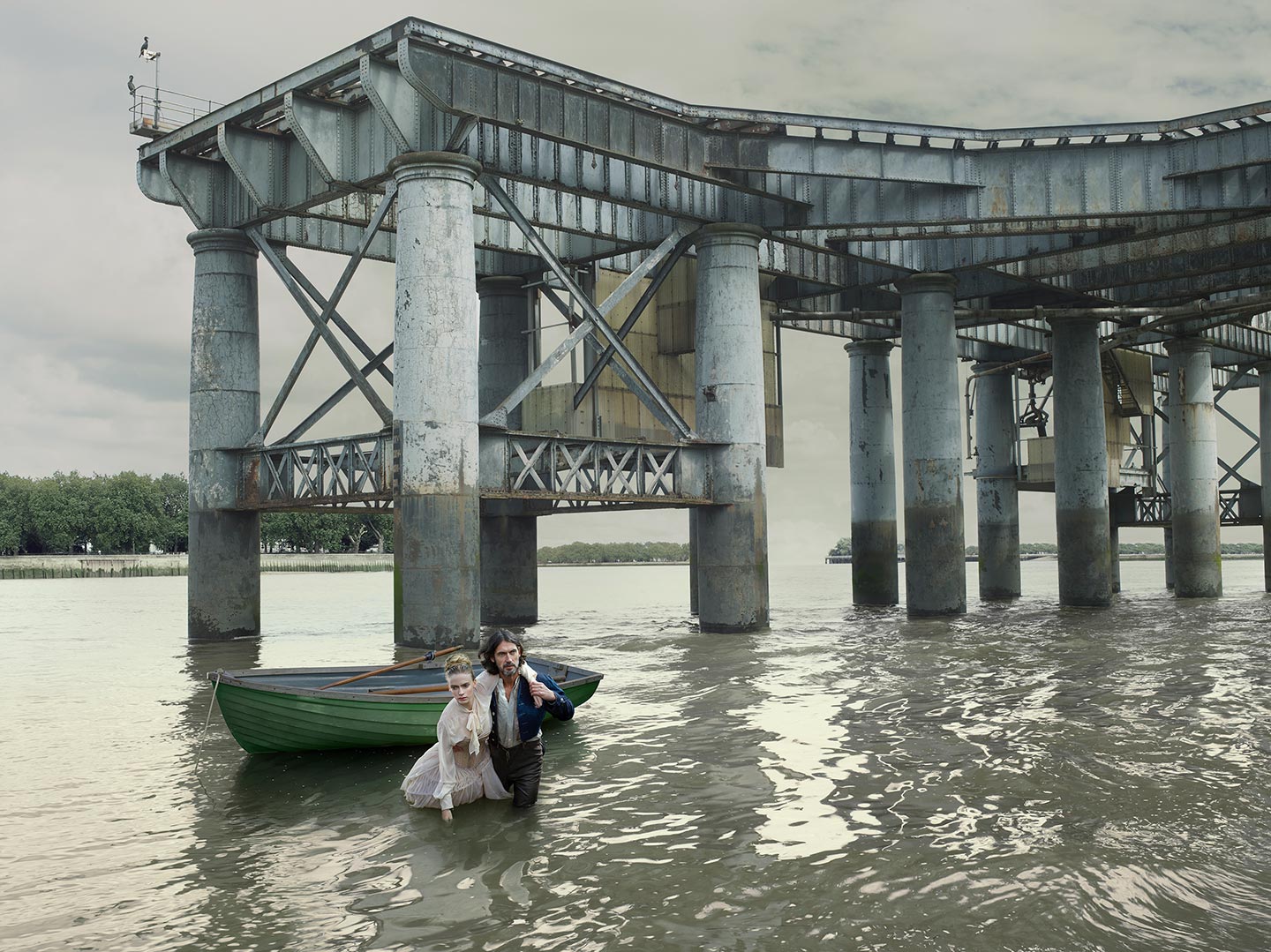 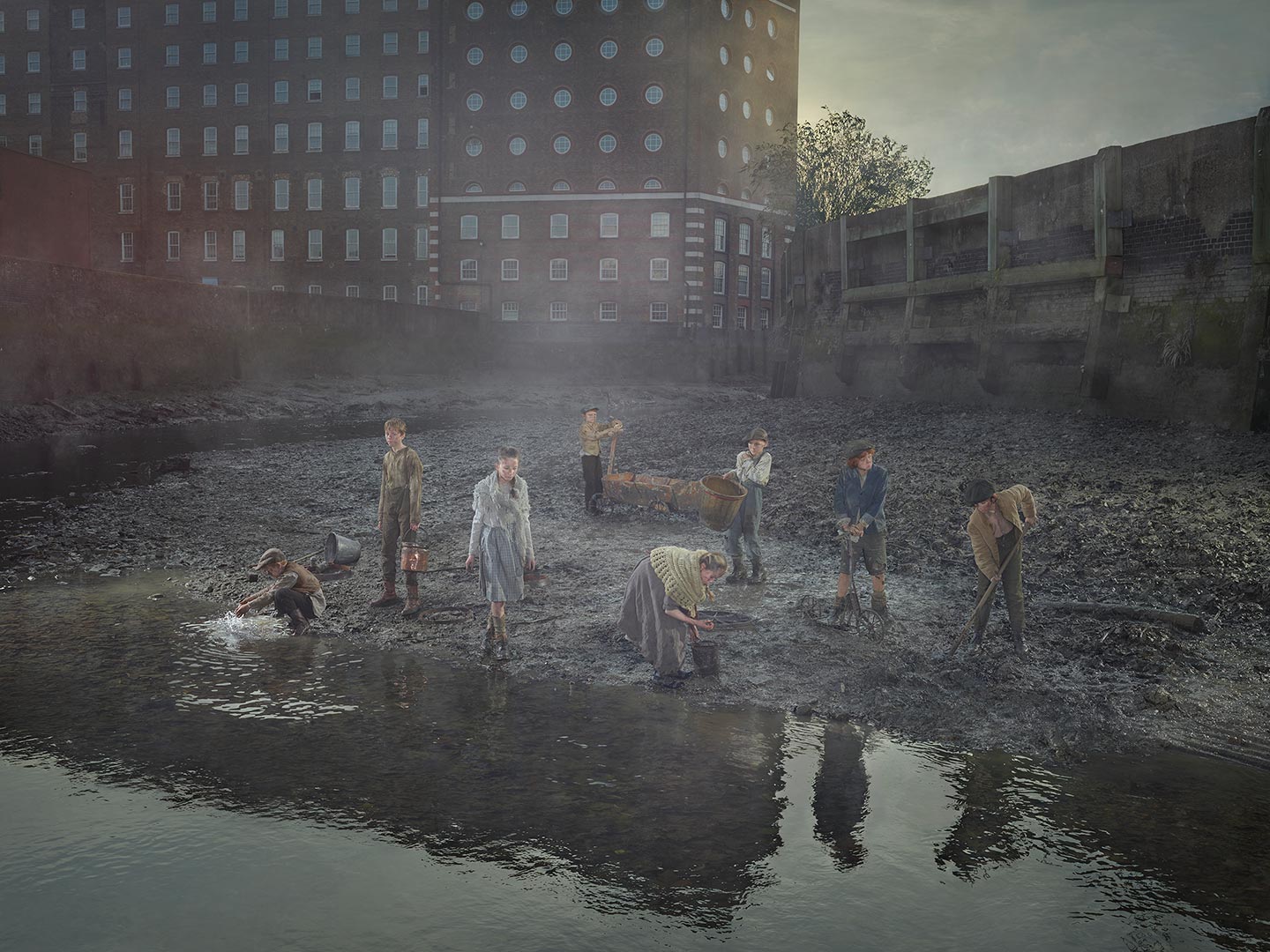 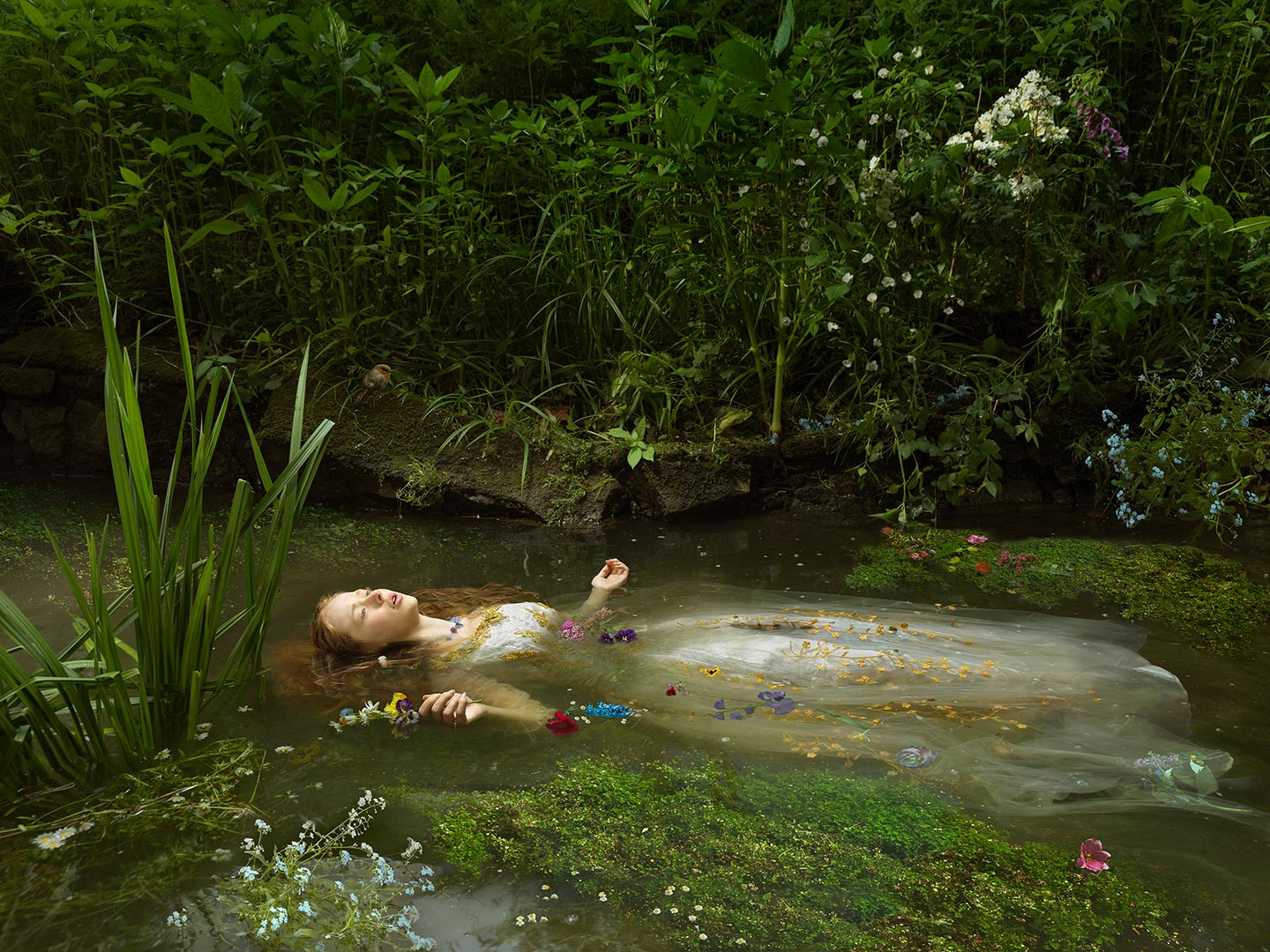 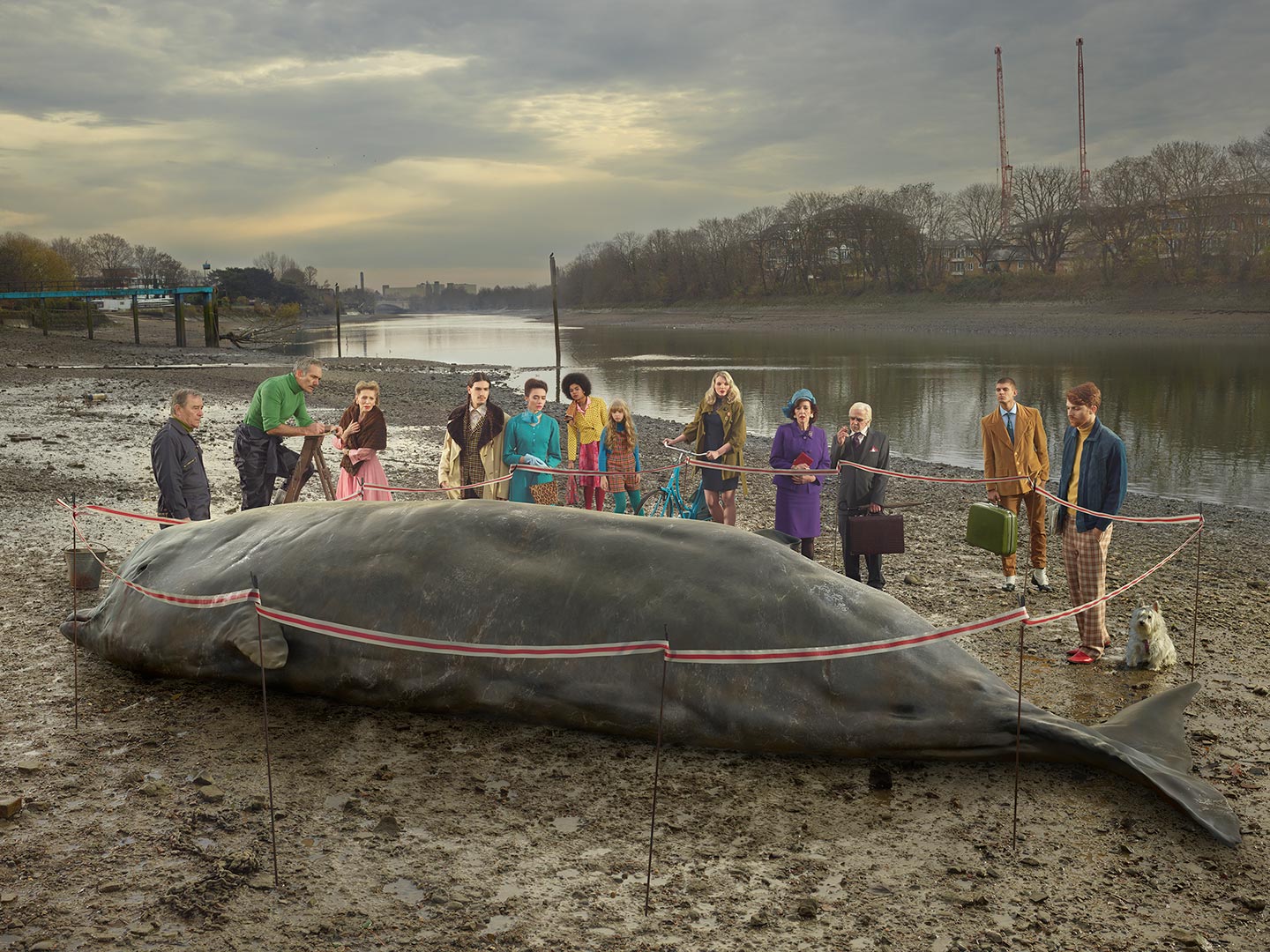 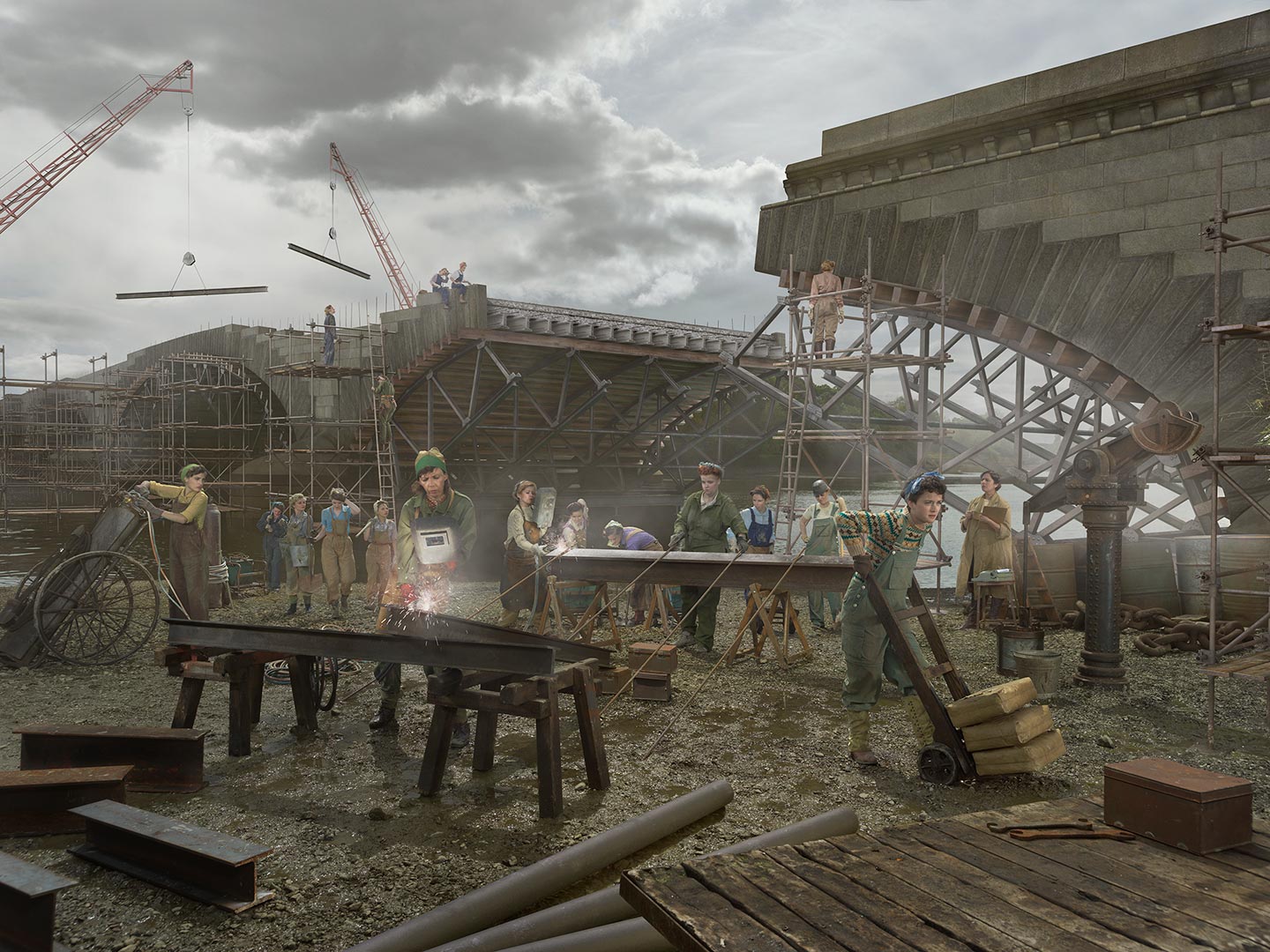 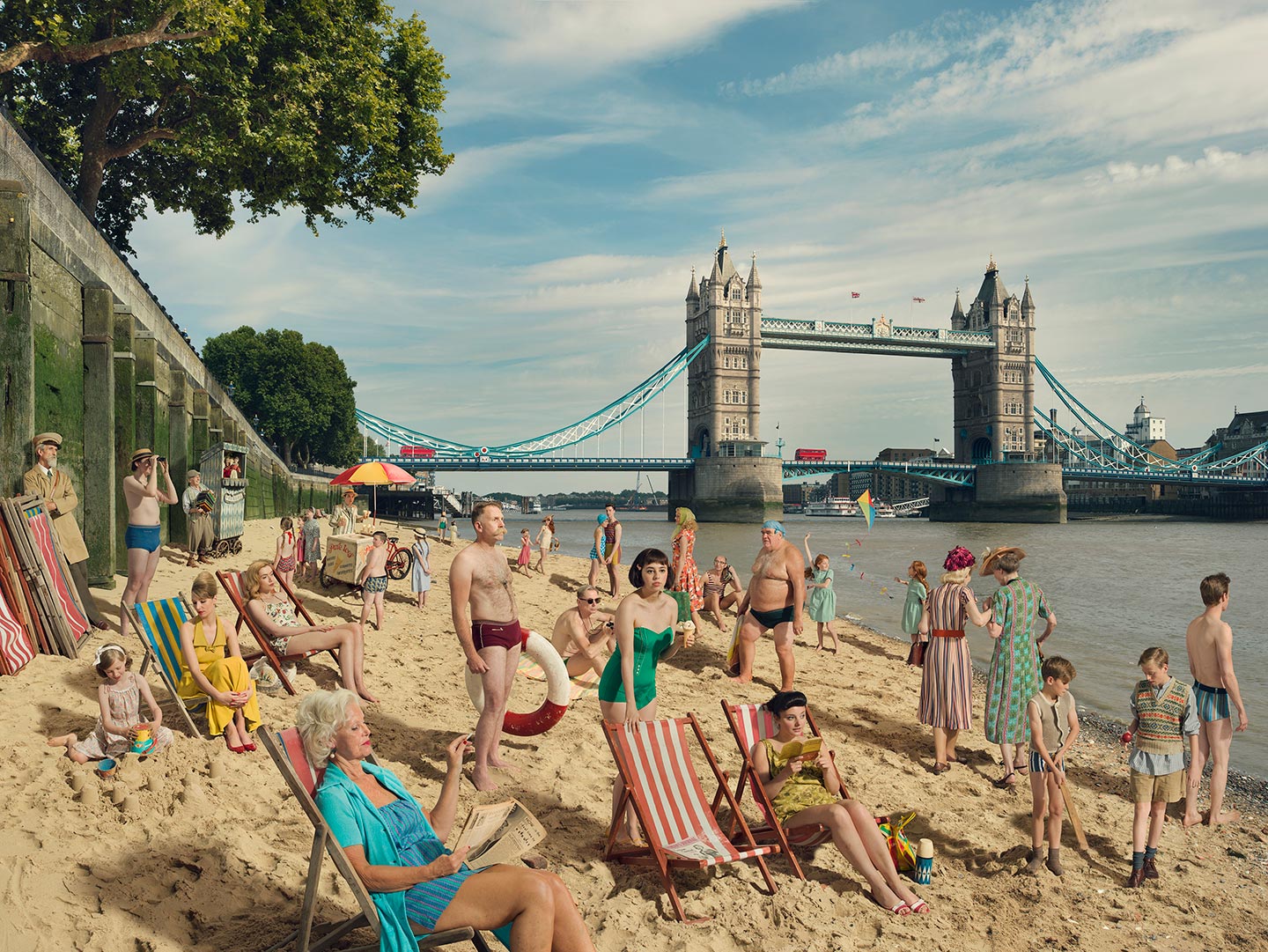 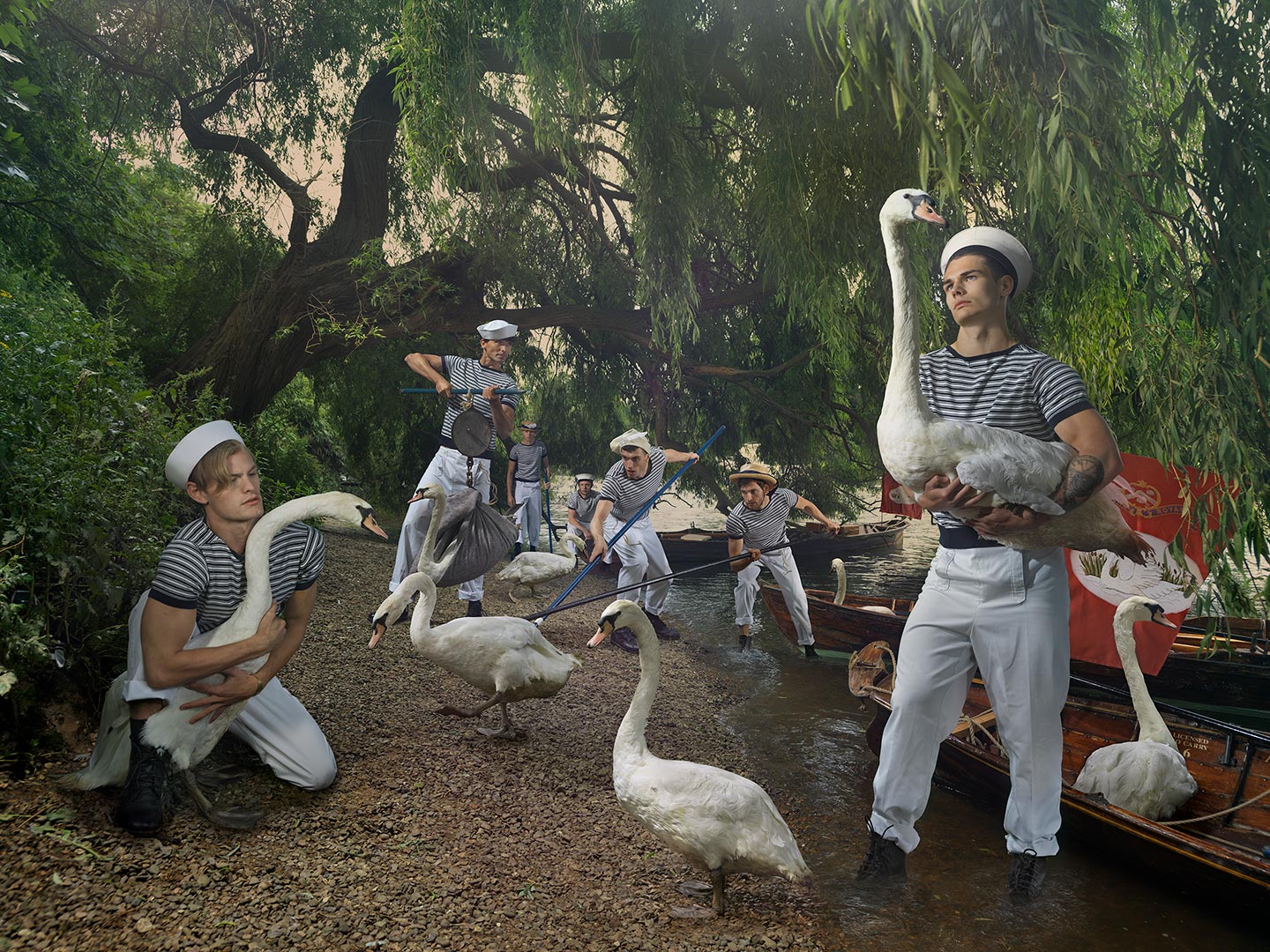 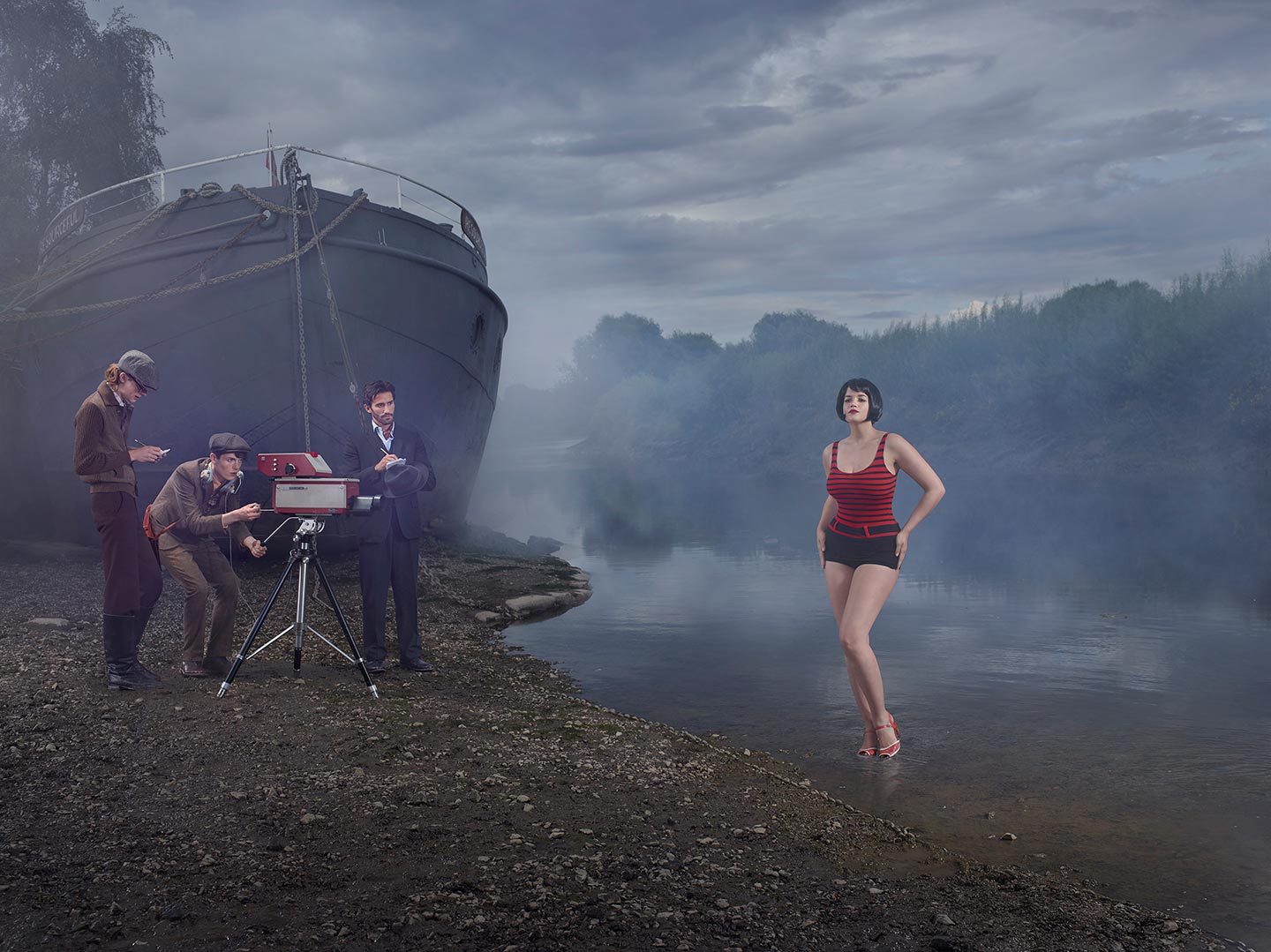 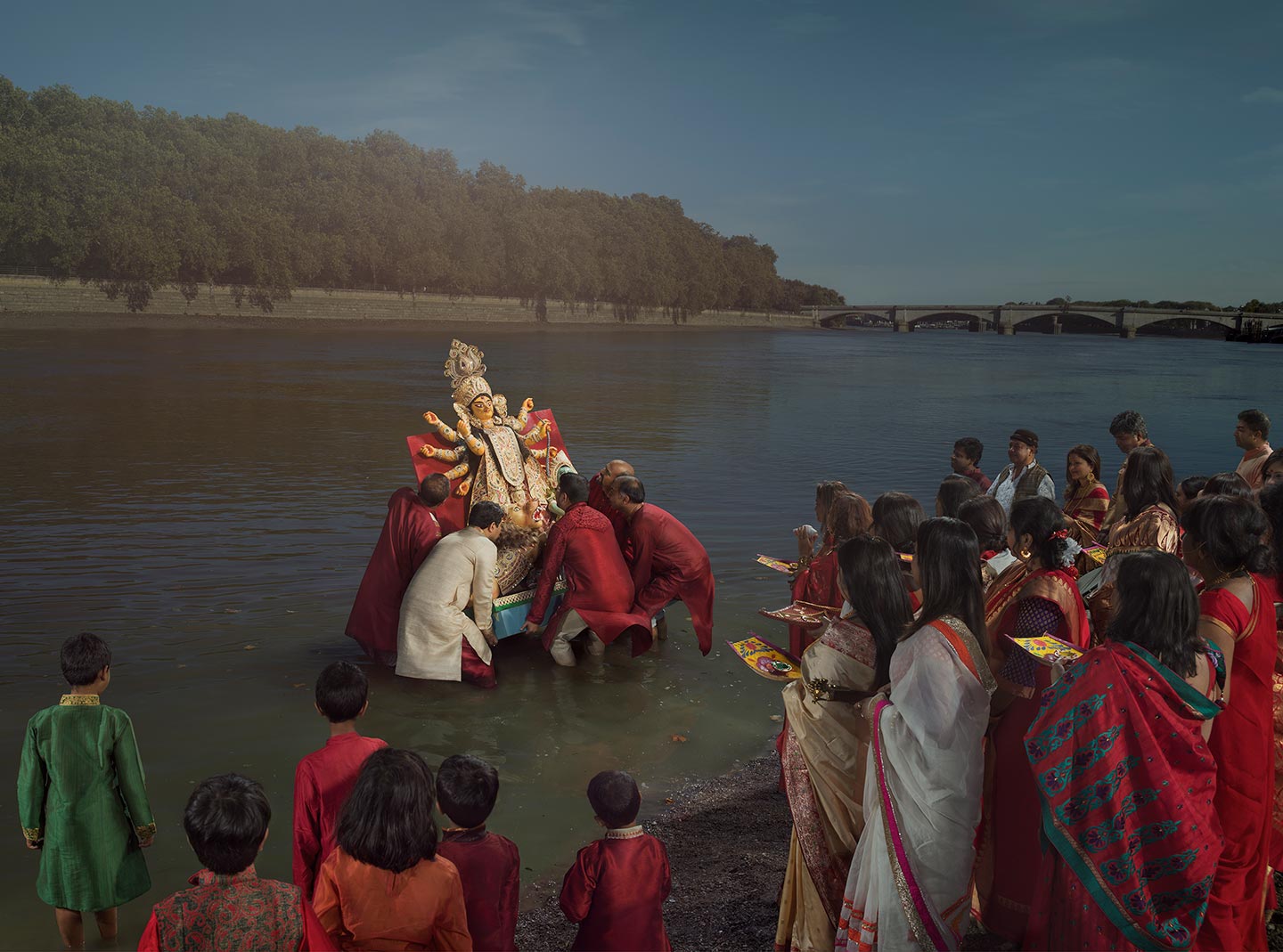 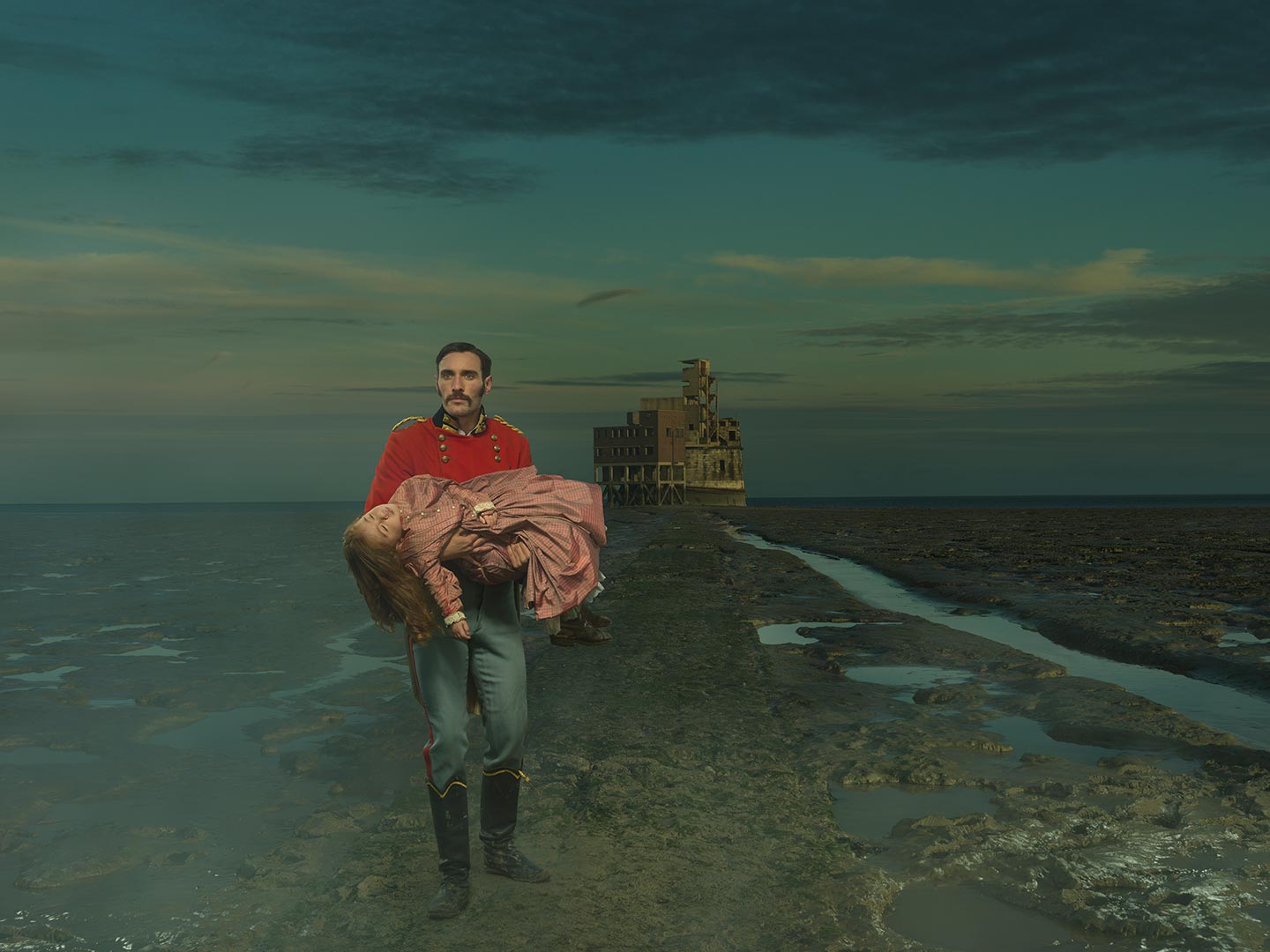 Old Father Thames by German photographer Julia Fullerton-Batten is a series of staged photographs inspired by “historical events, past and present traditions and customs that took place over the centuries along the Thames river, as well as many customs that still do,” Julia explains.

Her interest in the Thames has roots in her teenage life, when she moved to the UK: “My sister and I settled in Oxford for a number of years. The River Thames runs through Oxford, although there it’s called Isis; as a teenager I entered the spirit of Oxford and enjoyed the pleasures that the Isis had to offer. Some years later my career took me to London, yet again I found myself close to the banks of the River Thames, which served to increase my fascination for the river, reinforced by my passion for London. My husband, our boys and I regularly take walks along the river bank. About three years ago now, we donned our Wellington boots and walked along the foreshore of the river at low tide, much as the Mudlarks did in Dickensian times. I stood alone there for a few minutes, enchanted with everything around me and felt how incredible the history of the Thames must be, and thought to photograph people walking on the shore at low tide. But then came the question: how can I shoot them in my style? I couldn’t say to someone “Can you come back in an hour or so when I’ve set up my lighting?” And that’s how the idea for the project came about.”

The work turned out to be a very time-consuming and expensive one: “Typically, each image takes two to three months of research and work leading up to the day of the shoot. I had not realized how extensive this would become both in time, scope, and, to be honest, expense (I self-fund all my projects and do most of the pre-production work by myself).” Moreover, Julia had to face many challenges to reproduce the stories behind the images as faithfully as possible: “Sometimes being entirely accurate isn’t possible as skyline changes considerably impact the authenticity of historical shoots. However, I have been successful to find the exact location where events took place in the past. For example, I managed to find Hatchets Ford at Cricklade in Wiltshire, where full immersion baptisms took place until the mid-20th century. Another even more significant success was to find the exact location at Ewell in Surrey where the pre-Raphaelite Millais painted the river background for his famous Ophelia painting.”

Other difficulties came from the permissions needed to shoot in certain locations: “For some potential stories, there are restrictions on where one can shoot on the Thames, especially in or close to London. Every time I shoot there, I need a license from the London Port Authority and in some case for the Crown Estate or local authorities. Sometimes it’s just not granted.” The Thames itself created problems at times due to its fluctuating water levels: “Just upstream from London, the Thames becomes tidal, water levels increase and decrease dramatically twice a day—up to 7 meters in the Port of London. This severely restricts the time available for setting up, carrying out the shoot and then removing everything afterwards. When we photographed the Grain Tower all the equipment had to be transported by hand from where we could park the vans on the shore to the location, nearly a mile away. For the Ladies’ Bridge image eight sturdy men were needed to carry one prop onto the foreshore and off again.”

“My choice of stories so far has been made based on those that I personally have found interesting, appealing and emotionally satisfying,” Julia says. One that has touched her heart deeply was that of Amy Johnson: “She became world famous in 1930 as the first woman pilot to fly solo from Britain to Australia. She also made other record-setting long-distance flights, crashing her plane on landing in a couple of instances. When WWII broke out, she and other women pilots volunteered to join the Air Transport Auxiliary. Their job was to deliver military aircraft from the manufacturer to air force bases throughout the UK. She was transporting a plane from a factory in the north of England to an air force base in Oxfordshire during a storm and she lost her way. She ran out of fuel over the Thames Estuary and was forced to bail out. Crew aboard a minesweeper saw her parachute enter the sea close by. The ship’s commander dived into the rough seas to rescue her but was unsuccessful. Amy Johnson’s body was never found. Sadly, the commander died from hypothermia two days after he tried to save her.”

Ideally, Julia hopes that Old Father Thames will be “an eye-opener to many people around the world. I’ve found already that my images appeal to different segments of audience. On the one level there are the native British, who are curious about their capital city and the river running through it; but also, there are foreigners to whom they appeal. I have sold a print to a collector in Peru. The stories I narrate in my images are very often not known—that the Tate Gallery was flooded in 1928, and the story about the Ladies Bridge just had to be told. With my image of the Durga Immersion in the Thames I have also illustrated the multi-culturalism of London and the UK and stretched a hand out to the Bengali diaspora.”

For Old Thames River, Julia used again her signature aesthetics that make her images look as if they were created entirely at the computer: “I am renowned for my complex lighting technique which I have honed during my close to 20-year career. I use small pockets of light and cross lighting, mostly in areas where it is least expected, and mix these sources with daylight. The result I achieve is highly cinematic and produces unusual effects. This gives an oddness to the image which I like but can confuse the viewer and perhaps mislead them into thinking that my images were digitally created. For most of the images I shoot ‘in camera’ I use very little digital creation or post-processing. Whenever possible I always adhere to my principles in this respect. However, there were a few instances during this project where in order to tell the story I had to resort to CGI to create a part of the image. One doesn’t find a whale as a prop, nor a half-constructed Waterloo Bridge…”

“I enjoy big productions and spend an immense amount of time on an image to get the perfect frame that tells the story in the way I imagined it,” Julia adds about her photography. “Although pre-production can be frustrating at times, I enjoy aspects of it very much; for example, the location research when I will go through file after file online of locations before I narrow my choice down to one that appeals to me best. I then go and visit it several times to confirm my choice, get an impression of the atmosphere and the ambient lighting. Another pleasure is the prop hunting—scouring the prop houses in London to source them. I am incredibly lucky to be living in such an amazing city where photographers can find so much decent stuff to satisfy anybody’s wishes.” The main influences on her practice have been “cinema, art books and galleries, exhibitions, the works of fellow photographers, everyday life, my own imagination, my drive to produce an image to tell a story.  ” Some of her favorite contemporary photographers are Jeff Wall, Jeff Bark and Bill Henson. The last photobooks she bought are Alex Prager ‘s Silver Lake Drive and Gregory Crewdson’s Cathedral of the Pines.