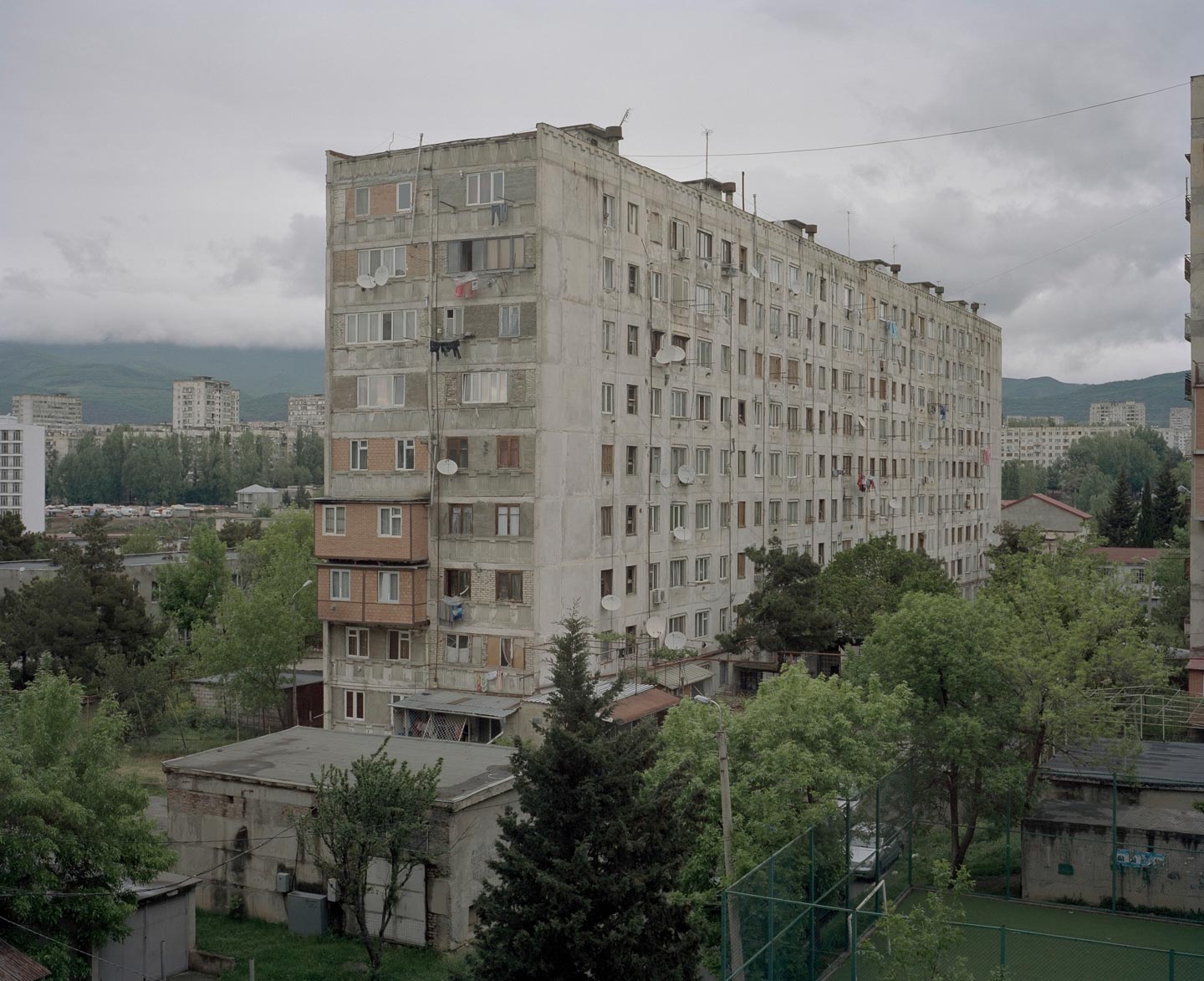 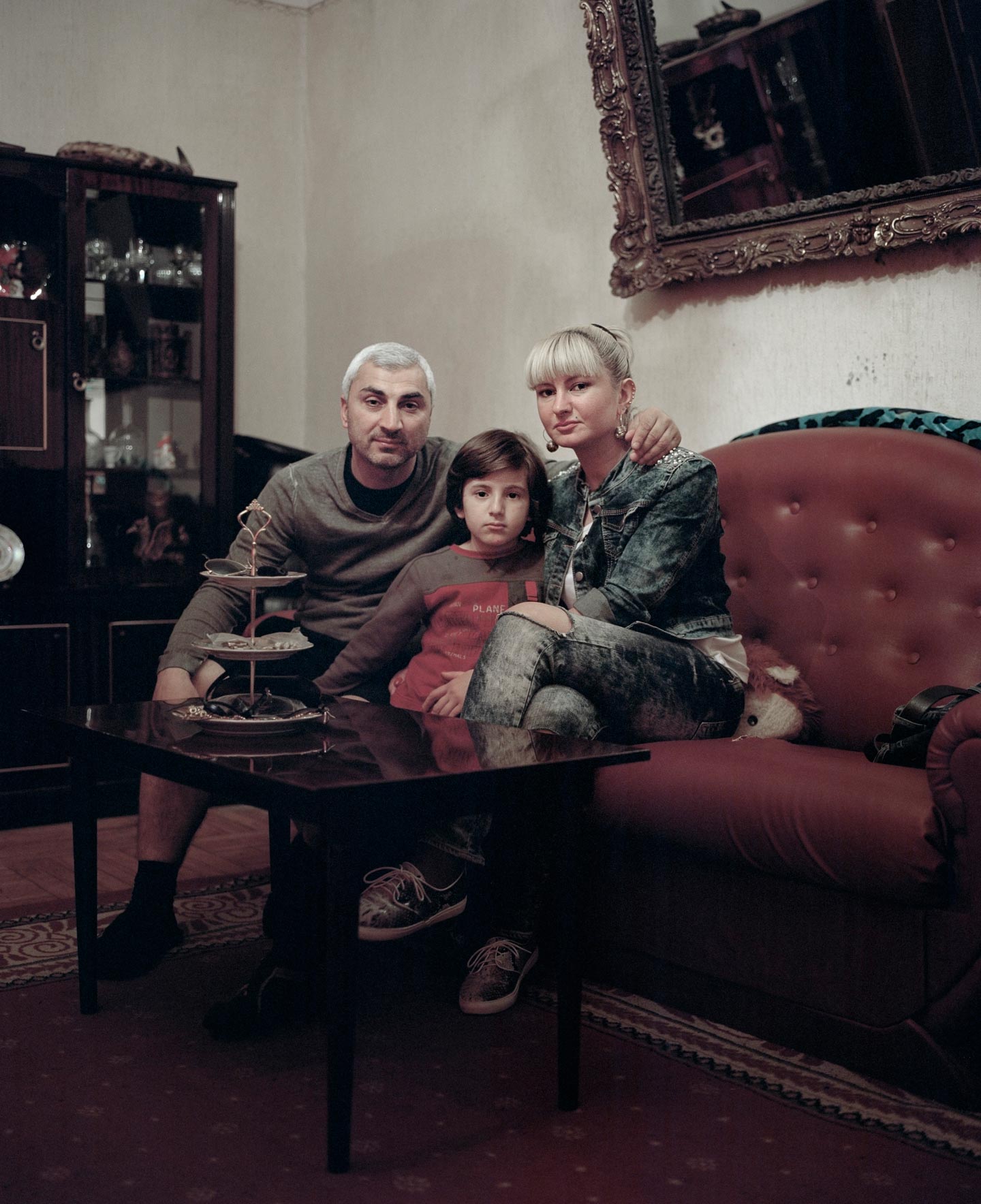 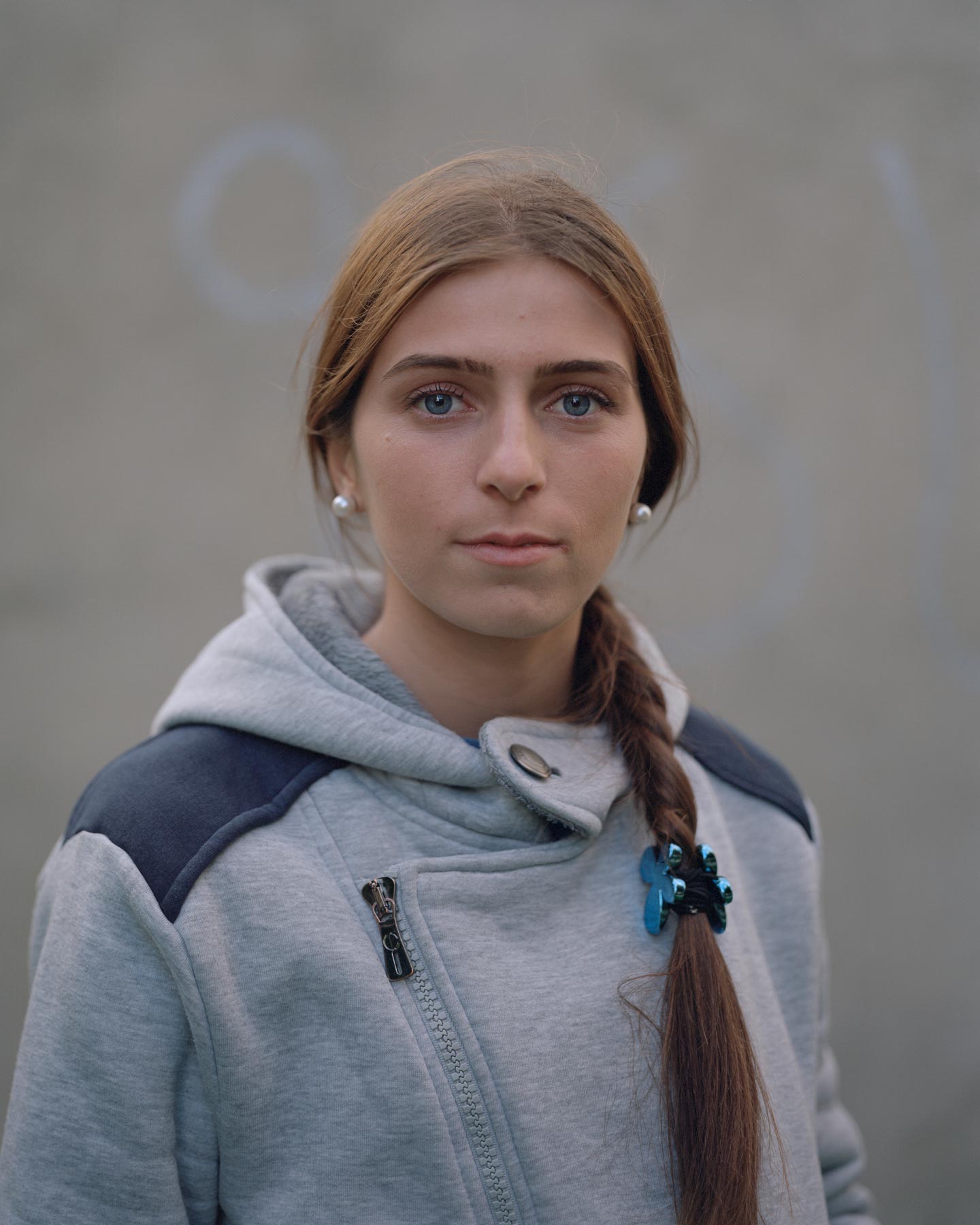 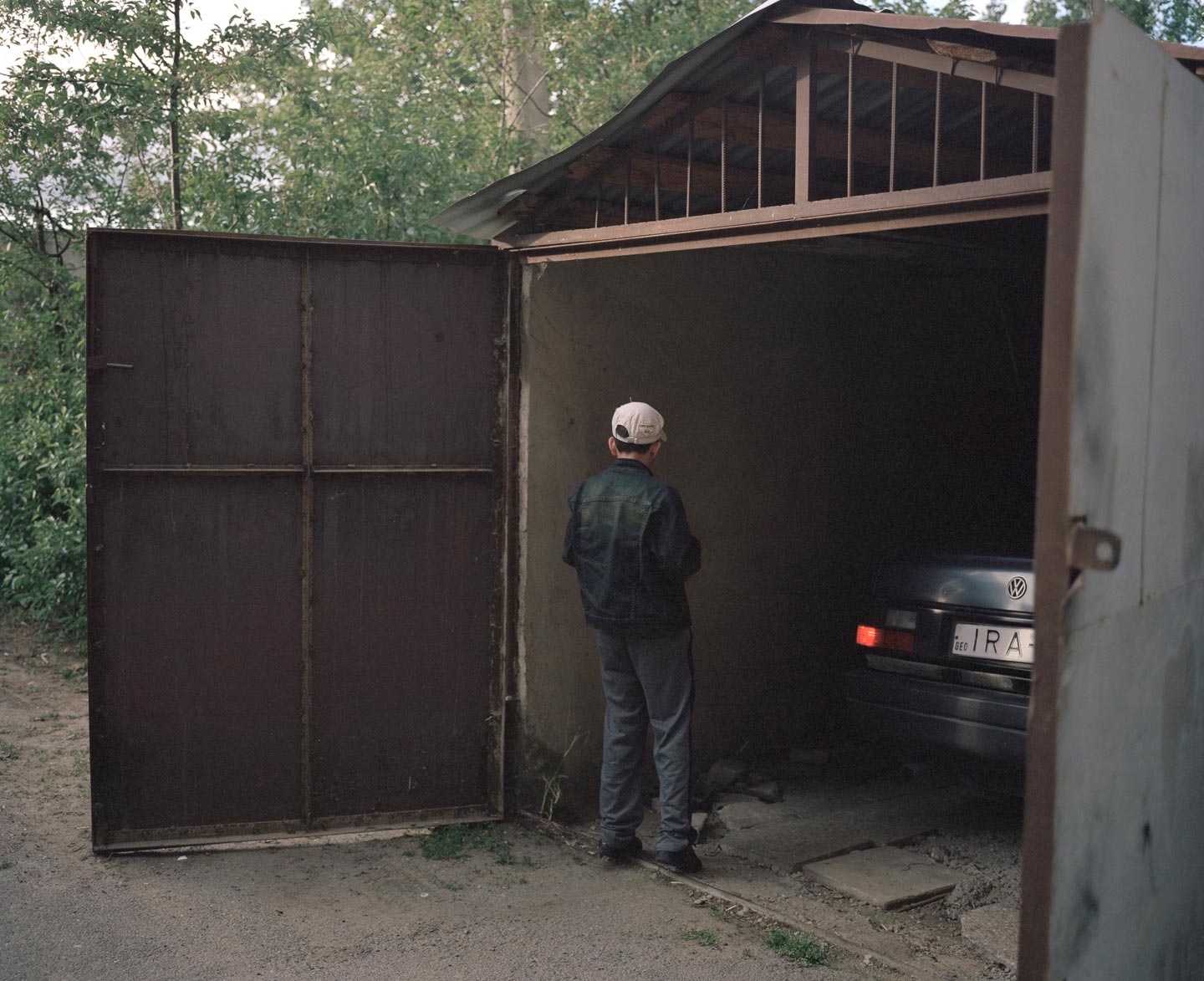 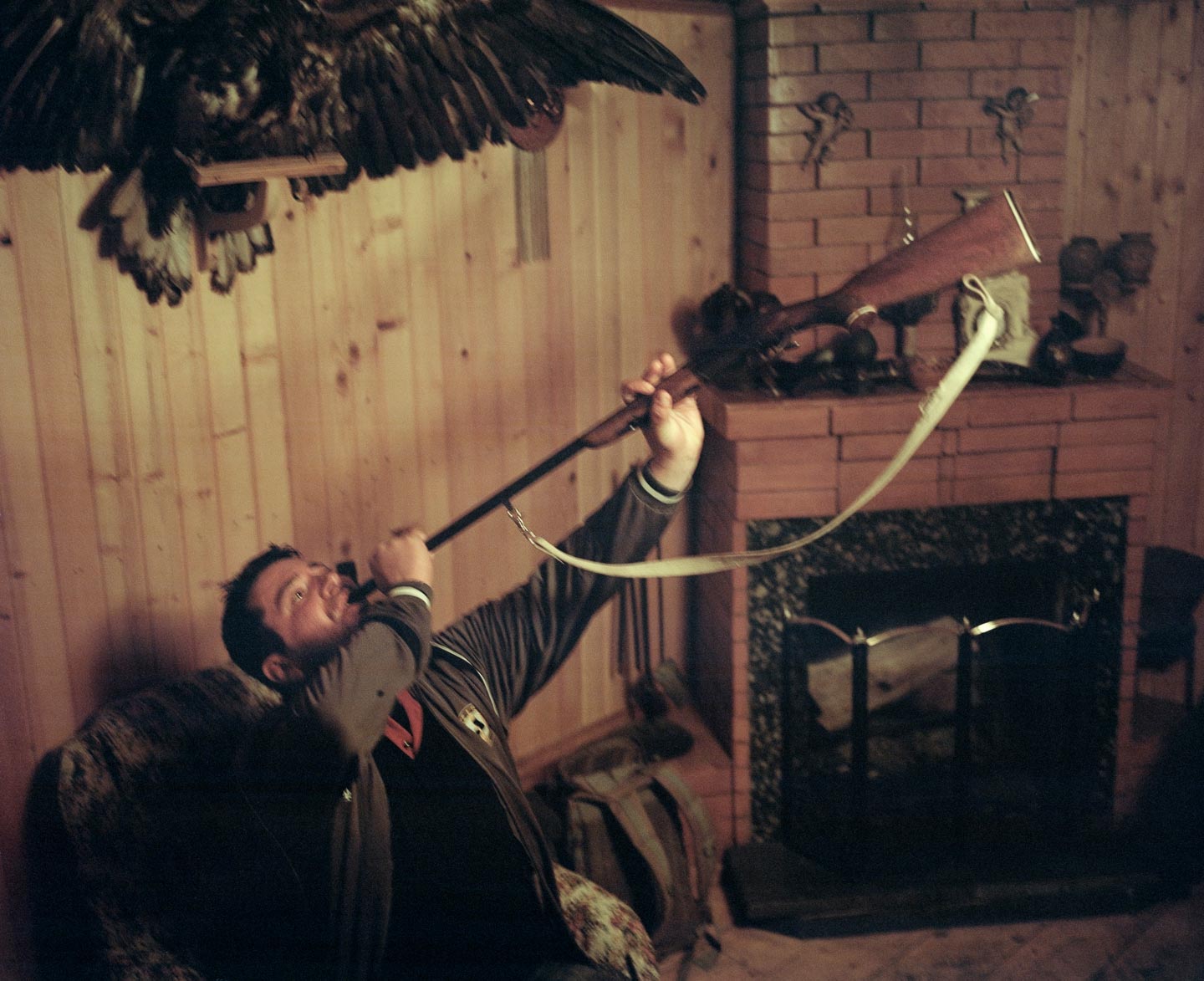 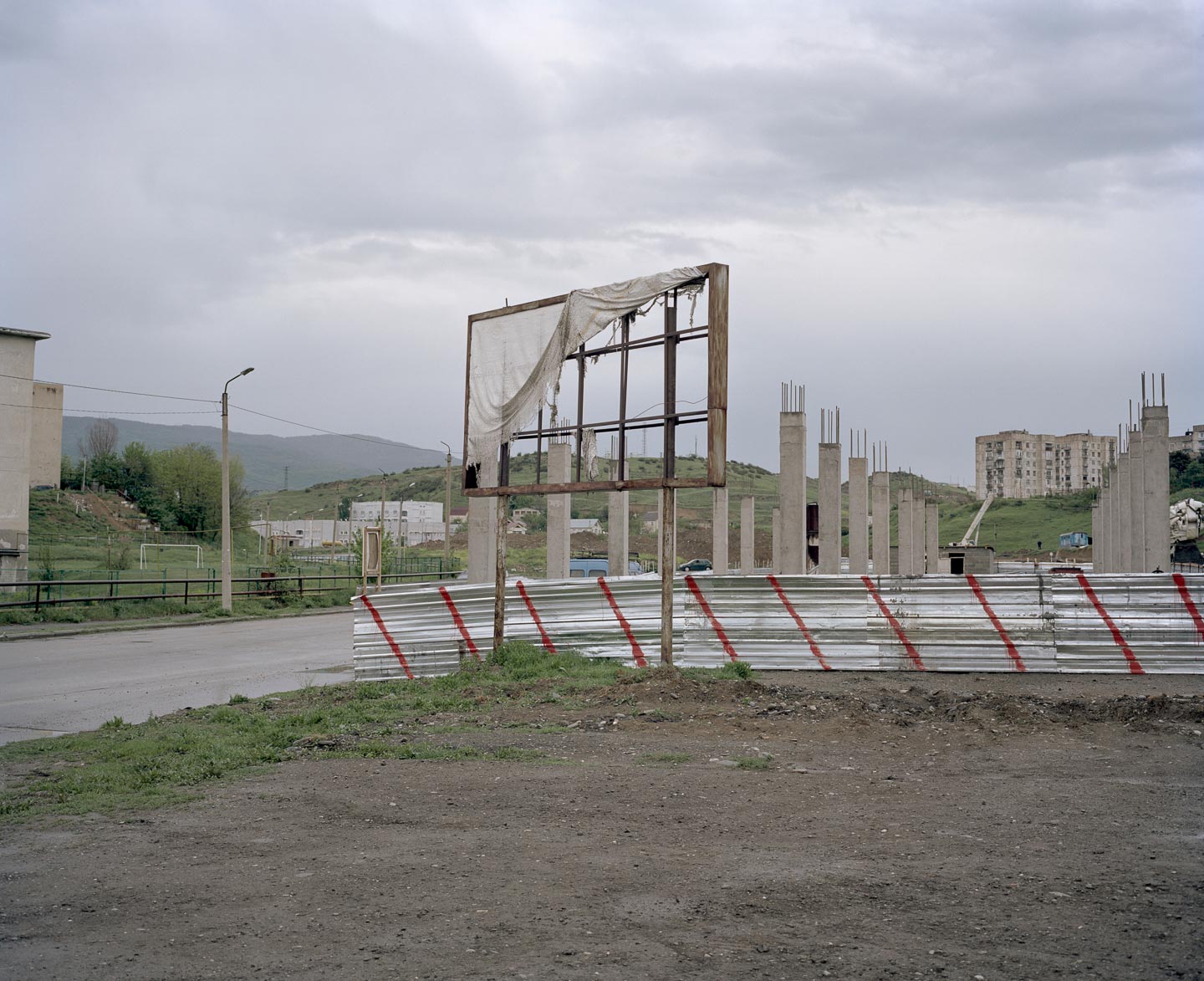 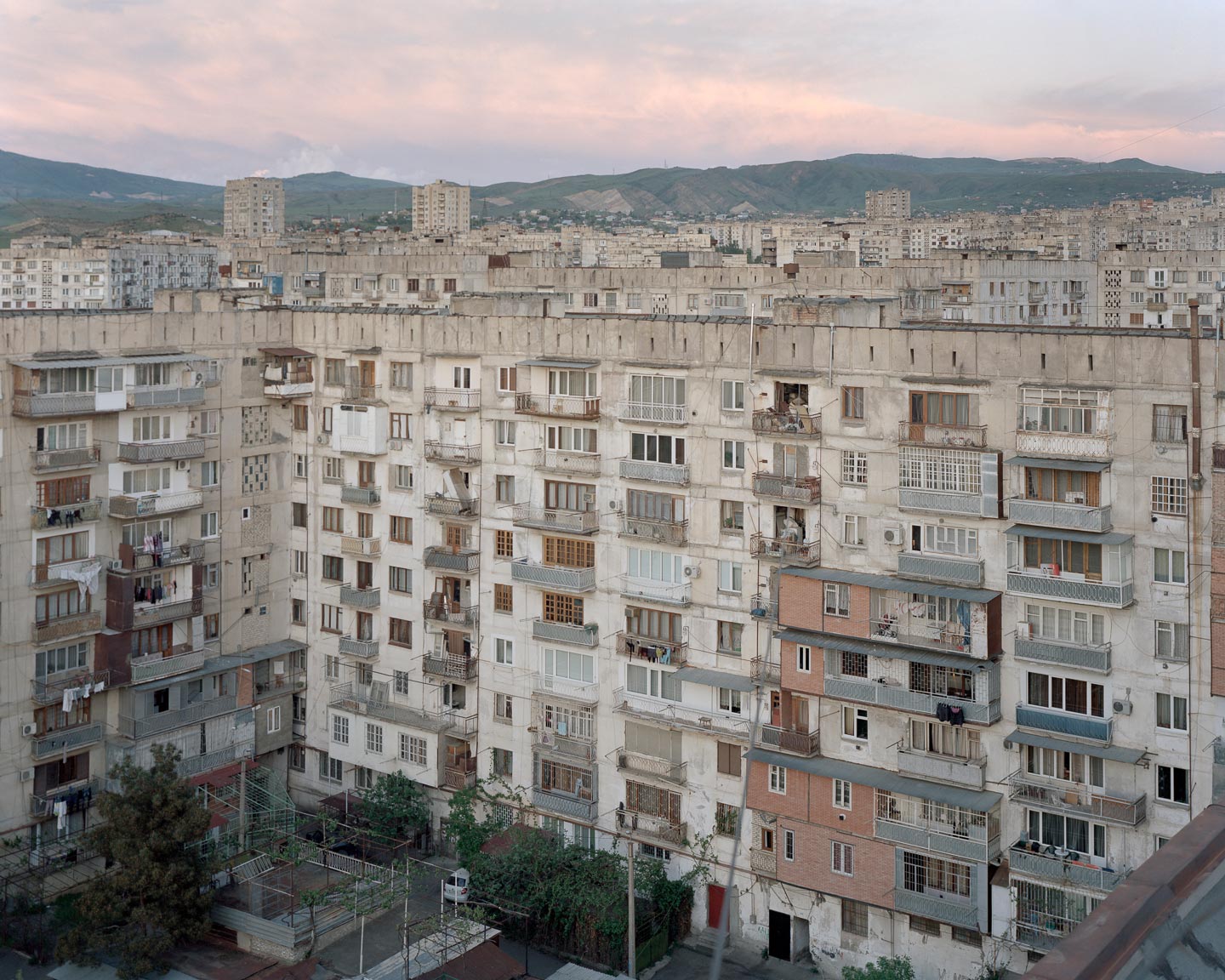 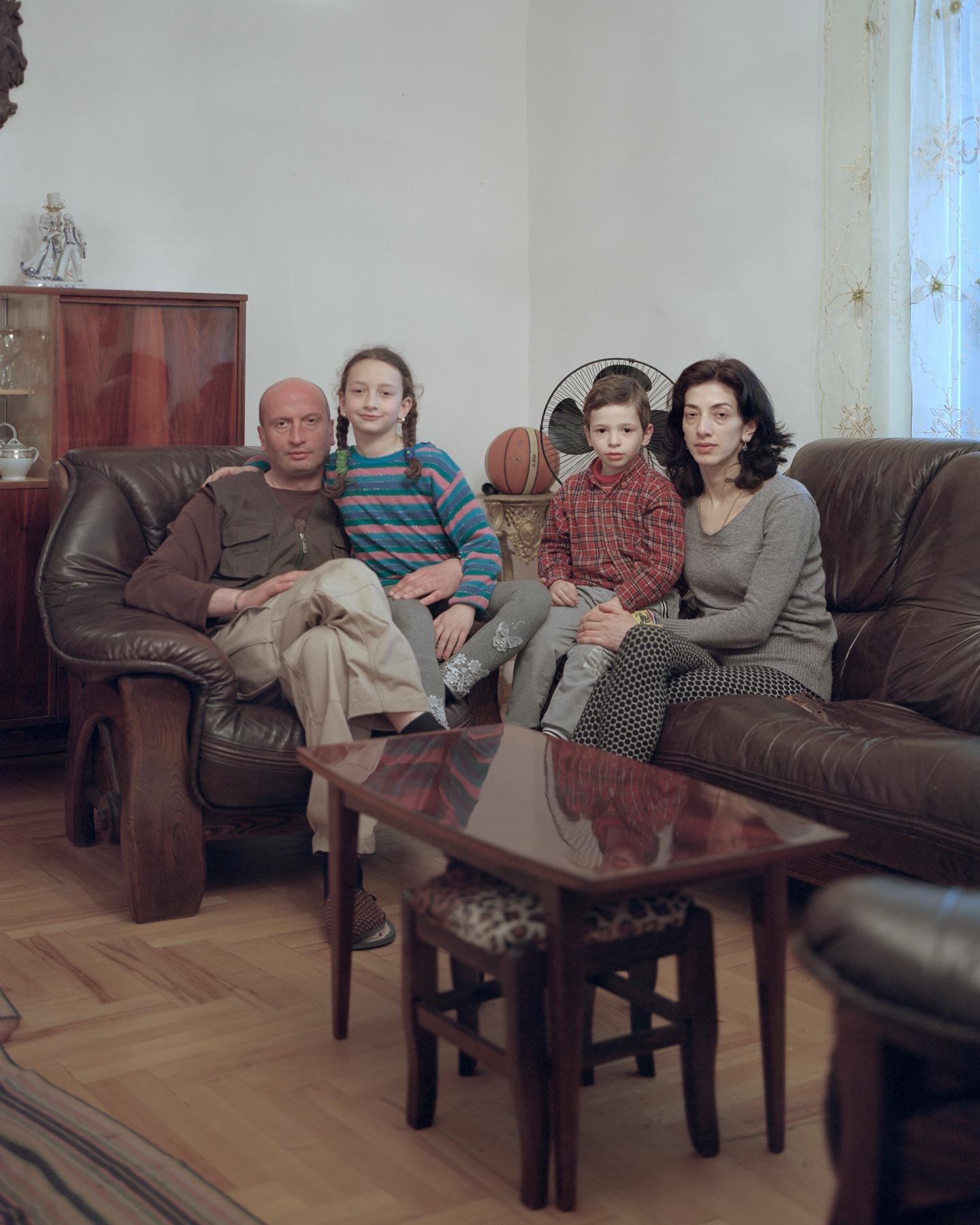 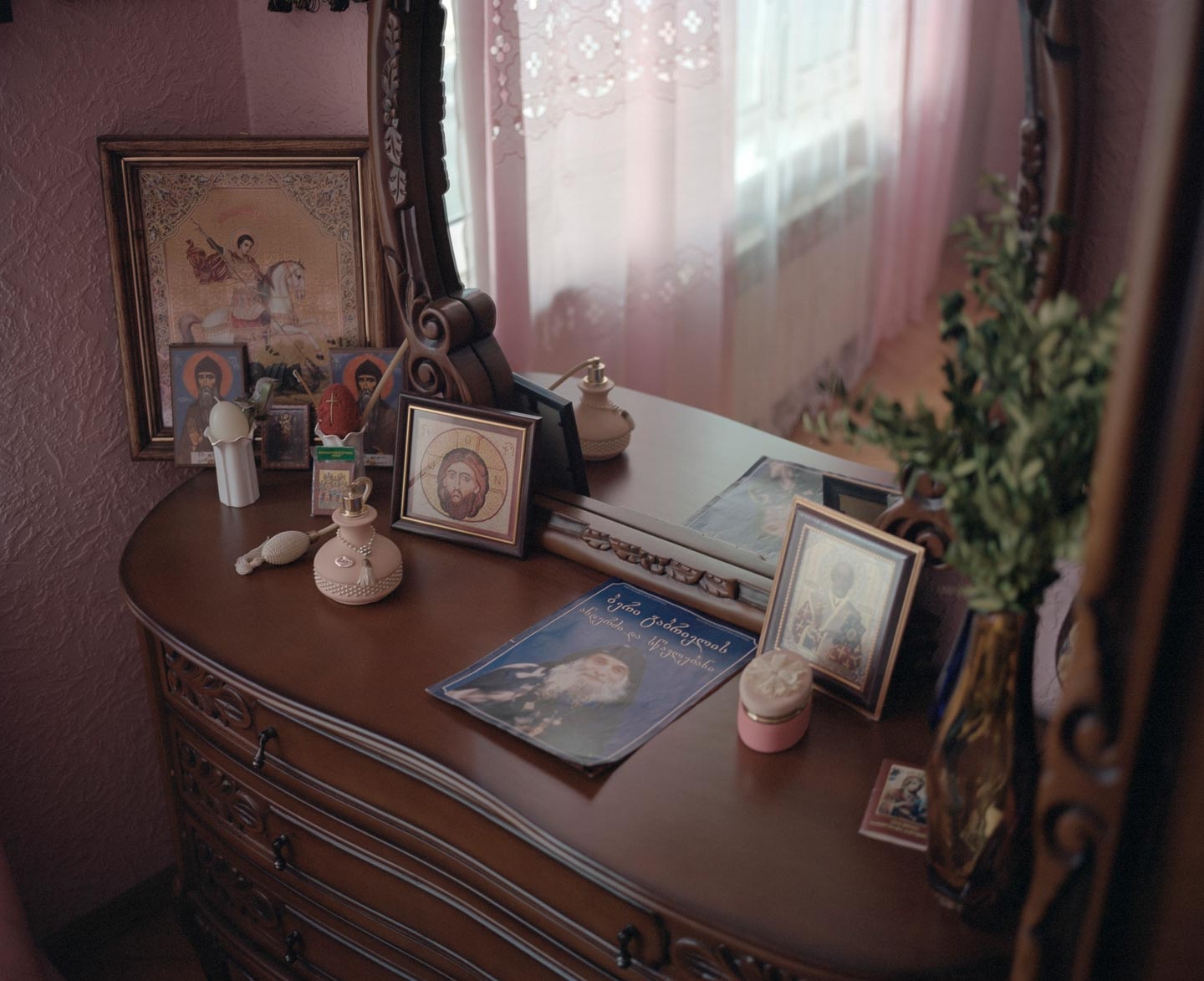 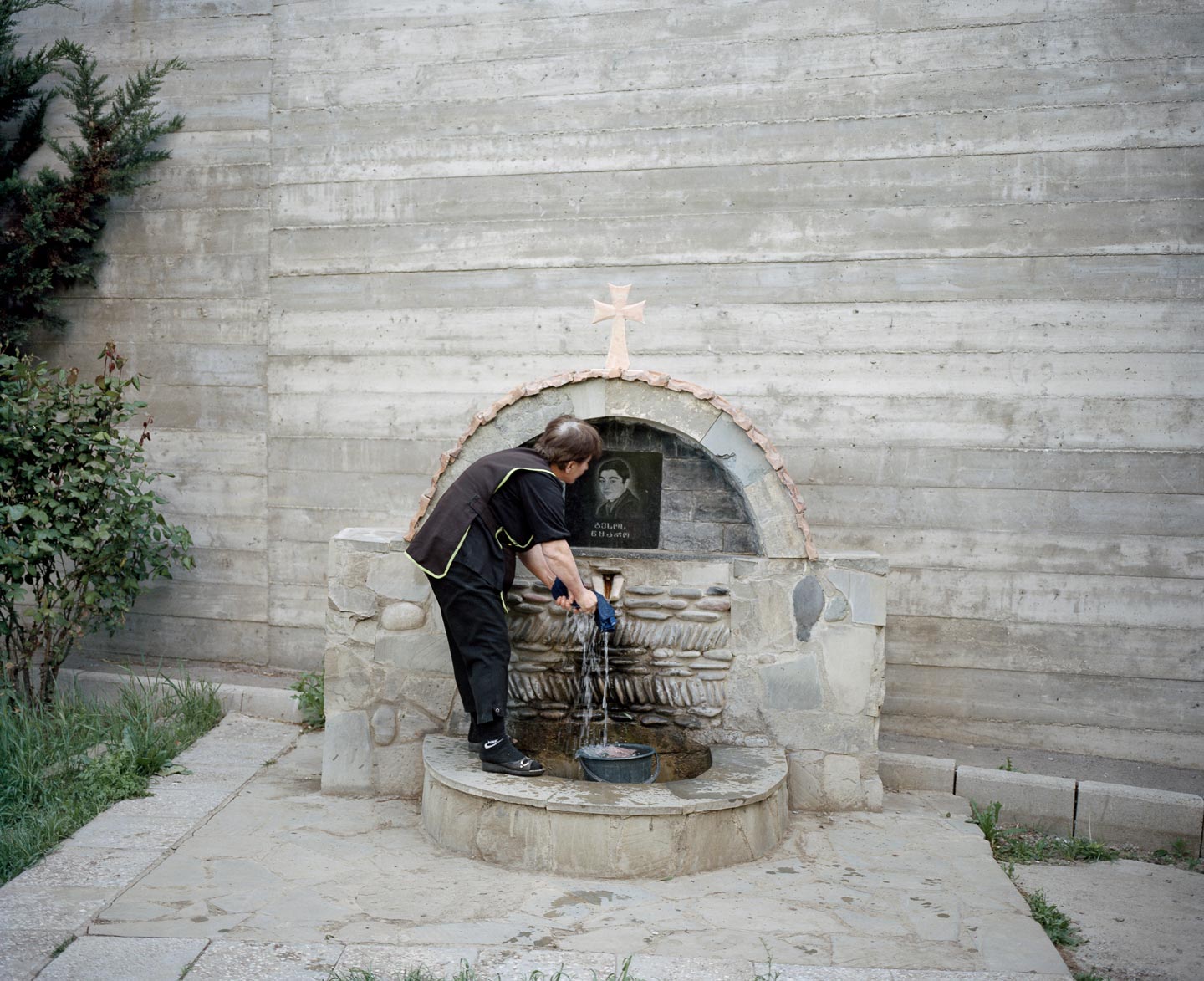 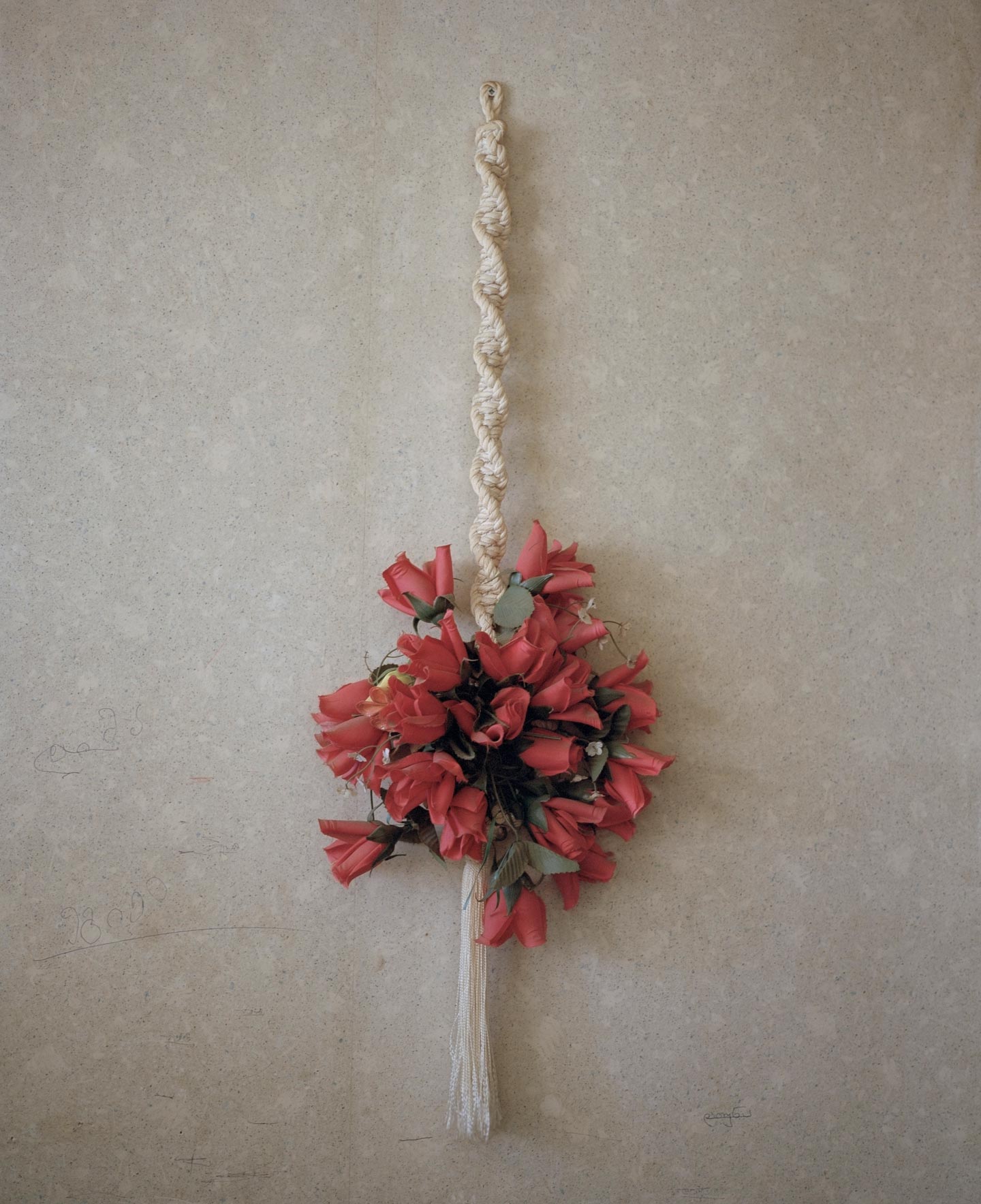 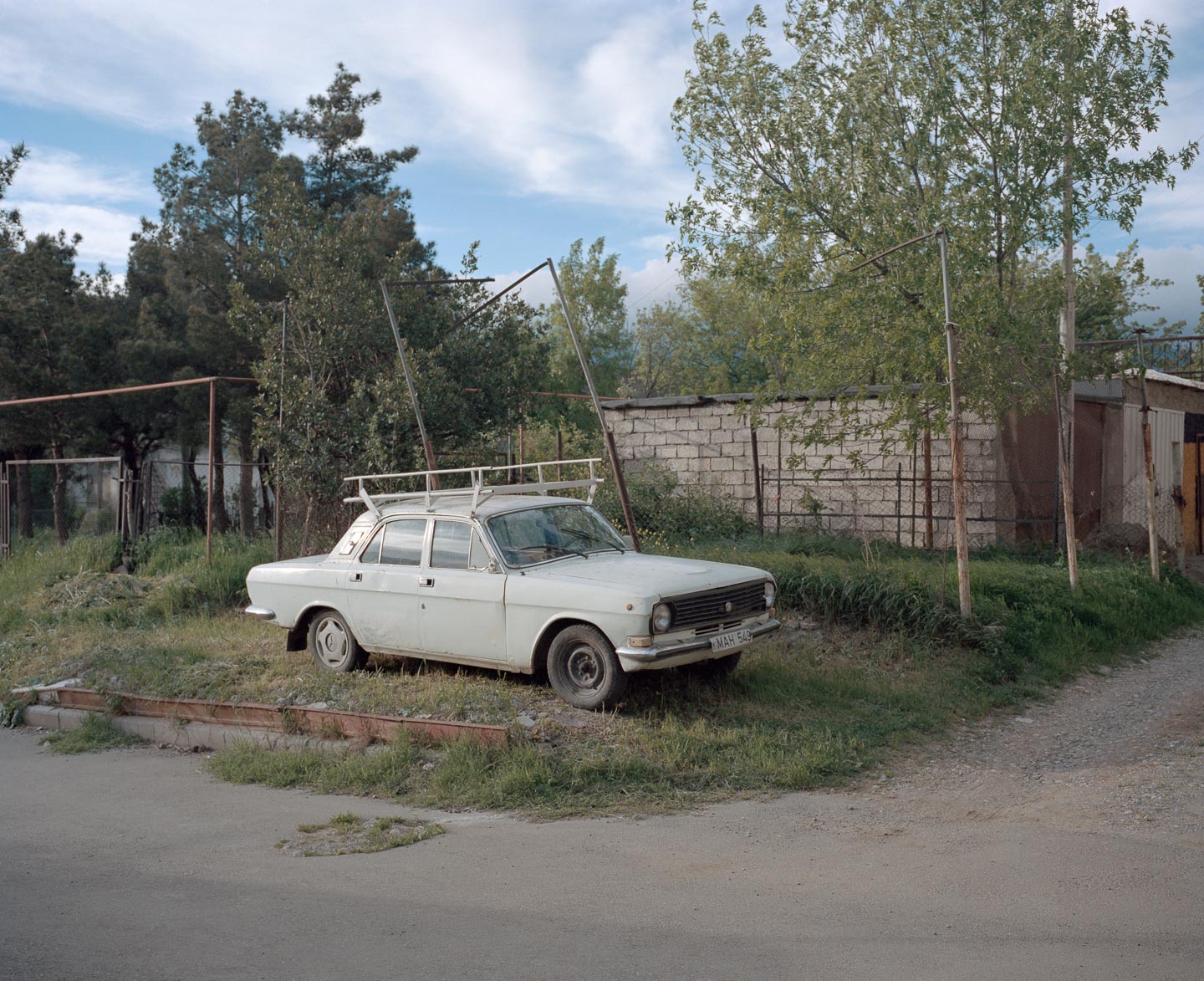 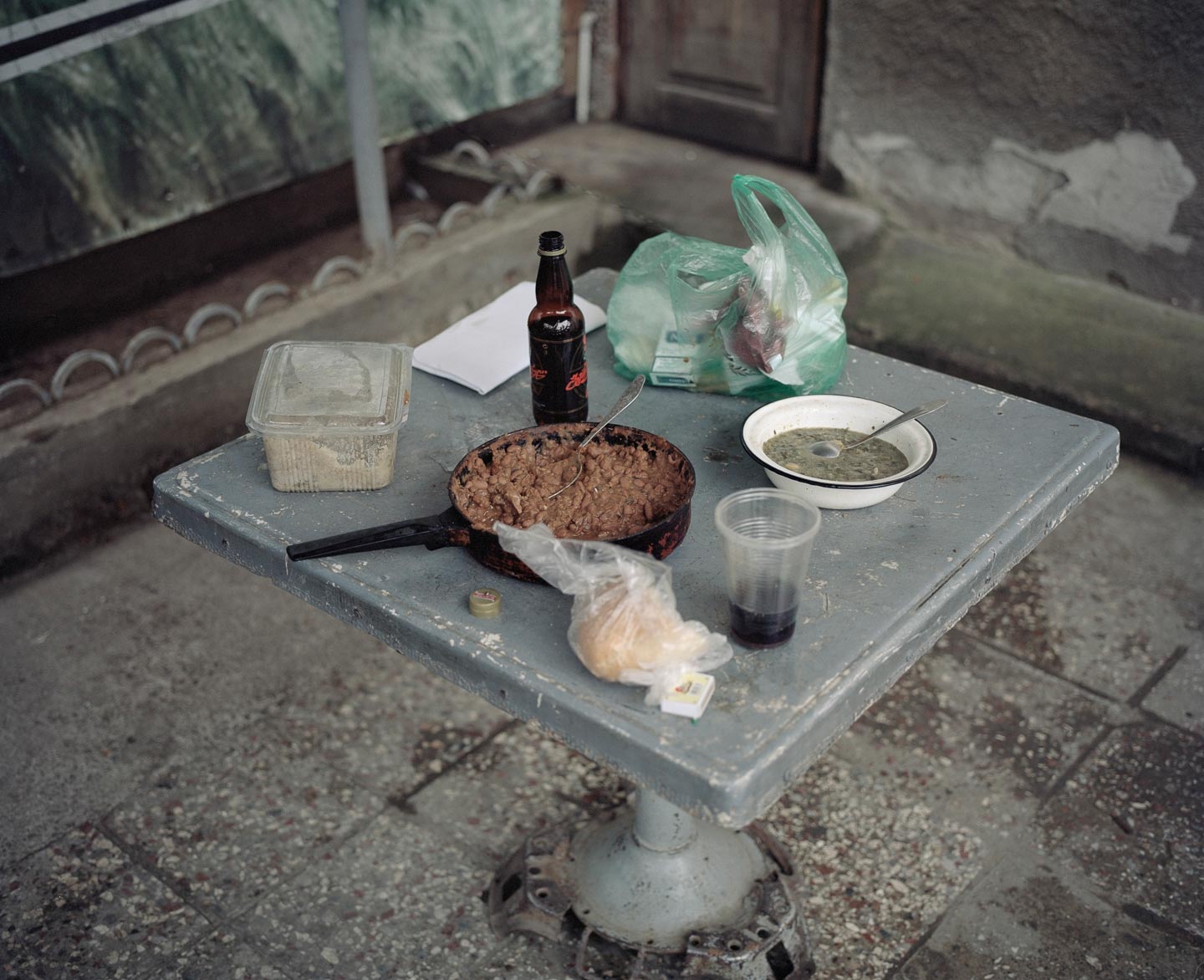 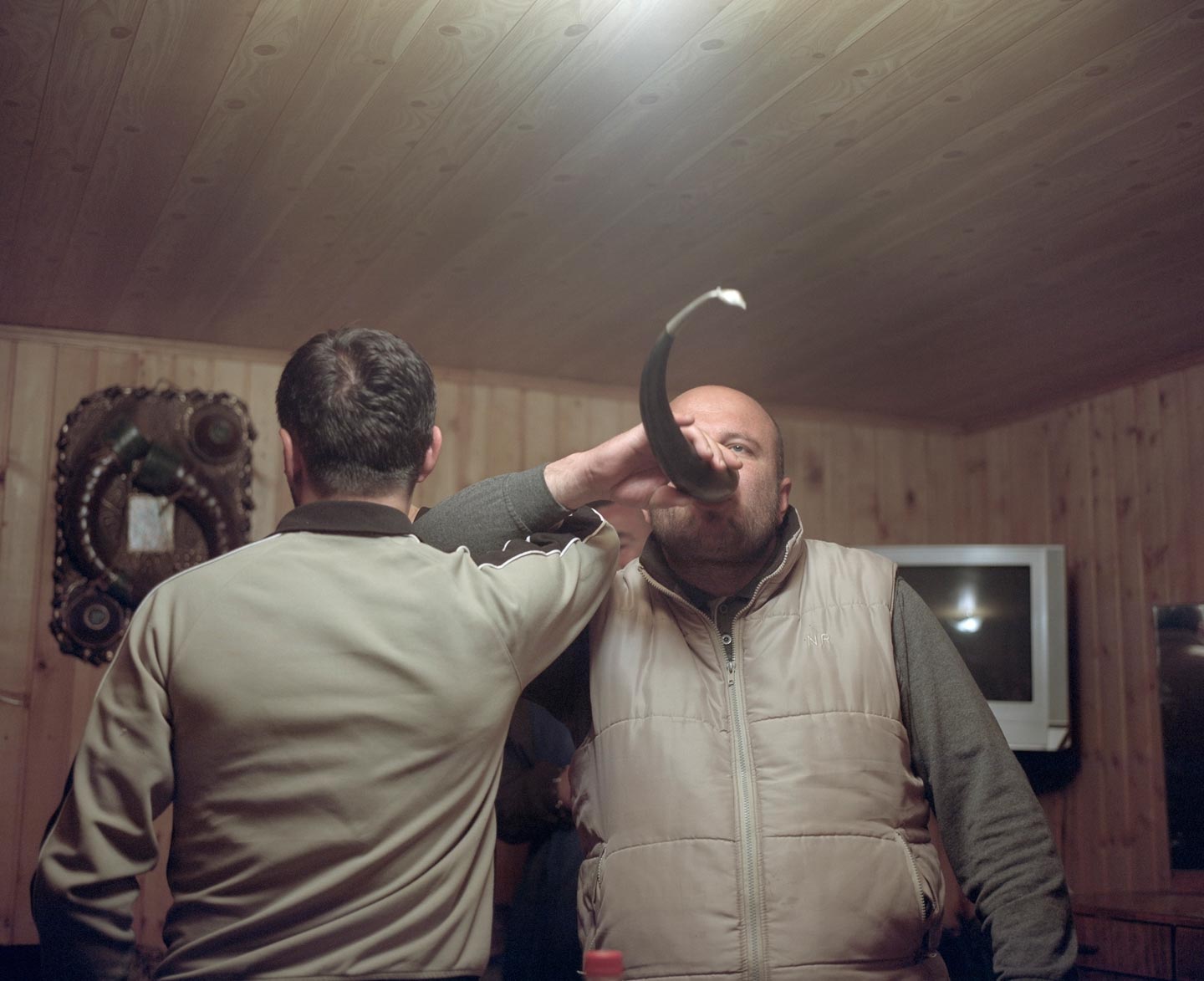 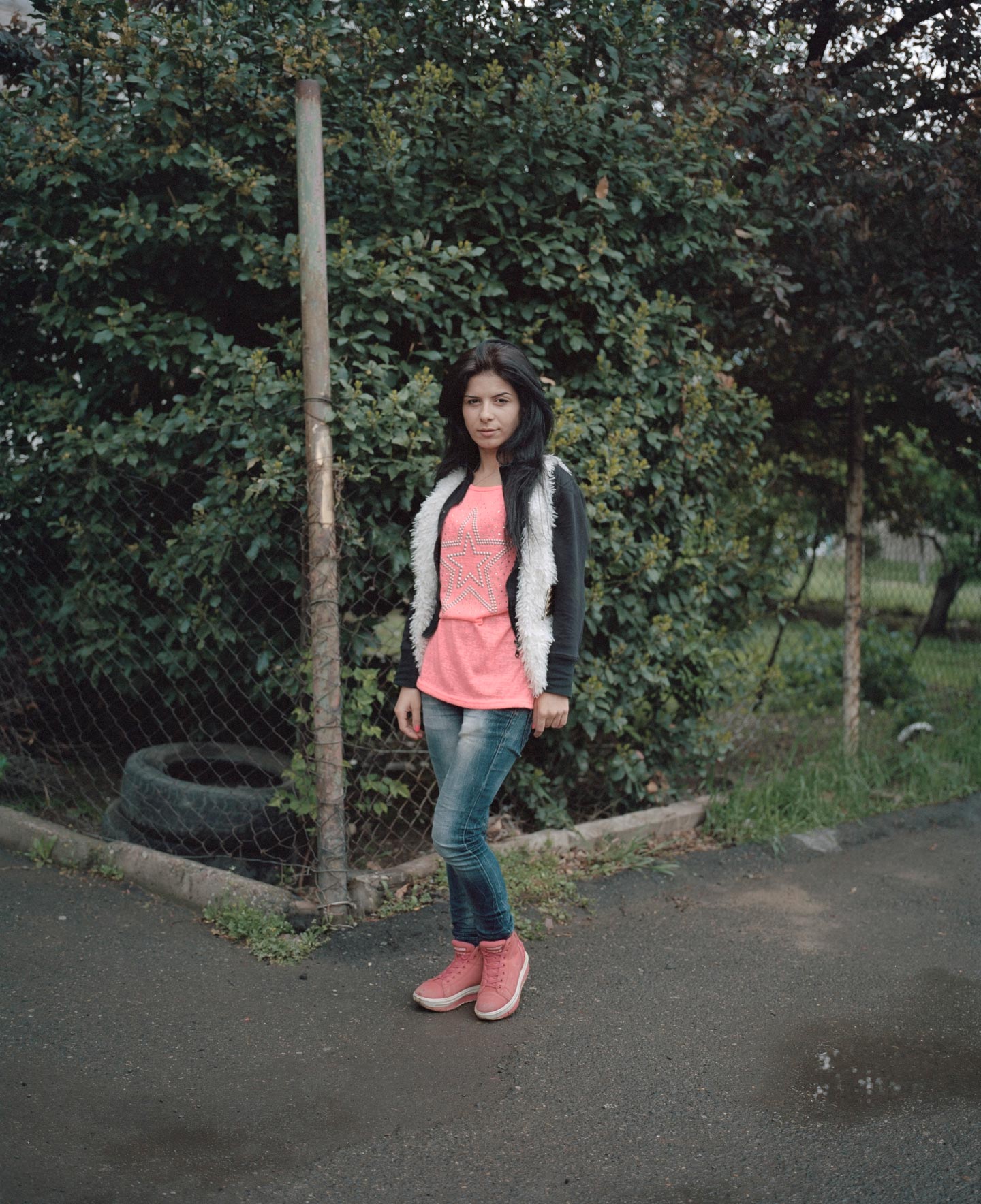 Mukhiani is a suburban district on the outskirts of Tbilisi, Georgia, where Tbilisians rarely go. It’s not a nice place, as the people who live there are quick to acknowledge: you live in Mukhiani when you can’t afford anything better. But when 27 year-old German photographer Felix von der Osten ended up in Mukhiani one afternoon, he found hospitality, friendship and a strong sense of community, so much so he decided to return to be with his new friends and to make a subjective reportage that captures the daily life of Mukhiani’s working class.

My main interest is to explore places or themes that I am curious about. After choosing a certain location, I let my intuition guide me. My photographs are often the result of what I experienced, or the encounters I had. I get involved in the story—I don’t like to be the fly on the wall.

My goal is to capture a mood in my photographs that speaks about the depicted scene in a deep way; to take images that draw the viewers in and make them see how it felt to be there. I prefer slow and meditative photographs over images that are too obvious.

What kind of place is Mukhiani?

Mukhiani is a micro-district outside of Tbilisi, Georgia, mostly consisting of these greyish, Soviet-style buildings constructed to accommodate a large number of people. The valley in which it’s located used to be covered in oak trees—’mukha’ is the Georgian word for ‘oak’, which explains the district’s name.

The deforestation of the valley started in the 1970s. The place was first used by the Soviets as a military base, but was later transformed into a small settlement. More residential buildings were constructed in the 1980s, which led to the formation of a highly populated micro-region: Mukhiani is sort of like a city inside the city. The people of Tbilisi never go to Mukhiani, in fact many were surprised that I wanted to visit it. Similarly, the residents of Mukhiani rarely leave the neighborhood, as they have everything they need in their small cosmos. Those old grey buildings are home to generations of Georgians.

How does life look like for the people who live in Mukhiani?

Mukhiani is a working-class neighborhood. Big families spanning several generations often live together in small apartments. In many cases the children have to share their bedrooms with their grandparents or siblings, or their rooms are used differently during the day. Many residents are jobless and lack opportunities to improve their lives due to very poor economic conditions. Most of them settle in Mukhiani because it’s one of the few places that they can afford.

On the bright side, there’s a strong sense of community here. People know and are connected with each other. Soccer is a source of rivalry between the different complexes represented by the different teams; but all in all they stand together.

Why did you decide to make a project about Mukhiani, and for how long have you worked on it?

I literally stumbled upon this place during my first stay in Tbilisi in 2013. Back then I wanted to make work about Tbilisi’s metro system, with its old Soviet Union style wagons and stations; but it wasn’t really working for me. So I rode the subway to the last stop outside of Tbilisi and got off to wander around. From afar I saw these giant, sand-colored, concrete structures, and I instantly wanted to discover more about them.

People soon noticed me as I walked around—perhaps I looked a bit out of place. But they were very friendly and invited me to a birthday party. It was a wonderful afternoon with a lot of wine and moonshine [a type of home-made whiskey]. I took many snapshots of my new friends.

The next day I went back home to Germany; when I returned to Georgia two years later, it came natural to me to visit Mukhiani again and make it the subject of a body of work. I went back with prints of the pictures I’d taken at that birthday party, and everyone really appreciated it and started opening their doors to me. I visited as much as I could and even brought a few German friends there just to hang out and have a good time (the people of Mukhiani know how to party!). Everyone treated us like friends. Georgians in general are extremely generous with travelers/outsiders: whatever their story is, they always offer their guests the best food and drinks they have. They want foreigners to think of Georgia as a nice and hospitable place, and I can confirm that it is.

What do the residents of Mukhiani think about living in the district?

They’re aware that they don’t live in the nicest place in Georgia, in fact in most cases they live there for a lack of a better option. But they created a micro-society with rules that they know and stick by. For example, when the Georgians celebrate there’s a man, the ‘tamada’, who is usually the oldest man at a table and the only one who can make a toast. In Mukhiani, the tamada is an important figure also in everyday life, not just on festive occasions—he is like a teacher or advisor. Mukhiani is home to a “sworn” community of friends ready to help each other out when someone is in need.

How would you describe your approach to the project? What did you want your images to communicate?

I know I didn’t want to show the bad conditions endured by some of the people who live in Mukhiani. I’m not interested in showing the obvious. I like creating a mood that flows through my photographs, in the hopes of making the viewer curious enough to raise questions and connect the dots for themselves. In my opinion, showing the subtleties of a certain reality is way harder than just focusing on its negative sides. I don’t want to document anything, I want to follow my own curiosities and offer my own insight into a place and its community.

Did you have any specific references or sources of inspiration in mind while working on Mukhiani?

This was the first time that I shot 4×5” large-format film within the boundaries of a project, so of course I had in mind the works of some photographers I admire who shoot 4×5” or even 8×10”. Other than that it was all about living in the moment with the people in Mukhiani. There was no pressure, no one was expecting anything from me, except myself. That gave me the comfort to try whatever I wanted.

How do you hope viewers react to these photographs, ideally?

I hope to make them think. They don’t have to understand everything about Mukhiani, but maybe they’ll feel it.

My main influence in photography was for sure my year at the Danish School of Media and journalism. I was pushed outside of my comfort zone on an interstellar level and was made to get involved with my subjects. One of the most important quotes I still remember was from our teacher Mads Greve: “Don’t show what people do. Show what people feel.” You have to get involved to do that, on a level where you reach mutual trust. For me, that means being with your subjects, living and eating with them, even helping them in any way you can. Cook for them or wash their dishes. Put your camera down and be a normal person. That is how you will get close to the people you photograph. You will have memories to share.

I couldn’t name all the people I get daily inspiration from—this is why I keep a blog of only photographs I like, images that speak to me in some way. But to make a few names: Alec Soth, Bryan Schutmaat, Dana Lixenberg, Pieter Hugo, Rob Hornstra, Hannah Modigh, Jack Latham, Todd Hido.