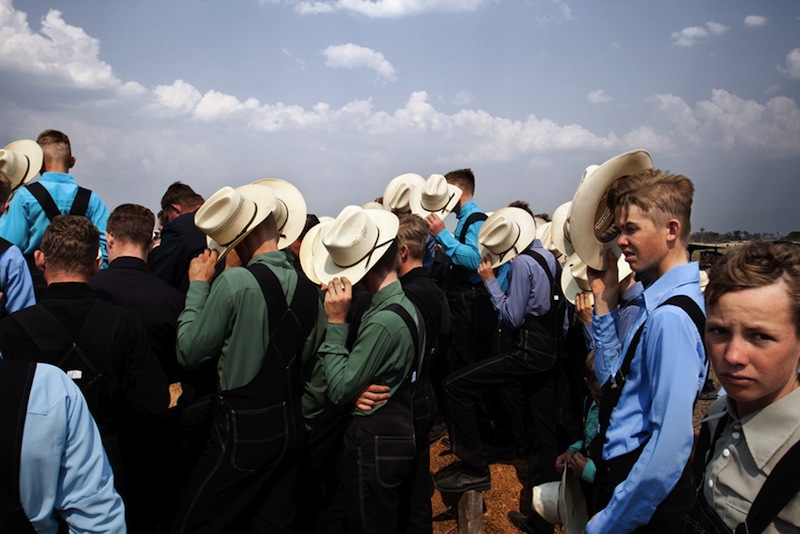 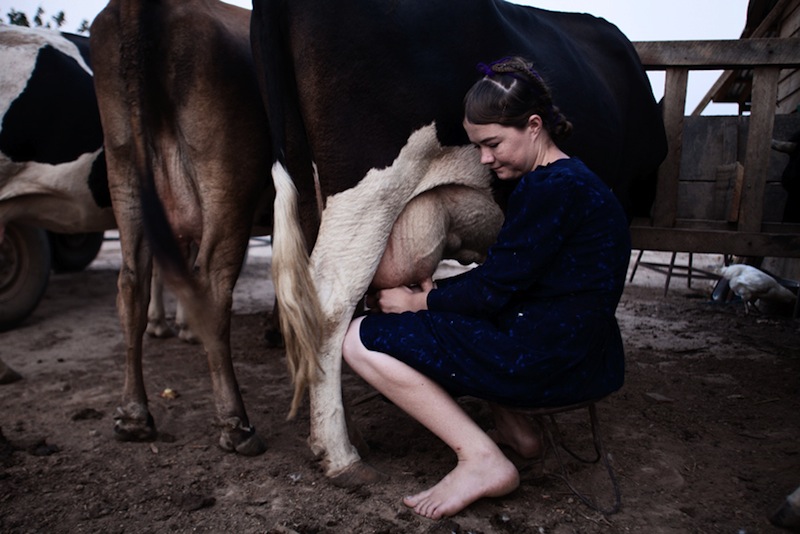 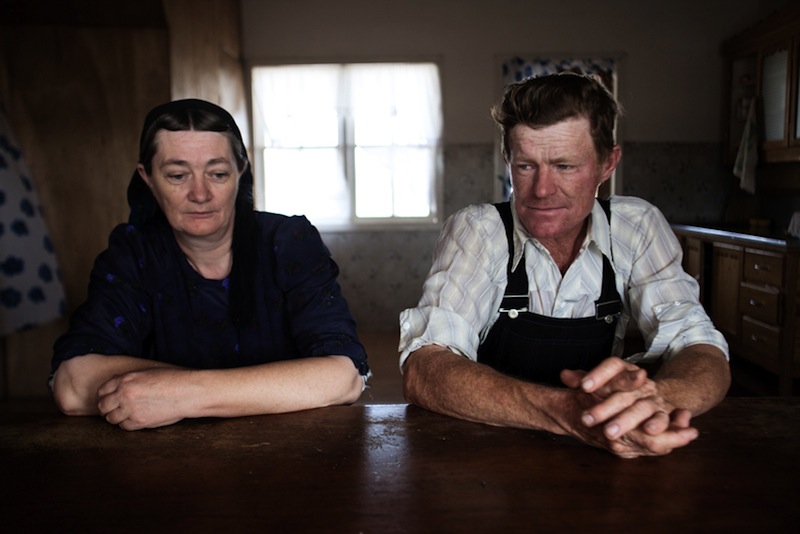 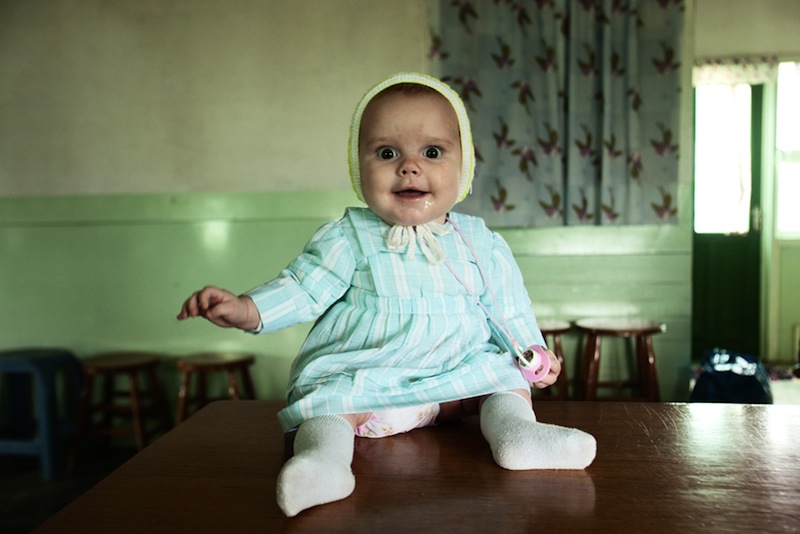 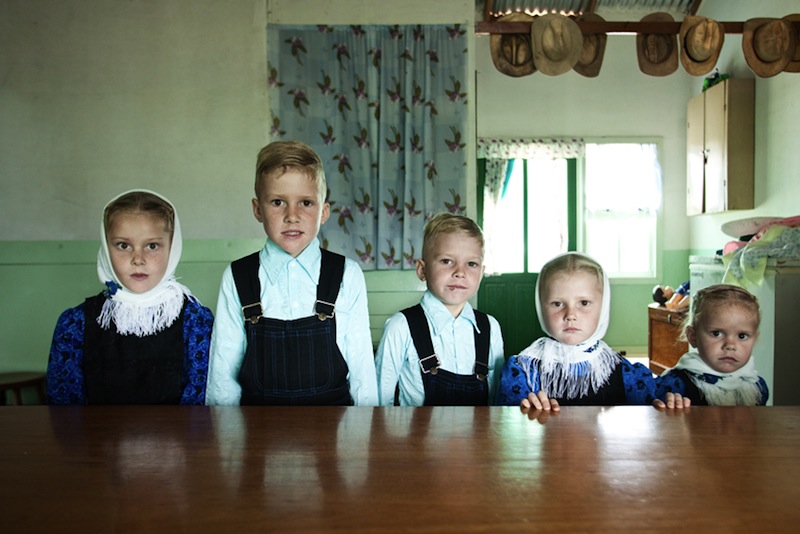 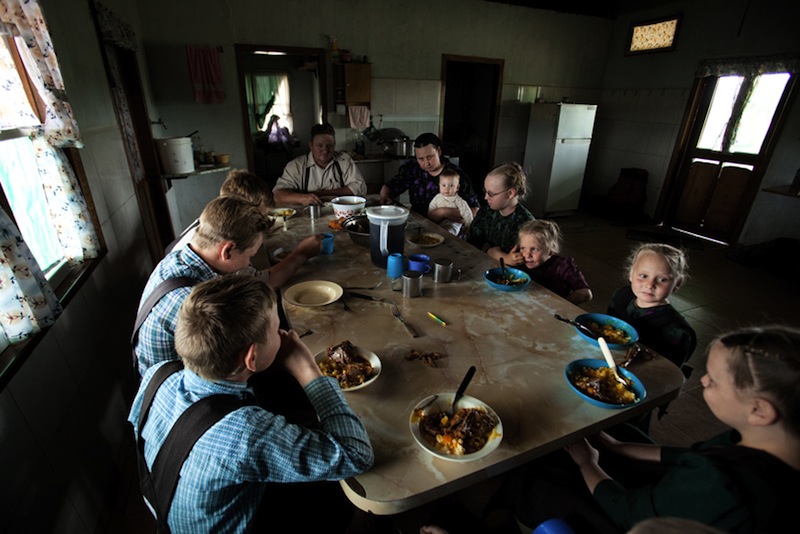 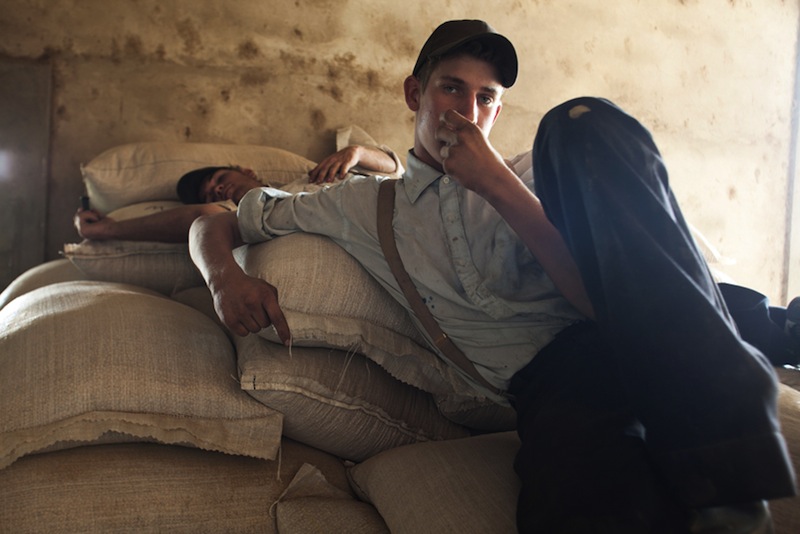 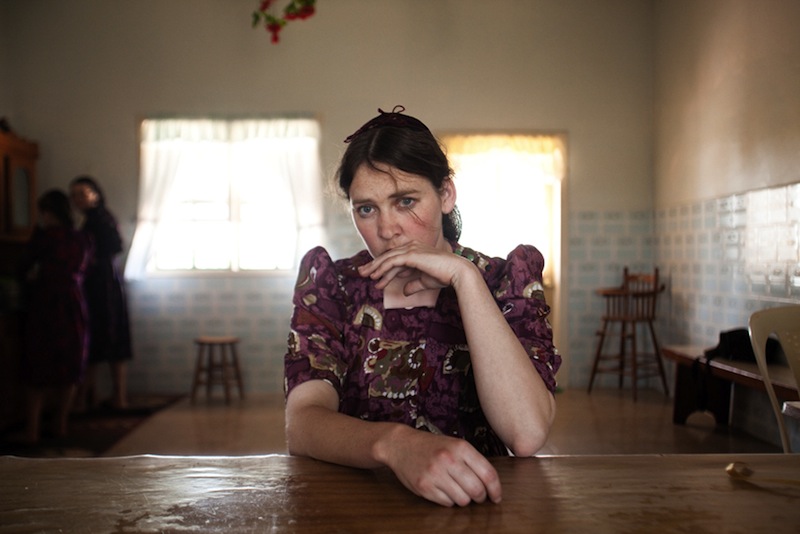 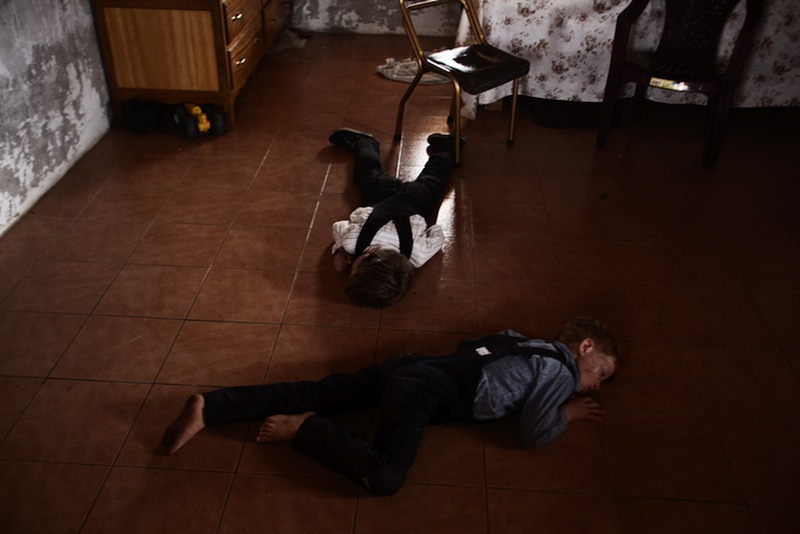 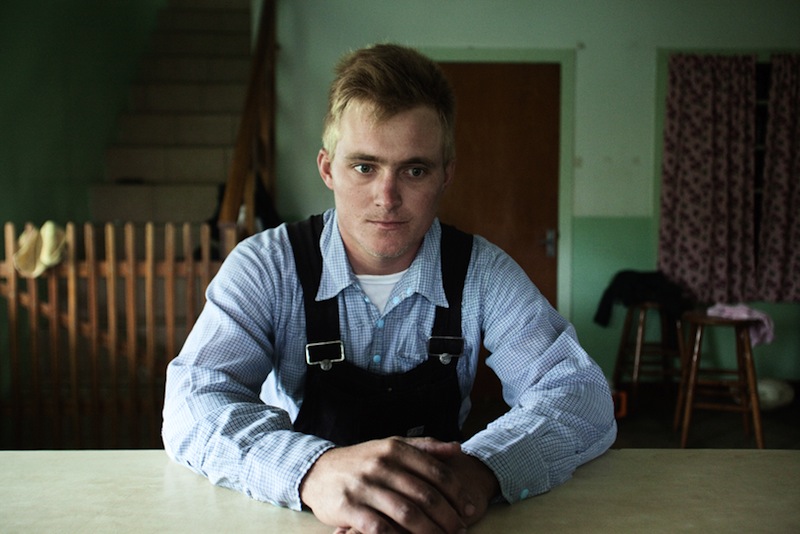 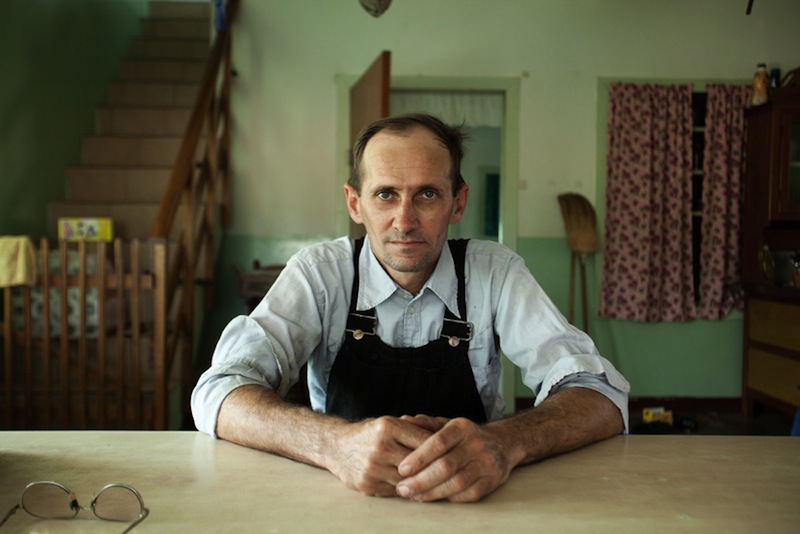 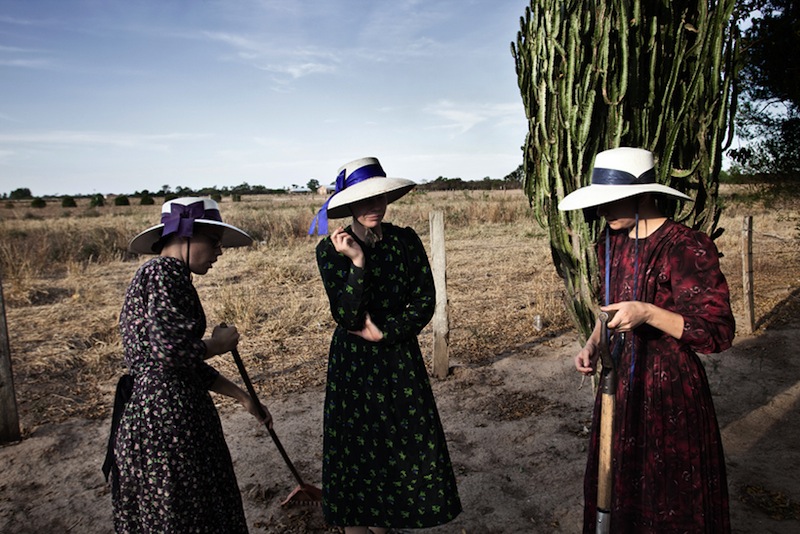 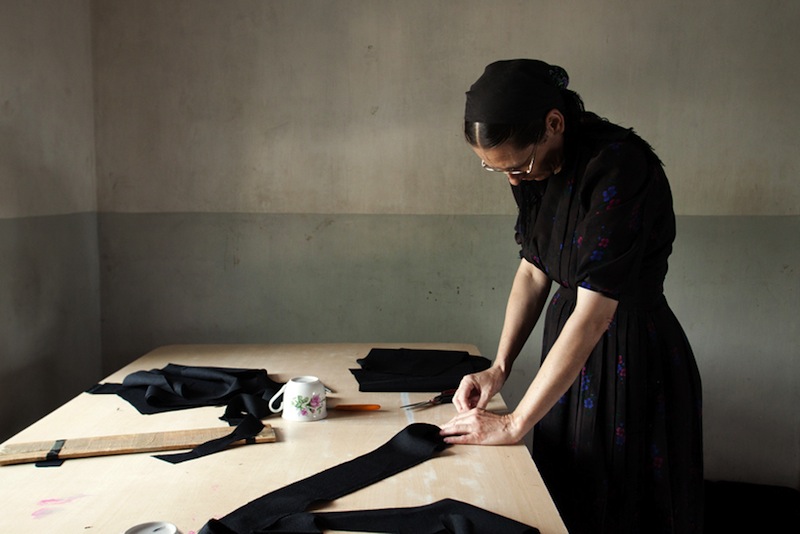 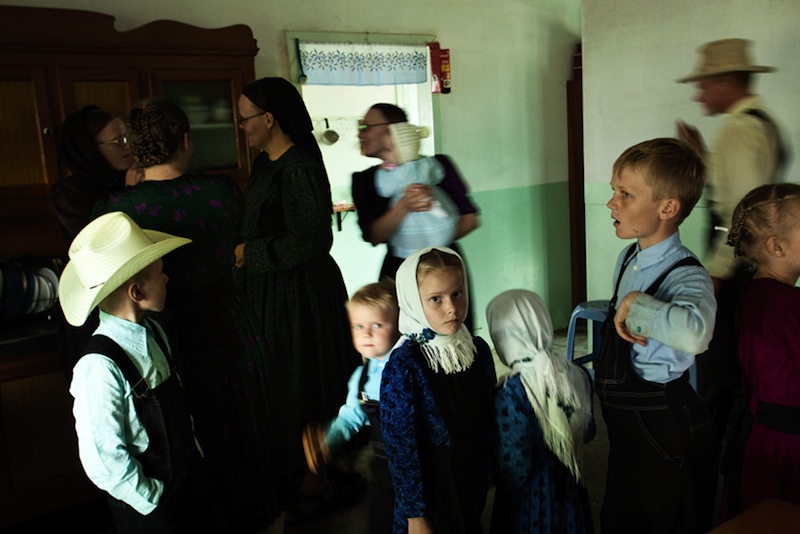 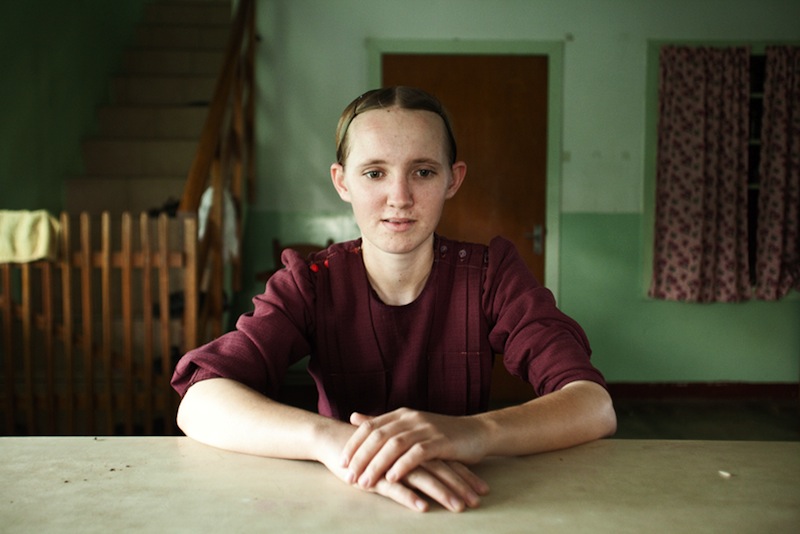 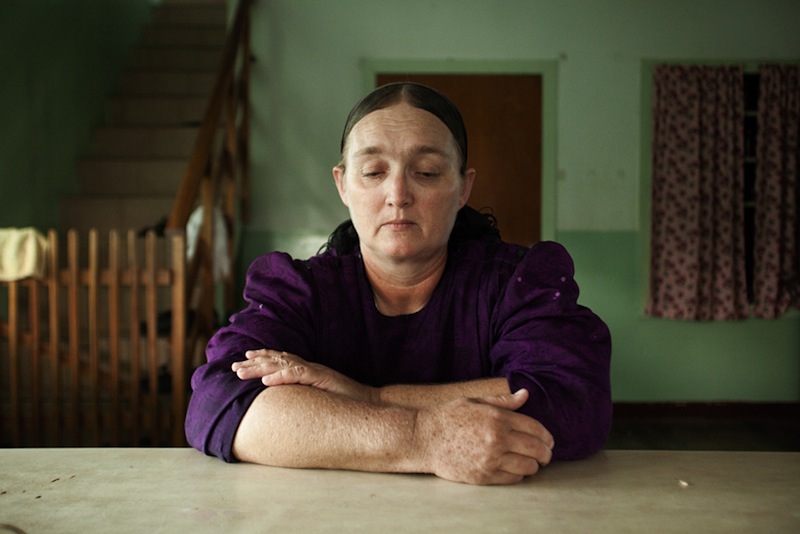 Spanish photographer Jordi Ruiz Cirera exhibited his project Los Menonos at Fotogalleri Vasli Souza in 2015. The series portrays a community of Mennonites, a Christian group present all over the world—the community photographed by Jordi resides in Bolivia—whose members reject modernity based on religious beliefs. “Mennonites live as their ancestors did, with no cars, TV, electricity, birth control, music or games: all this is banned by their religion,” Jordi explains. “The Mennonite belief has its core values in the refusal of modern machinery, non-violence, working the land, and a life devoted to God, so they maintain a very simple and humble lifestyle, and they like it that way. They wake up at dawn and work until dusk. Men work the land and the cattle, while women stay home with the kids, cooking and taking care of the farm.”

“Every colony has a religious authority (the ministers) and a civil one (the chiefs). The ministers are a few for each colony, they are chosen by the community and they have to commit to their role for the rest of their life. Basically, ministers rule the community: they decide whether something is allowed or not, and rule for the right application of the Mennonite law. If someone is going ‘the wrong way’, they are brought to the ministers, and eventually expelled. On the other hand, the chiefs are in charge of administering the community, and of the relations with the Bolivian authorities.”

As it turns out, photography is one of the things banned by Mennonite communities: “Yes, photography is considered to be modern technology, but this is not the only reason why it is banned. There is a commandment which forbids the production of graven images—something the Mennonites have in common with the Sunni Muslims, whose religion prohibits the reproduction of the full human image. According to anthropologist James Urrythere, moreover, photography may involve the sin of pride. However, as it happens everywhere around the world, people interpret their religion in their own way, so there were some people who told me that they could not be photographed because photography is forbidden, while others said they were not allowed to take pictures, but it was okay to have a photo of them taken by me. The portraits were especially difficult, mainly because they felt awkward with the idea of sitting in front of the camera and looking straight at it. They didn’t know how to behave or what to do. Each portrait session lasted less than a minute, I would normally take one or two pictures of each subject.”

Jordi decided to create Los Menonos because he was drawn to their secluded lifestyle: “A friend told me about them while I was in Argentina, and I couldn’t believe that someone was living in these days as if it were the 17th century. I wanted to know why and how, so I decided to go and visit them. I took two trips there, each one for about a month. I usually stayed 4 or 5 days with a family, living with them in their house, then I would move to the house of some of their relatives, always trying to choose houses where Spanish was spoken (Mennonites speak German with each other).”

Overall, Jordi feels that his subjects are content with their way of living: “Yes, I think they are. I had the impression that they have a sense of peace and of letting life happen that is difficult to find in other parts of the world, especially in the Western world. Nonetheless, there are of course some issues, and some people are unhappy with the restrictions and the way life is organized in the community.” This is particularly true for the younger members: “Like all young people in the world, some kids are drawn to what is forbidden, mainly drinking or listening to music. Of course, this creates strong confrontations amongst families, and later with the community ministers. Eventually some decide to leave or are expelled, in which case a completely new and different life awaits. You have to keep in mind that the Mennonites are completely removed from the local society: they don’t know much more than working the land, they don’t speak very good Spanish, and what’s more important, they live in an extremely closed environment, from which is very difficult to break away. Taking the decision of leaving family, friends and essentially everything you’ve ever known is a very difficult step.”