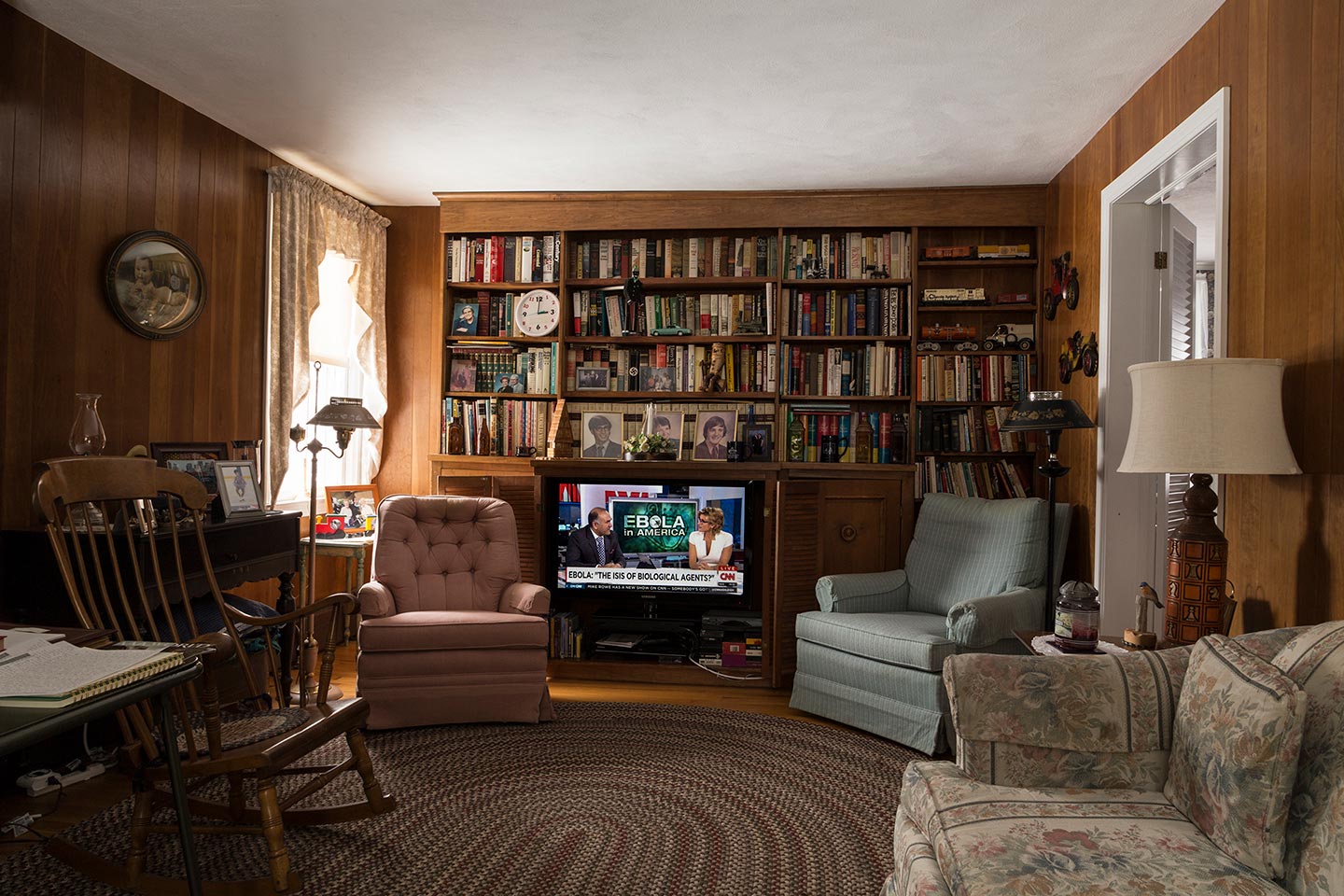 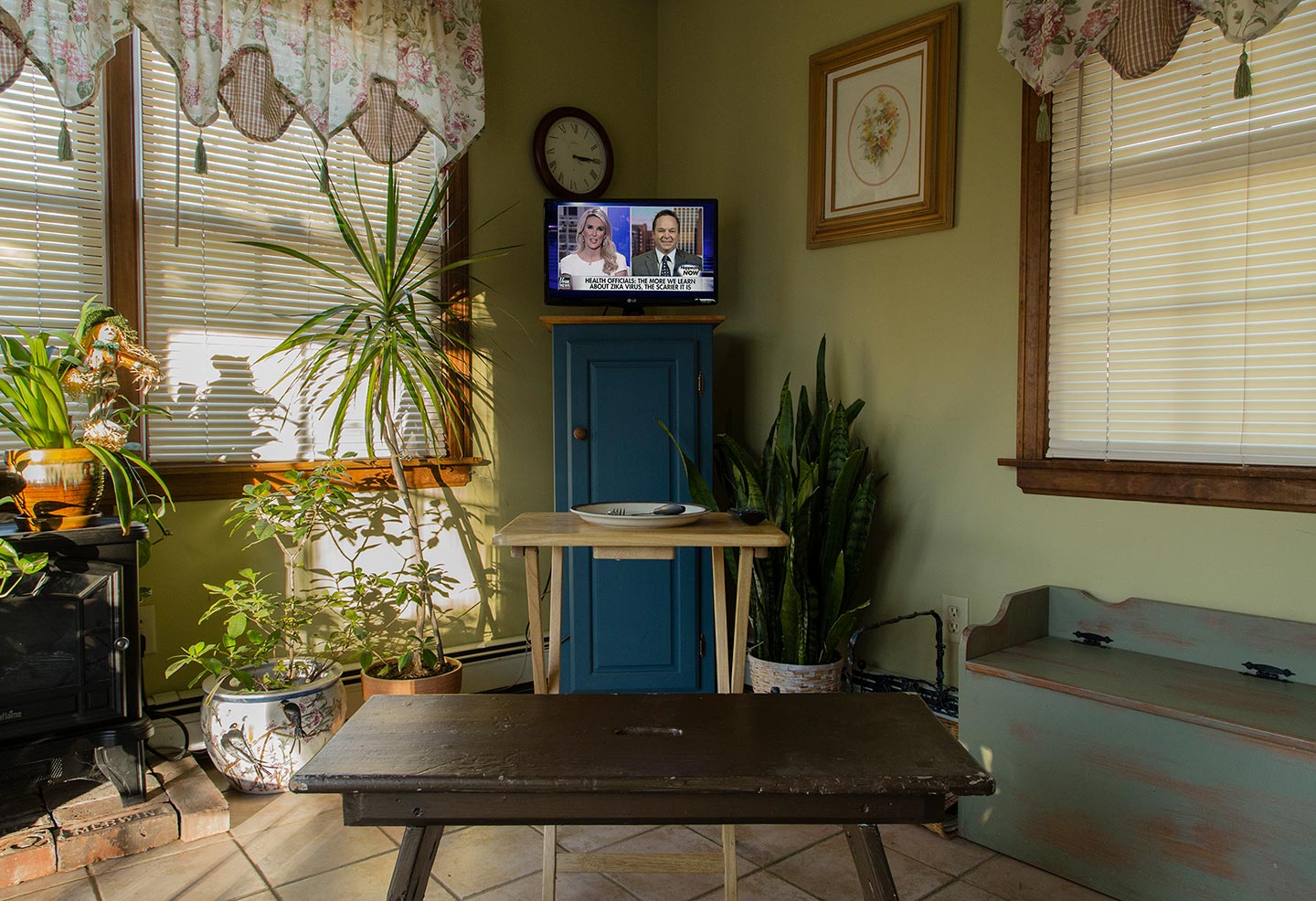 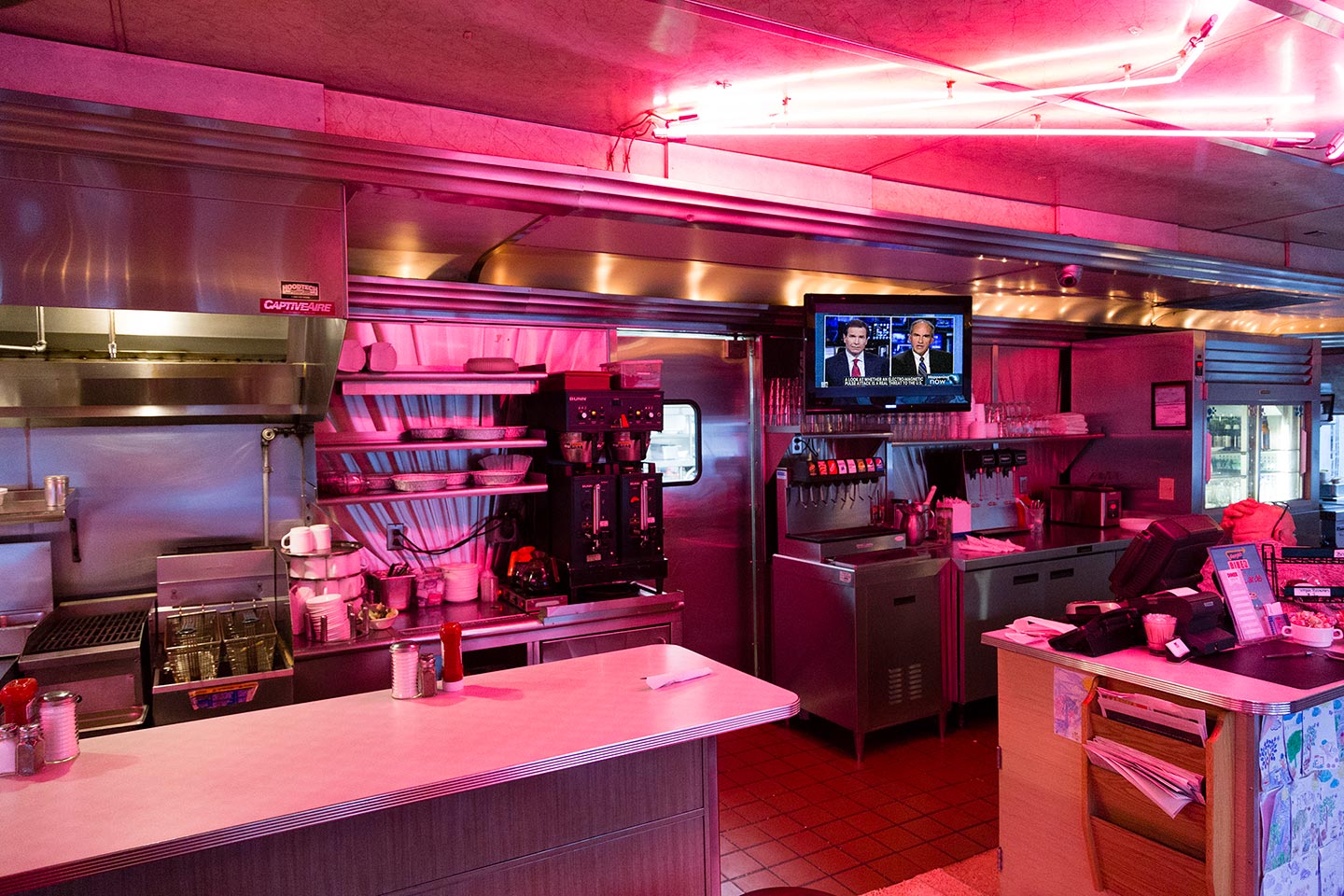 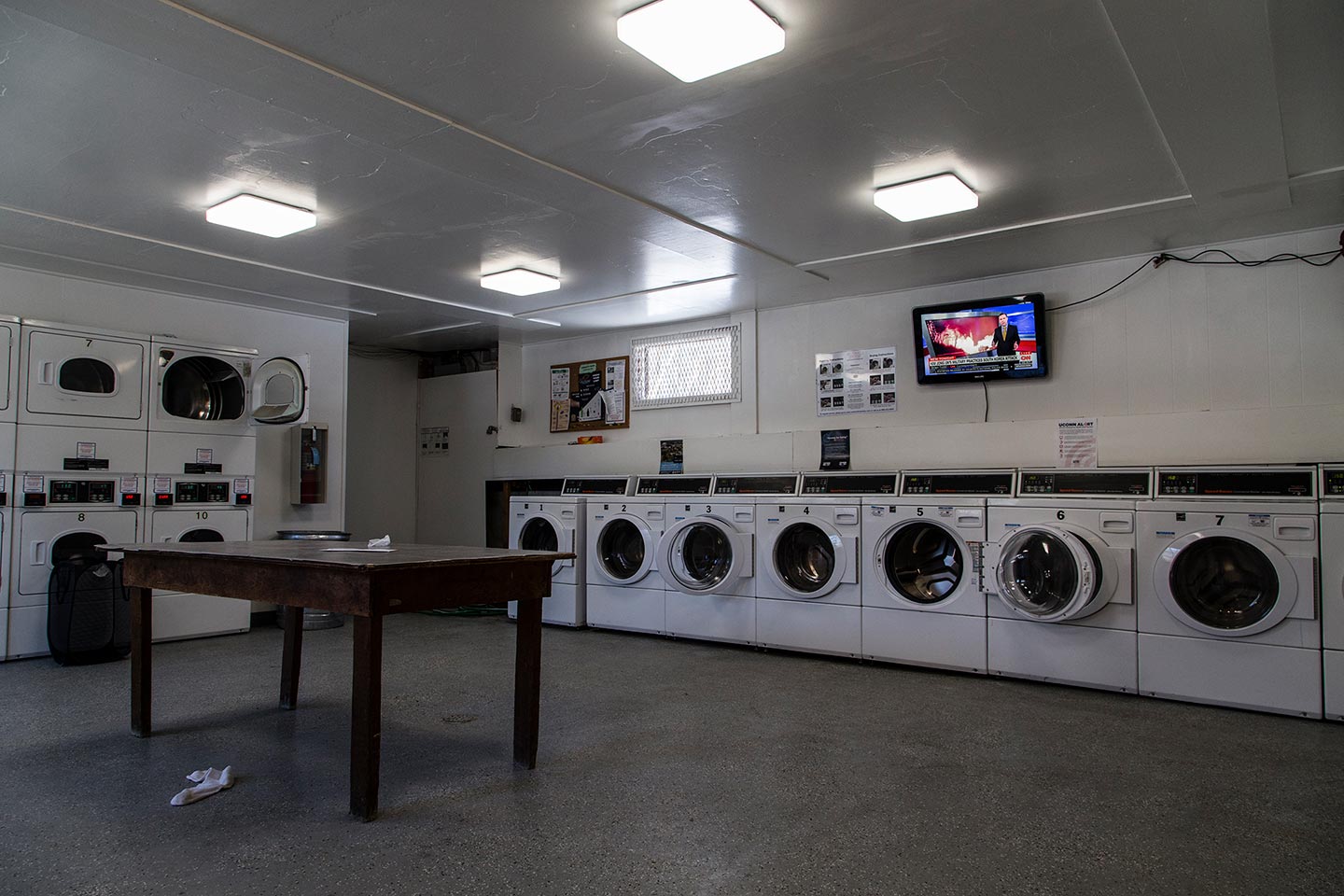 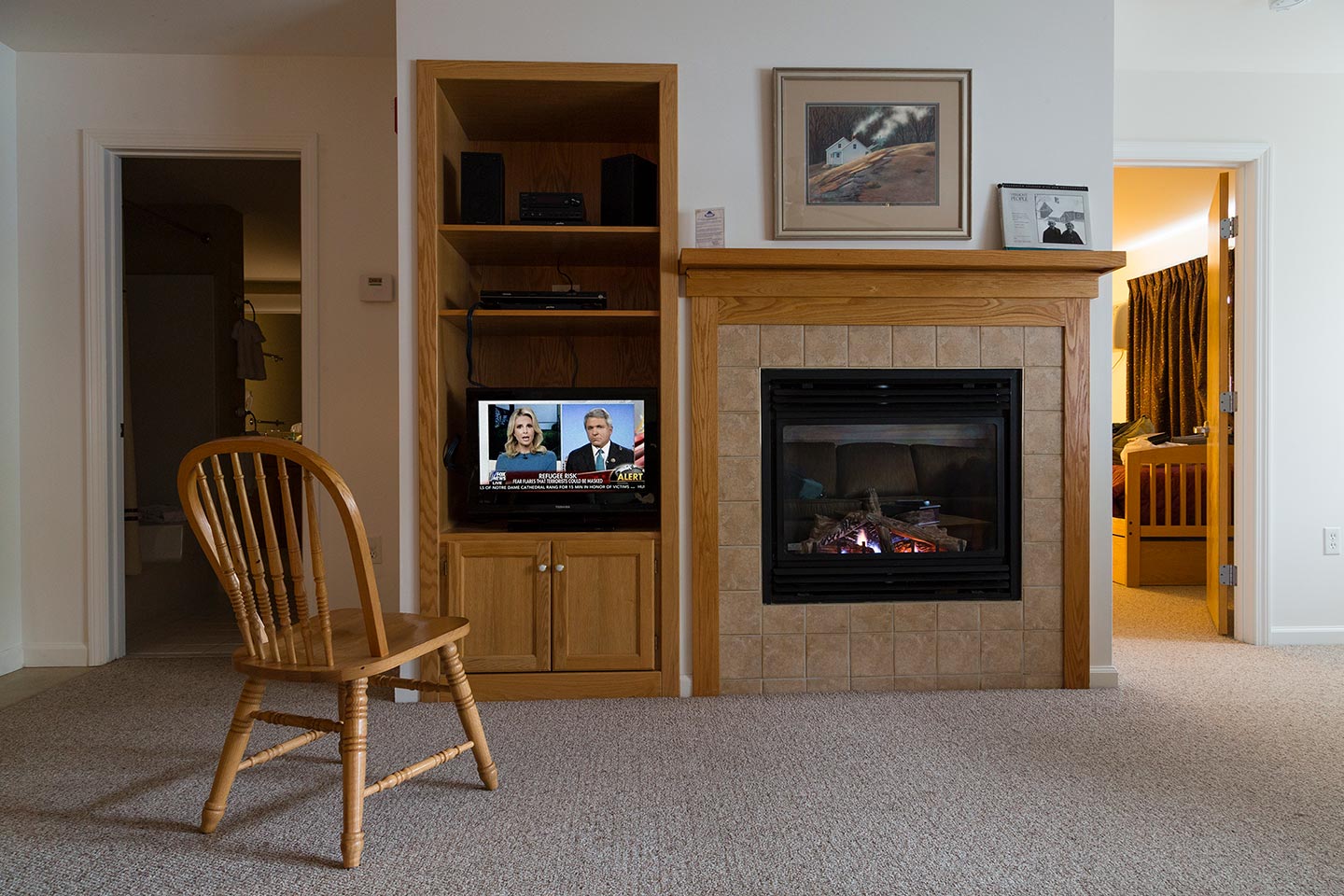 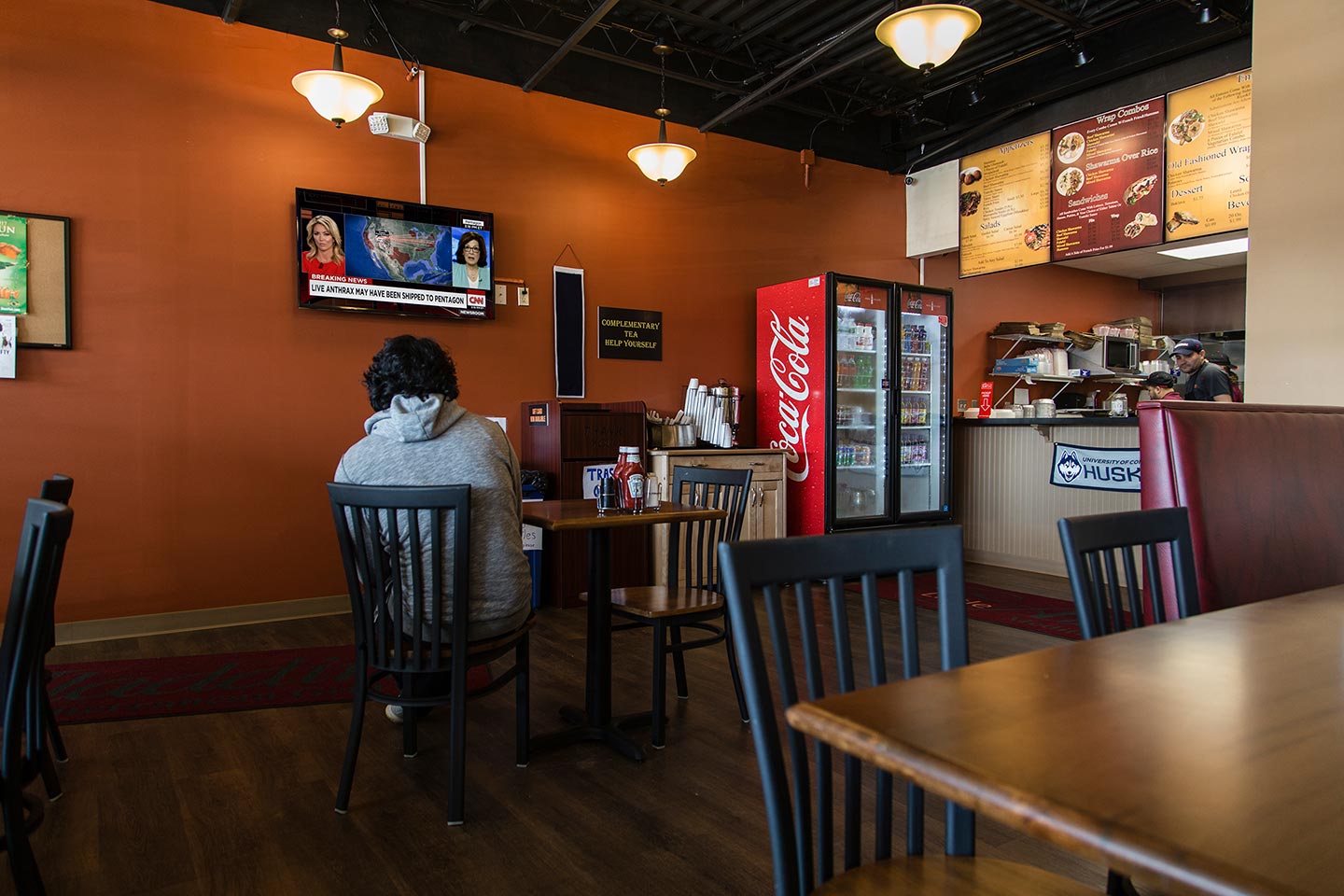 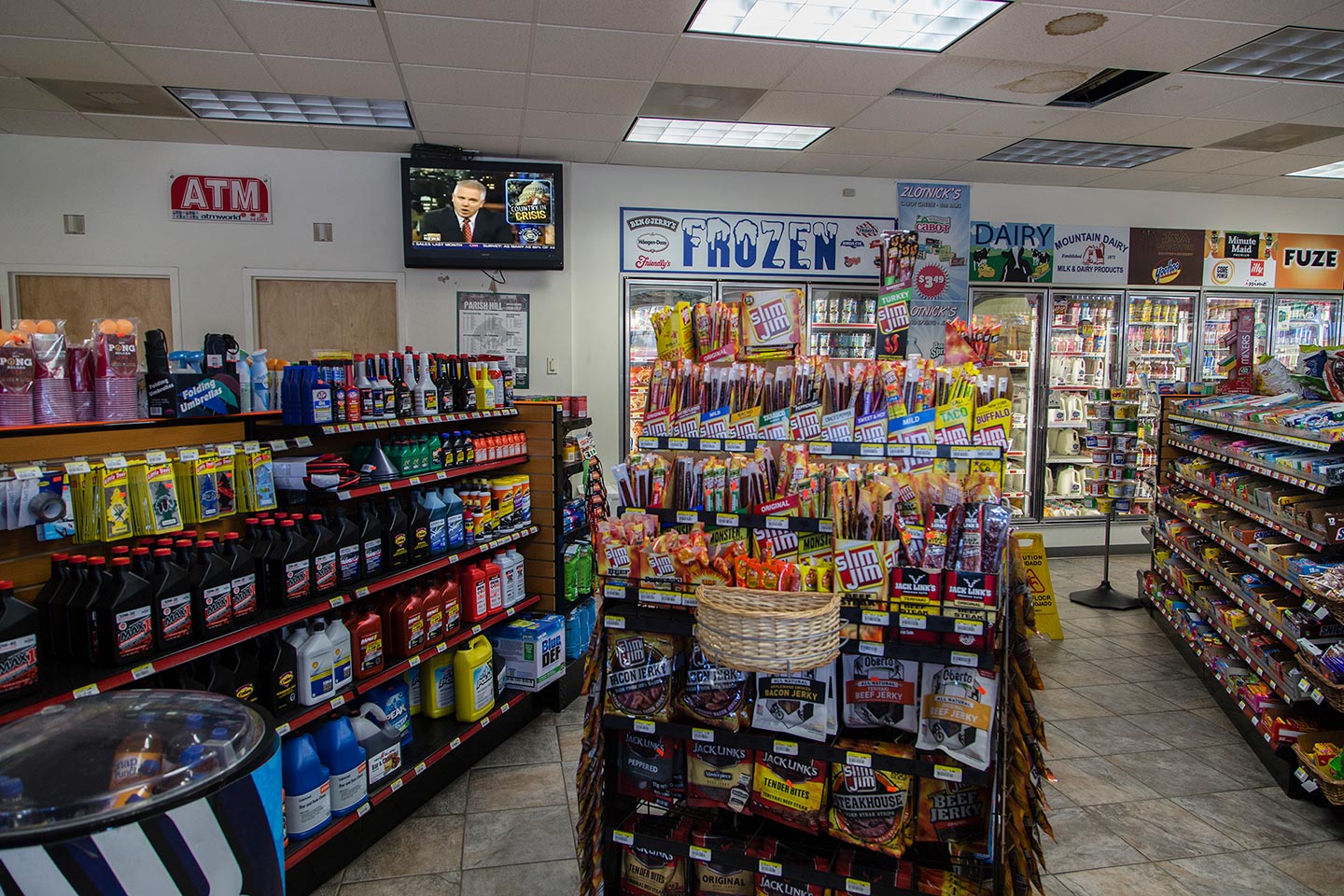 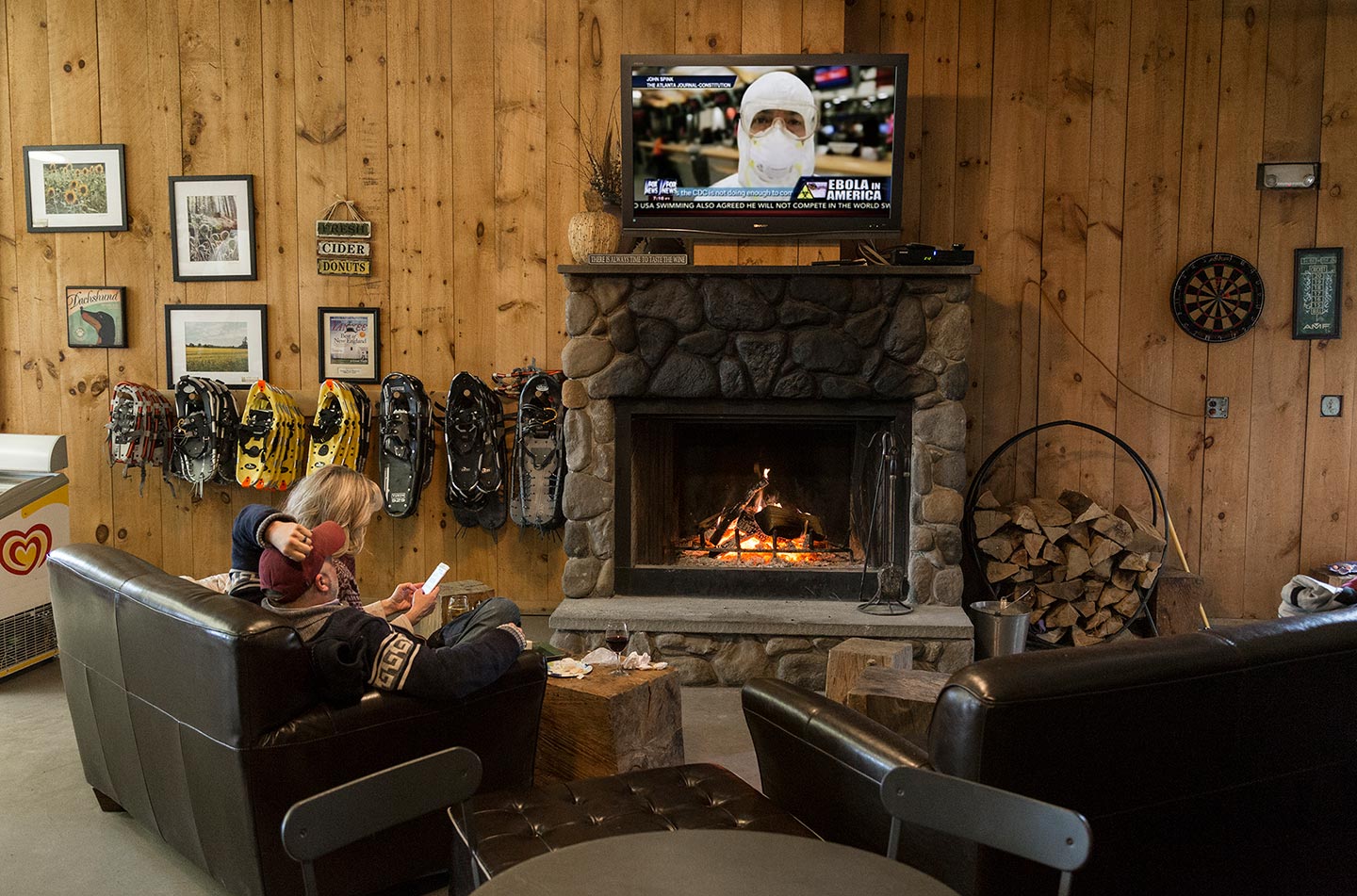 We will leave it to you to agree or not on whether the U.S. media actually promote a fear culture in America, like 22 year-old American photographer Michael Amato postulates in his series Fear Culture, USA. What impressed as about his work is how the images emphasize something we take for granted: the presence of a television screen in the public and especially private spaces we inhabit. We’re so used to watching news on the TV that we rarely ponder on how this influences us and our vision of the world (in the U.S. and elsewhere), but these photographs should make you think twice.

Thank you for taking the time to interview me! My main goal as an artist and photographer is to raise awareness about the issues that concern me. As a millennial born in America, I grew up in a post 9/11 world. Every night at the dinner table my family and I were barraged by a never-ending stream of breaking news and imminent threats. The television was situated in my kitchen so that it looked down on the dinner table, and as a child I pulled my chair around to the other side so that I could watch the news with my parents. I lived in a suburban neighborhood of mostly white families who tuned into their nightly news and became increasingly xenophobic and fearful.

Fear Culture, USA is both a response to my personal experience and the experience of my peers who have lived, and still live today, in a society that is constantly connected yet isolated, saturated with fear, and eternally divided.

It began as a very different project about fear and consumption in America. For several years, I had wanted to create a body of work that focused on the climate of fear in the United States. When I would discuss this issue with my friends and mentors, they wouldn’t recognize what I was talking about. The term ‘fear culture’ didn’t resonate with them. This frustrated me and motivated me to make artwork about the issue. At first I looked for environments where fear and consumption coincided, which led me to local gun stores, as well as Wal-Marts and Cabela’s stores. After exploring the idea further, the project developed into the body of work in its current form: a series of environmental portraits, or photographs of the everyday, that would become my senior thesis in college.

How would you describe USA’s fear culture? What characterizes it and how does it manifest itself?

Fear culture in the United States is essentially an amalgam of irrational fears that are shared by a large majority of people. For example, terrorism is something that inspires fear in the US, but the chance of the average citizen being harmed or affected by terrorism is slim to none. It is highly more likely that we will die in a car accident tomorrow on our commutes home from work rather than be killed in a terrorist attack. But there are significantly more Americans who live in fear of terrorism than those who live in fear of dying in a car crash. So, the question becomes: why? Because when we turn on the nightly news terrorism is right there in our face.

Frequently the way the narrative is structured is that we are in constant danger, although most fear propagation in the news is done more subtly. Consider this other example: the crime rate in the US is going down. But if you tune into the news every night and see report after report of violent crimes being committed throughout the country, it certainly doesn’t feel like things are improving. The news doesn’t need to specifically tell us that we’re in danger, it just needs to report on dangerous and scary things. If that’s all we see day after day, it’s no surprise that as a society we’re living in fear.

The way fear culture affects us is that it constantly lingers in the back of your head, reminding you to be afraid of some unknown threat or force that could do you harm. In other parts of the world it is not irrational to fear terrorism. There are many countries where attacks happen several times a week and being fearful is wise. But in the US, we live in a first world country in one of the safest times to be alive. As a society we need to become more aware of our relative safety, and focus on the things that are really killing us.

What inspired Fear Culture, USA, and what was your main intent in creating this series?

Cable news, documentaries, movies, and books! While going about my daily routine I would frequently stumble into a broadcast of the nightly news hour from media programs such as Fox News or CNN and pick up on the prominent fear-mongering that they would contribute to our daily news streams. As far as movies go, I watched Bowling For Columbine several years ago and it was like somebody flipped a switch. Specifically, I am referring to Michael Moore’s interview with Marilyn Manson, that addressed the way cable news branded him as one of the main influences on Eric Harris and Dylan Klebold [the killers of the Columbine massacre]: it really opened my eyes to the way that cable news controls the narrative and influences the general public opinion. Also, Network (1973), a fantastic film about the power of ‘the tube’. Finally, the works of Marshall McLuhan. I would recommend reading Understanding Media and The Medium is the Message to anyone who is reading this.

In regards to the second question, my main intent was to concisely express my concerns about the impact of fear culture through photography.

Why did you add USA in the project’s title? Is it simply because it’s your country or do you think that fear culture is particularly strong in the USA?

USA is in the title because it is where I live and it is where I have experienced a culture of fear. It is quite possible that there is an equally powerful culture of fear in nations throughout much of Europe and Asia, as well as the rest of the world, but I have never lived there so I can’t comment on it or make art about it.

How do the images of Fear Culture, USA reflect your ideas behind the project?

The spaces I chose to photograph for the series are carefully considered. Many of them are benign interiors—environments that we stop into on a weekly or daily basis. I wanted to subtly express my ideas, so in several of the images the televisions are rather small in the frame. The images on the television screens are actually separate photographs that I layer into the images during the editing process; but often, this isn’t even necessary. In many circumstances what is playing on the television is already promoting fear in some way. The television screens are meant to highlight the way that cable news addresses different crises and issues in the same formula. These crises are very real—I do not mean to imply that they are not important matters that deserve attention—rather I am saying that the way they are broadcasted can be manipulative and at times exploitative.

Did you have any specific references or sources of inspiration in mind while working on Fear Culture, USA?

Before starting this project I looked for inspiration all over the web. I was looking for photographers who had worked on similar projects or had a similar approach, but I couldn’t find anything. However, after I starting to work I began to find other artists who had projects that felt or looked similar to mine. One example would be Edie Bresler’s We Sold A Winner project. It’s very different than mine, but has a few notable aesthetic similarities, mainly because she photographed in gas stations and quick marts, and I often was photographing in the same environments.

How do you hope viewers react to Fear Culture, USA, ideally?

I hope that my work motivates viewers to reflect on how they might be affected by a climate of fear. Visual media is a powerful thing: too often we take it for granted and don’t recognize the influence it has.

The world we live in I suppose; I make art about the things that I think about when I’m driving or trying to fall asleep at night. That might sound silly but they are the two times of the day that my mind really begins to wander, it’s almost like a meditative state. However, not all of my work is as grim as this series. I also have a very prominent interest in subcultures and alternative living.

To name a few, I admire the work of Trevor Paglen, Mike Brodie, Anton Kusters, and the late Tim Hetherington.