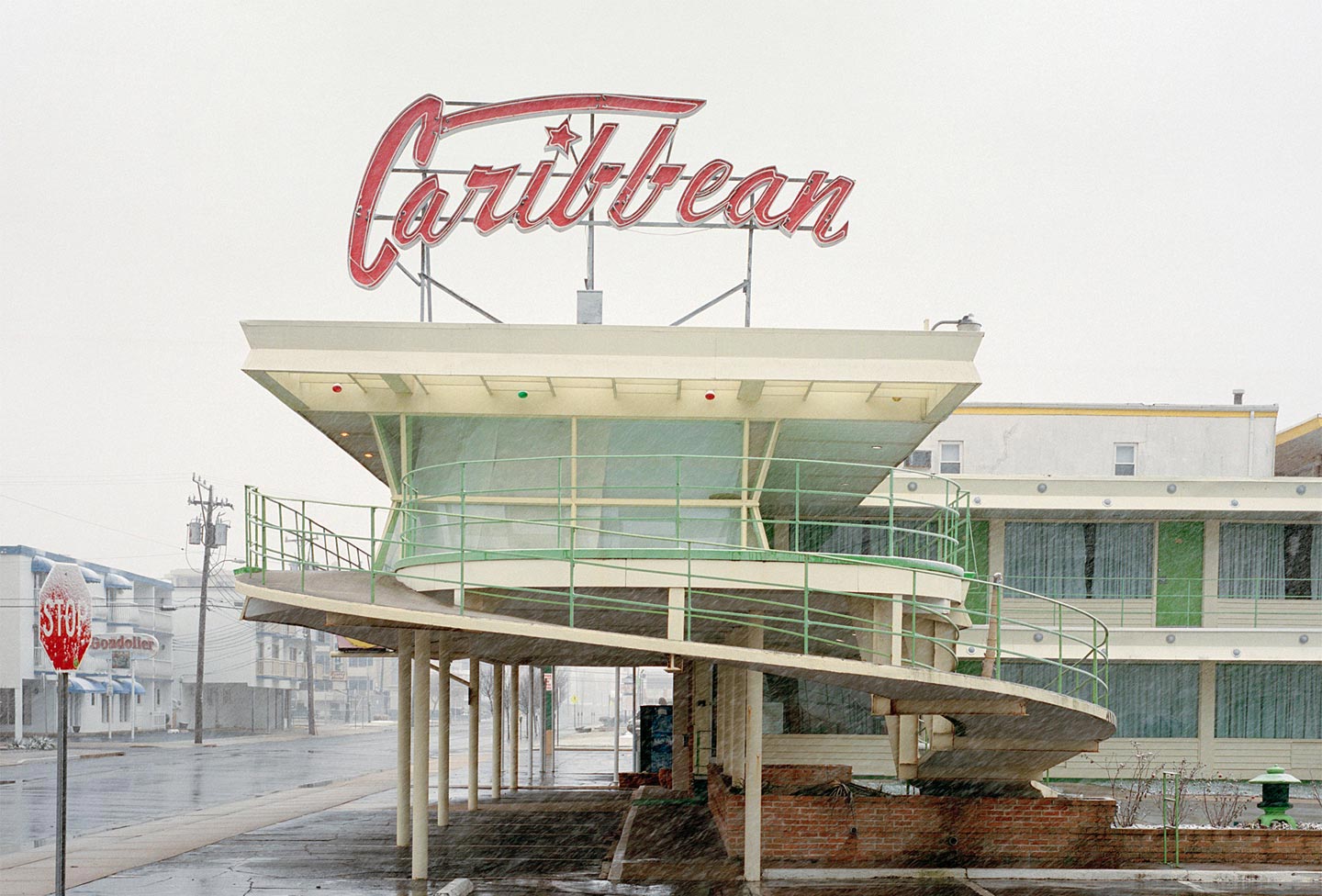 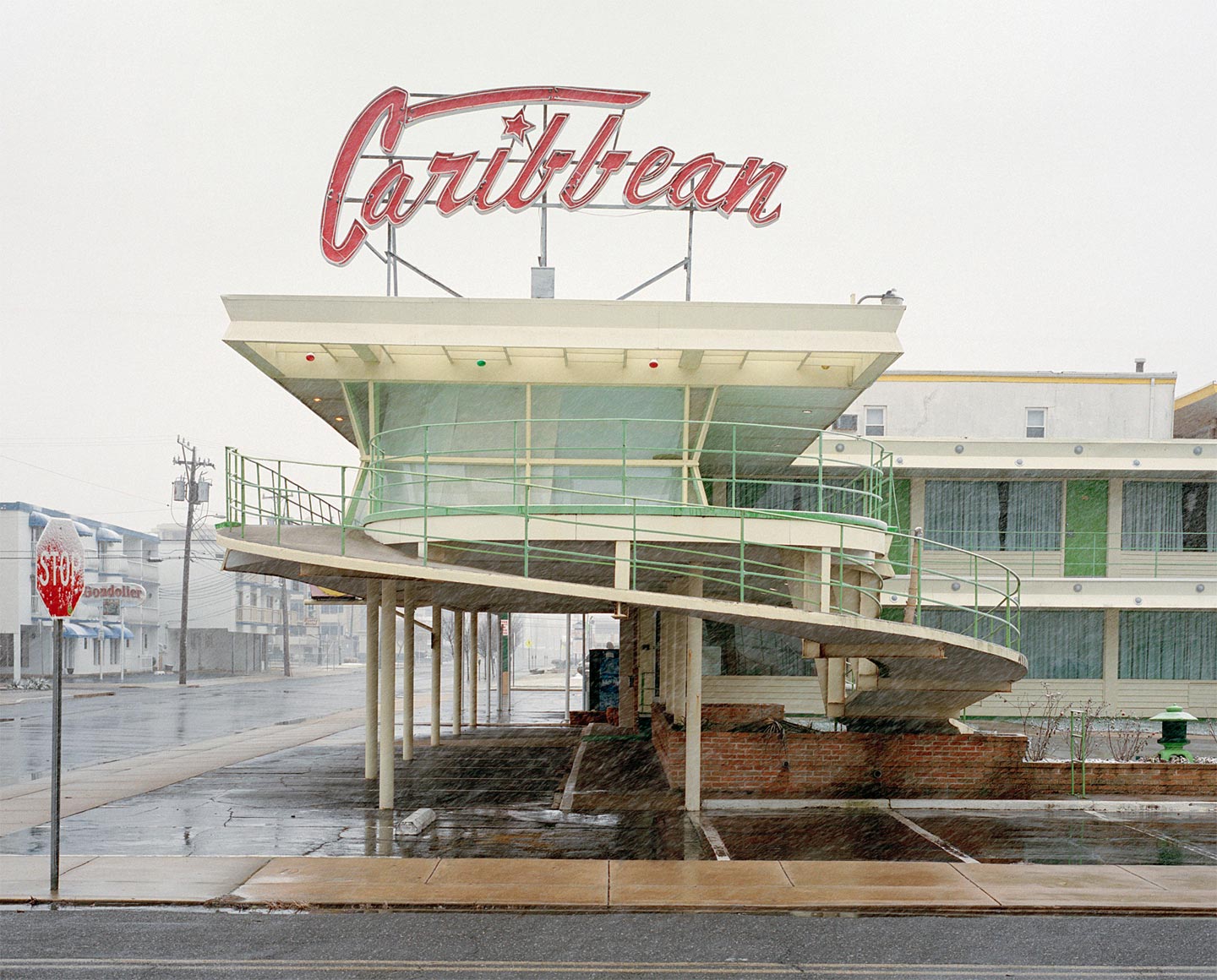 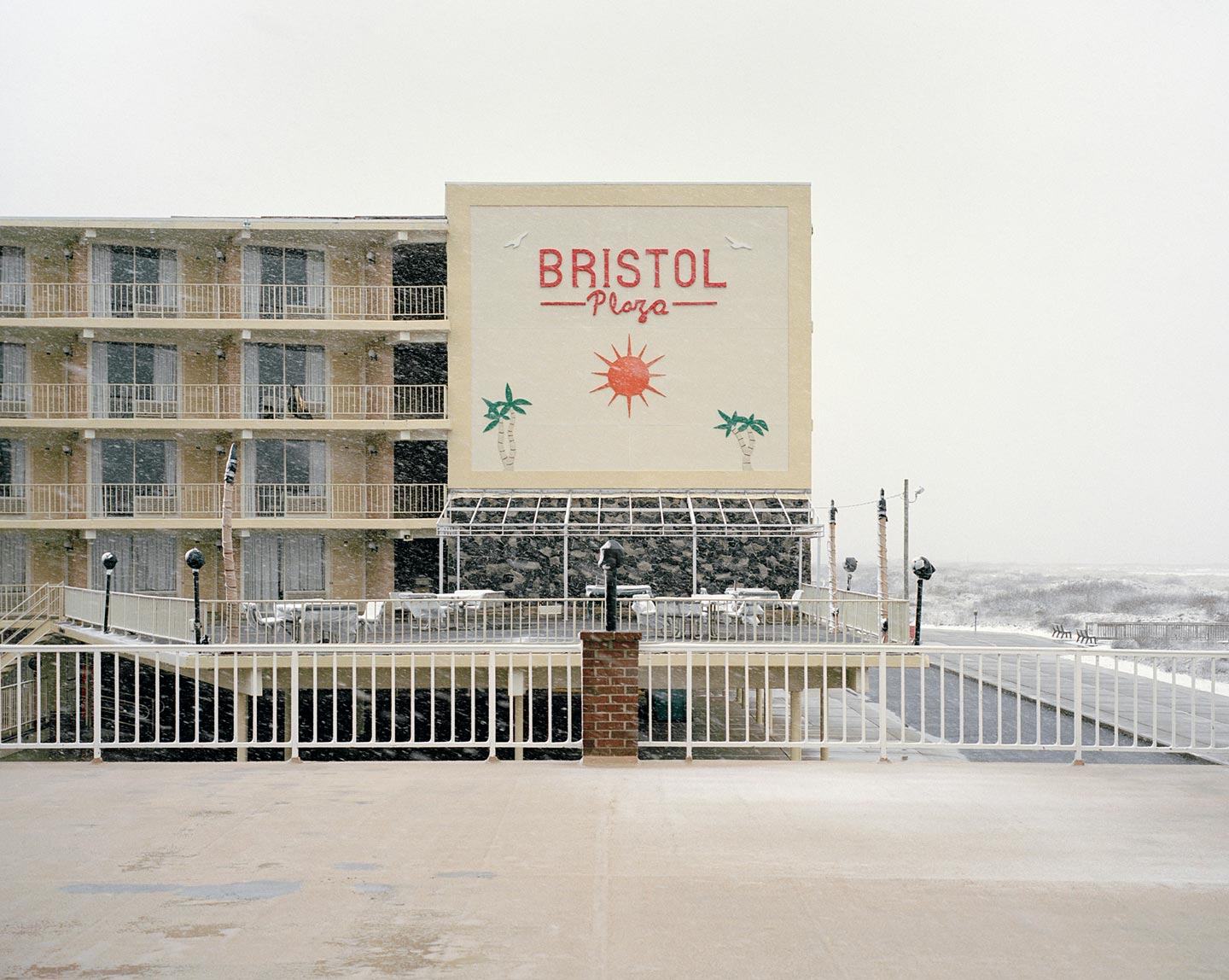 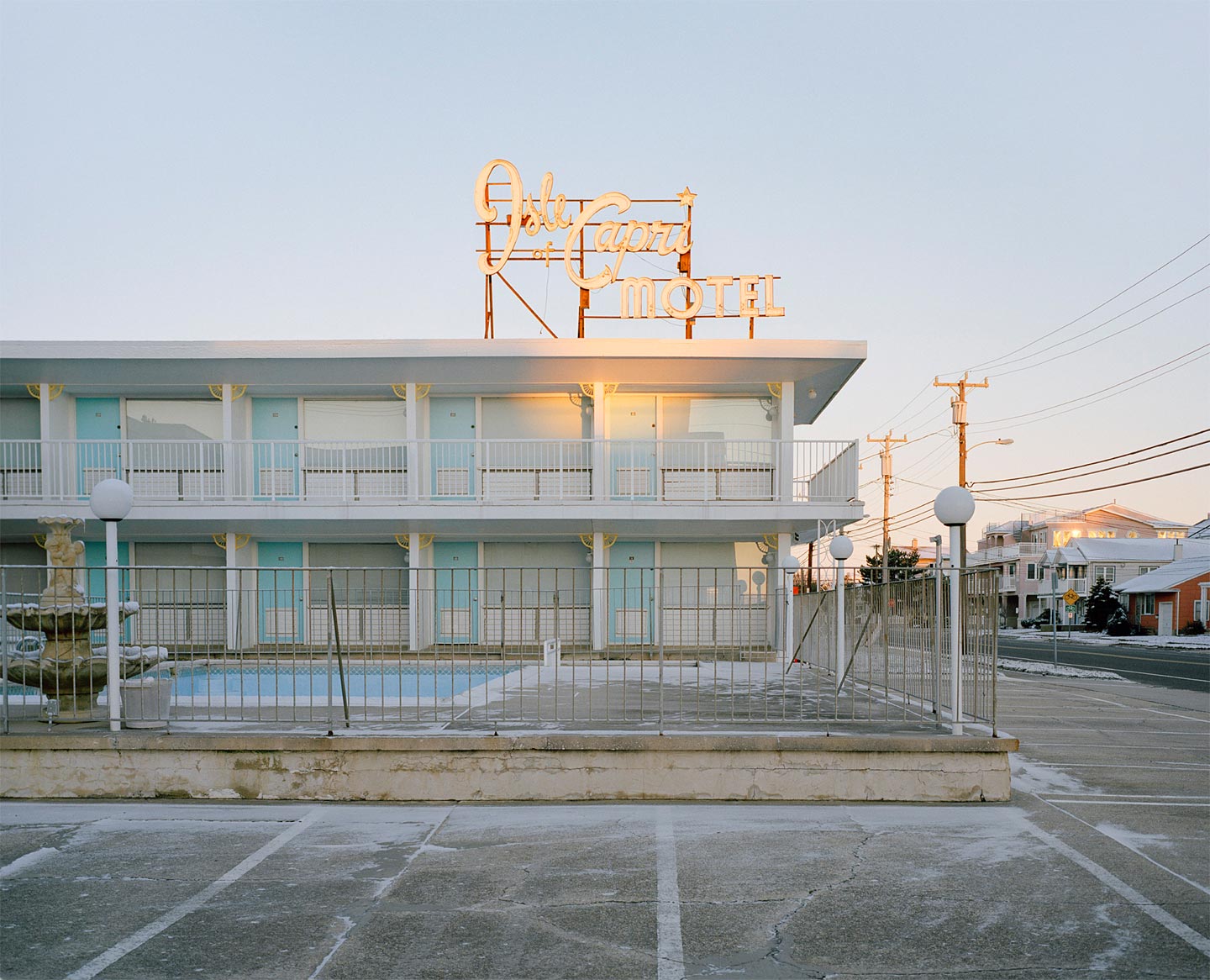 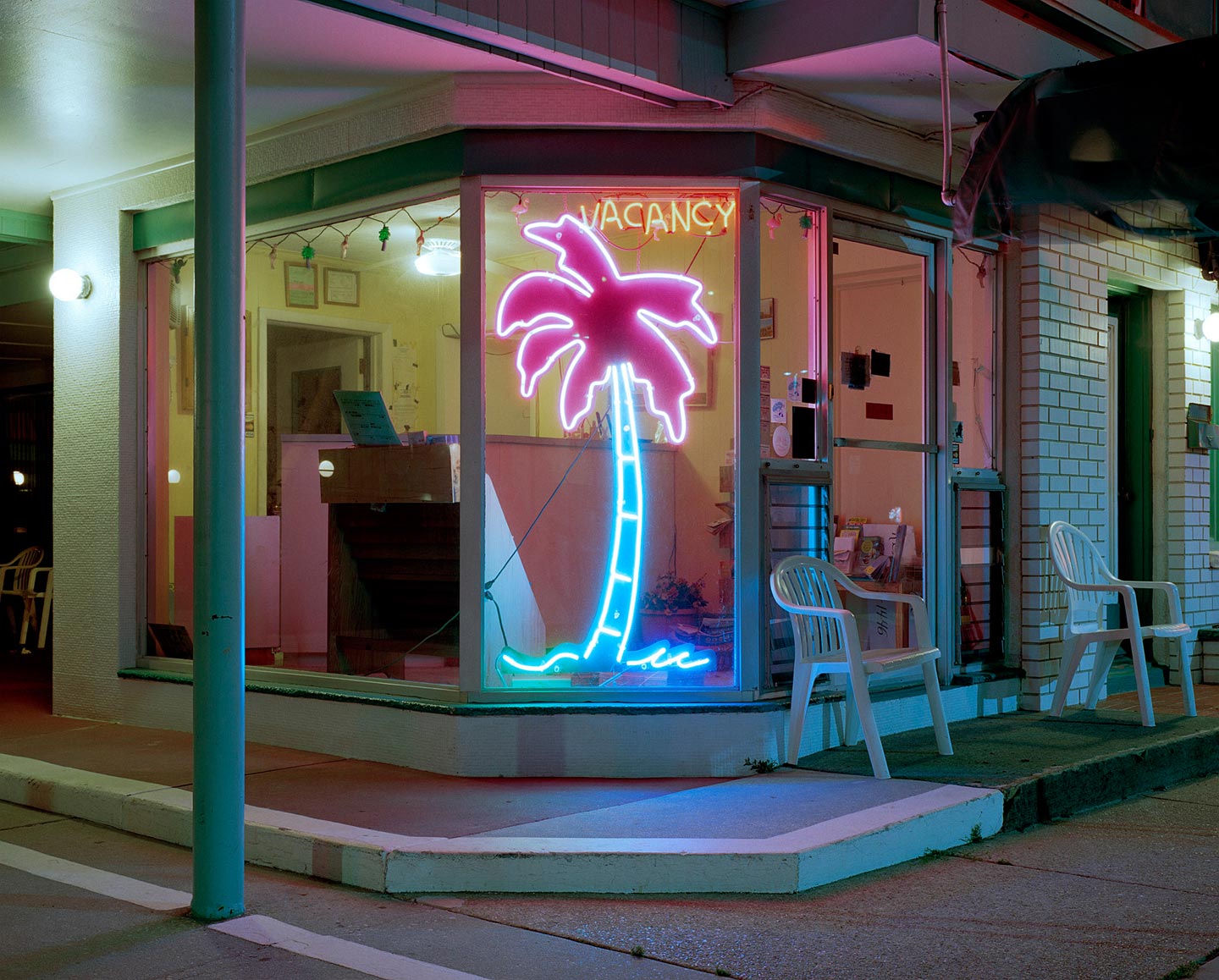 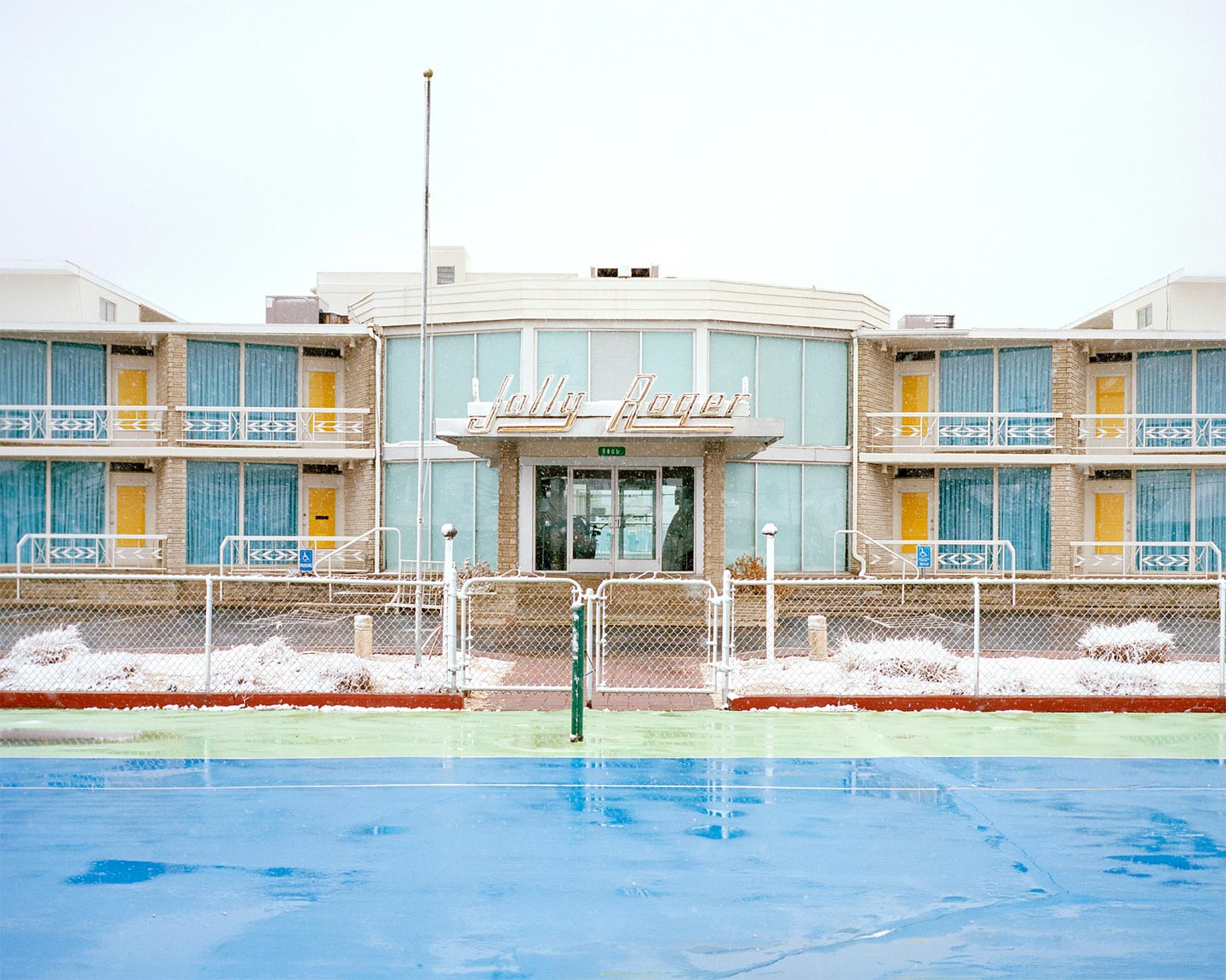 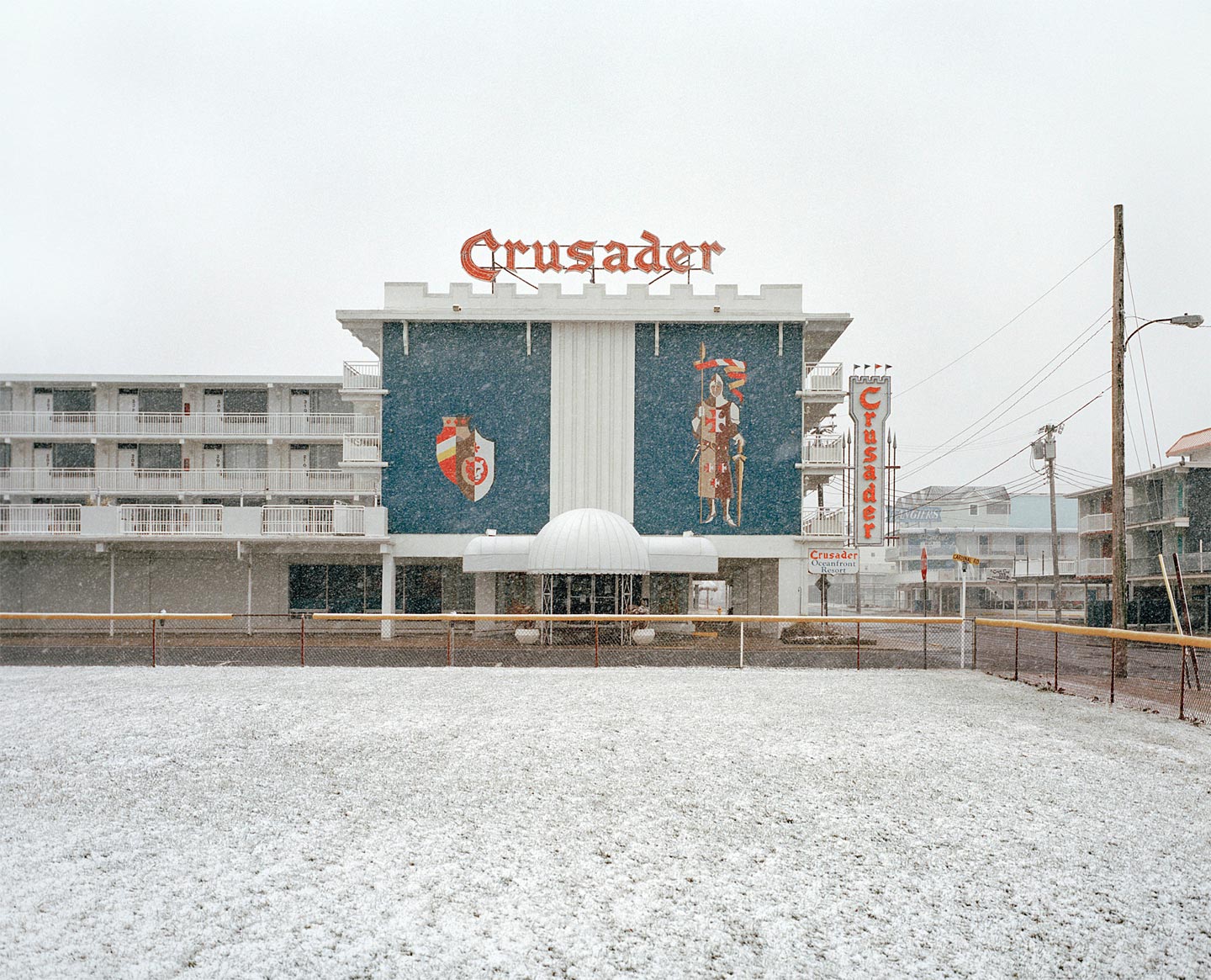 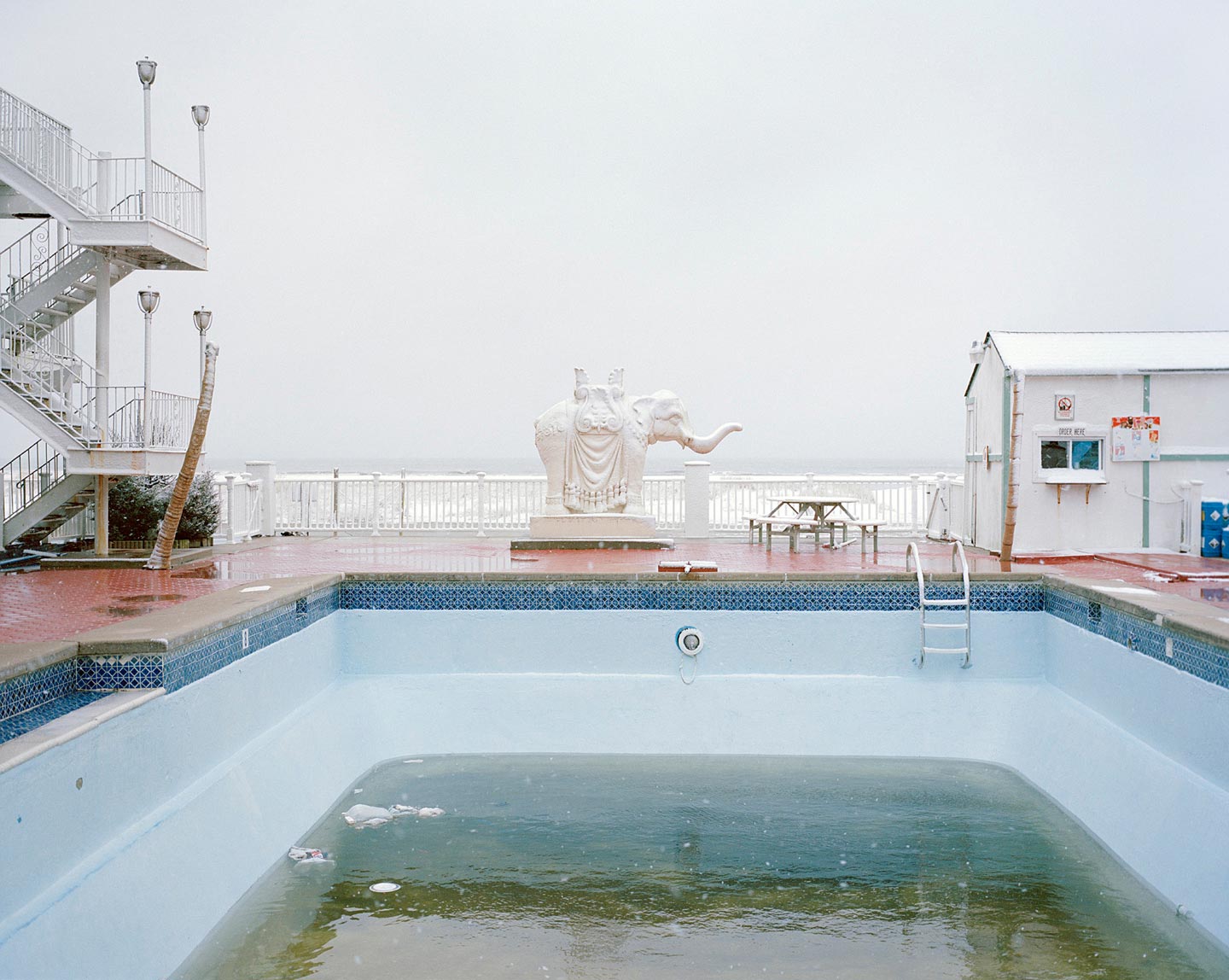 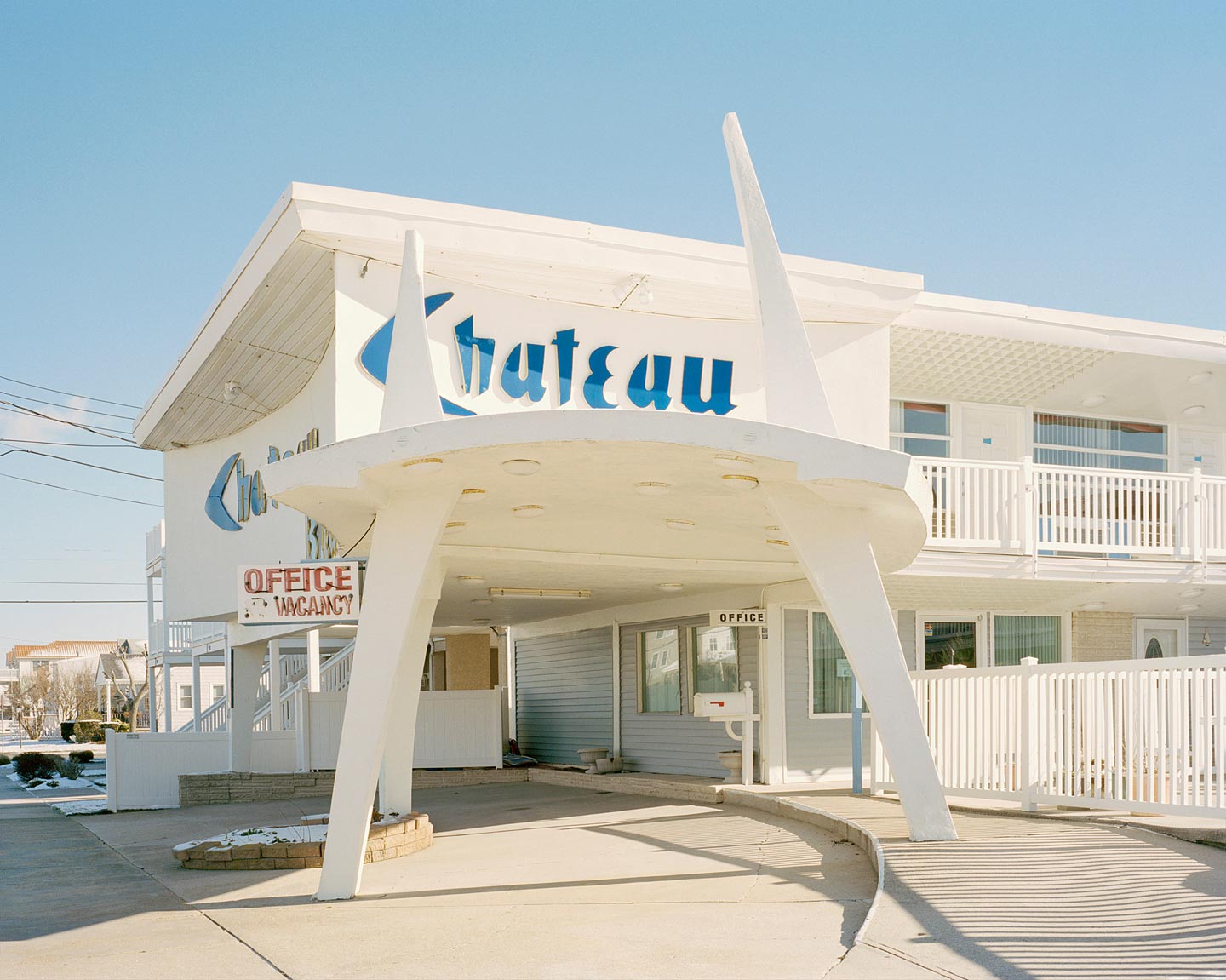 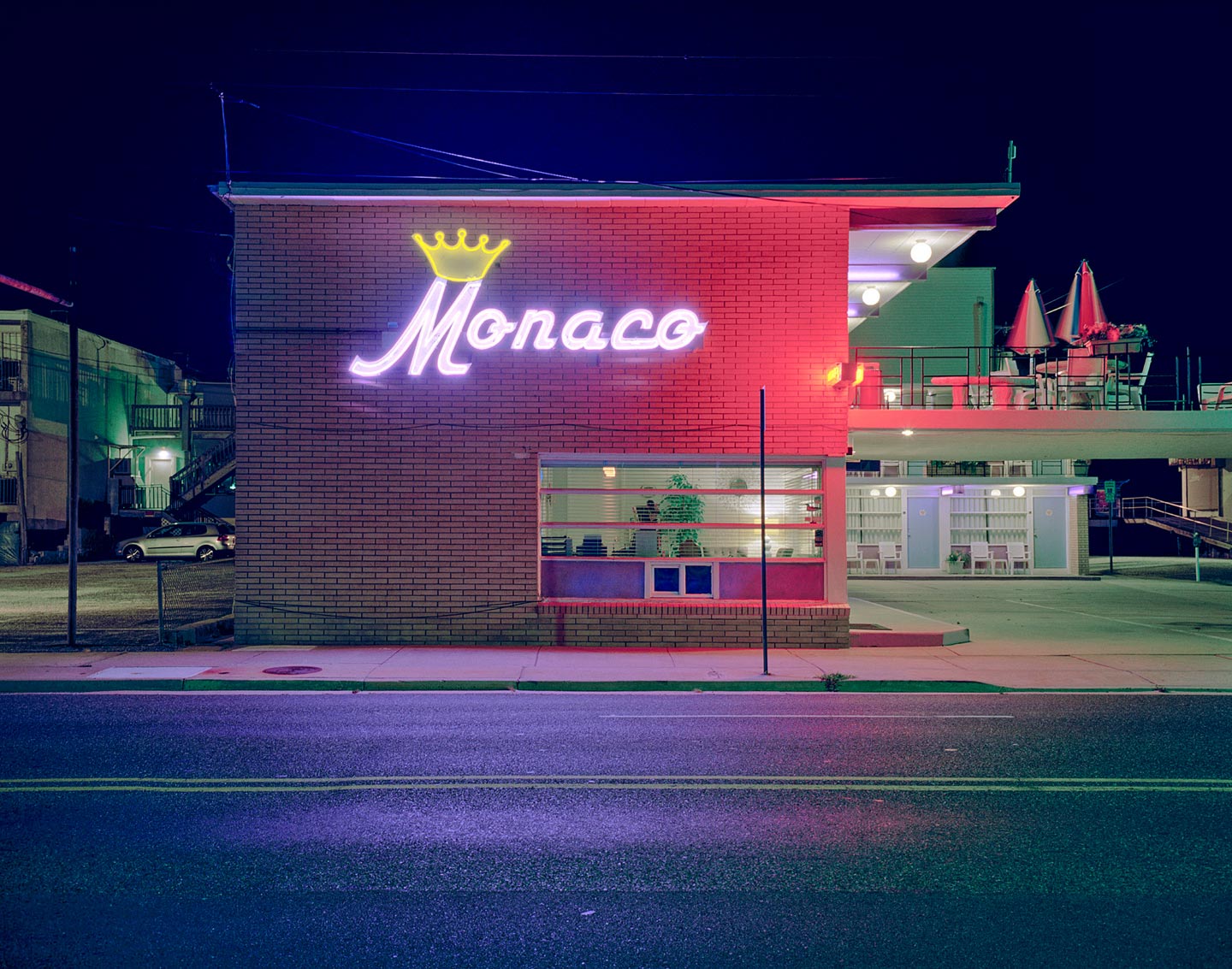 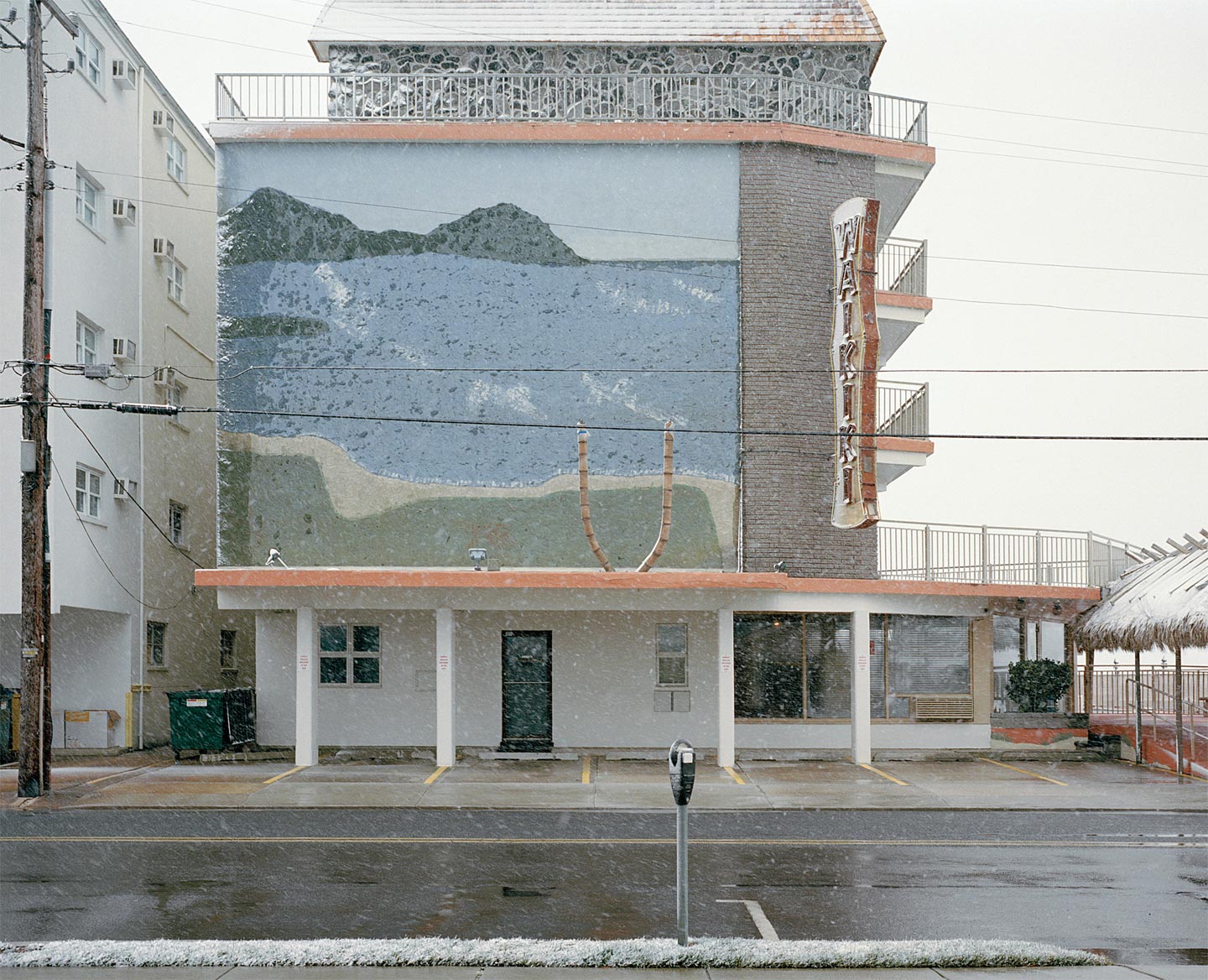 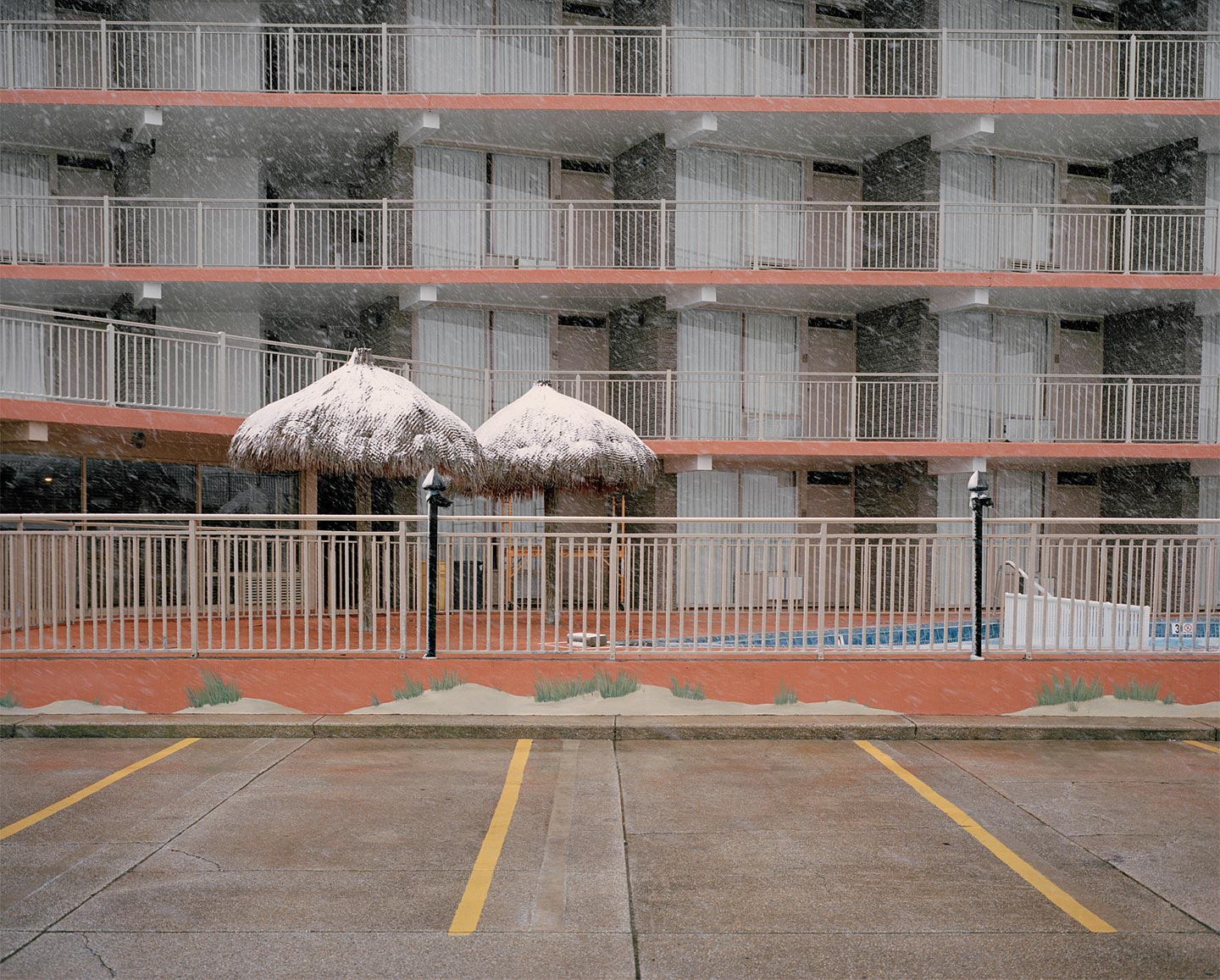 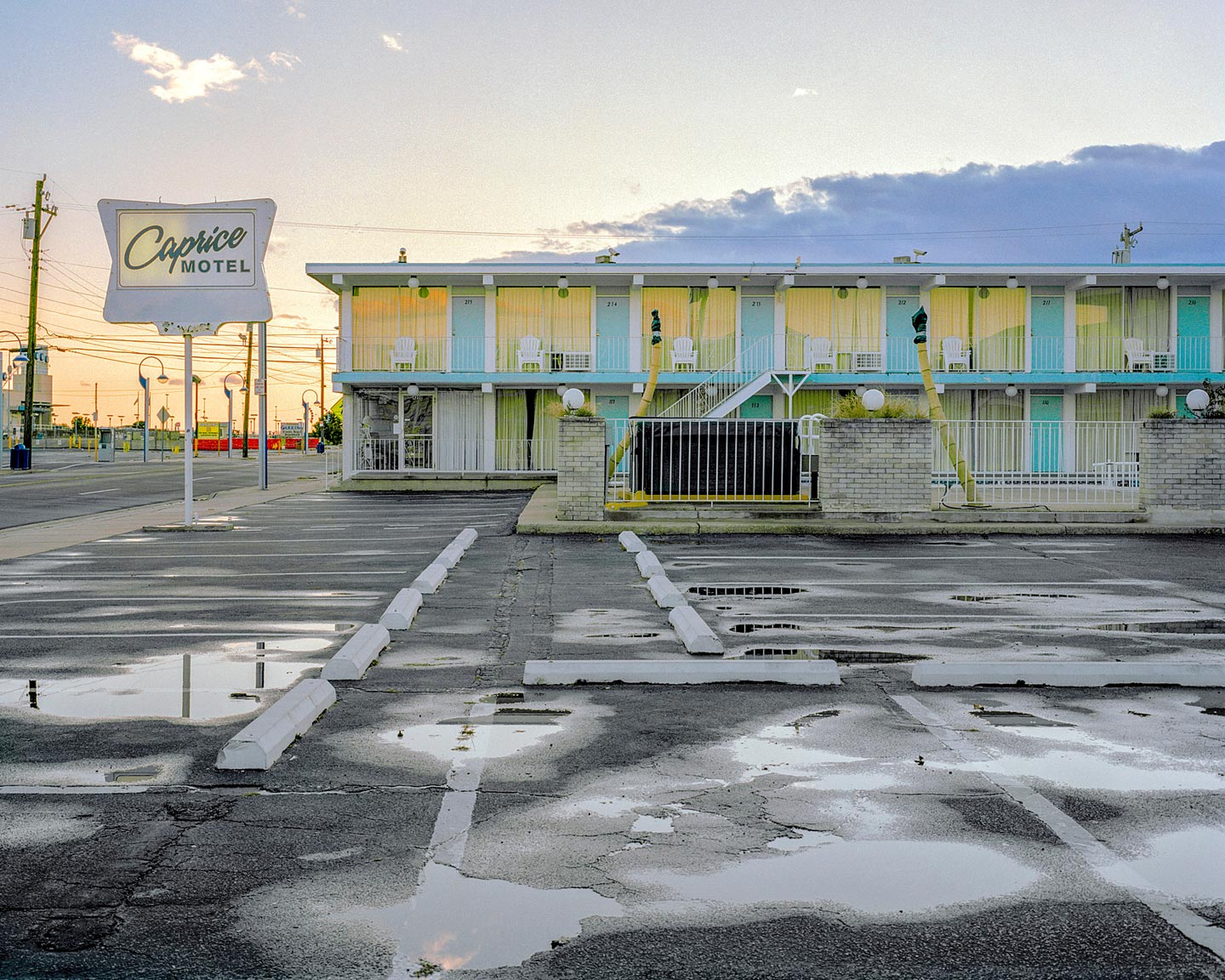 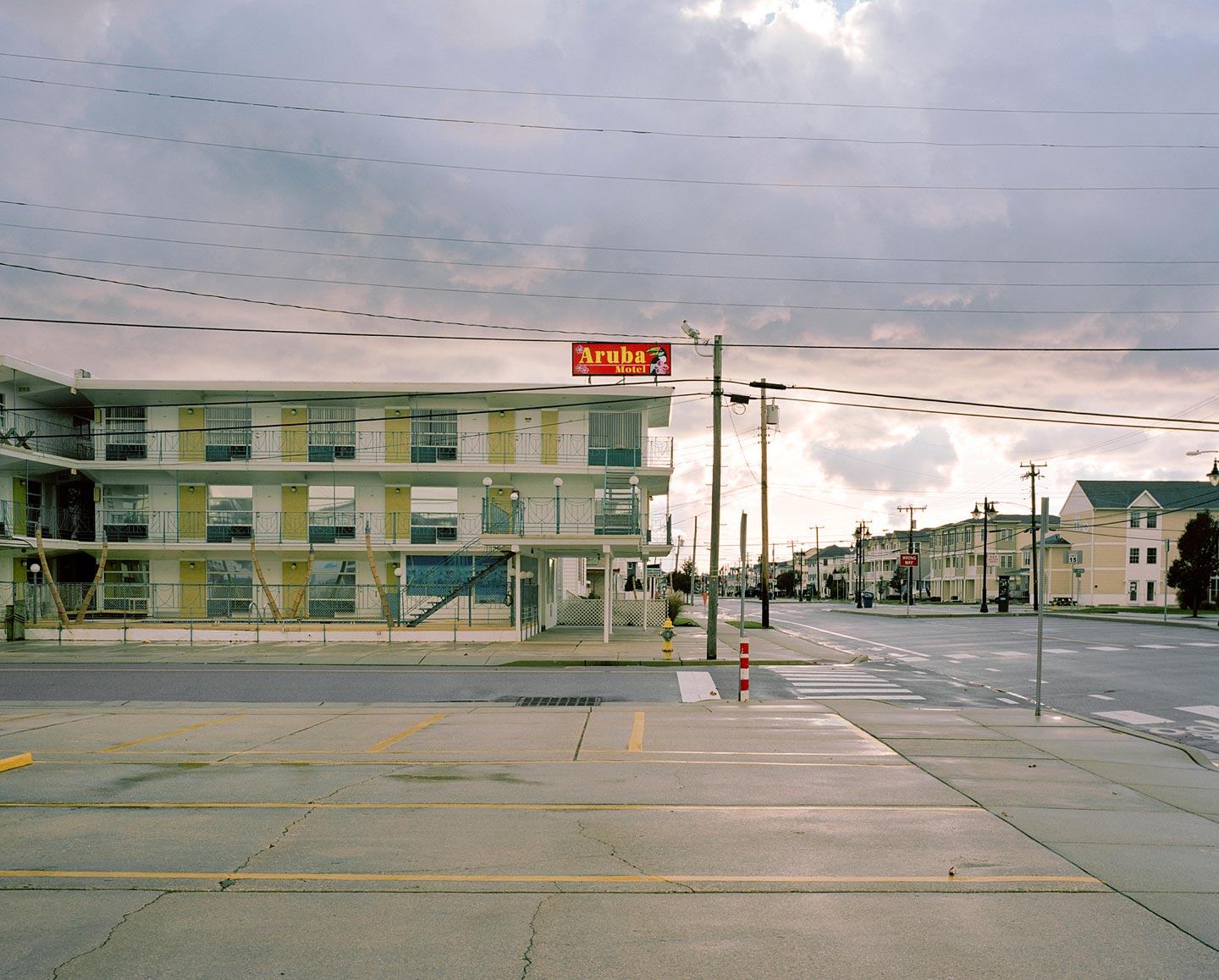 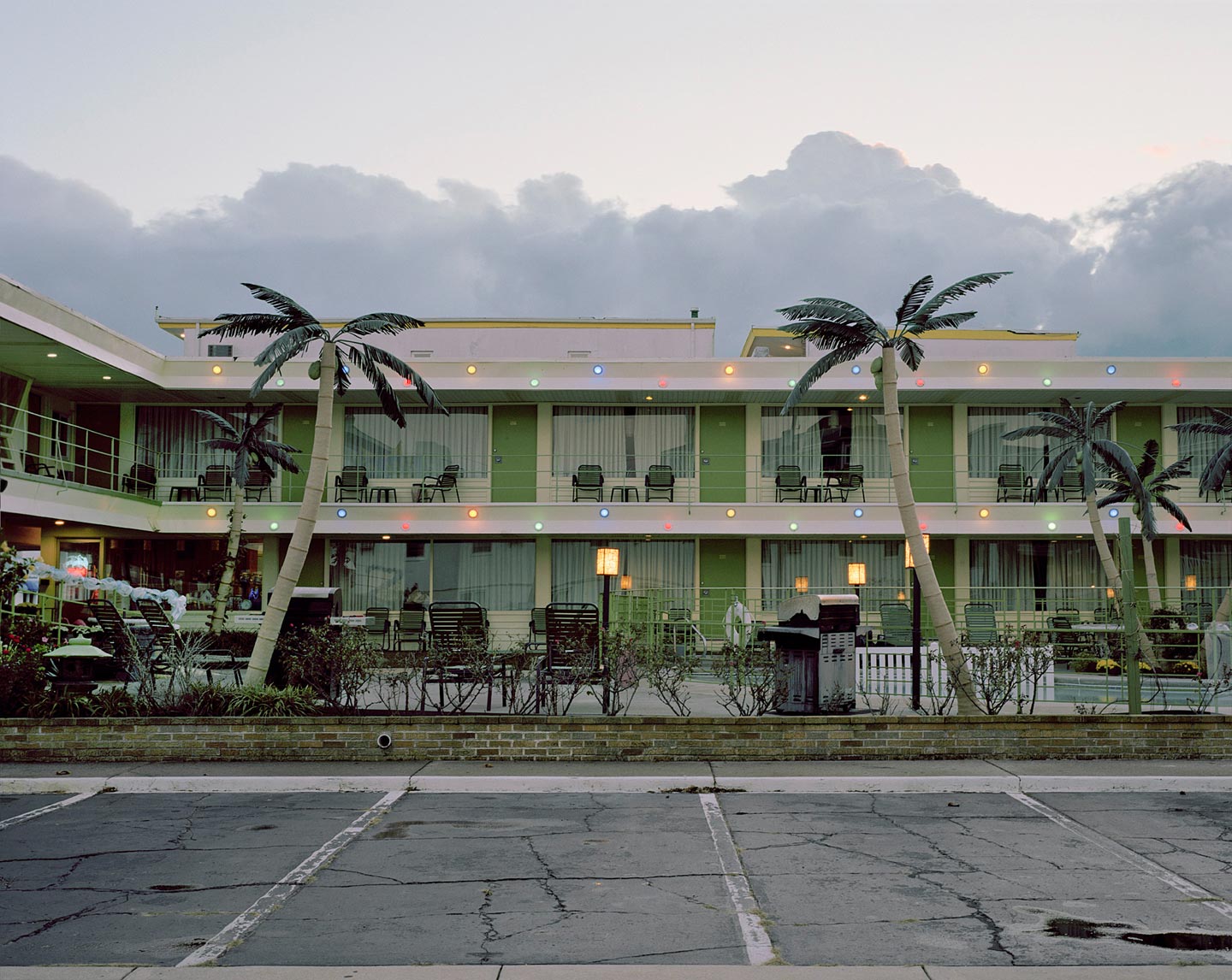 Worldwide, the words Jersey Shore have become synonymous with bulky guys and busty girls partying hard and shaming themselves in so many different ways (thank you, MTV). For the non-American, Jersey Shore is actually the common name used for the coast of the US State of New Jersey, a popular summer destination since the 1950s, when many new resorts were constructed to host the influx of tourists. American photographer Tyler Haughey‘s beautiful series Ebb Tide captures the unique architecture and mood of these resorts during the off season, when the tourists are gone and the motels sprinkled with snow.

Hello Tyler, thank you for this interview. Ebb Tide is a series of photos of resort motels found along the southern New Jersey coastline. What is special about these motels?

The motels are all located on a small five-mile-long barrier island in New Jersey, and make up the largest concentration of postwar resort architecture in the United States. These structures are some of the finest examples of midcentury European architectural design being brought down to an everyman level, creating a sort of regional modernism. What is so special about these 50+ year old places is not only that so little has changed about them since their original construction, but that they are also still functioning at a high level, with hundreds of thousands of people visiting the area and staying at the motels every summer.

You seem to have made most of the pictures in fall/winter, and anyway not during tourist season.

Shooting the motels during the winter months came from a desire to strip away any distractions and depict them in a more focused way that best described their individual identities. It was also a way of exploring what they look like during the other nine months of the year, when the tourists have gone home. I felt that these places were like real-life abandoned film sets—vacant, but still suggesting a tangible recent history.

Choosing to photograph them during this time of year also arises out of my interest in and experience with the off-season of a tourist destination. Growing up on New Jersey’s coast, the post-summer months—when the tourists have left and the area becomes quiet and peaceful again—are always what you look forward to, and that is something I was thinking about while making this work.

What inspired Ebb Tide? What resonated with you about these resorts that you decided to make them the subject of your project?

I grew up less than a mile from the beach just outside of Asbury Park, New Jersey, which is 100 miles north of The Wildwoods; so I’ve always been innately drawn to the vernacular architecture of the state’s coast. I would also spend a lot of weekends at my grandparents’ beach house in Barnegat Light, which is halfway between Asbury Park, where I grew up, and The Wildwoods, where the motels are. Barnegat Light is a very small, quiet beach town, and visiting it as a kid was like traveling back in time: it felt totally different than the beach towns from where I lived, and had such a specific sense of place. Along the coast back home I was used to seeing these ultra-modern, gigantic mansions, while the homes you’d see in Barnegat Light were modest, with beach gravel driveways and cedar shingles. It felt frozen in time, like nothing there had changed in the last 100 years.

When I first visited The Wildwoods I immediately had that same reaction, as if I’d happened upon a time capsule from decades earlier, and that feeling was a major reason for my attraction to the area. I loved how all of the motels were built almost identically, using many of the same structural and design elements; but set themselves apart from each other with their different color schemes, iconography, and signage. When I started doing research about them, their actual history enhanced my interest even further.

Did you have any specific references or sources of inspiration in mind while working on Ebb Tide?

My father was a union sign painter when I was young. I remember working with him on certain projects in our basement at home, so I’m sure that’s where my interest in signage and roadside architecture stems from. The research and writings of Robert Venturi, Denise Scott Brown and Steve Izenour, who actually spent a good amount of time in The Wildwoods themselves, were also a major reference point for me while making this work. The writer John McPhee’s book on this area of the state, The Pine Barrens. The postwar beach houses built by architect Andrew Geller along the Northeast seaboard. Andrea Robbins & Max Becher’s book The Transportation of Place.

George Tice’s dedication to and tireless exploration of a specific place (which also happens to be New Jersey). The objective approach of the 19th century French photographers from the Missions Heliographiques, specifically Edouard Baldus.