Read the story behind City Space, the series of brilliant images that Clarissa Bonet has been sharing with us as our #PhotographerInResidence!"/> City Space — Clarissa Bonet Recreates Moments of Street Life She Experienced in First Person | FotoRoom 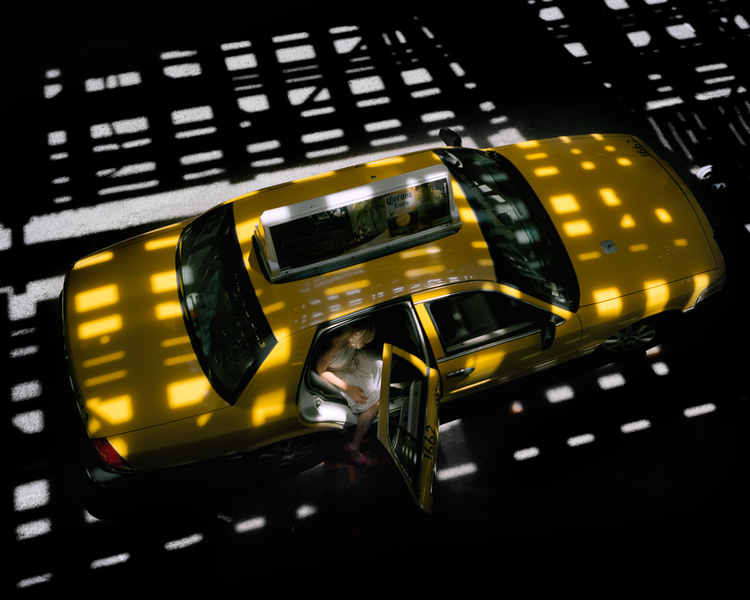 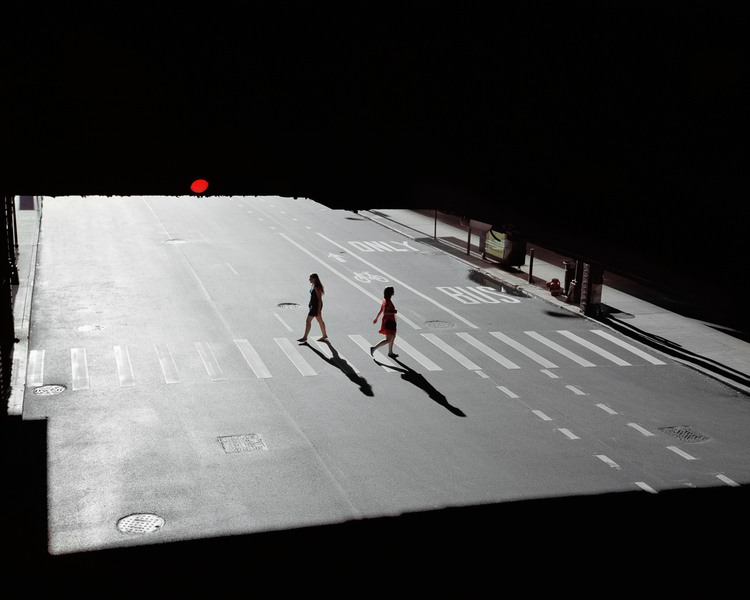 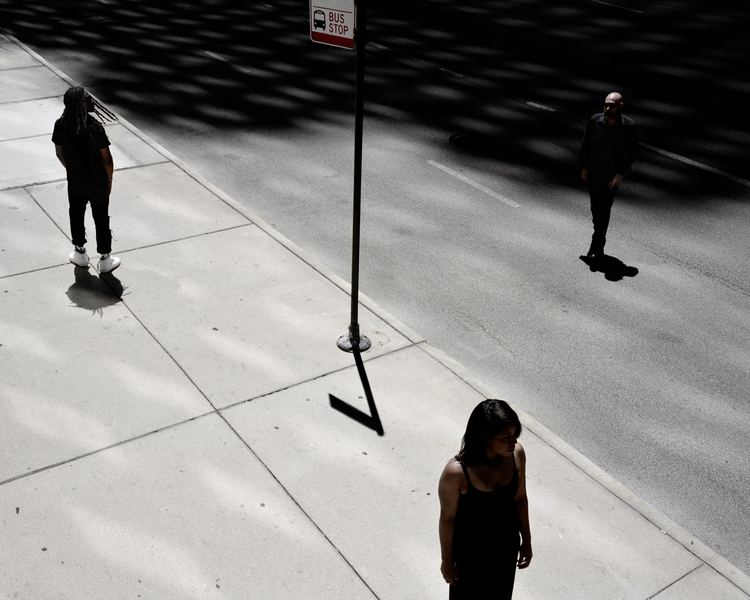 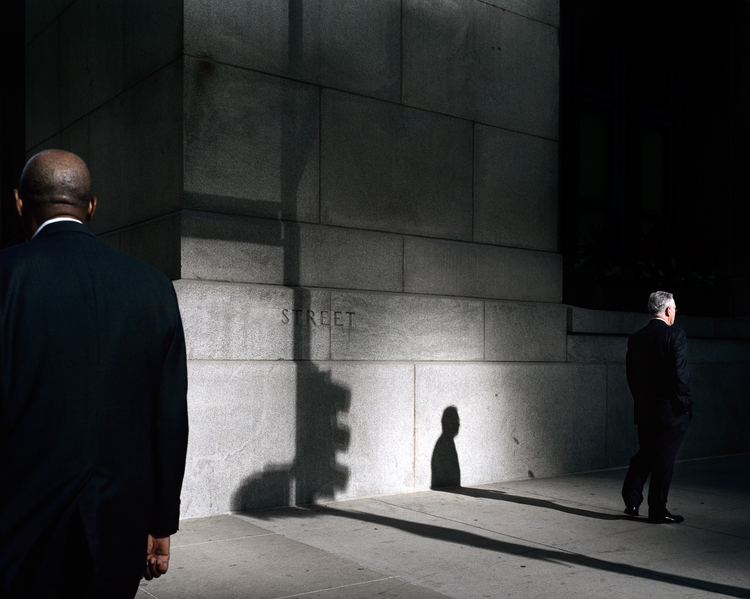 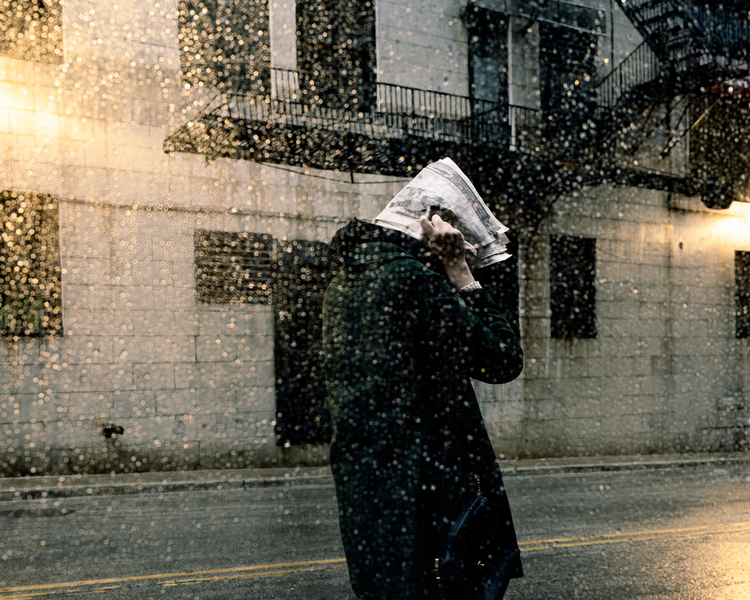 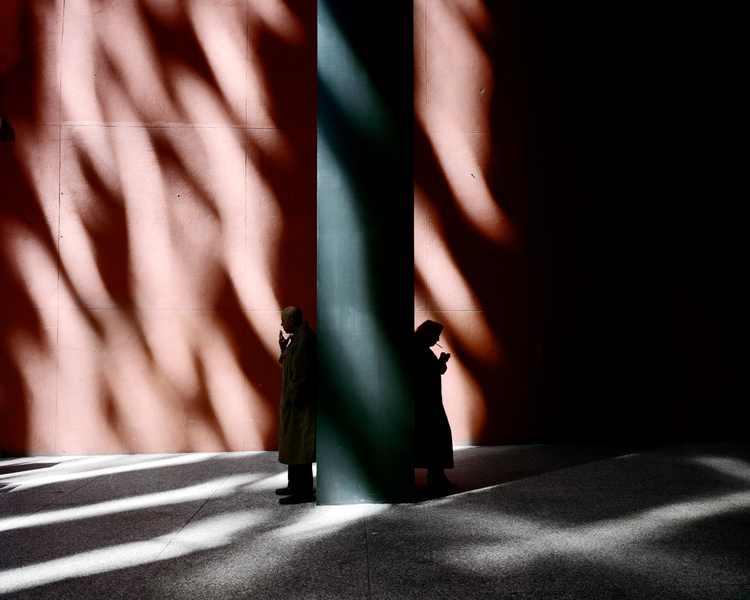 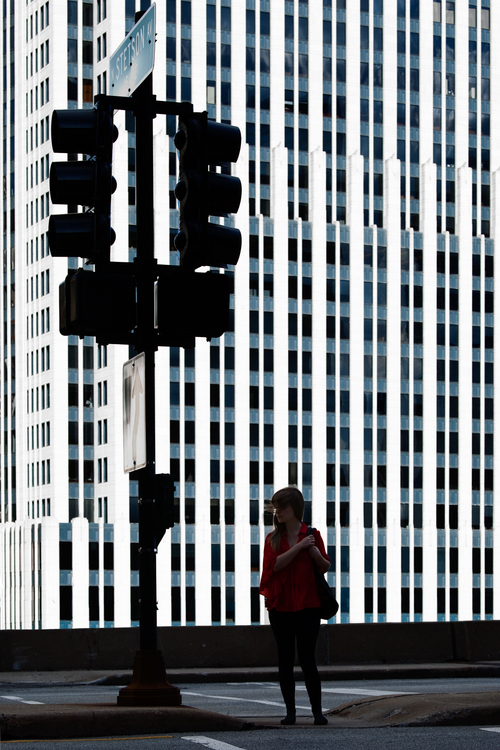 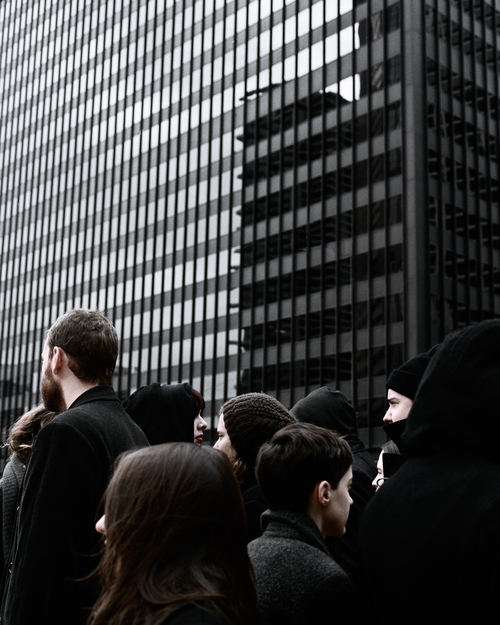 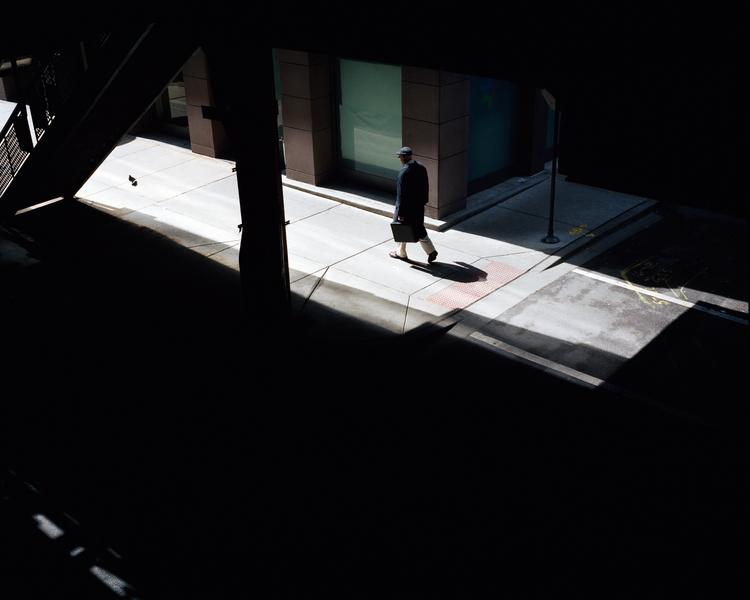 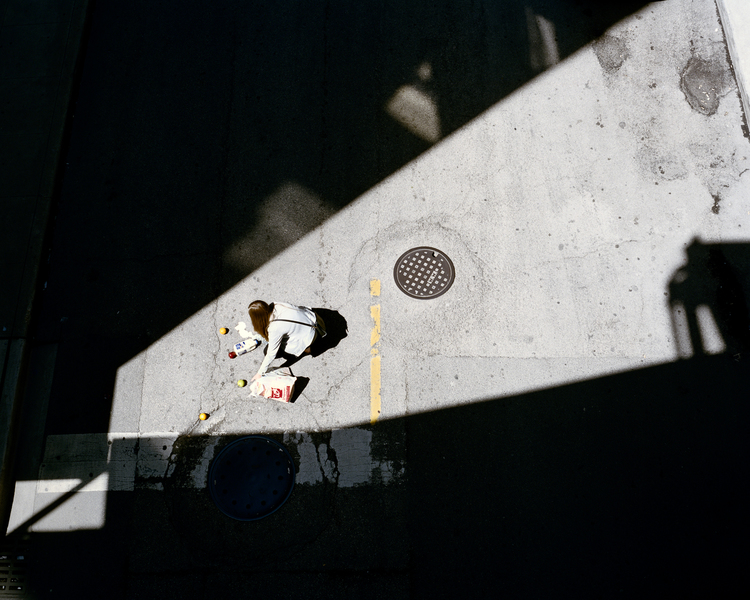 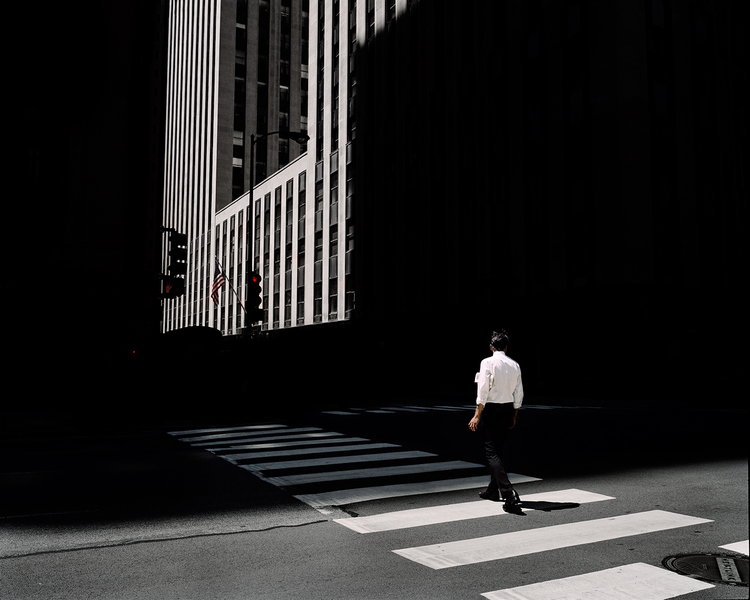 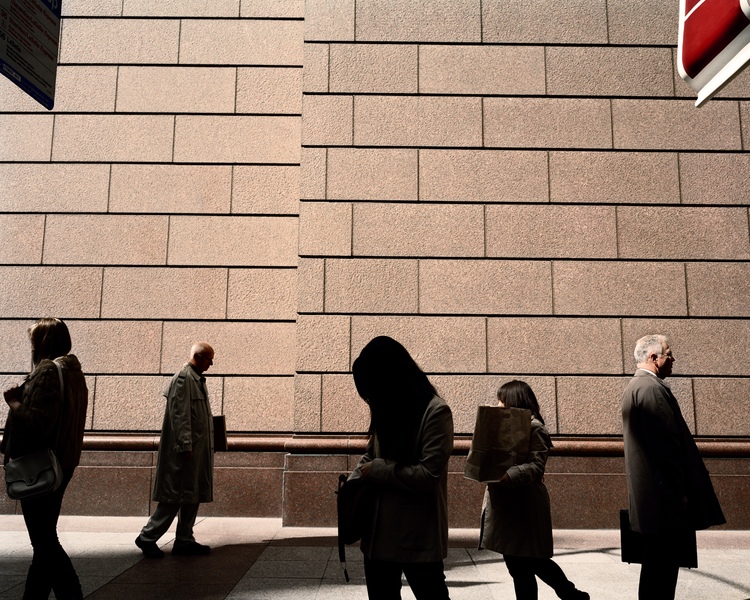 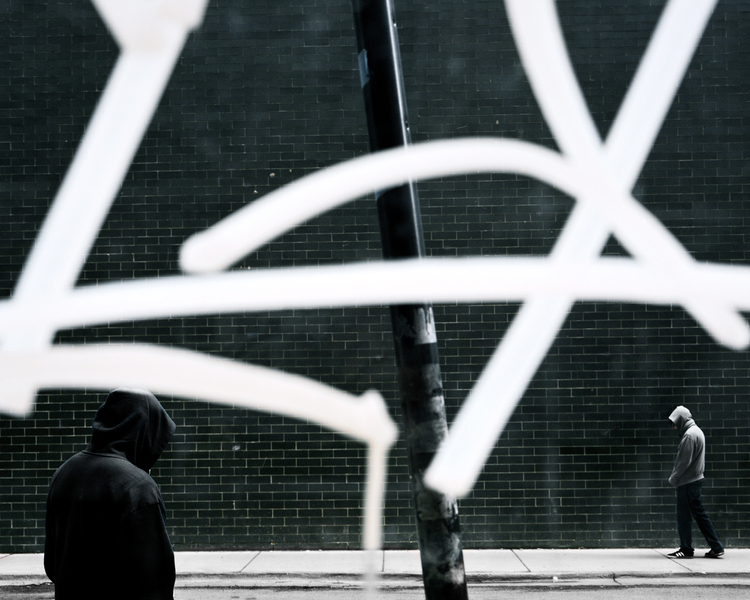 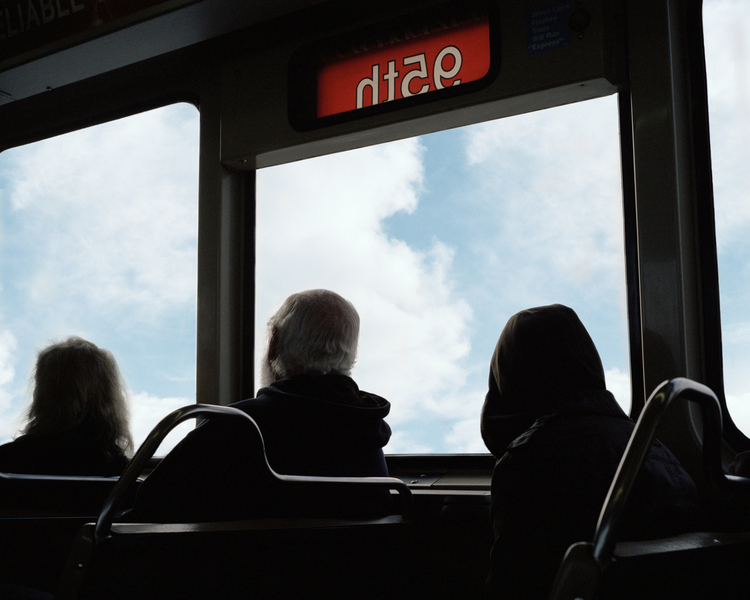 American photographer Clarissa Bonet was born and raised in Tampa, Florida but she’s been living and working in Chicago for the past five years. In the streets of Chicago is set her latest project City Space, a series of images in which Clarissa recreates moments of everyday life she experienced in first person.

Hello Clarissa, thank you for being with us as our #PhotographerInResidence! What are your main interests as a photographer?

Thank you for having me. Currently, my work explores aspects of the urban space in both a physical and psychological context. I am interested in the transformative ability of the camera to change the world that we see into another world.

City Space is not exactly a series of street photographs but rather visual reconstructions of moments you personally witnessed in the streets of Chicago. How did you get the idea for this project?

I have worked within the directorial framework of photography since I started working with the medium as a teenager. It was the way in which I felt comfortable and best connected to the camera. I became interested in street photography when I was looking for artists whose work was about the urban environment, both in a physical and psychological way. A few key street photographers’ work stood out and aligned with my perceptions of the urban space. The idea of pedestrianism was an important aspect of urban living that was really highlighted in the work of street photographers.

After much research I started to break down the visual language of street photographers -such as camera placement, the use of light and shadow – to create both a stage and mood that can give insight into my perception of the environment and its inhabitants. Then I used these tools to speak to my perceptions of the urban space.

In most of the City Space photos there is not much going on. What impressed you about those scenes in the first place?

As a Florida native, I was used to lush tropical landscapes, a beautiful climate all around the year, and slow pace of life. Moving to Chicago in 2009 to attend graduate school at Columbia College Chicago was the first time I had lived anywhere other than Florida. The urban space was a completely foreign environment to me and I was instantly fascinated with it. The mundane tasks of everyday life as I knew them became completely new experiences. Everything from the way I commuted, bought my groceries, or even got lost in the morning crowd of people that flooded into the city for work.

One of the most significant changes was becoming a pedestrian: roaming the city’s surface and experiencing life in flux. My project City Space developed out of my fascination with this new foreign landscape.

Rooted in the actions of the pedestrian, my images are recreations of personal experiences or occurrences that I have witnessed in public. By recreating a scene rather than recording it as it happens, I charge the images with heightened drama and emotion. I am not interested in documenting the street, but rather depicting emotional and psychological experiences of the city life.

What are you trying to communicate with this body of work, and how did you try to convey your message photographically?

With City Space I am trying to give the viewer a glimpse of how I perceive the urban space; specifically, speaking to my experience of the physical space of the city, the looming buildings, rigid structures, and mysterious inhabitants that occupy the space alongside me. In turn, how all these aspects of the physical environment affect my perception of place and elicit a psychological response.

Each image in City Space is carefully constructed out of my personal experiences of the city. I wander the streets for hours at a time, observing life, making snapshots and taking notes. I am drawn to the beauty of everyday life, that which often goes unnoticed in the hustle bustle of the streets. I use light as a tool to transform the ordinary, and take note of the location and time of day when city streets are transformed by light into a stage. It is on this stage that my final images are made.

Did you have any particular reference or source of inspiration in mind while working on City Space?

City Spaces rethinks the genre of street photography, imaging it anew. By analyzing the work of street photographers like Saul Leiter and Ray Metzker I was able to decipher their photographic language and use it as a conceptual vehicle for my own work. Ray Metzker used light and shadow as a means to speak to the psychological space of the city. Saul Leiter was a quiet observer of his environment whose painterly sensibilities helped ground the viewer in space by use of camera angle. In addition, I would also look at the paintings of George Tooker and Edward Hopper. Although their work is very different, I was interested in how they would convey mood and point of view within their work.

With City Space I am not only imaging the city anew but am doing it with a new voice, one that echoes the past but is pushing toward the future; one with an ever-expanding notion of what the medium can be.

Is there any image that you deem particularly significant for this work?

I had attempted to make this image two times before I was successful. In the first two attempts the images just looked as if it was wet outside with occasional thin streaks of rain, but lacked the feeling of a storm. I was looking for a more powerful way to represent my personal experience as a pedestrian forced to deal with the environmental elements. A few weeks later I was in the passenger seat of a car driving through downtown during a rainstorm. I saw a woman walking down the street struggling with her umbrella, holding it firmly so it wouldn’t turn inside out from the wind. In that moment I took a snapshot with my camera phone through the car window. Small water drops formed in the foreground of the image giving it an overwhelming sense of the storm. I knew in that moment that I needed to enhance the atmospheric effect of the rain and it could be achieved through shooting through a window. Since then I have tried to take advantage of atmospheric conditions to further speak to the concept of the image.

Mention the skill that you think is fundamental for a photographer to have.

Patience. I often wait weeks to make an image because I want it to be shot under the proper lighting and weather conditions. That’s a little extreme, and I don’t think everyone should work like I do. But I do think it’s important to utilize the proper conditions whether that be light, location, or time of day that best fit the conceptual framework of your project. It’s important to think about how your work will come across to the viewer and if you are utilizing all the tools you can to convey your idea.

I’m interested in photographs from many different genres of photography. Overall I tend to be drawn to images with a touch of the surreal, ones in which the camera transforms the world before the lens into a whole new space. I’ve been attracted to Trent Parke’s work for some time and have recently purchased his book Minuets to Midnight, which is amazing! I also really enjoy the work of Viviane Sassen, Richard Mosse, and Mona Breede to name a few.

I really enjoy collecting and making jewelry. My grandfather was a collector of many things and I have inherited his passion for collecting. Often when I travel I forget to take photographs. I think that’s because I like to experience new things without looking through a lens. When I travel I like to bring back a piece of jewelry as a keepsake of that place. Often, if I can’t find a piece of jewelry I like while traveling, I seek out a beautiful stone and I make a piece of jewelry myself. My jewelry is a collection of small reminders of where I have been and the memories associated with those places.