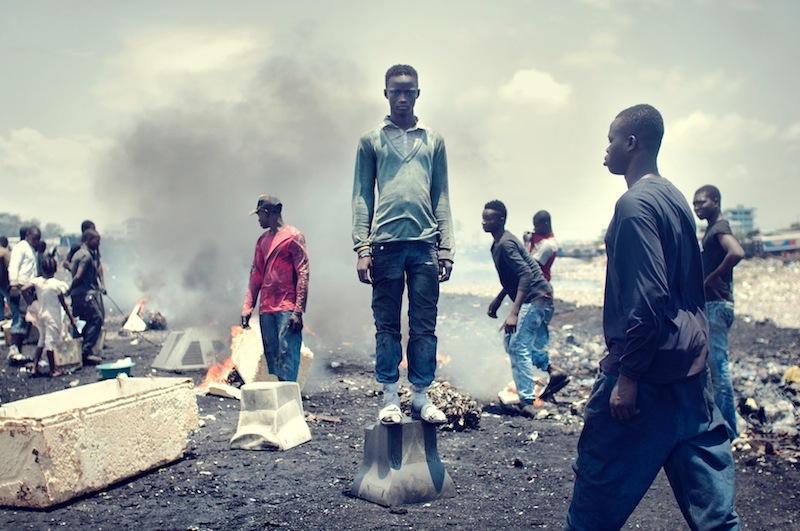 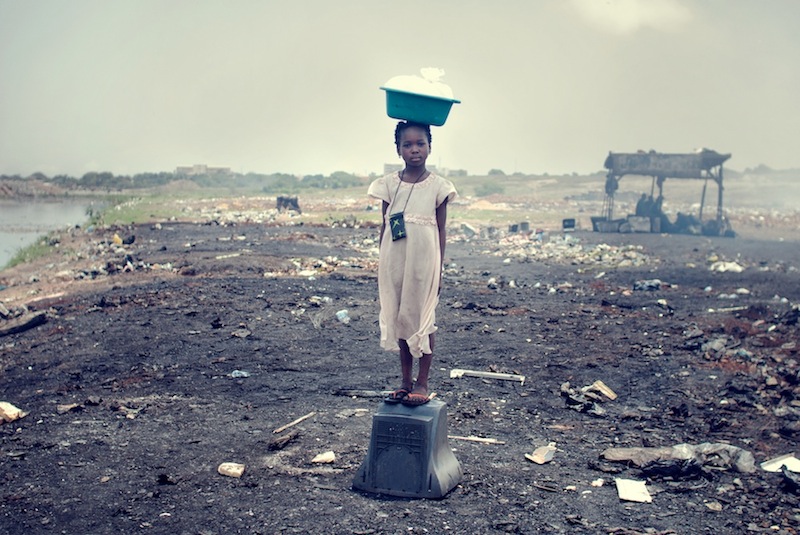 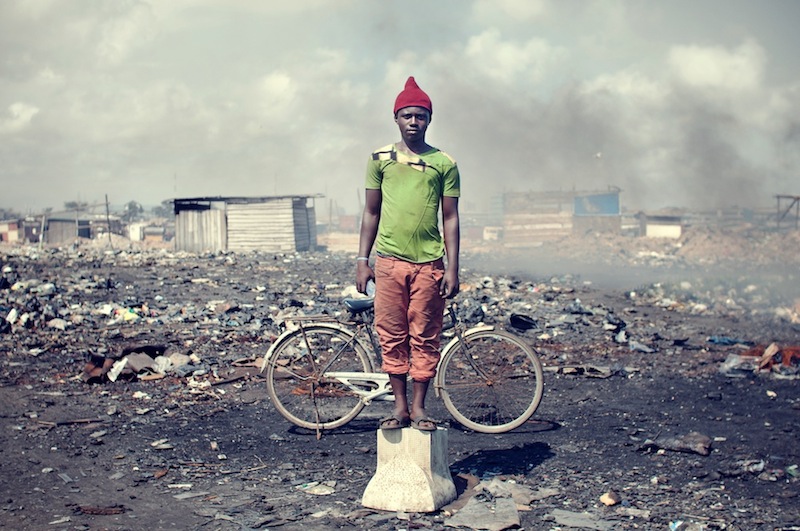 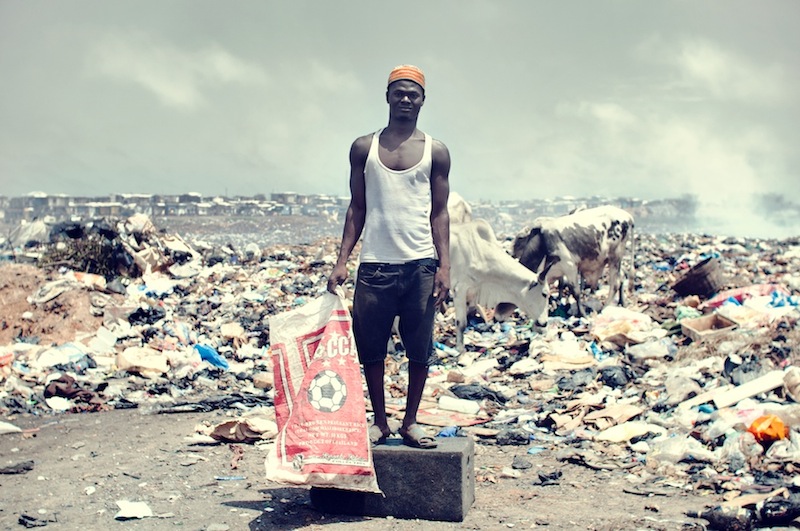 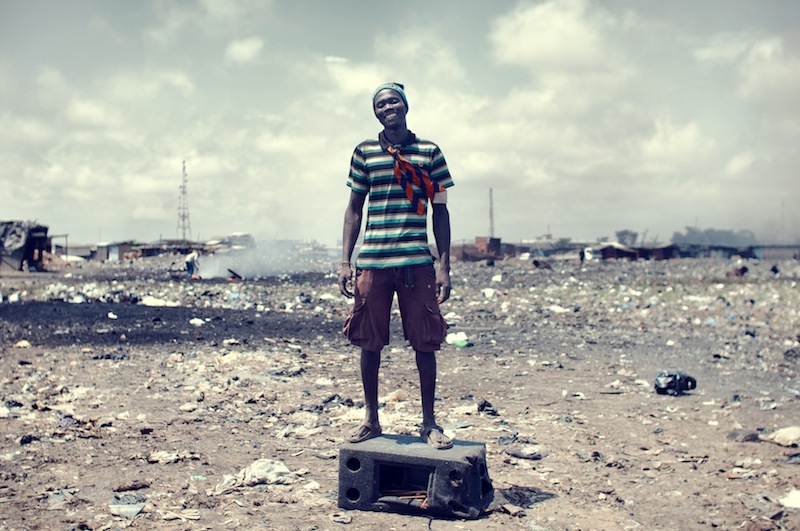 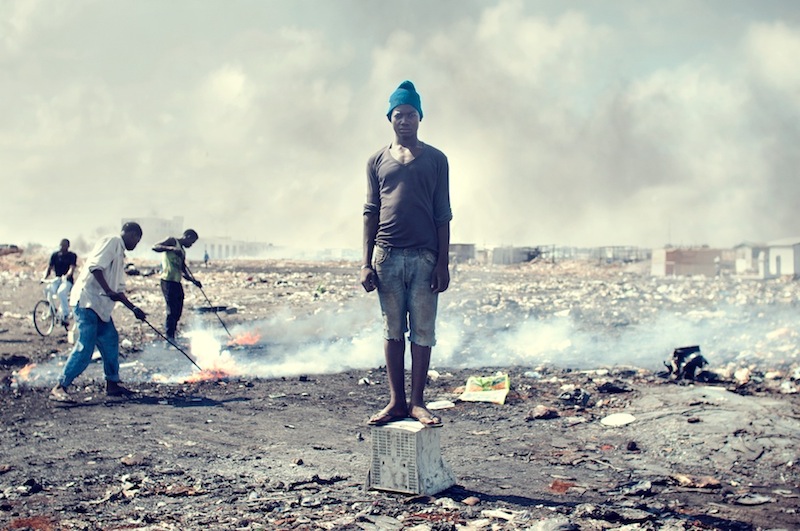 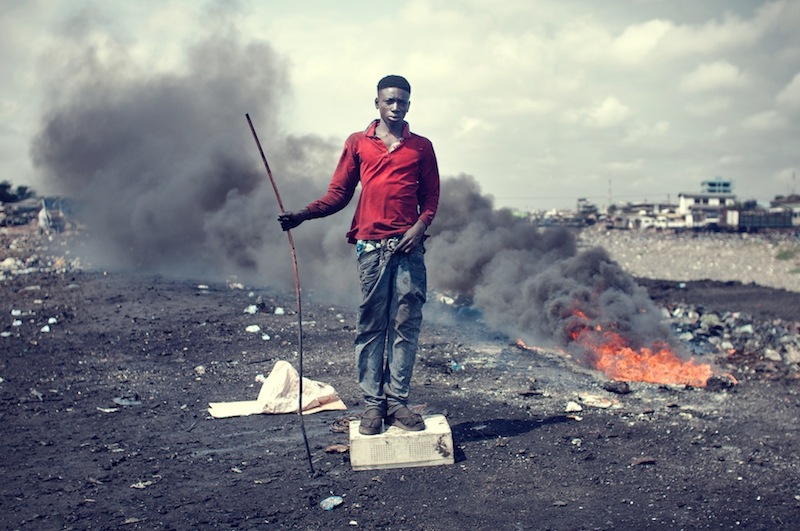 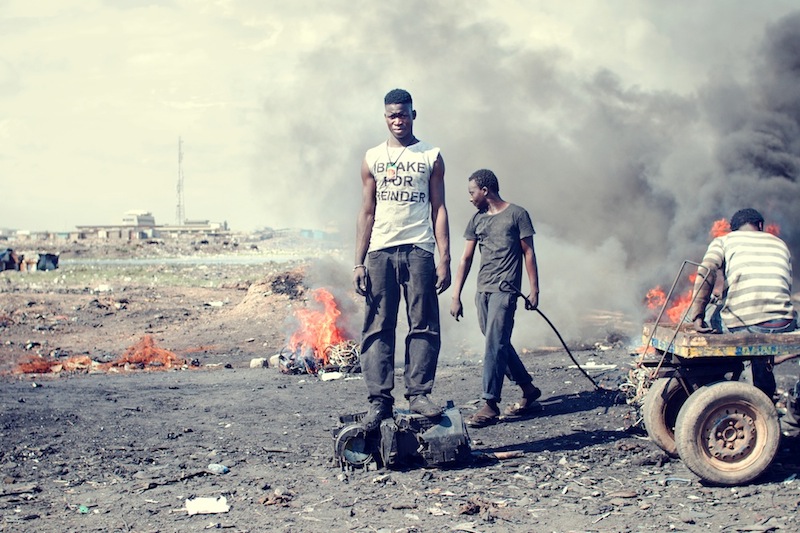 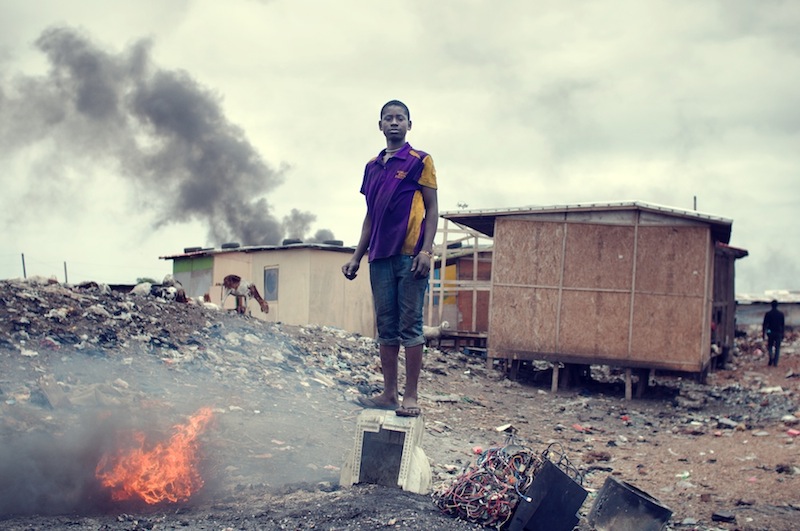 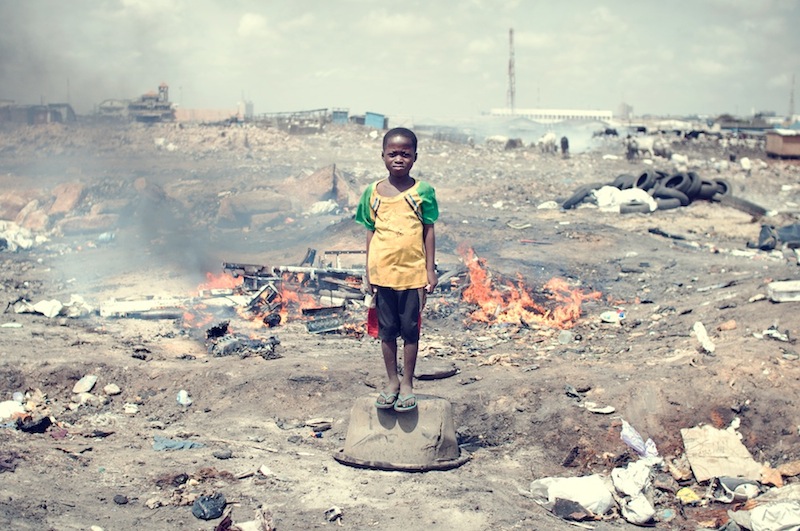 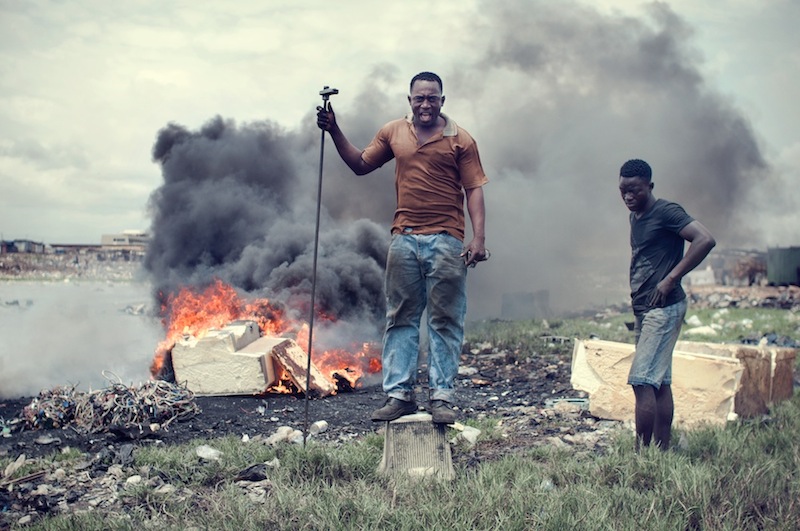 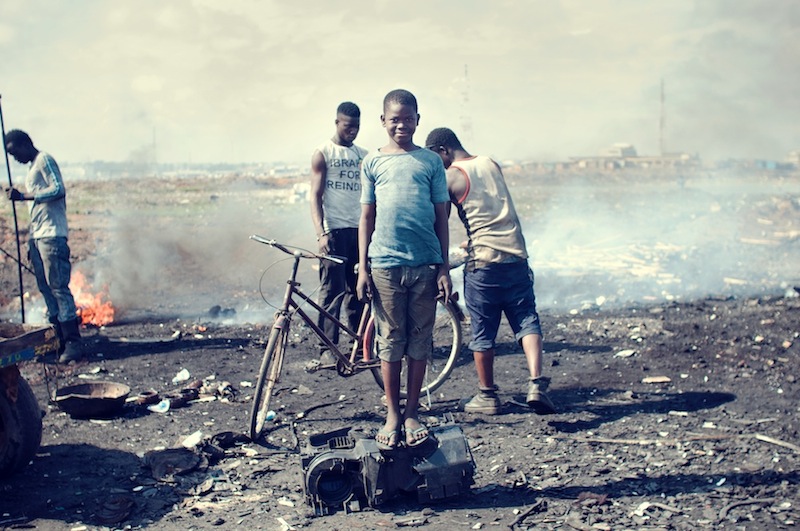 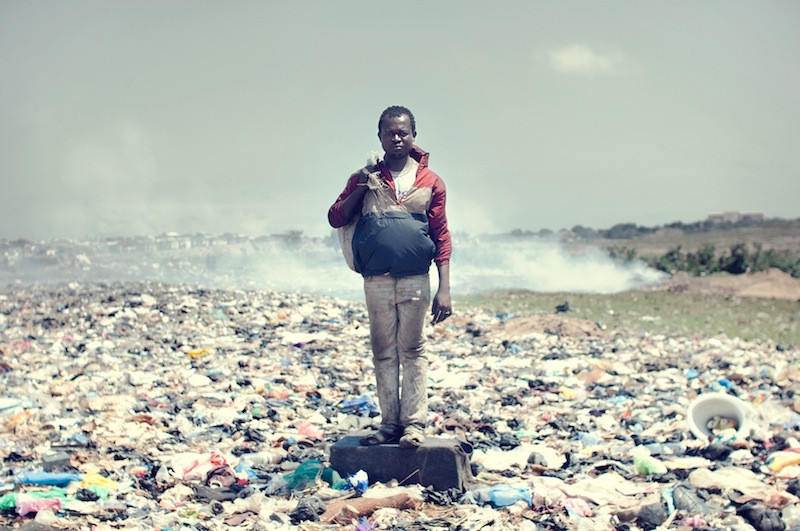 Yesterday we featured a photo essay about the young Chinese workers who build Apple’s iPhones in the infamous factory Foxconn. Today, we present a group of portraits of the young Ghanians who might be destroying those iPhones once they’re disposed of.

The portraits belong to Agbogbloshie, a work German photographer Kevin McElvaney made in one of the world’s largest e-waste dumpsite.

Agbogbloshie is a wetland and former recreation area close to Accra (Ghana), which is surrounded by rivers that stream through a lagoon straight into the Atlantic Ocean.

Before you enter the burning fields of Agbogbloshie, you will recognise a huge market. On one side you can buy cheap local fruits and vegetables, on the other you will see loads of manufacturers and scrap dealers. Go to these scrap dealers and you will see men sitting on broken TVs smashing their hammers and simple tools against any kind of car parts, machines and electronic devices. Behind this area huge fires and enormous clouds of smoke dominate the landscape. Here most of the people are kids between the age of 7 and 25, who start their day at sunrise and end their work at sunset. This is the place where I took the above pictures. The 40.000 settlers themselves call this area ‘Sodom and Gomorrah’.

As a result of illegal exportation and fake labeled donations (development aid), this old lagoon became one of the biggest e-waste dumpsites. Computers, monitors, refrigerators, hi-fi systems, video players and other electronic devices are stacked everywhere.

I spent four days in this area and met hundreds of young boys and girls. Most of them told me that they come from the poor north, where many bad harvests in a row forced them to travel to this place to earn money – most times on their own, without their parents. Here they start collecting metal with magnets from old speakers, disassemble monitors and burn cables to get the copper out of it. Copper is some kind of gold in this place. Injuries like sears, untreated wounds, lung problems, eye and back damages go side by side with chronic nausea, anorexia, heavy headaches, respiratory problems and almost everyone is suffering from insomnia. If you stand next to them, you can see that some of them have red eyes, shake all the time, can not concentrate, scratch themselves and seem restless. Same happened to me after a few hours. This happens because the electronic devices are full of highly toxic chemicals. Some kids inhale or touch them, unsuspecting.

You can see small bridges built with monitors, towers made out of keyboards and puddles filled with liquids that pour out of old refrigerators. All these products are difficult and/or expensive to dispose (or can’t be recycled). That’s the reason why they end up here.

Some boys are careful and know about the risks, others don’t know and walk around in flip-flops, others know about the consequences but don’t care anymore. One of those I met was Idris Zakarias (20). He just said: ‘What you do to get money is what kills you…’ and continued to poke with a stick in his fire, where he burnt cables, small electro engines and capacitators, which exploded a few times while I was standing next to him. This was everyday life; he has to take the risk of deep scars in his face and arms.

Another one was Mohammed Camara (20). He came from the Ivory Coast to Agbogbloshie and told me that this was the place where he wanted to be, the reason why he travelled so far. He had just arrived a few days earlier and started his ‘career’ by searching for tins in the food waste. I wondered why he was satisfied with his situation; he told me that because of civil war in his homeland he lost his mom, dad and brother and decided to come here, rather than fighting and maybe dying out there.

All in all I left this place with mixed feelings… I feel sorry for what happens there, how they have to live and the terrible stories they have to tell. But somehow it feels wrong to walk around there with a sad face, because there are still kids playing and dancing around, and tell you stories about their plans for the future. Most boys work together in groups, and help each other like a family. Many of them try to forget the sad parts in their story and focus on their opportunities, which was wonderful to hear, but I had some facts in the back of my mind.

Most of them will die from cancer in their 20s and grow up without education. Instead of working here for a few weeks, earn some money and leave the place as they expect, they often fall into this vicious circle of Agbogbloshie: when they have enough money, they often get sick and have to spend it on medicine, sleeping pills and food. To earn more money, they resume working here again and again, until they are eventually not able to leave this place and start their dream.

So this work seems wrong, but today there is no alternative in this region. Burning cables and electronic waste became a livelihood for many people there and it is expected that  e-waste exports to Ghana will double by 2020. On top of that, Agbogbloshie has existed for more than 10 years now, so many kids grow up here and call this their home now.

Agbogbloshie is a social-economic and environmental disaster.

Find out more about Agbogbloshie on Kevin McElvaney’s Facebook page.