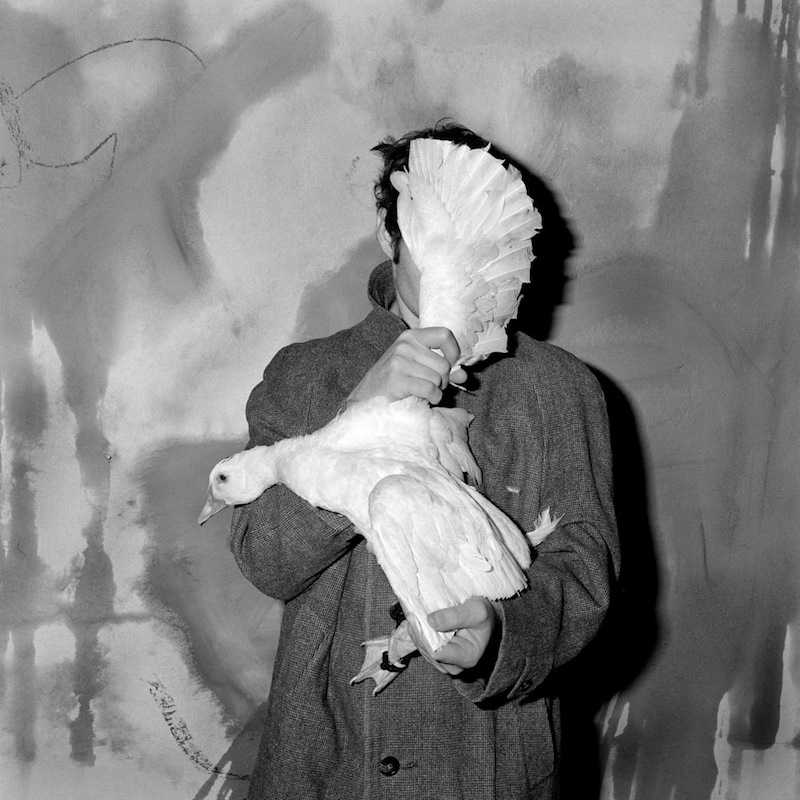 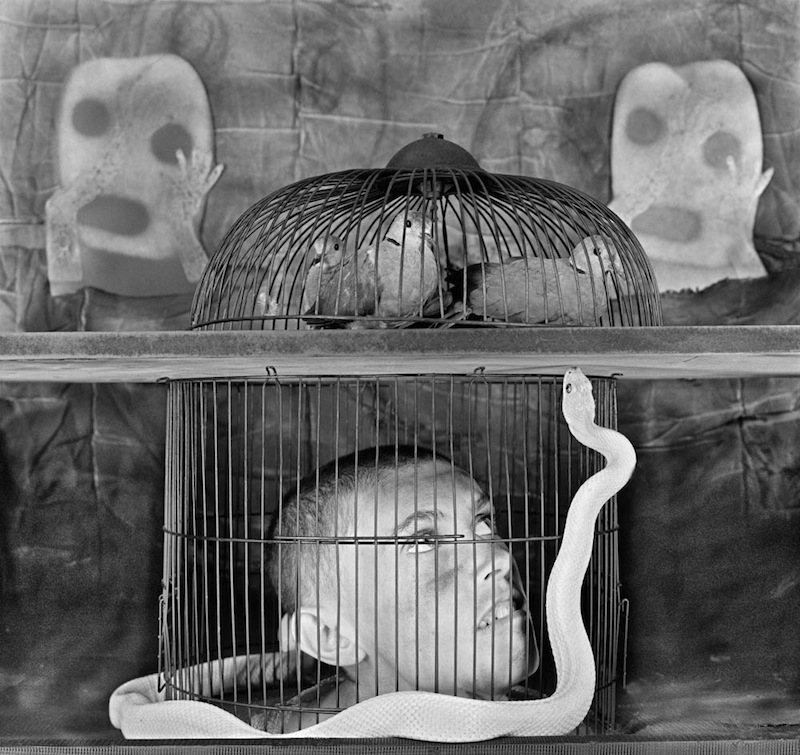 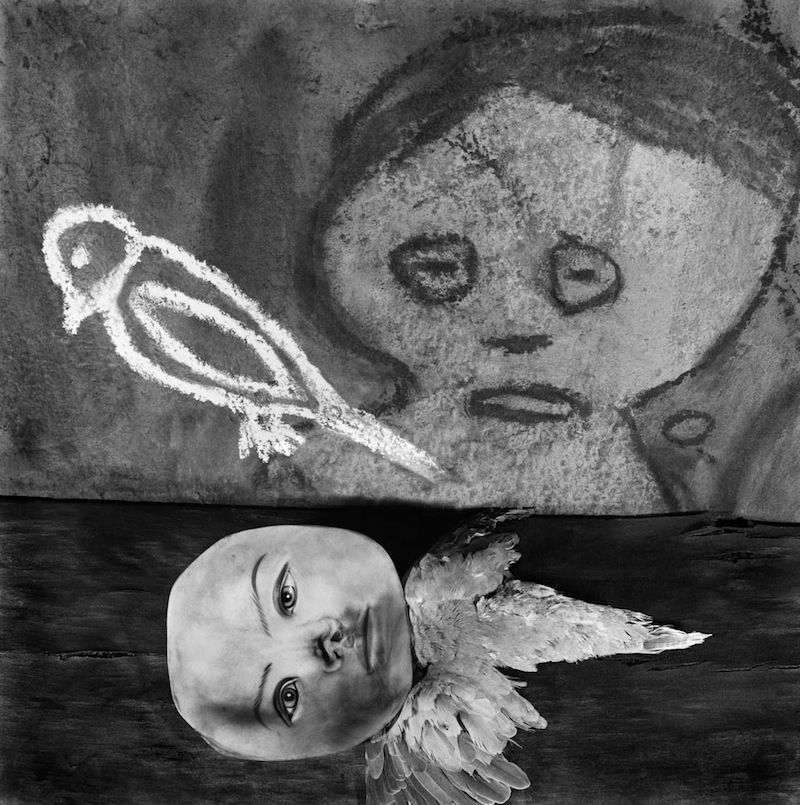 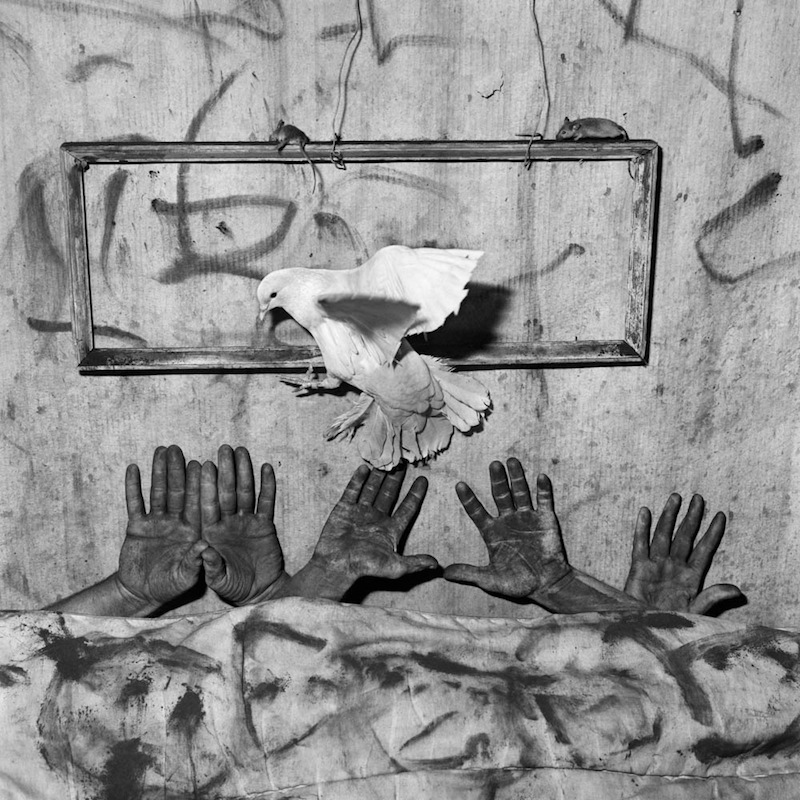 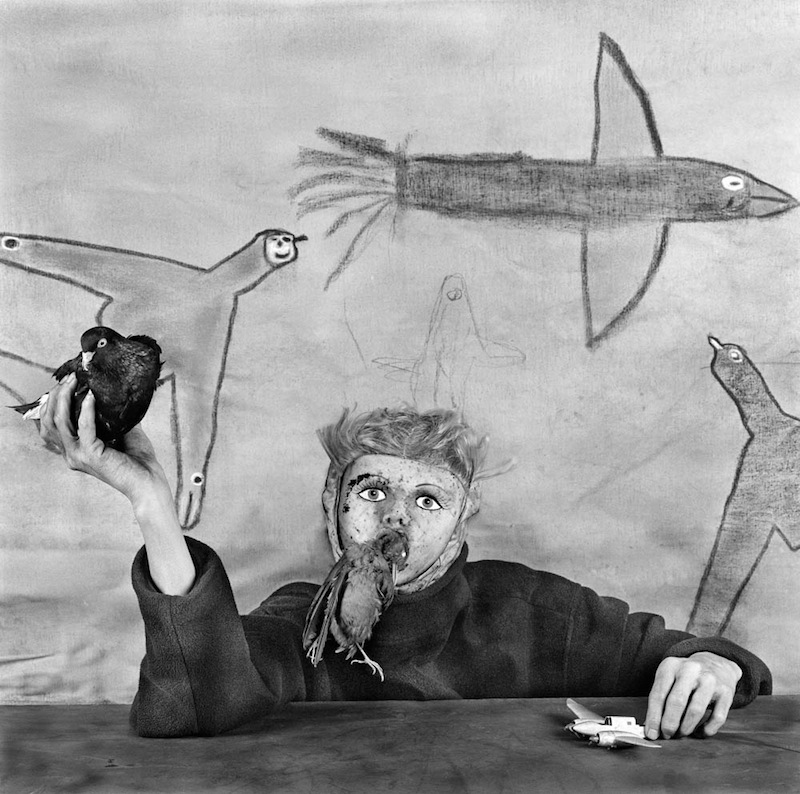 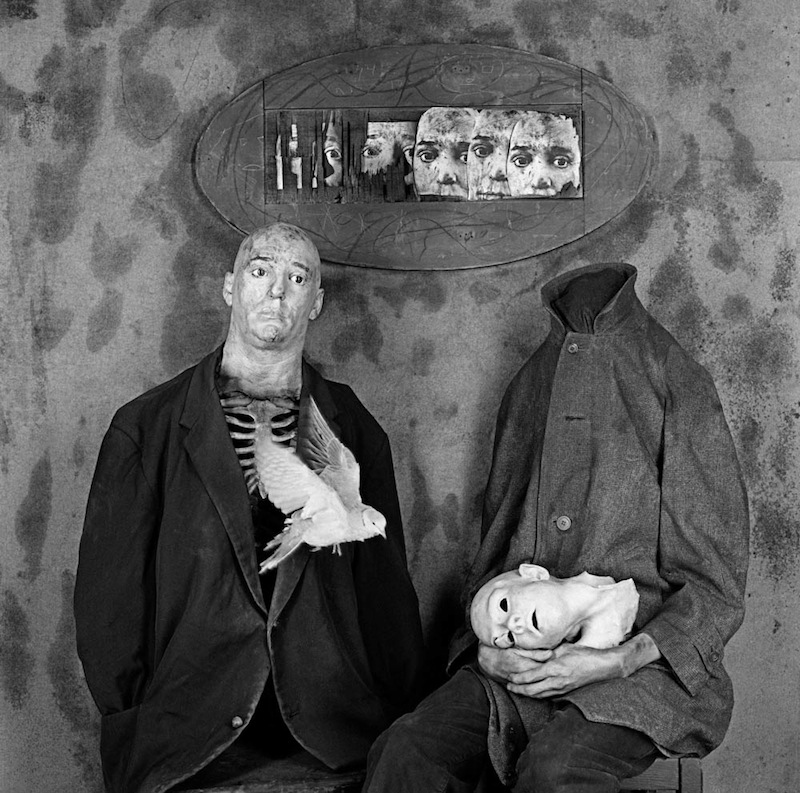 You are forewarned: if you are not familiar with the work of Roger Ballen, one of the greatest image-makers of our time, you might want to stop before delving deeper into his oeuvre. Ballen’s is the kind of art you either love or hate. Many love it, and us among them; many others find it unsettling, disturbing, maybe even creepy.

It wasn’t always so. Ballen was originally a documentary photographer, and actually photographed on the side of working as a geologist. When his pictures started gaining recognition, he finally ditched his full-time job to dedicate himself completely to photography; but he didn’t stop digging. Through his eerie humanly figures blended with dark drawings, Ballen forces us to look deeper into ourselves, and rolls down the rabbit hole of his own mind at the same time.

For his latest work, Asylum of the Birds, Ballen has chosen as the set for his images a shelter for homeless individuals in Johannesburg, South Africa, where he has long been based. Here, war refugees, immigrants, vagabonds and other marginalized individuals share the living space with uncaged animals, and especially hundreds of birds.

The Asylum of the Birds series is showcased in a photobook with the same title, published by Thames&Hudson – see here for details about the book. And good news for his Italian fans: an exhibition of Asylum of the Birds is scheduled to open in MACRO next 25 September.

And now, the word to Roger Ballen.

Hello Mr. Ballen, thank you very much for this interview, and thank you for challenging us once again with your latest body of work, Asylum of the Birds. How did you discover this place in Johannesburg? And how did you gain the trust of its inhabitants?

I first found the Asylum of the Birds house in 2001 during the time I was working on the Shadow Chamber project. A number of people that I was photographing during this time mentioned this location. As time progressed, I began to get to know the people and the man who owned the building.

Your work seems to draw heavily on the world of children, but to construct a nightmarish reality. Such is the case for the eerie drawings, the monstrous figures and the animals deprived of their cute allure. What were you like as a child?

My first book that I published was titled Boyhood (1978), and in this publication I travelled by land from Cairo to Cape Town and Istanbul to New Guinea to discover my boyhood through photographing other boys.

I grew up in an middle class environment outside New York city. As I think back to my childhood I was always very impassioned by nature; its beauty and purity; feeling deep empathy towards animals and the natural world.

You started out as a documentary photographer, portraying the individuals on the fringes of South-African society. How much did your connections with Magnum Photos [Ballen’s mother used to work at the agency’s branch in New York, and photographers of the likes of Henri Cartier-Bresson visited his house] influence your early career?

Many of the most important photographers of the 1960’s and 70’s were Magnum photographers. Our home was a frequent stop for many of the individuals working at the Agency and my mother owned their books and photographs. I believe that had my Mother not involved herself with Magnum; it is doubtful I would have ended up being a photographer.

With time, you progressively incorporated a more artistic approach into your photography, which ended up prevailing. Is it safe to say that Asylum of the Birds has no documentary side to it at all?

Every photograph I take is documentary as it expresses one of the infinite aspects of myself.

On your Facebook page, you write: ‘Unlike my earlier images, human identities have been reduced to body parts; there is hardly a face to be seen in this book.’ Was this a conscious choice, or is it something you realized in the process of making Asylum of the Birds?

The changes in my photographs have occurred gradually over the passing of years. During the 1980’s and 90’s I felt that the non-portraiture aspects of my images were not given the attention that they deserved. I have always felt that a photograph should be like a living being in that every aspect contributes to a large whole.

Beginning in 2003, the human face abruptly disappeared from my images replaced by animals, drawings, and installation type settings.

Asylum of the Birds is also a short documentary film in which for the first time you are seen ‘behind the scenes’. How was the idea for the film born?

During the filming of the Die Antwoord film I fink u freeky I got to know Ben Crossman who worked on this set. Ben was an extremely creative, spontaneous person who felt a strong affinity to my work. We both agreed that it would be appropriate to create a film documenting me at work in Johannesburg and at the Asylum of the Birds House. Ben did an amazing job directing this film. My assistant, Marguerite Rossouw played a significant role in the film and in the creation of the images from the book.

Above is the short film Asylum of the Birds, directed by Ben Crossman. Find more information about the film on its dedicated website. The video below is the music clip for Die Antwoord’s song I fink u feeky, for which the South-African rap band collaborated with Roger Ballen.

One of the adjectives most frequently used to define your photography is ‘disturbing’. When asked about this, your custom reply is that people feel disturbed because your images compel the viewers to look at the dark side inside them. What do you think is this dark side exactly? Is it the evil side? Is it the repressed side?

The dark side is the part of the self that an individual fears to come grips with. It has nothing at all to do with evil; and being in contact with this part of consciousness can only benefit one’s sense of self.

Your photography clearly has a lot to do with psychology. Does it also serve as a self-exploration? What did you find out about yourself through your art?

My photographs have always been psychological in nature. Photography has been a tool to explore myself and the world around me. I know of no better method. After near fifty years of a taking photographs; I increasingly understand how complex and indefinable reality is.

Asylum of the Birds has been criticized as an exploitation of the men and women living there. How do you respond to that line of criticism?

What advancement does Asylum of the Birds mark in your artistic research?

Asylum of the Birds for me marks the culmination and maturation of Roger Ballen’s photographic aesthetic. I believe my photographs are unique in form and content and recognizable from other people’s work.

Please pick one of your images from Asylum of the Birds and share with us something we can’t see in the picture.

I was pleased to be able to show how I shot the cover to the Asylum of the Birds photograph in the video. It was an image that expressed my philosophy towards making images namely: “clear and precise forms and complex meaning.”

Is there any young photographer or artist you particularly like?

I find art wherever I go. You do not have to visit Museums or Galleries to view art.

Finally, what do you find disturbing in life?

That after sixty four years on planet earth, I know so little.