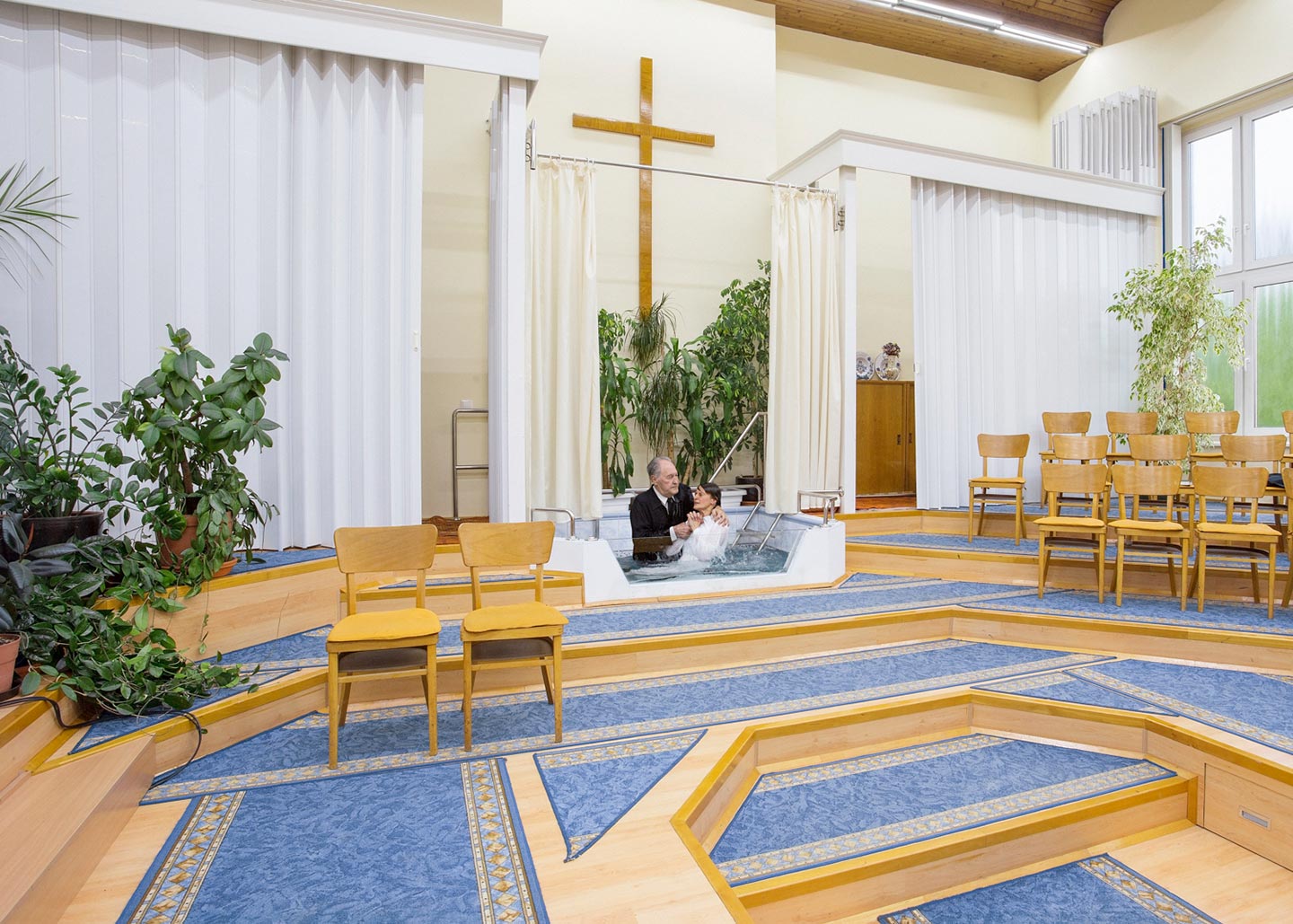 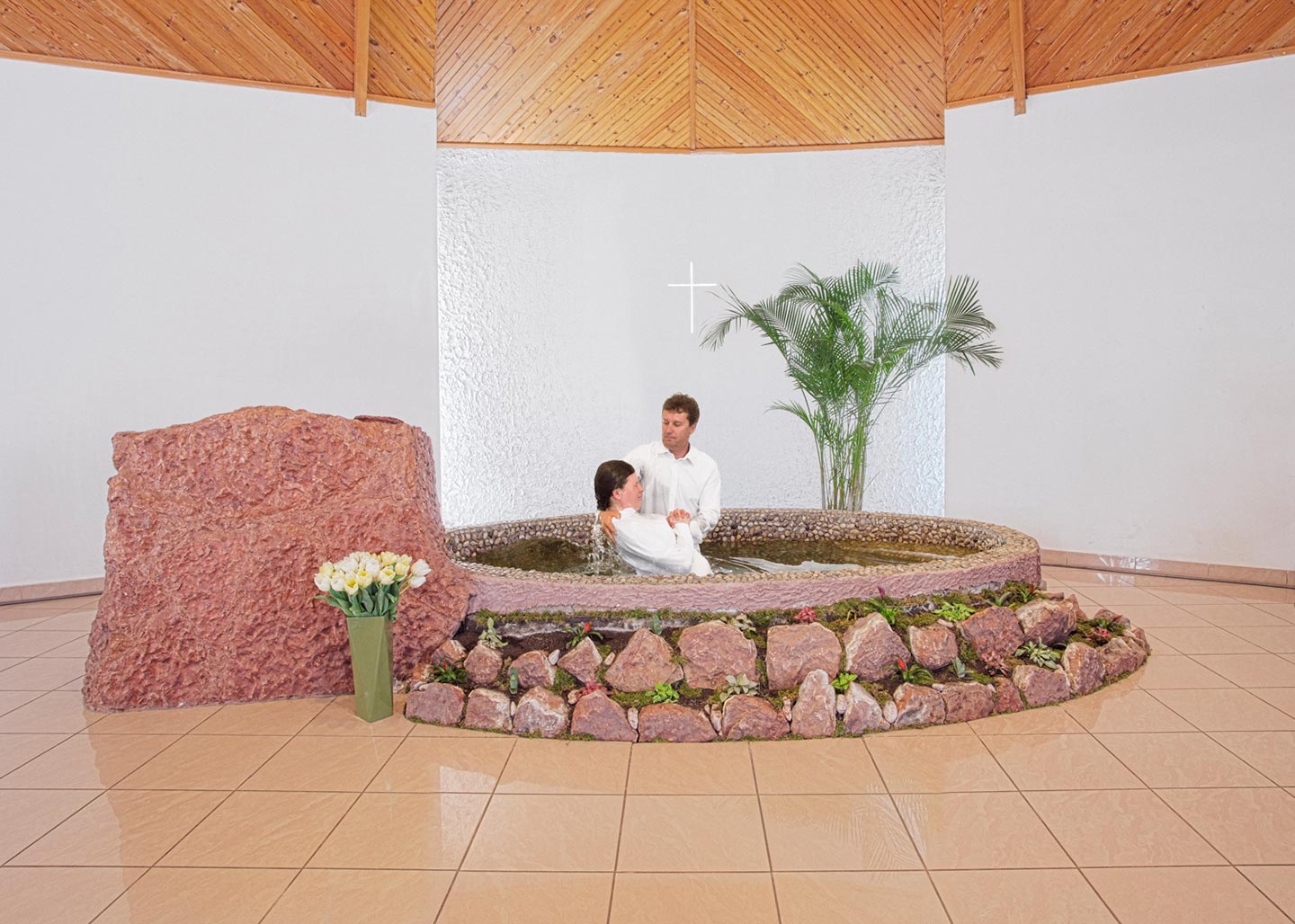 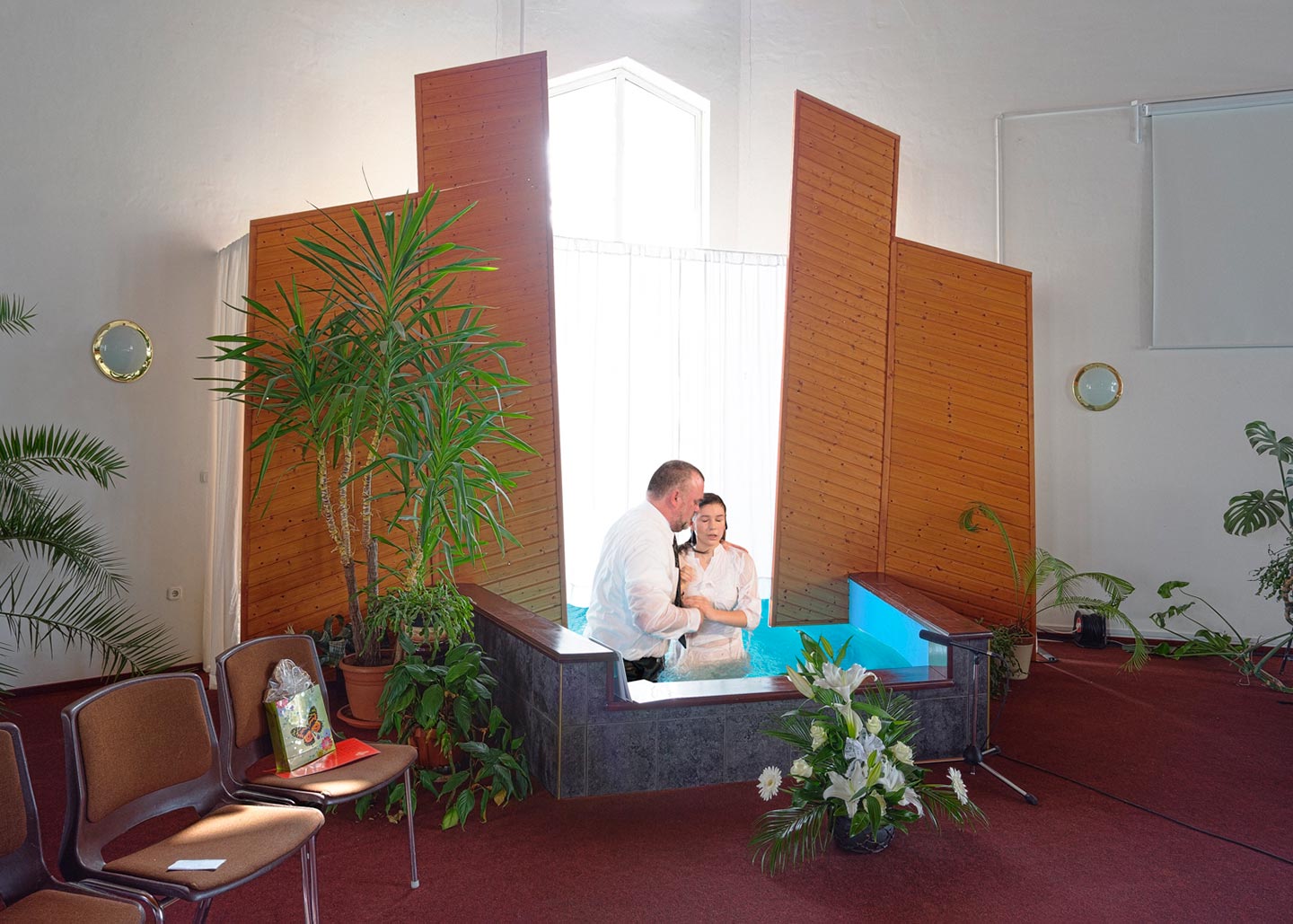 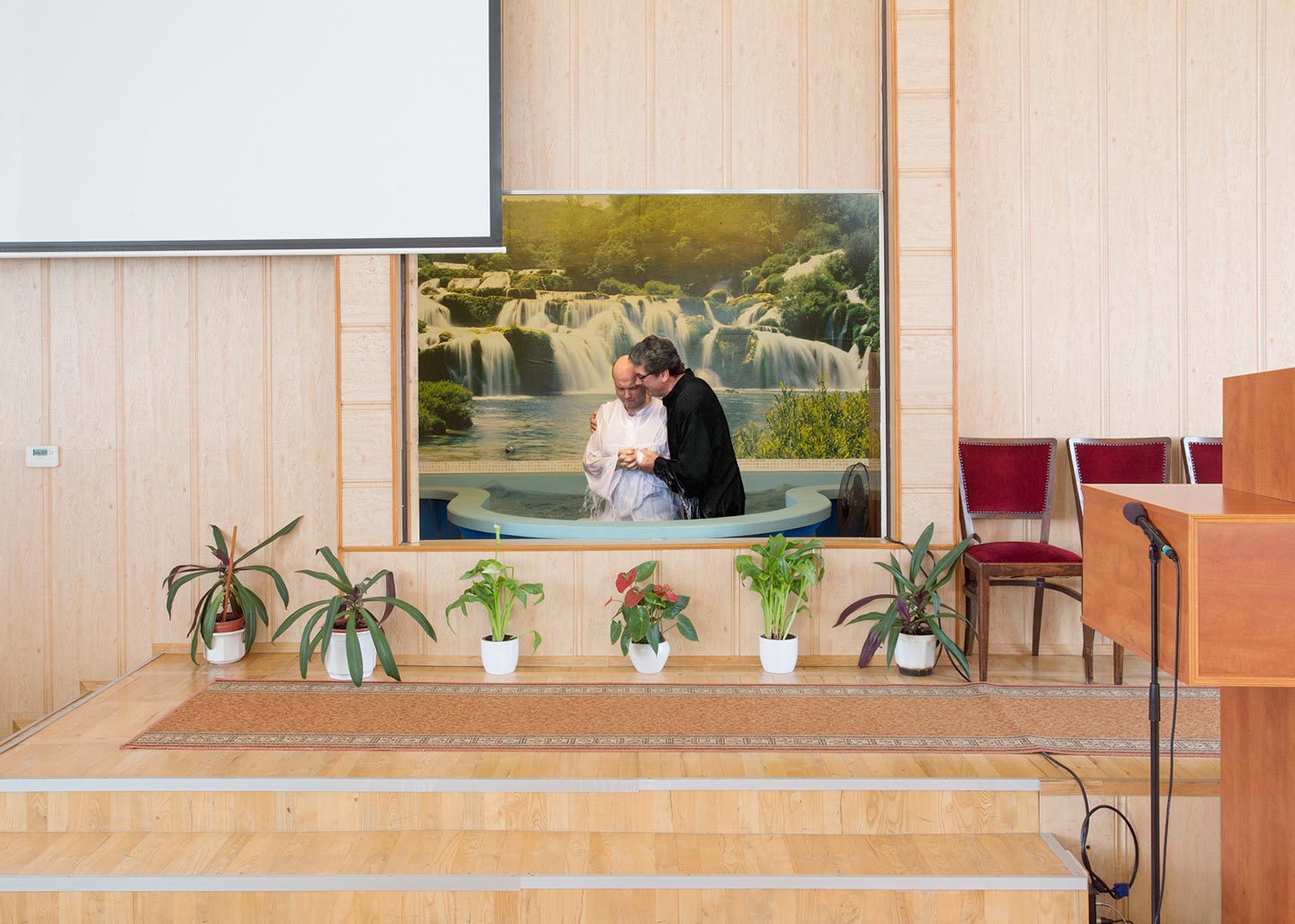 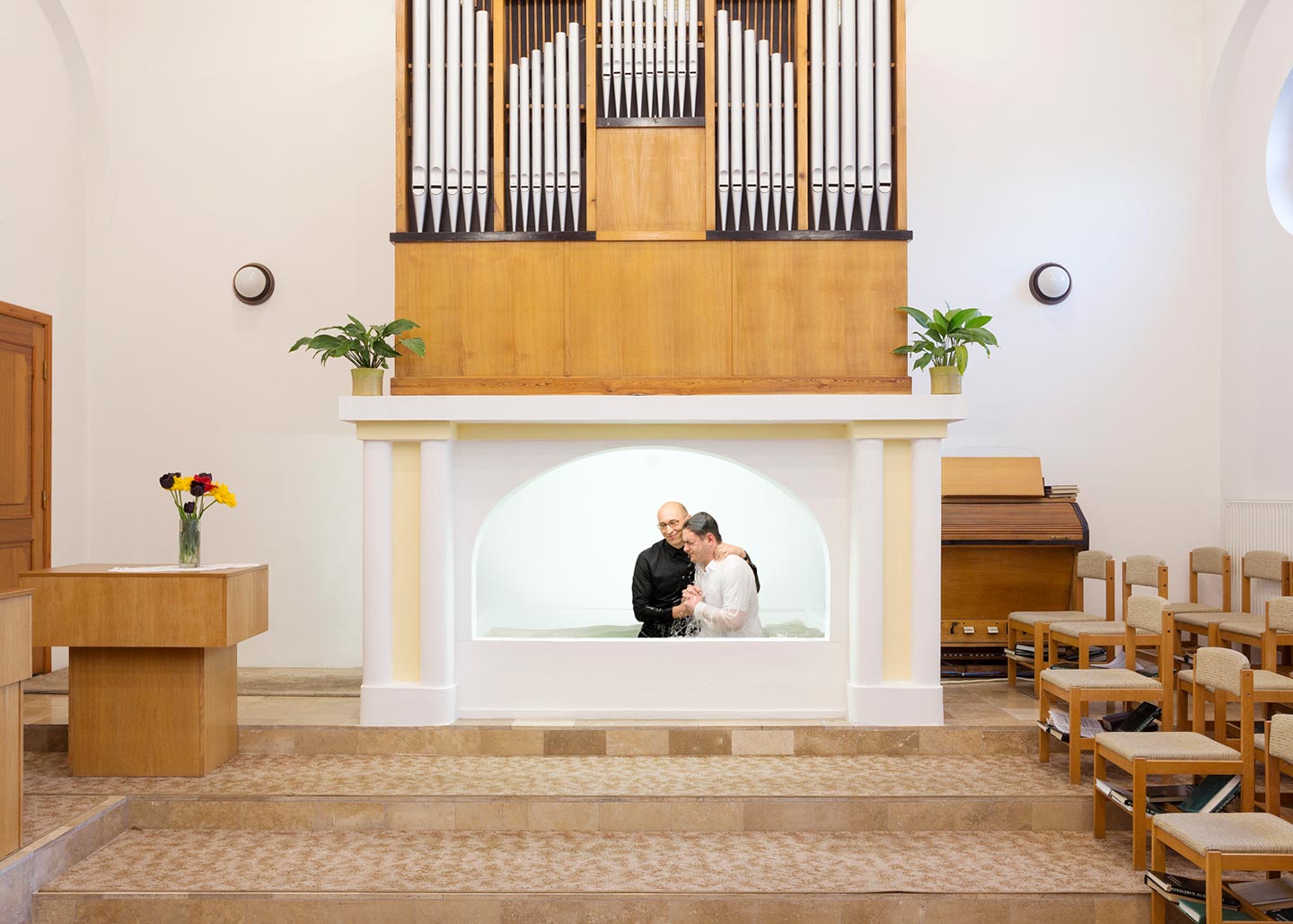 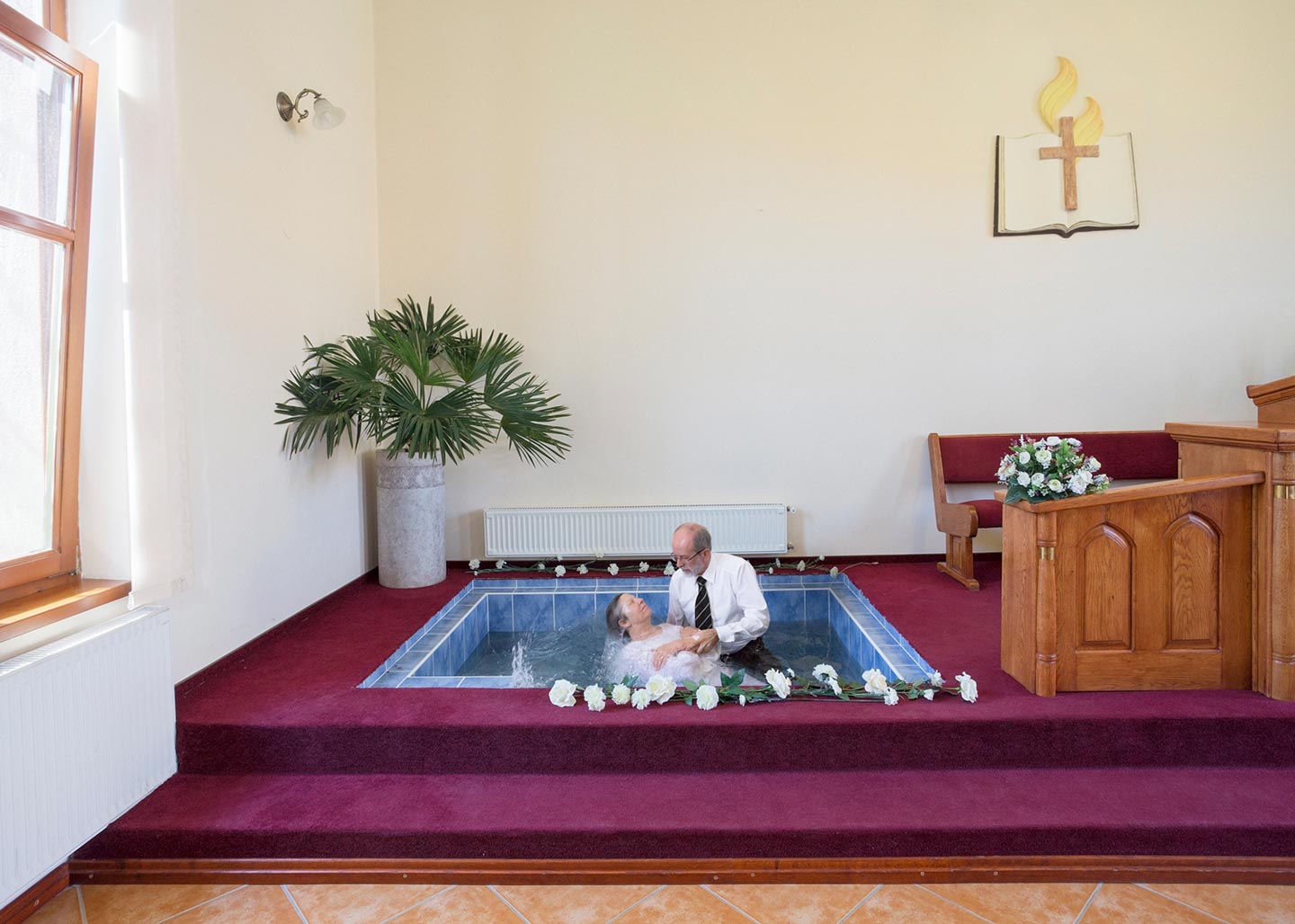 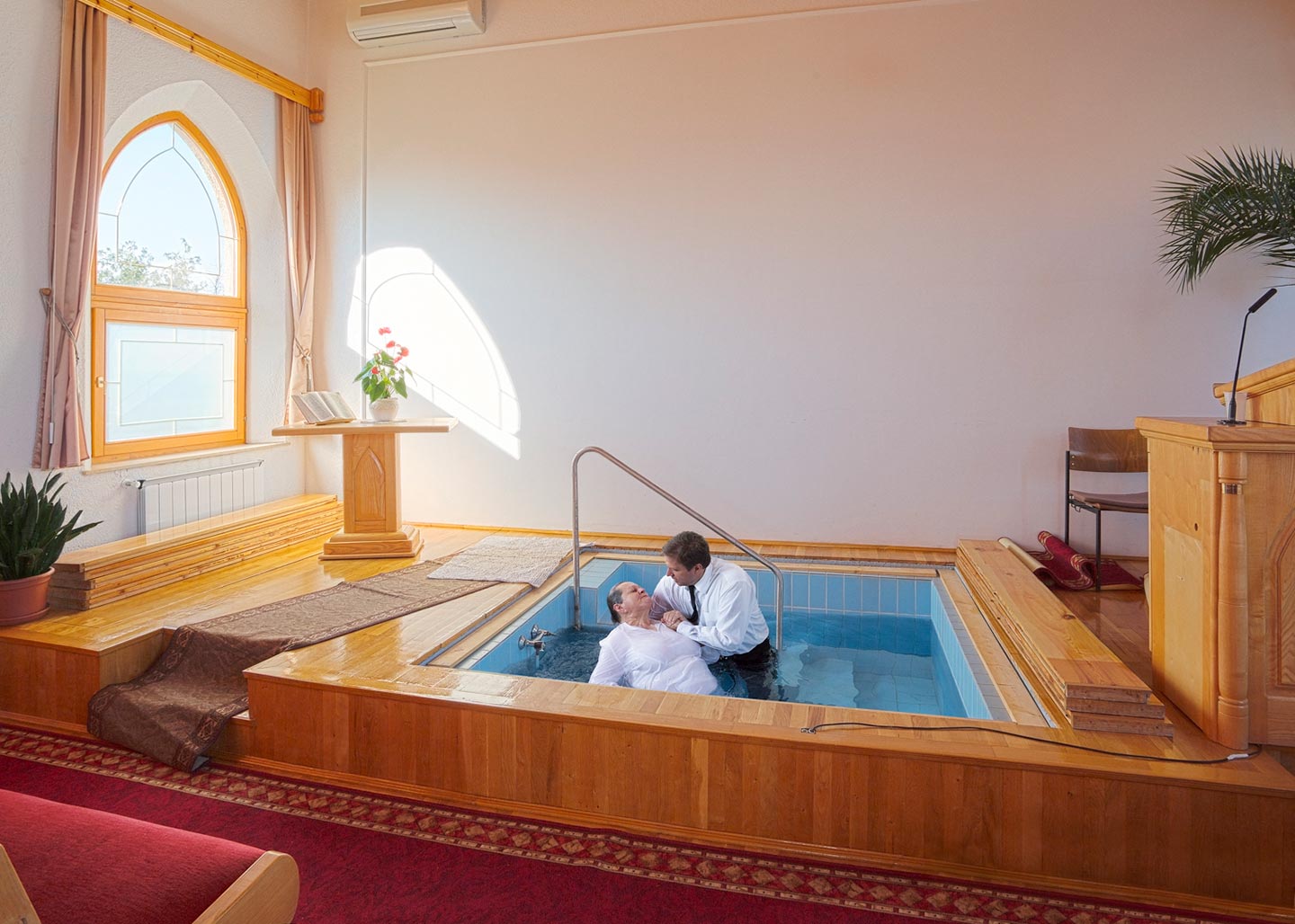 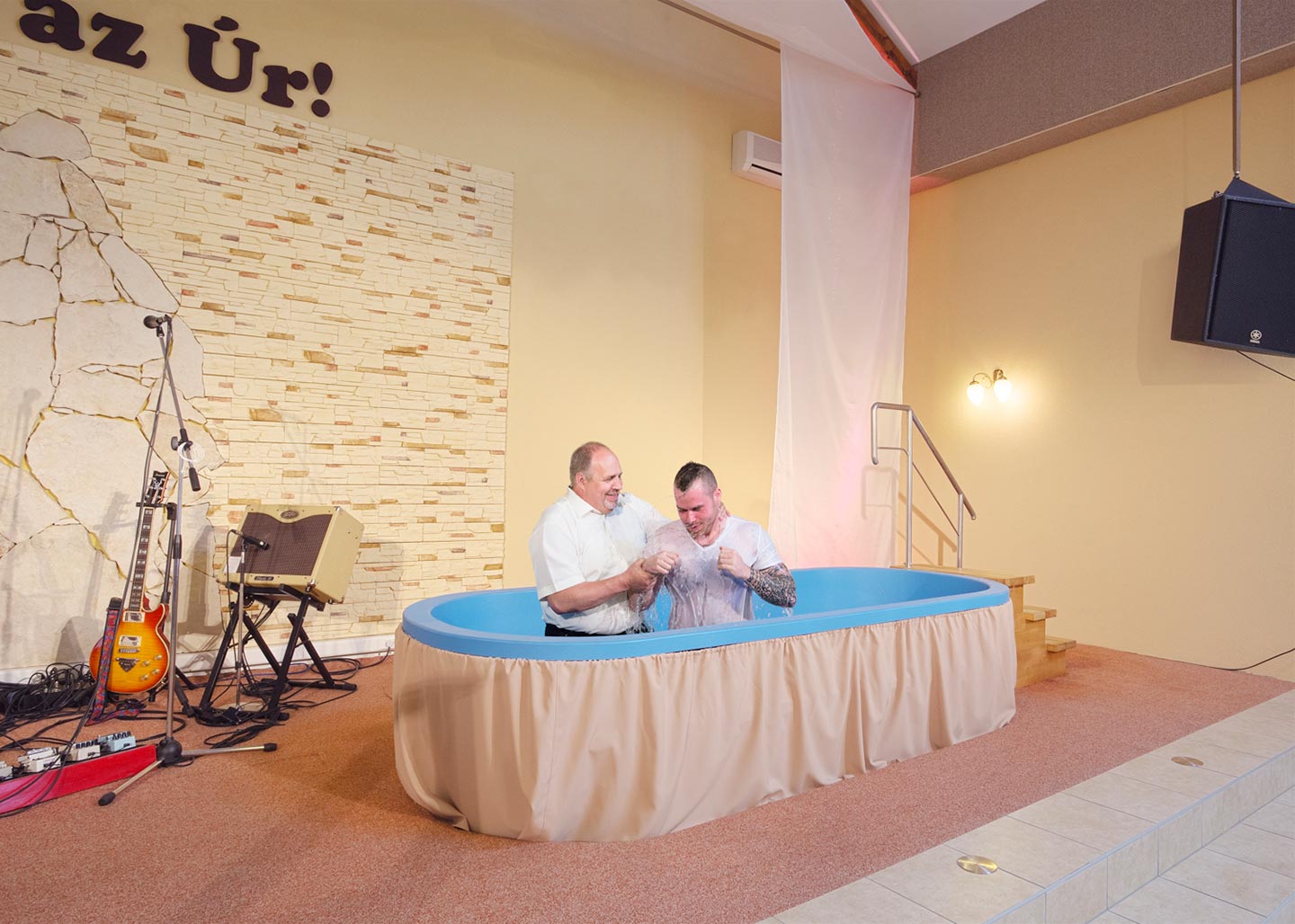 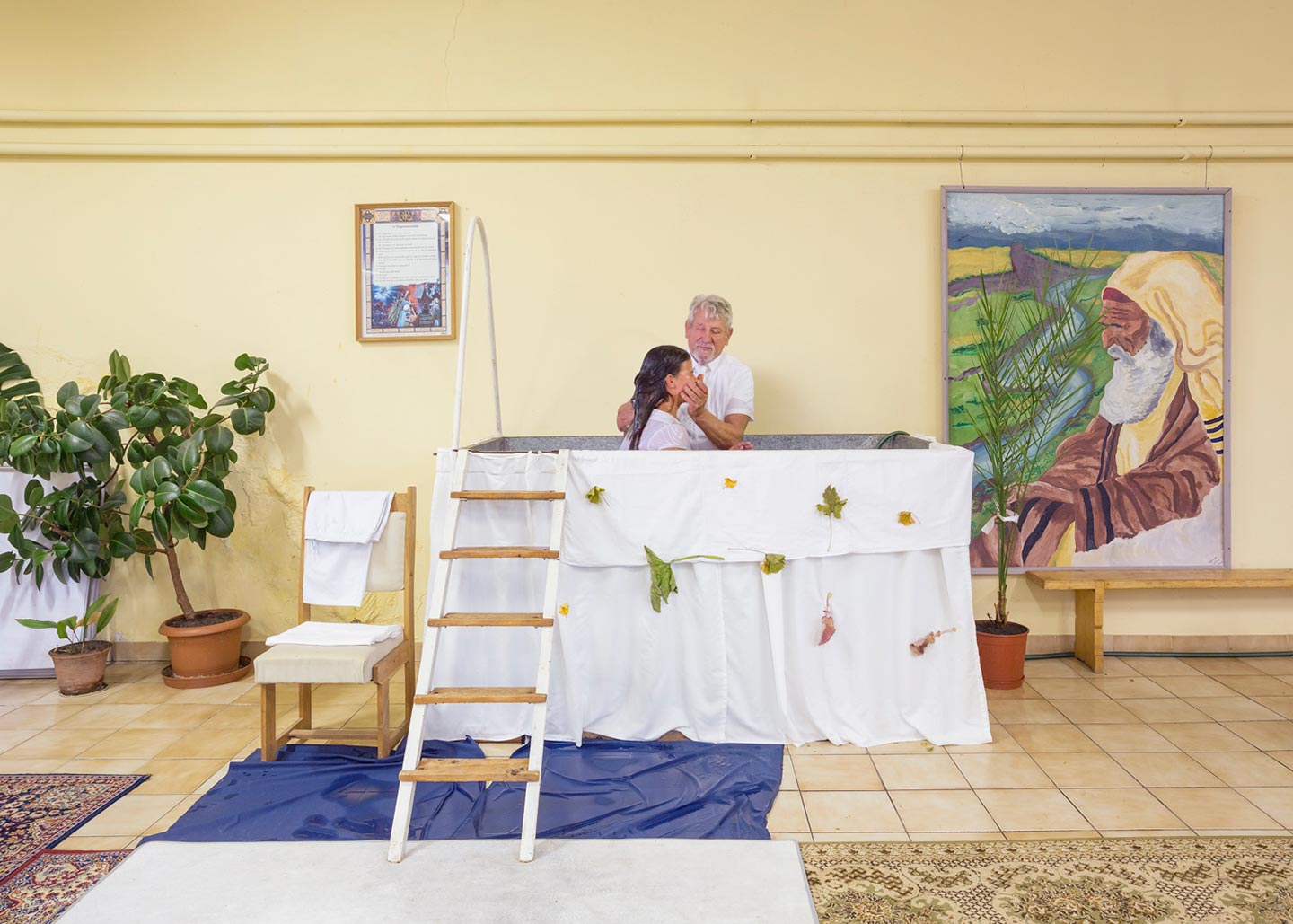 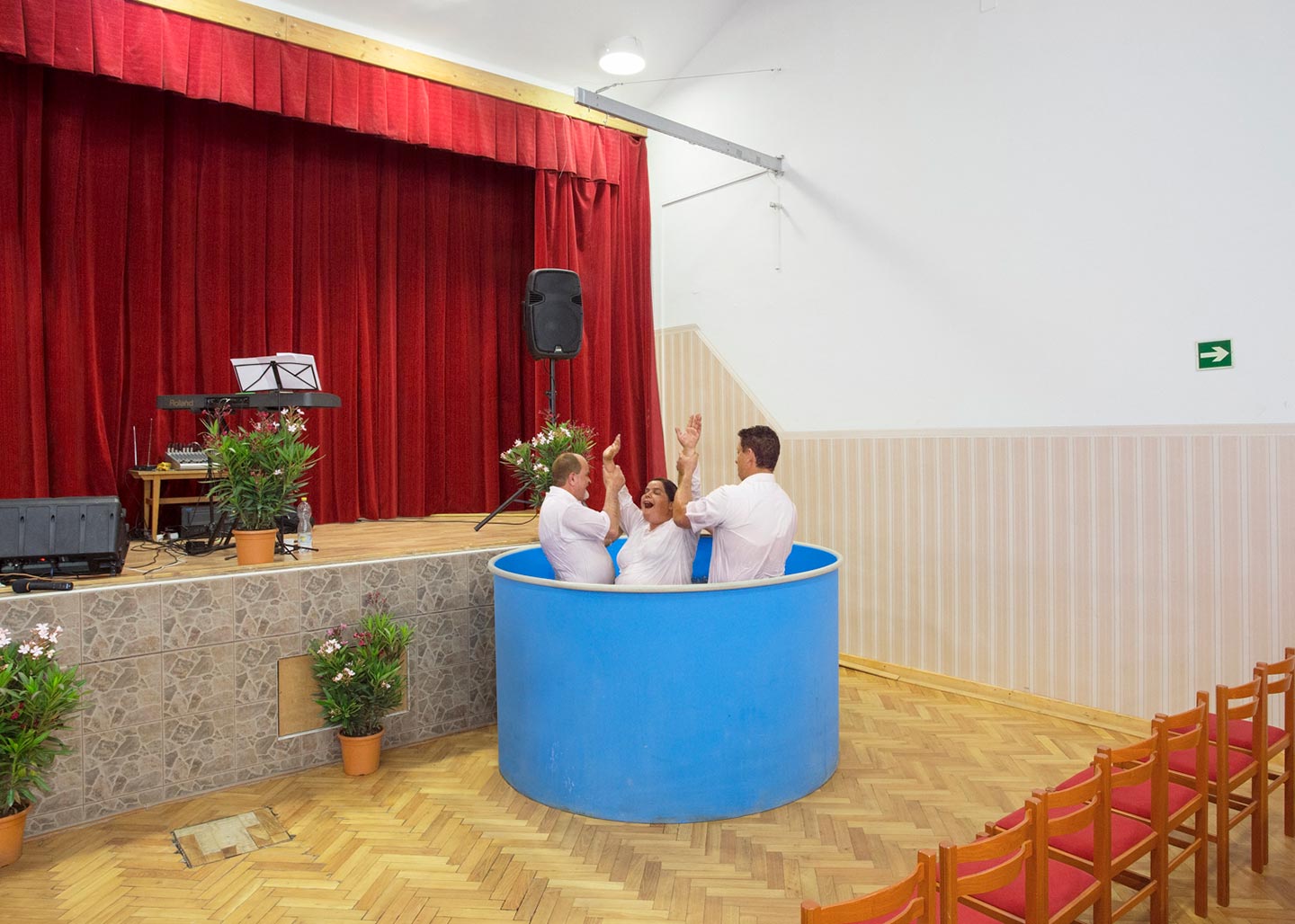 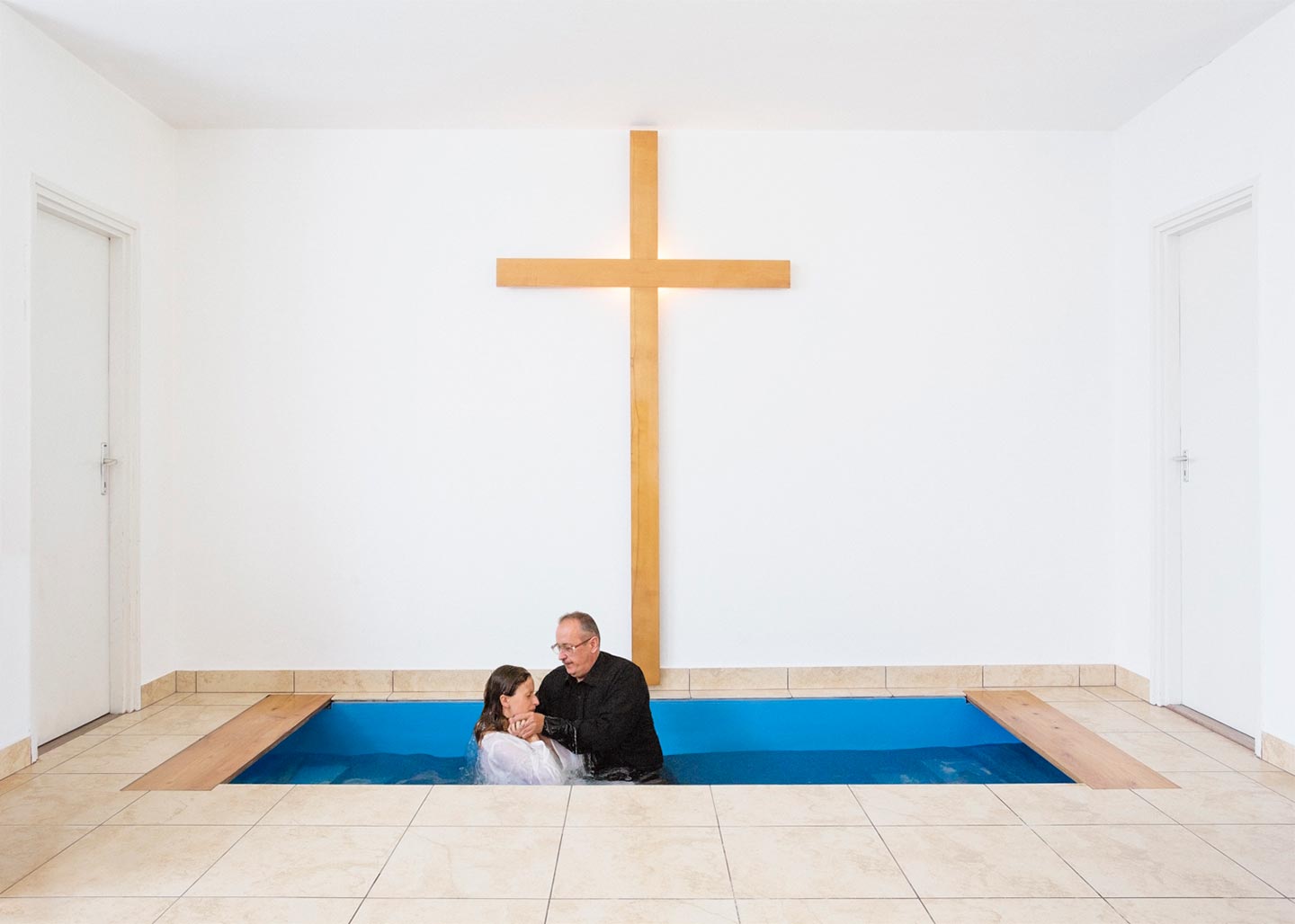 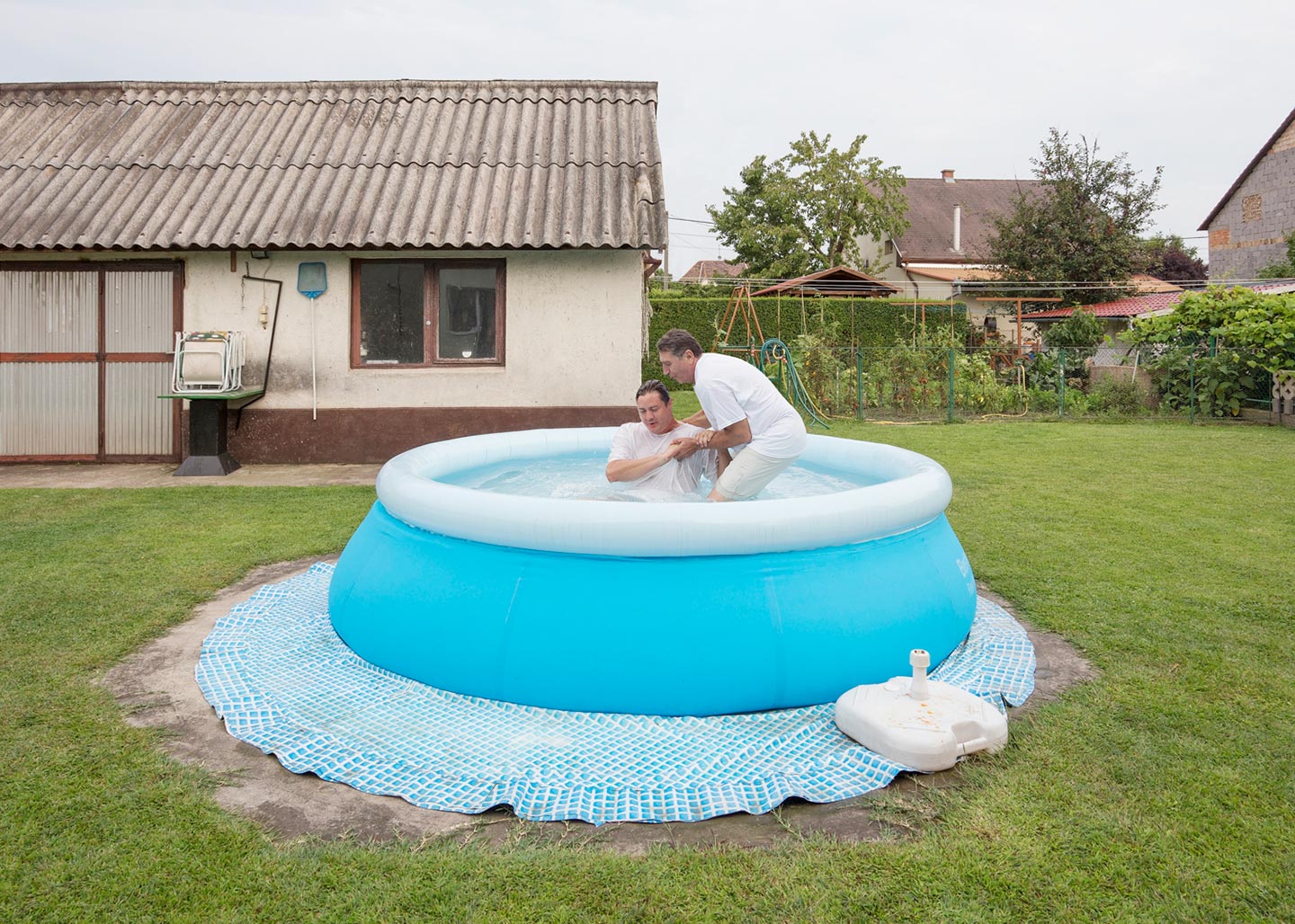 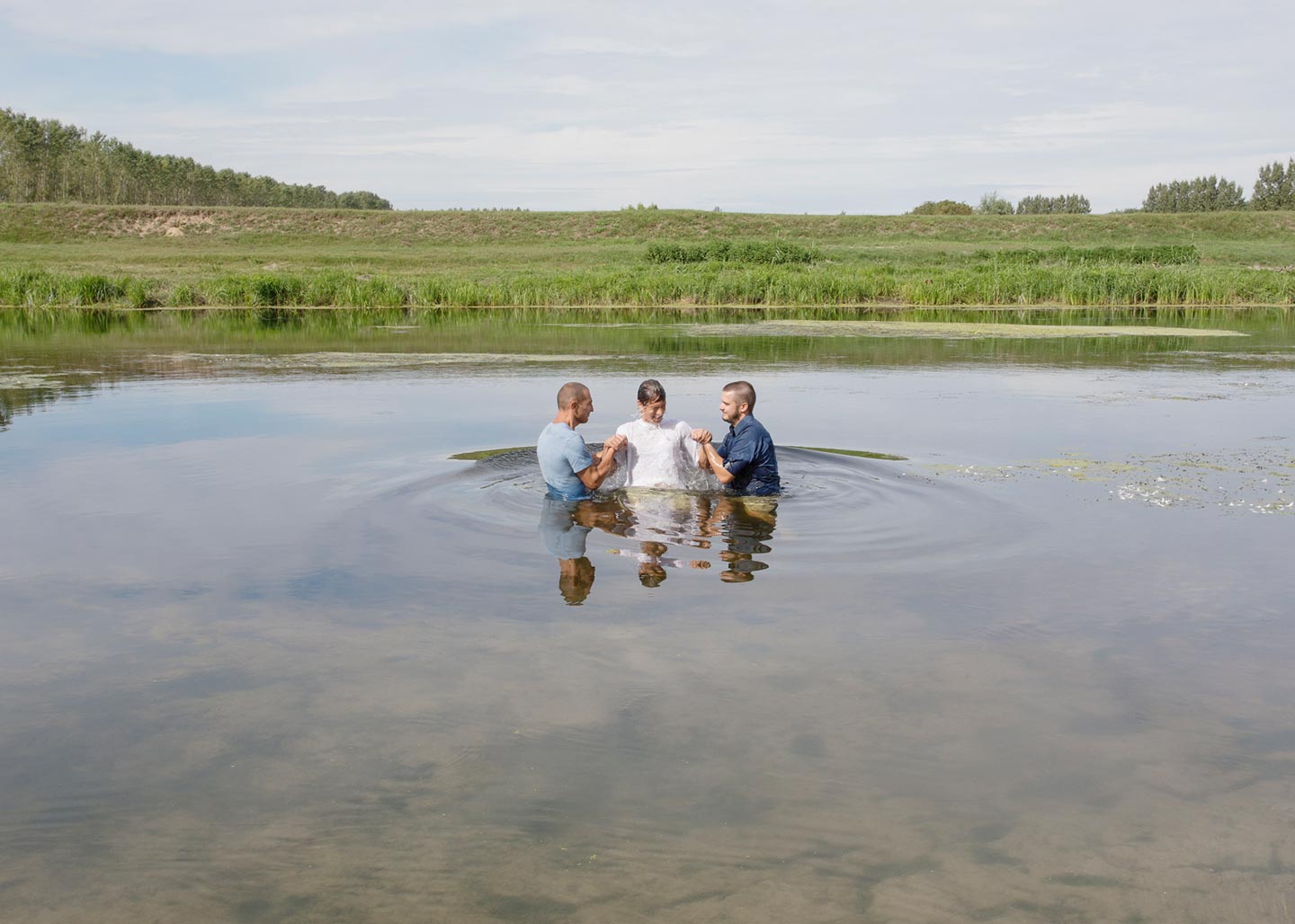 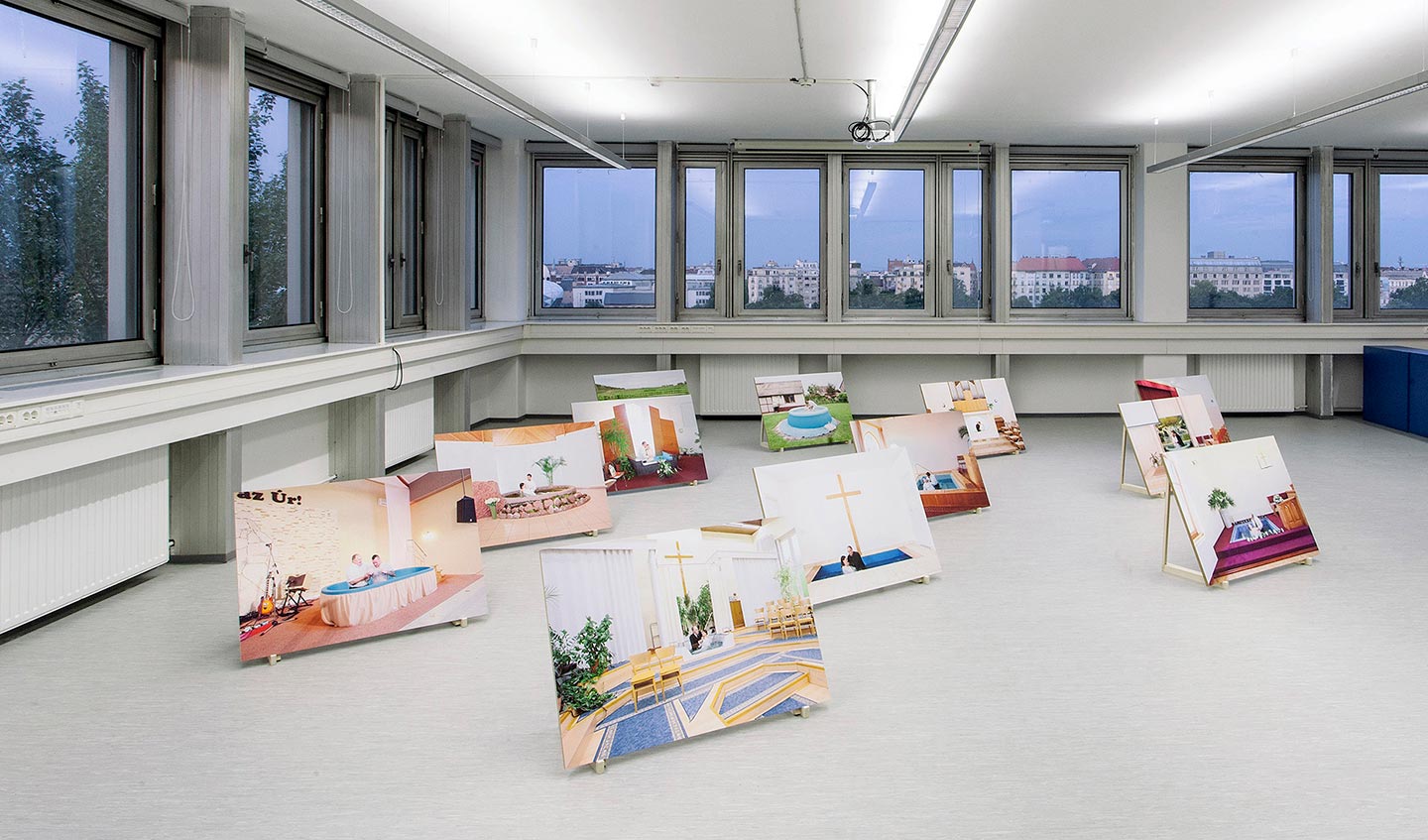 Furnishing the Sacred by 24 year-old Hungarian photographer Boglárka Éva Zellei is a series of images that document the immersion baptism that new members go through to join the Christian communities she visited for this project, and the differences in the baptism ritual that exist across these groups. “Although immersion baptism is a two-thousand-year old form of christening, every church practices it in its own way,” Boglárka explains. “The thing I find most interesting is how they organize and furnish the space that the baptism takes place in. Tradition blends with contemporary taste and unique approaches, everyday objects are arranged in new ways and get new meanings.”

The photos were taken in relatively young and small Christian churches professing a range of branches of Christianity, from Baptism to Adventism, from Pentecostalism to Free Christianity. “I was brought up in one of these communities, but when I was still a child my family joined a Calvinist church. Recently I became interested in the visual culture of Christianity, and when I came across these small religious groups I could see that they don’t strictly follow the Christian traditions, but rather tailor the interiors of their churches to fit contemporary needs. Particularly with regards to immersion baptism, I was amazed by the creative and sometimes absurd ways they furnish the space of the ceremony. I was looking for a way to visually explore a deep and life-changing relationship with God, and I found it in immersion baptism.”

Boglárka looked up such religious communities online, then wrote an email to the pastor or leader of each group. “Most of those who answered were very kind, and proudly invited me to their next event. When I visited, they were really open and sometimes extremely generous—in most cases they showed me every detail of preparing the ceremony. At the time of shooting, I always tried to capture the most important moment of the ritual: when the baptized emerge, sometimes like newborn babies, and the water fades the contours of their bodies. This moment symbolizes the birth of their new life.”

“The human subjects are always at the center of each image, assuming an almost symbolic and timeless quality, but the environment around them is always different and embodies the various contemporary approaches of the individual churches. I composed all the images in the same way in the hopes that, ideally, those who see it will compare them with one another and examine how the differences in the interiors affect their understanding of the ceremony and the people involved. My aim was to keep a balance between the fragile intimacy of the human figures and the descriptive representation of the environment.”

So far, Boglárka received mixed feedback about Furnishing the Sacred: “I’ve seen surprisingly different reactions to the pictures. Some people said they found them sarcastic (which wasn’t my intention); others only appreciated the intimacy of the ceremony. Initially I was confused, but now I’m fine with it because I shot the images with the same, straight-forward approach precisely to encourage a reaction from the viewer.”

Boglárka’s main photographic reference for Furnishing the Sacred was a successful 2014 photobook by Nicoló Degiorgis called Hidden Islam, a series of images of temporary, non-sacred places where Italian Muslims pray due to a lack of mosques in Italy: “I really like how the book combines the makeshift nature of these places and how they contribute to portraying the Muslim community.” For influences on her photography in general, beyond the specific case of Furnishing the Sacred, she mentions the Broomberg & Chanarin photography duo: “Their works inspire me to experiment with mixing documentary and conceptual photography. I’m also influenced by non-photographic practices like installations, collages and do-it-yourself techniques, but I’m still working on how to incorporate them into my photography. My creative process usually includes reading a lot to enrich my view on the subject at hand—visual anthropology, philosophy, religious studies, sociology and art history often provide a basis for my projects.” Some of her favorite contemporary photographers are Broomberg&Chanarin, Nicoló Degiorgis, Rinko Kawauchi, Geert Goiris, Erik Östensson and George Georgiou.