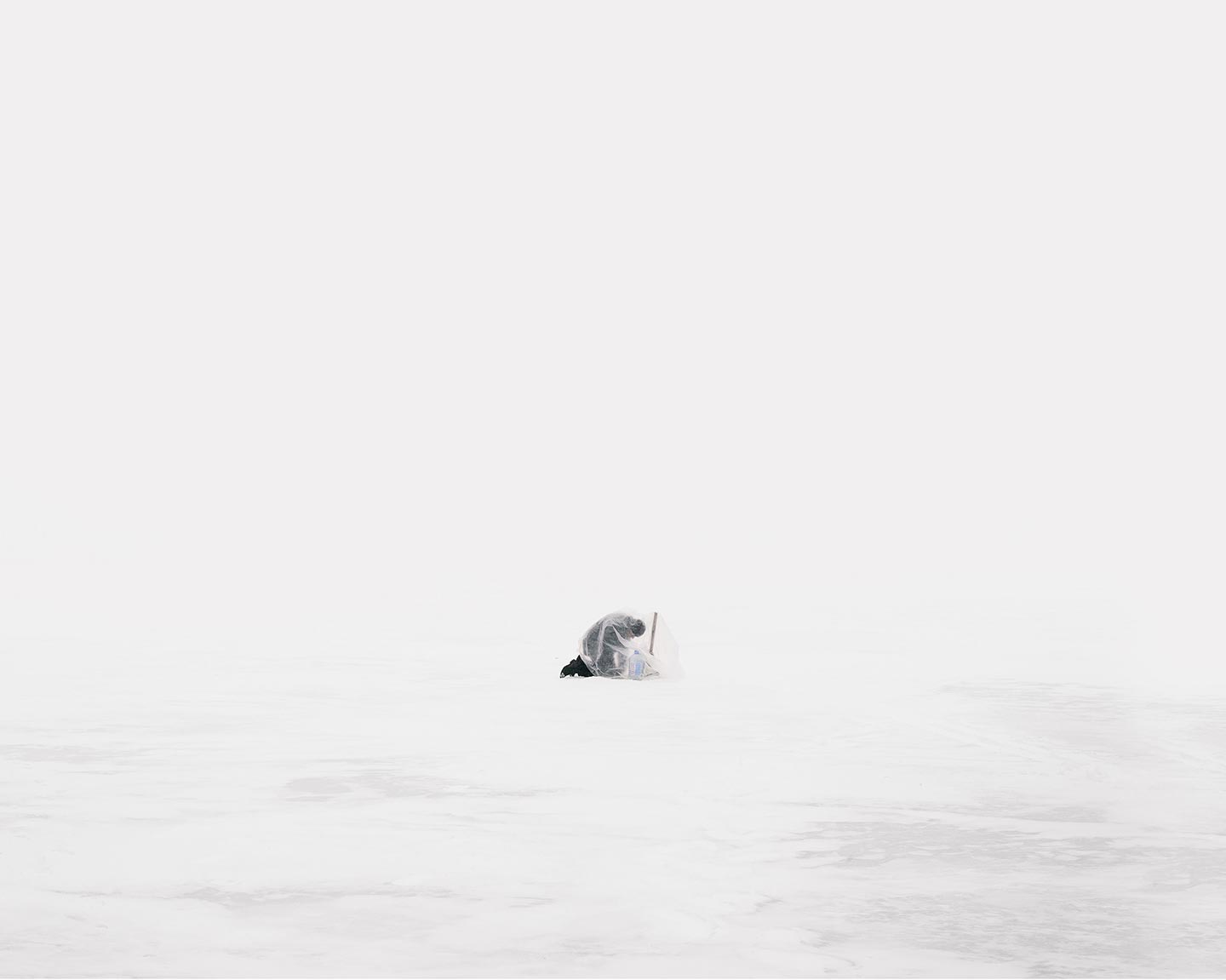 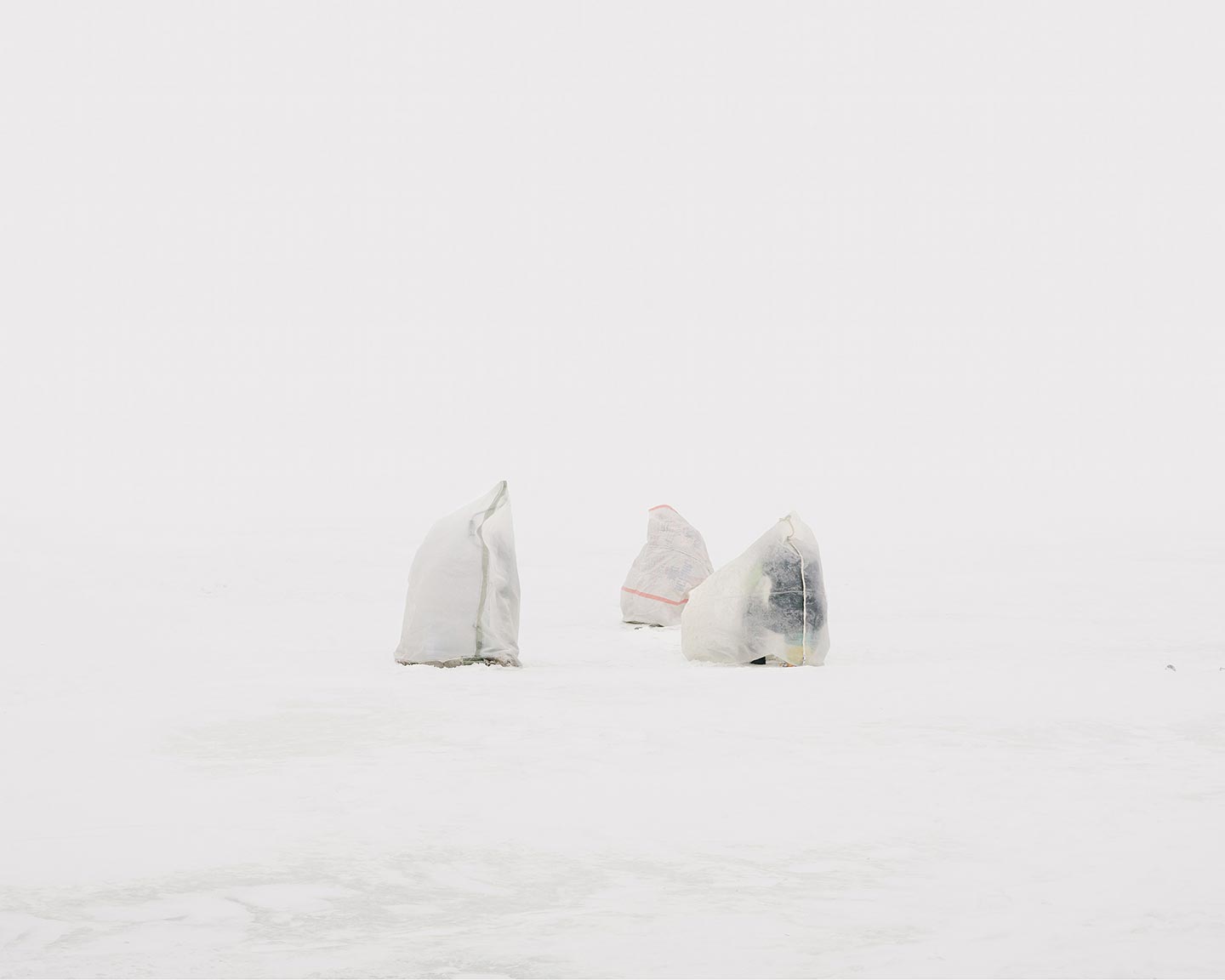 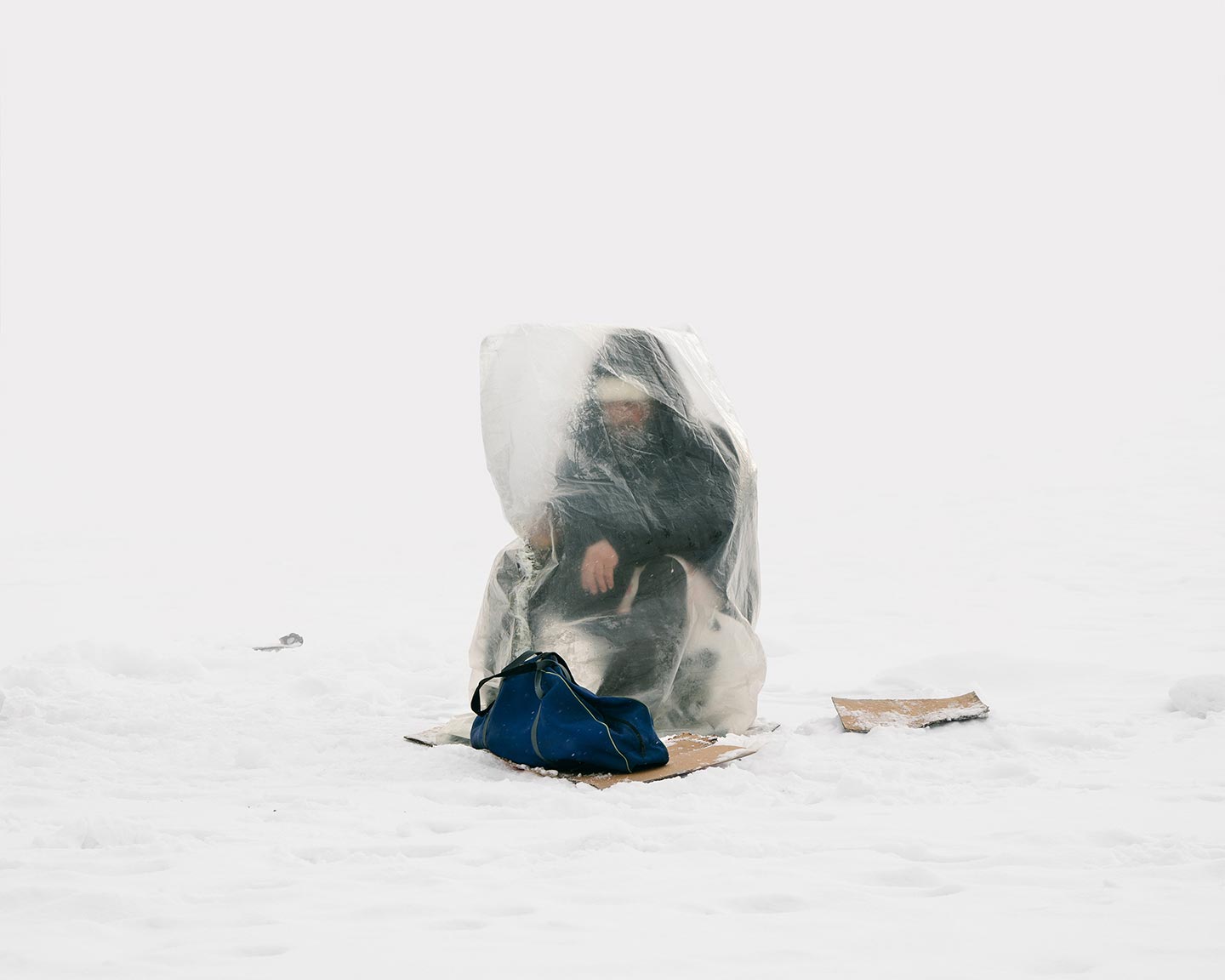 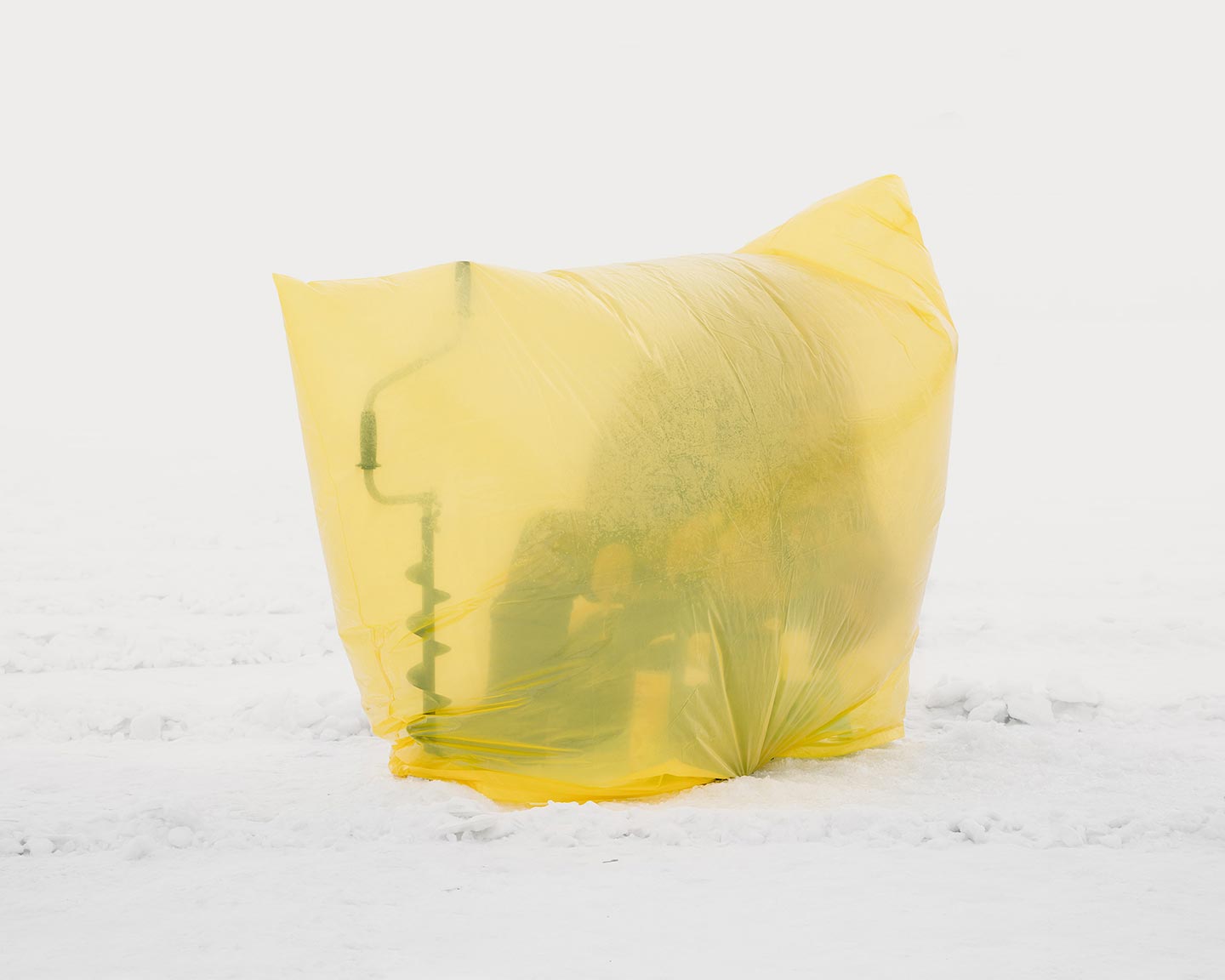 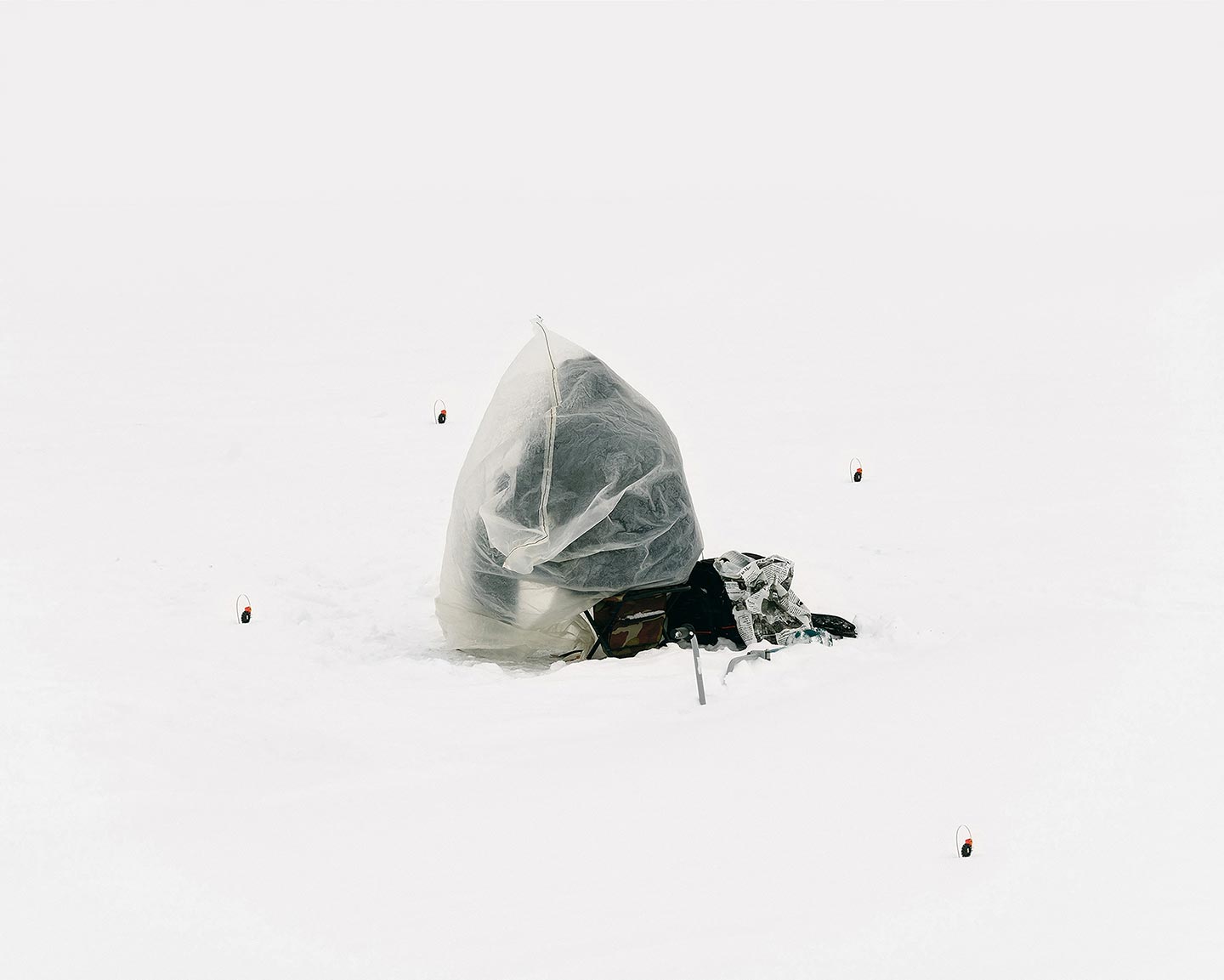 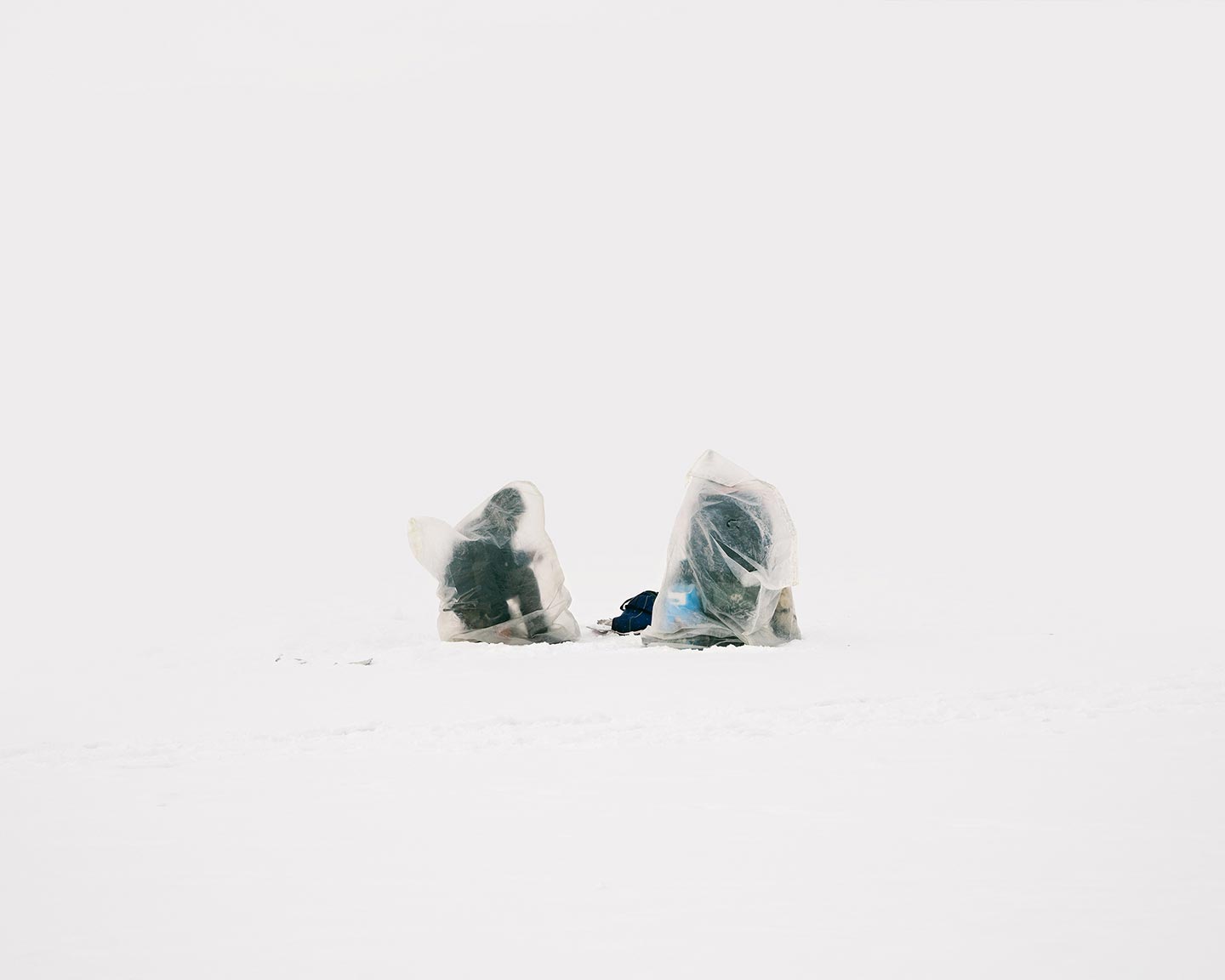 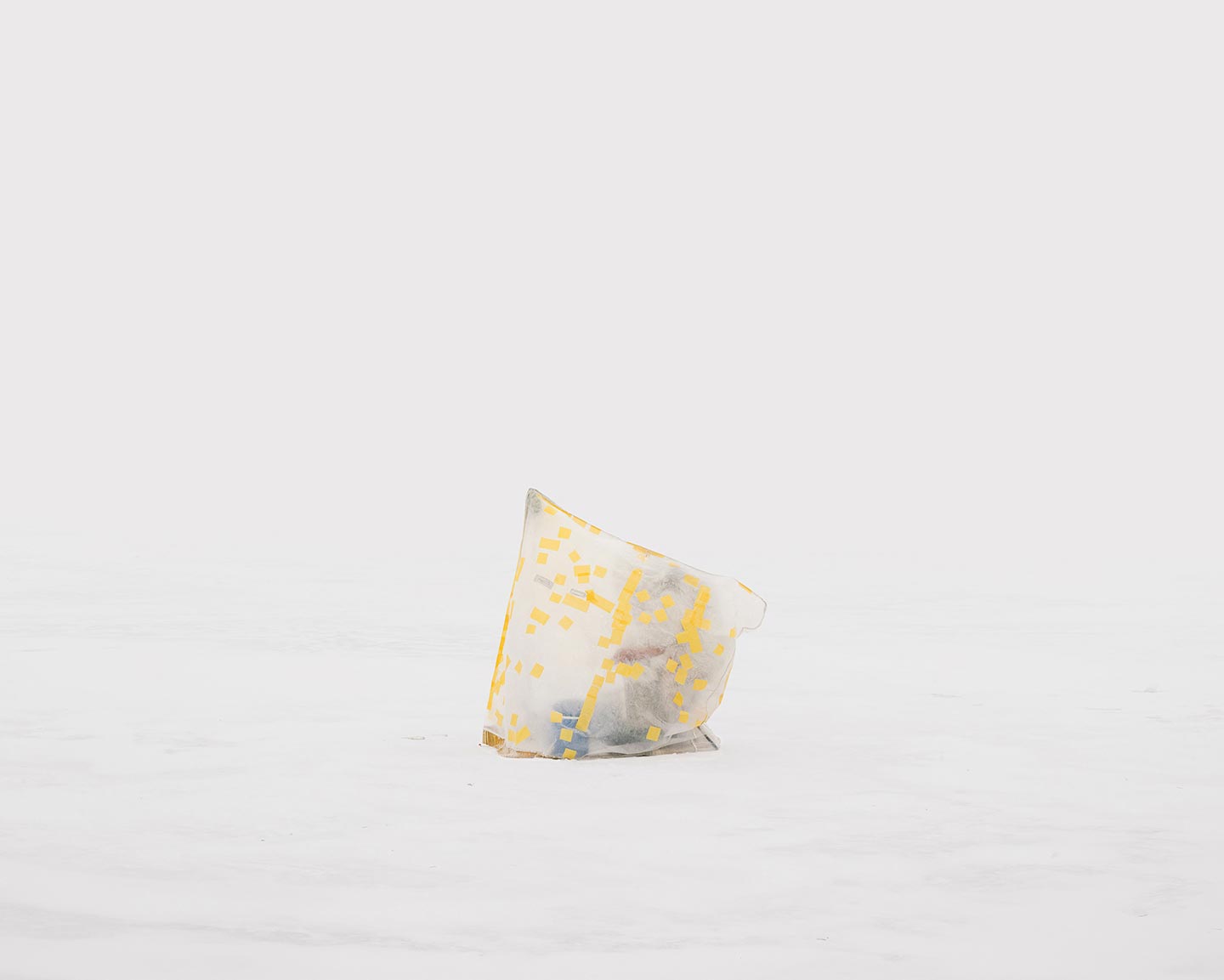 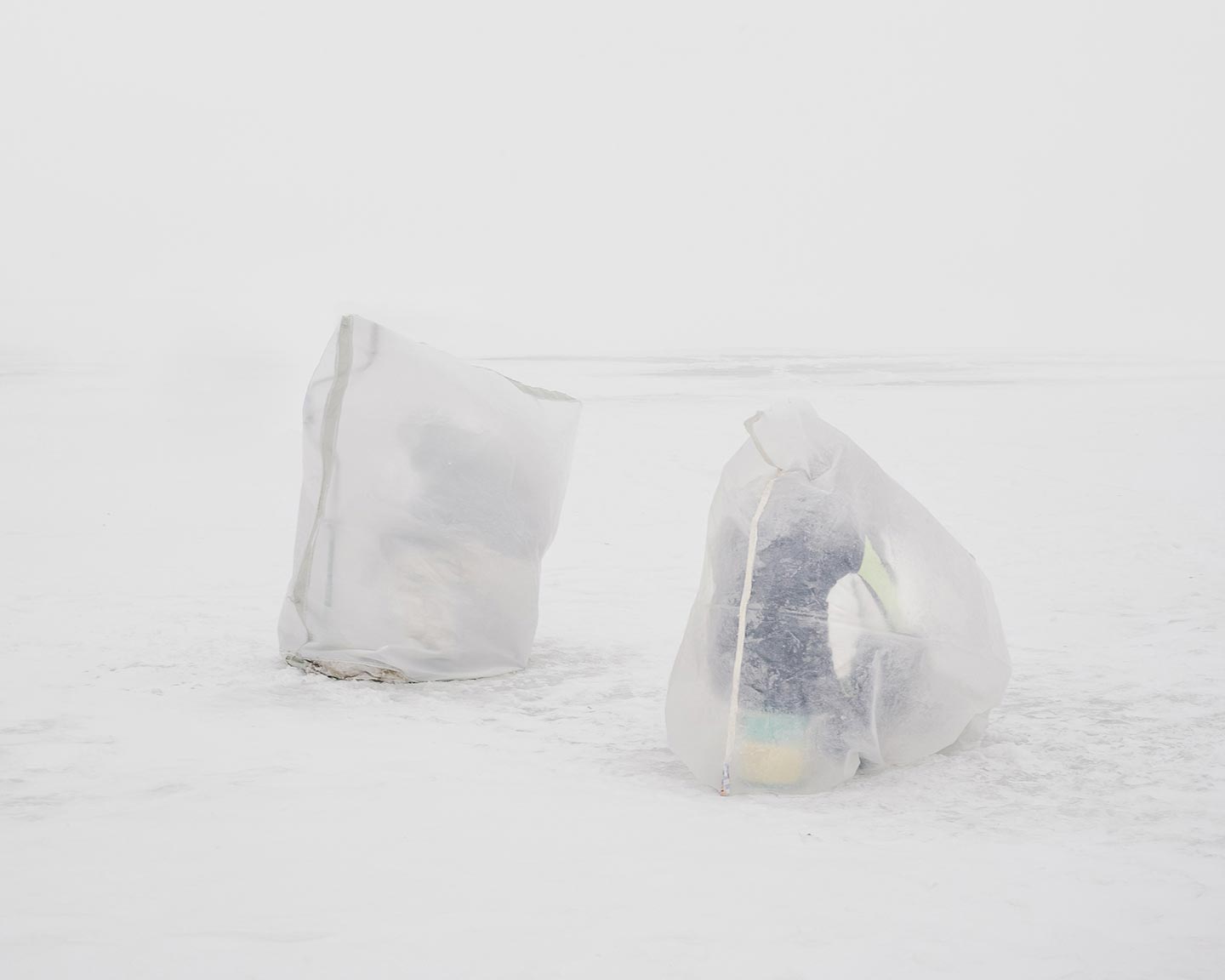 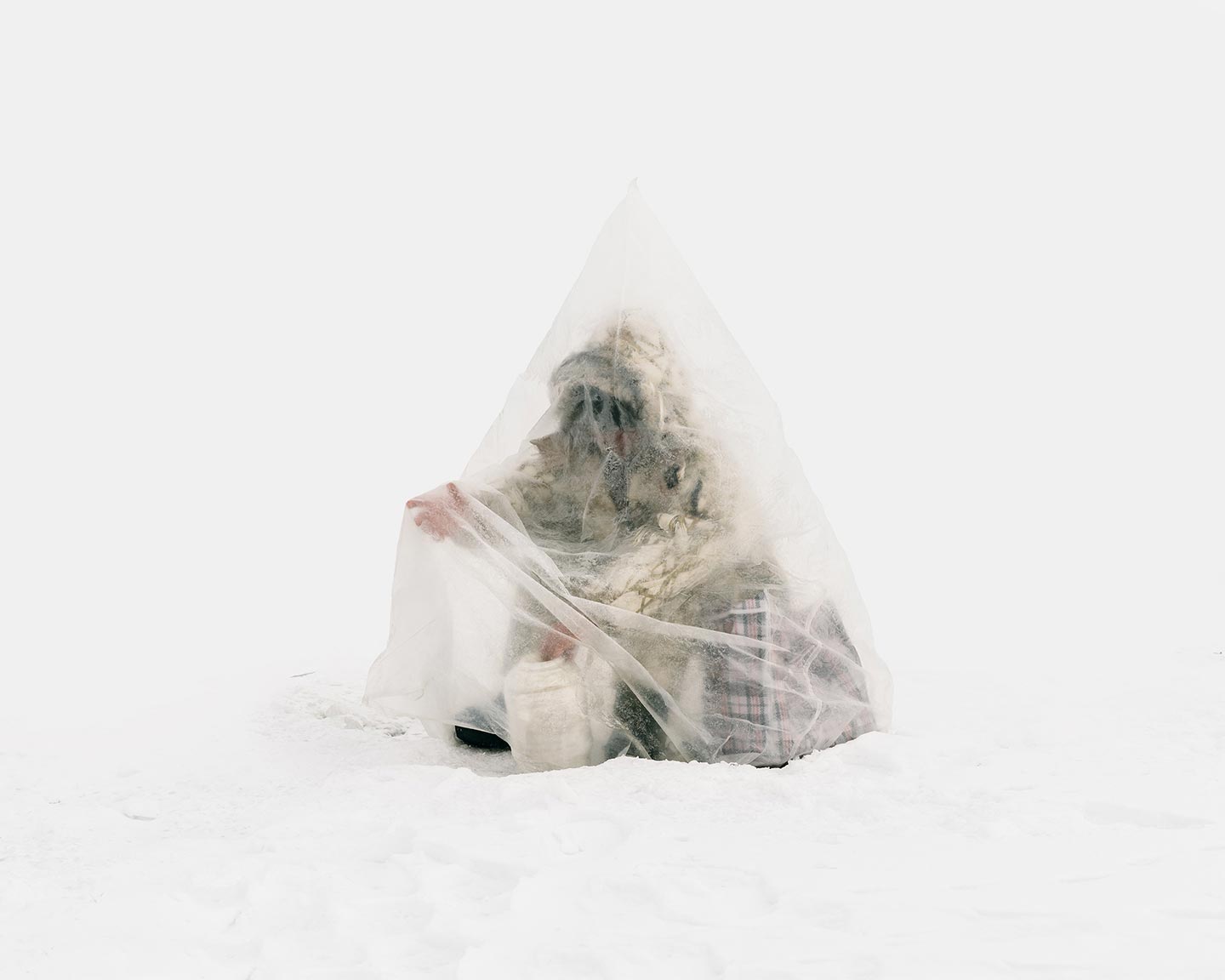 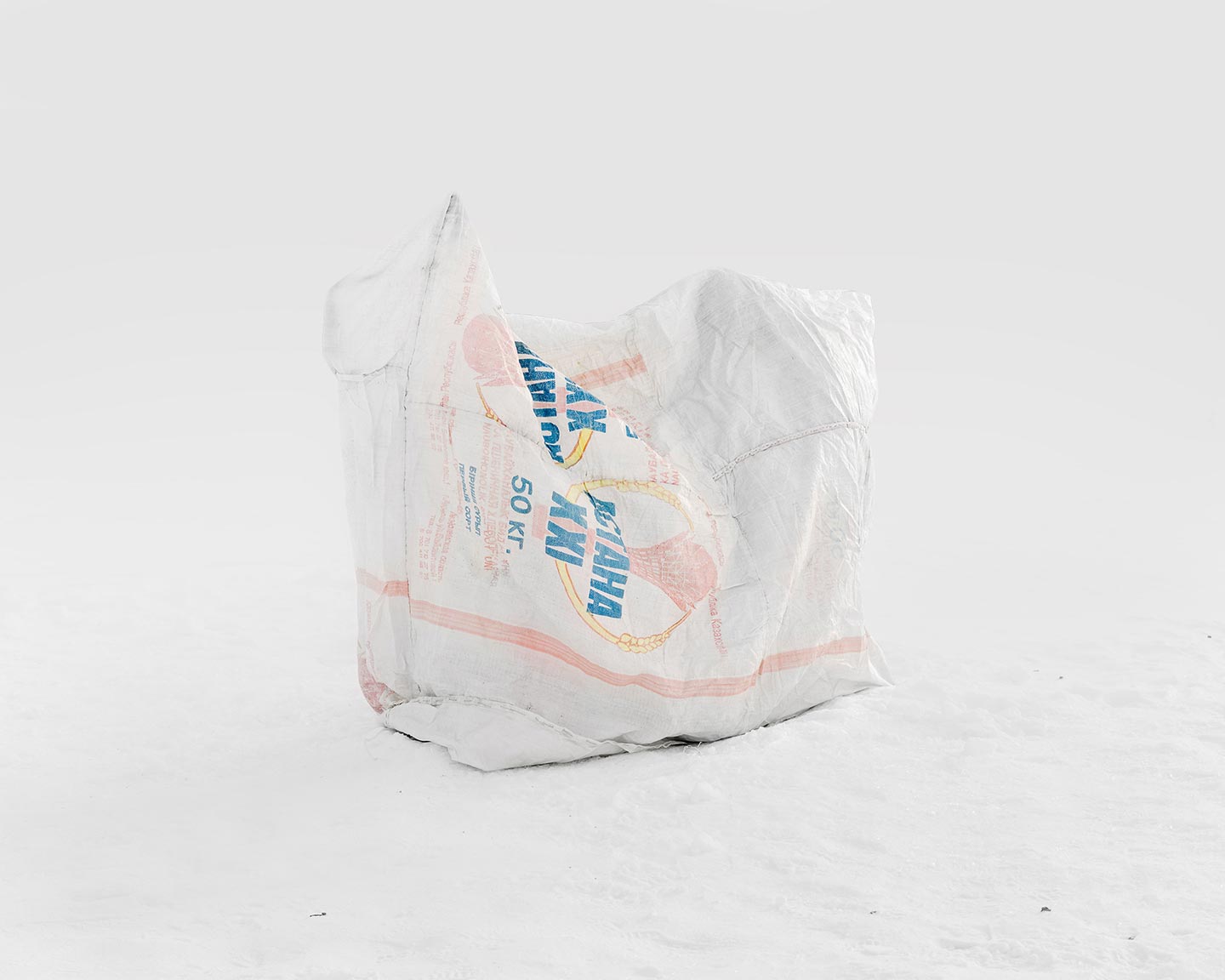 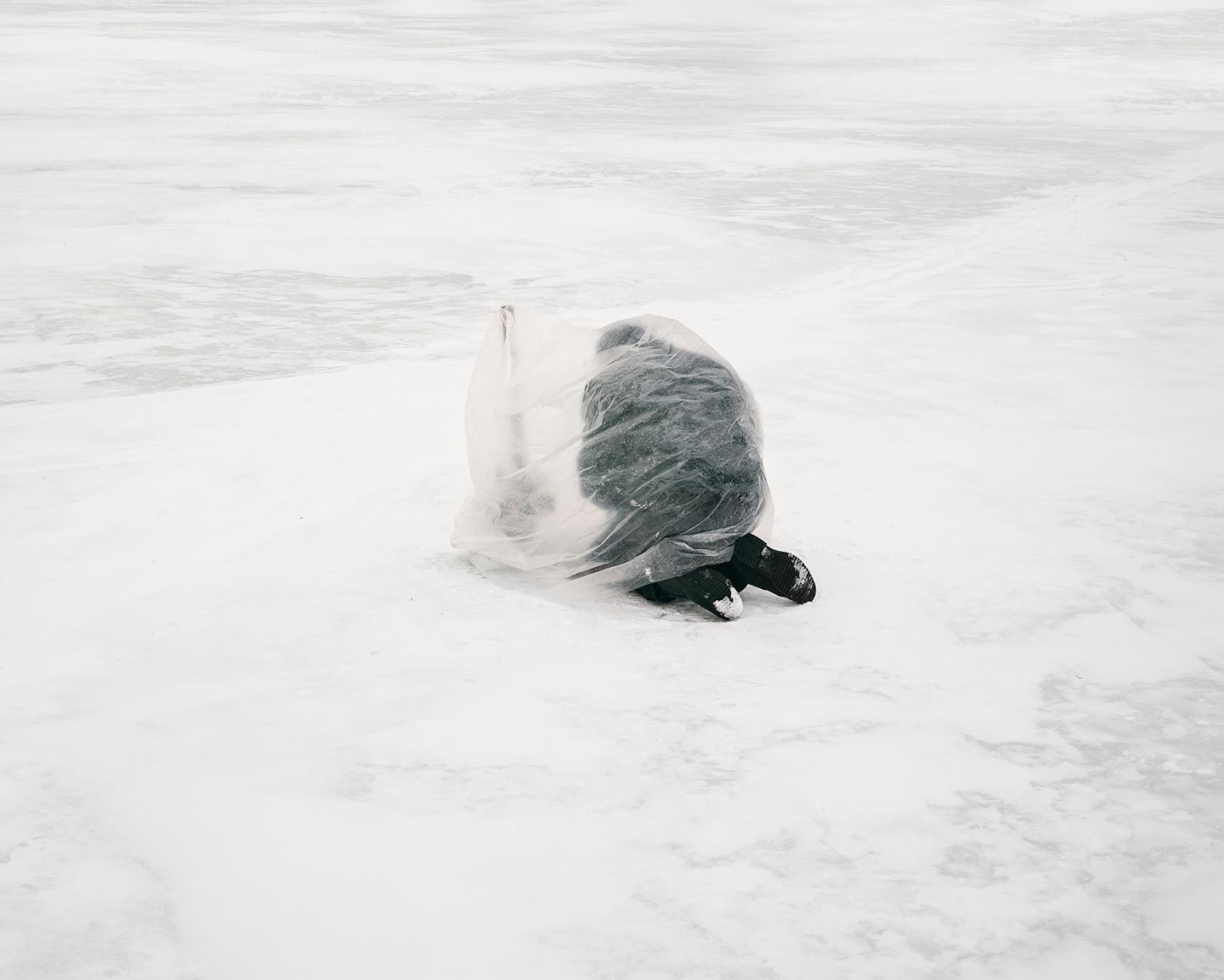 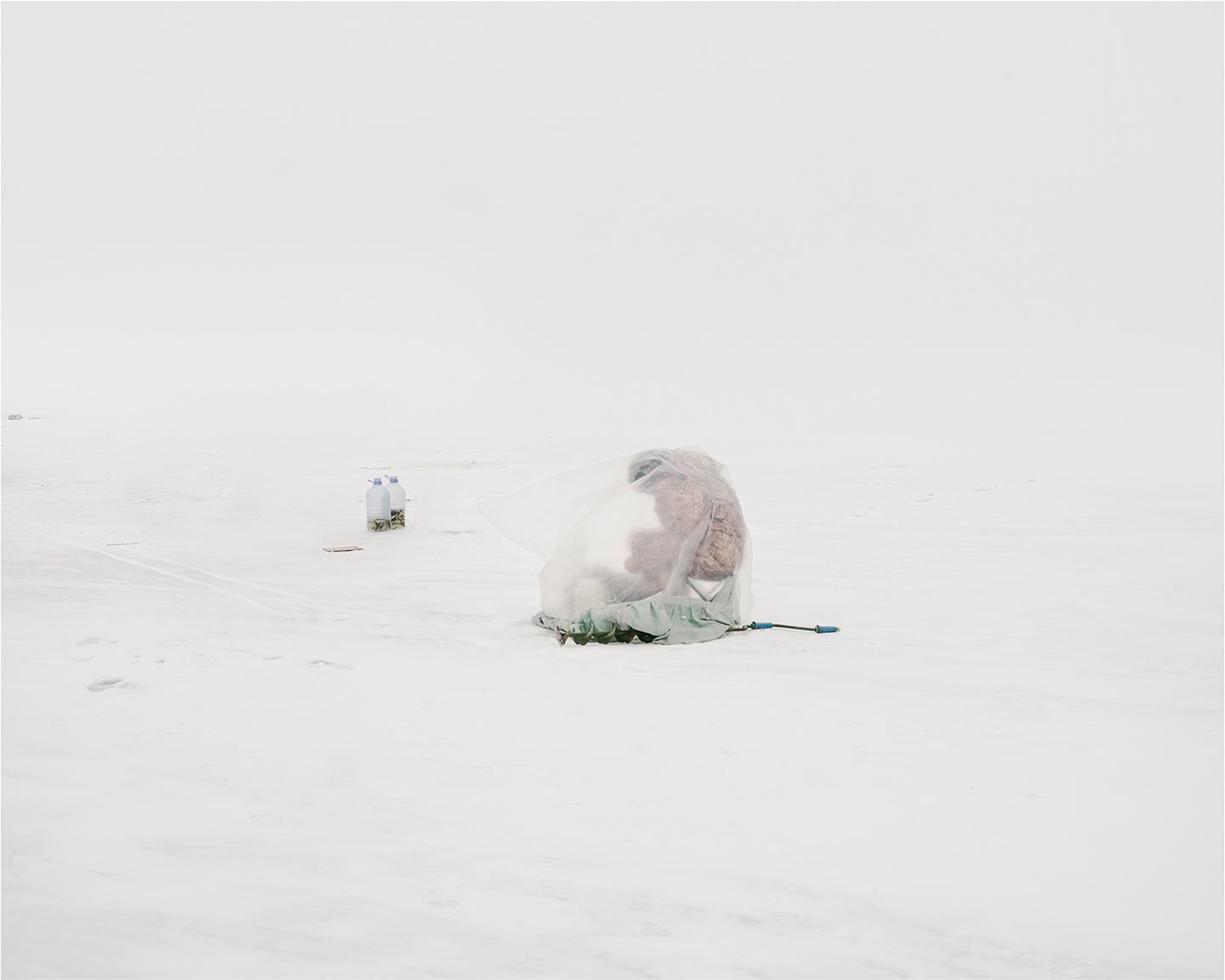 Art is everywhere—you just need to look for it. For instance, 23 year-old Kyrgyz photographer Aleksey Kondratyev was fascinated by the sculptural quality of the Kazakh men who use plastic bags to shield themselves from the cold as they catch fish under the ice. Their dark silhouettes, in stark contrast with the surrounding ice and slightly blurred by the transparent plastic, create interesting forms that transcend the documentary content of the images.

Hello Aleksey, thank you for this interview. What are your main interests as a photographer?

For the past few years, my interests have varied but all of my work has in some way dealt with themes of globalism and the way in which seemingly disparate parts of the world overlap one another. With this project I was also interested in the intersection between sculpture and the photographic image, and what portion of an image is constructed versus recorded.

Please introduce us to Ice Fishers: where did you take the photos, and how did you find out about these fishermen?

I took these photos on the Ishim River which bisects Astana, a high-rise futuristic city in Kazakhstan that was built essentially from scratch in the 1990s, when Kazakhstan started profiting off its oil reserves. I came across the fishermen when I was traveling through the former Soviet republics of Central Asia working on a different body of work. The following year I returned to Kazakhstan and spent a month focusing solely on the ice fishers.

Do the fishermen use these sort of plastic tents to protect themselves from the cold? Does it really help?

The fishermen find these bags—which are re-appropriated plastic, trash and rice bags—and patch together makeshift tents from the material. Astana is the second coldest capital city in the world after Ulaanbaatar in Mongolia, and temperatures frequently fall below -30 C/F. The bags keep the fishers warm in two ways: by acting as windbreakers, and also by keeping their warm breath trapped inside the plastic.

For how long a day do they usually remain underneath the plastic?

Most of these guys will be out for five to eight hours.

Looking at your images, you seem less interested in the practice of ice fishing and more in the aesthetics of the plastic tents. Can you talk a bit about your approach, and what did the fishermen look like to you?

I was more interested in examining the material and aesthetic forms of these improvised protective covers and the way in which they functioned as inadvertent sculptures. I was also interested in the role of agency in the photographic image, and what part of this work is a reflection of decisions that I made as a photographer versus choices that my subject made. In the end, the work was collaborative in the sense that the final images were influences by utilitarian decisions that the fishers had made on their part.

Did you have any specific references or sources of inspiration in mind while working on Ice Fishers?

At the time I was looking a lot at sculpture, particularly Eva Hesse and Robert Morris. I was interested in the idea of letting the nature of the materials dictate the form of the work, and I tried to keep this in mind when working on Ice Fishers. Rodney McMillian is another, more recent artist whose work I thought a lot about during this time.

Colors magazine was an important influence, especially the later issues which Patrick Waterhouse directed. Recently I’ve been finding inspiration outside of visual art, particularly in literature. Ben Lerner is an author whose prose has helped shape the way I think about art.